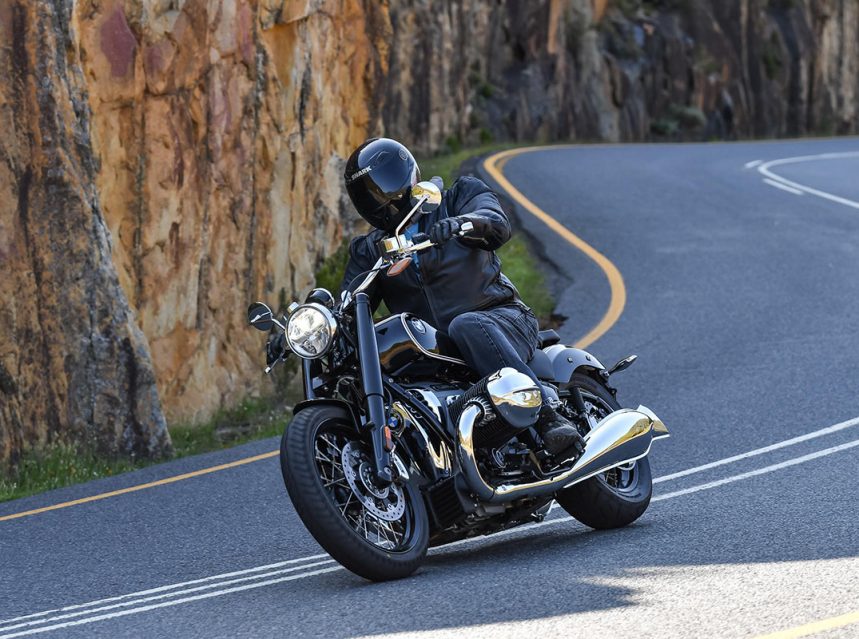 There is a saying that you do not mess with a winning combination and, for the best part of a century, this has been the mantra BMW motorcycle designers have largely followed. For them, design revolves around three basic elements – black, low centre of gravity, and a boxer engine – and they have been right a lot more often than not. Their latest offering, the 1,800 cc R18 cruiser, is (in a sense) a paradox in that it is an experiment based on these traditional elements.

The very first motorcycle built under the BMW Motorrad name was the 486 cc R32 in 1923 and – surprise, surprise – it was black, low-riding, and powered by a boxer-twin. Interestingly, it had a top speed of 100 km/h, and now – 97 years and aeons of automotive technology and engineering advancement later, not to mention road quality – the R18 top-end mark on the speedo is 200 km/h. For the main part, Motorrad has been about reliability rather than speed.

Let us talk two motorcycling concepts: “heritage” and “cult”. Reliability is the cornerstone of the first because you cannot build a heritage around things that fall apart two weeks after the warranty of the manufacturer expires. Good looks help to give a bike long-lasting appeal but they are not essential.

Where “heritage” is an objective concept, “cult” is completely subjective. Cult bikes can attract a following for all the wrong reasons; consider the Kawasaki “Widow Maker” (buy one, get a coffin free!), the original Suzuki Katana, or almost any Indian.

Others achieve cult status because of extreme performance and/or very limited production runs. I suspect that the BMW R18 will, in time, straddle both worlds. It will become a “heritage classic” (alongside, for instance, the Harley-Davidson Softail).

Boxer engines are almost indestructible and are generally low maintenance. One of the reasons there are so many of them left on the roads of the world is that they are not built for speed-freaks, so there is little chance of backyard mechanics buggering them up with performance modifications.

The R18 has a lot of things going for it: power, ride quality, and looks (they grow on you) to name a few. I would add “rarity value” because, even though almost the entire 2020 allocation of 65 bikes for South Africa has already been sold, and Motorrad SA hopes to sell about 30 of the bikes per month next year, I think it responds to a market niche that will be quickly saturated.

It is neither a “boulevard” cruiser nor a touring bike in the generally accepted sense. In the first instance, it is too good a ride and, in the second, its range is too limited (with only 16 litres in the tank, you will be lucky to get 300 km between fuel pumps).

So, if the long road is out of the question and opportunities for attracting gooey-eyed biker groupies is limited to flashing the R18’s bling (there is a lot of it!) parked outside the swish coffee shops of Cape Town, what do you do with it? Well, you thrash it around the amazing roads of the Western Cape over weekends – and that is exactly what we did at the launch in Stellenbosch late last year.

We were a very sceptical group of biking writers who gathered at the historic Lanzerac estate for two days of riding but, at the end of them, none of us had any doubts that we had had an inordinate amount of fun in an entirely unexpected way. We thought the bikes would be clunky and clumsy, but they certainly were not – Looks, in this case, were utterly deceiving.

Superb balance negates the sheer size and weight of the R18. The six-speed gearbox is deceptively slick for such a retro-looking machine but, best of all, there is 150 Nm of torque available from 2,000 to 4,000 rpm. This allows you to go into corners and bends “hot” but accelerate out of them without drifting wide if you are in too high a gear. (Be prepared to scrape the foot-pegs, though: the R18 gets down lower than you could imagine.)

In this sense, the R18 is a very “forgiving” motorcycle even if you do not know it well. BMW Motorrad bills the 1,802 cc engine as “the biggest boxer ever”. True, but they do not tell you that the R18 has a hell of a lot more going for it than Max Schmelling ever did!