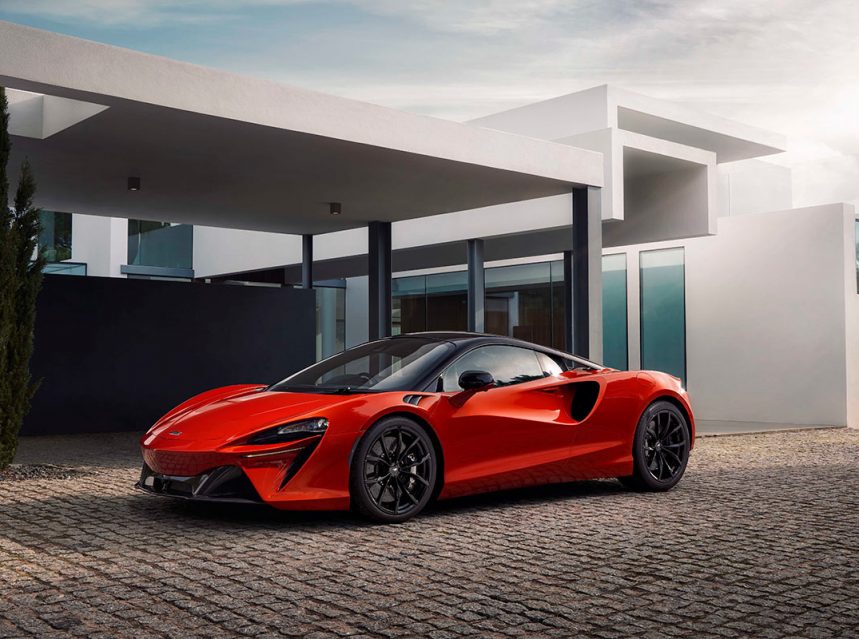 MCLAREN JOINS THE CHARGE OF THE HYBRID BRIGADE |

The launch of the new Artura marks the beginning of a new chapter for McLaren as it (somewhat belatedly) joins the growing ranks of the hybrid hypercar brigade. And while at first glance it may look like many of its precursors, it is new from the ground up, according to the luxury supercar company.

More than half a century of racing and road-car experience and expertise was focused on this first series production next-generation High-Performance Hybrid (HPH) supercar from Woking. The result: a distillation of all the attributes inherent in a McLaren with the additional benefits of electrification.

The Artura – the name means “noble” and is related to King Arthur of the knights of the round table fame – sort of serves as a replacement for the Sports Series line of McLaren supercars (the 540C, 570S, 570GT, 600LT and 620R) but, unlike its predecessors, shifts away from a numerical power output moniker. Previously, McLaren only reserved nameplates for its hypercars, such as the Senna, Speedtail and Elva.

Underpinned by Woking’s new McLaren Carbon Lightweight Architecture (MCLA), the Artura is endowed with a compact HPH powertrain system (the total weight of the hybrid components is just 130 kg and includes an 88 kg battery pack, 15.4 kg E-motor and lightweight cabling for the systems), resulting in a claimed kerb weight of only 1,498 kg.

The Artura presented McLaren engineers and designers with new opportunities to innovate, and this they did. Designed and manufactured at the McLaren Composites Technology Centre (MCTC) near Sheffield, it has a dry weight of 1,395 kg, which puts it on par with comparable supercars without hybrid powertrains, despite its 130 kg of hybrid components.

According to McLaren, the 120° v-angle of the engine makes it possible to position the turbos within the “hot vee” to reduce pressure losses through the exhaust system. It is designed to run with a gasoline particulate filter to optimise emissions. Working in harmony with the V6 is a compact axial flux E-motor located within the transmission bell housing.

Smaller and more power-dense than a conventional radial flux E-motor (its power density per kilo is 33% greater than the system in the McLaren P1), this unit can generate up to 70 kW and 225 Nm of torque, giving instantaneous twisting force – known as ‘torque infill’. The E-motor is powered by a battery pack offering a usable energy capacity of 7.4 kWh and a claimed pure EV range of 30 km.

The dual propulsion systems are integrated via an engine disconnect clutch, driving a new, twin-clutch (SSG) eight-speed transmission with electronic locking differential (E-diff) developed specifically for the Artura. While it has an extra ratio, the lightweight gear cluster is 40 mm shorter in length and requires no reverse gear as the E-motor takes care of reversing by rotating in the opposite direction.

This drivetrain combination gives the Artura, designed with full plug-in hybrid (PHEV) capability, exhilarating performance. The 0-100 km/h sprint is achieved in a claimed three seconds, the 0-200 km/h dispatched in 8.3 seconds, and the 0-300 km/h done in 21.5 seconds. Oh, and its top speed is limited to 330 km/h.

The artistry beneath the Artura’s skin is complemented by its low-nose, cab-forward exterior design with a high-tail stance. This is complemented by the signature dihedral doors and further enhanced by a short wheelbase and low stance – giving the car a sort of ‘shrink-wrapped’ appearance.

Key to the Artura’s driveability and driver engagement is McLaren’s first-ever use of an E-diff to independently control torque across the rear axle. The innovative rear suspension system and wider tyres maximise vehicle stability and precision. Dynamic precision is further enhanced by Pirelli Cyber Tyre technology, with Proactive Damping Control supporting its good ride characteristics.

Carbon-ceramic brakes and lightweight aluminium callipers (as featured on the latest LT models) provide outstanding braking performance. Driver comfort is increased with the new Clubsport seat, which combines the range of motion of a moveable backrest with the lightweight and support of a bucket seat (McLaren has a patent pending on this seat).

In its home market, the Artura is priced from £185,500 (about R3.8 million, before levies and taxes) for the standard specification. Performance, TecLux and Vision specs are also available.