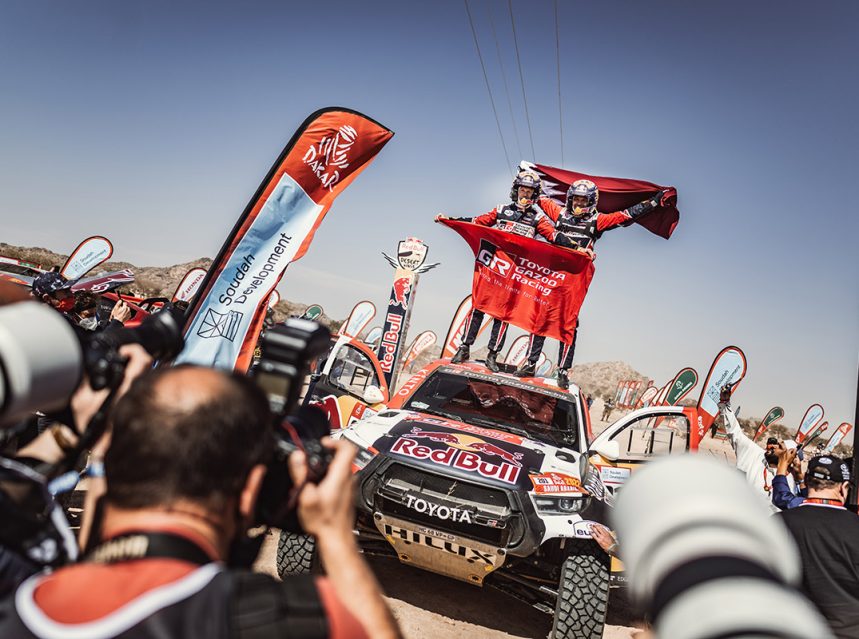 In over a decade of participation, the Toyota Gazoo Racing team this year arguably delivered its most convincing performance to ensure a triumphant Hilux victory in the gruelling Dakar Rally, courtesy of Qatari Nasser Al-Attiyah and his French co-driver Mathieu Baumel.

With the unveiling of the new GR DKR Hilux T1+, an evolution of Toyota Gazoo Racing’s former specification Hilux – but with bigger wheels and tyres, more suspension travel and an all-new engine (taking advantage of the new dispensation in the Dakar Rally regulations) – it was clear this vehicle had race-winning potential.

Thoroughly developed by Giniel de Villiers throughout 2021, the new Hilux, powered by a 3.5-l twin-turbocharged V6 petrol engine, proved extremely reliable from the start. Also, with 2021 Dakar-winner Stéphane Peterhansel and 2020 winner Carlos Sainz leaving the X-Raid Mini team to race for Audi in the brand new, unproven RS Q e-tron, the most serious challenge to the Toyota-onslaught would come from the Prodrive-run BRX Hunters and locally built Century cars.

However, in the end, it was the measured approach by the experienced Al-Attiyah and supreme teamwork by Toyota Gazoo Racing in the Saudi desert that assured a second Dakar victory for the South African built Hilux. Contrary to previous years, Al-Attiyah and Baumel took a more cautious approach this year, and it paid off.

The pair dominated the event, winning the prologue on 1st January and the challenging opening stage near the city of Ha’il. This stage saw many frontrunners falling by the wayside, including the multiple-time winner, Dakar legend Peterhansel and his Audi teammate Sainz. The pair lost hours in this stage, and while they could continue, both were out of contention for top honours.

This meant Al-Attiyah just needed to control the time gap between himself and BRX Hunter driver and multiple ERC champion Sebastien Loeb. This he did brilliantly by powering his Hilux to victory in Stage 4 and thereafter controlling the pace for the remainder of the event. The battle with Loeb raged on throughout the race, but the Toyota pair never relinquished their 30-minute buffer – driving at a calculated, strategic pace to bring the car home safely in first place, with a winning margin of 27 minutes and 46 seconds.

The victory was also significant for Nasser, as he had previously expressed the hope to win in the Arab world since the Rally Raid first moved to Saudi Arabia. He came agonisingly close in 2020 and 2021 before securing the win this year. Another Arab driver, Yazeed Al Rajhi from Saudi Arabia, and his British co-driver, Michael Orr, came third in their Overdrive Toyota Hilux, one hour, one minute and 13 seconds behind the leaders.

Argentine Orlando Terranova and Spaniard Daniel Carreras in a BRX Hunter came fourth in the car category, followed by Nasser’s South African GR teammates De Villiers and Dennis Murphy. Giniel, taking part in his 19th Dakar, set highly competitive stage times throughout the rally, but a broken oil pipe in Stage 7 cost the crew an hour, and they lost the third position overall. De Villiers pushed on, though, winning Stage 9 outright on his way to fifth position.

Potential for the Future

Henk Lategan and Brett Cummings, taking part in their second Dakar, experienced misfortune on the first stage (sheared wheel nuts) which cost them over three hours. However, the pair fought back, steadily climbing up the leader board and winning two stages outright, including the final dash to Jeddah – again showing their potential for the future.

For their GR teammates Shameer Variawa and Danie Stassen, a rocky start and early nerves conspired against them, but the longer the event progressed, the more confident they became and the better they fared – finishing in 15th position overall in the car category.

The 2022 edition of Dakar was not as good to Century as 2021’s race had been, but Frenchmen Mathieu Serradori and Loic Minaudier did manage to bring their SRT Racing Century home seventh overall, while South Africans Brian Baragwanath and Leonard Cremer achieved some good results, including finishing second on the last stage.

In the motorcycle category, Briton Sam Sunderland won his second Dakar Rally and handed the GasGas Factory Team their first-ever victory in the world’s most iconic rally raid event, while in the truck category, the Russians Dmitry Sotnikov, Ruslan Akhmadeev and Ilgiz Akhmetzianov again tasted victory in their Kamaz Master.

With seven Hilux teams in the top 20, Toyota’s 2022 Dakar campaign was highly successful. Adding a second overall victory to the Toyota Gazoo Racing tally was just reward for the team and its team principal, Glyn Hall. He dedicated the win to the memory of Dr Johan van Zyl, who passed away last year.

“He was a visionary leader and consistent supporter of the Dakar project over many years,” Hall said. “We are extremely proud of what we achieved here this year, and I know the Doc would have been too.”

However, judging by the speed of the electrified Audis in the dunes and on the sandy Saudi plains (when they were running), the newfound reliability and speed of the BRX Hunters and the consistency of the Century cars, the Toyota squad will have their work cut out for them next year. And there will be no time to rest on their laurels.