AN ELECTRIC JOLT TO THE SYSTEM 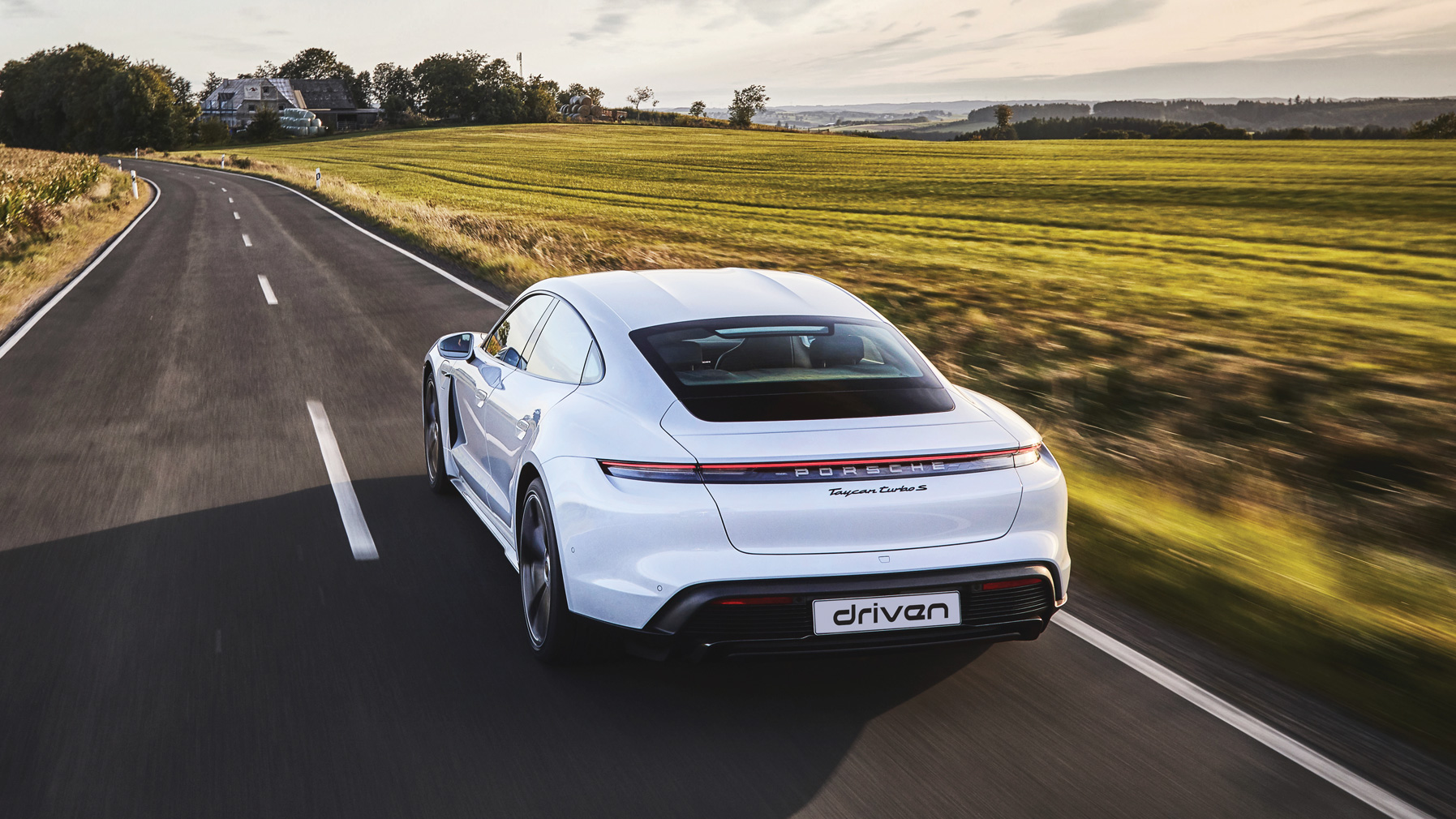 The first car designed by Ferdinand Porsche 121 years ago in 1898 was an electric car, so the history of Porsche begins with the electric drive. The new Porsche Taycan, all-electric vehicle, is an uncompromising sports car in the best of the tradition and spirit of Porsche.  As part of the global introduction of the eagerly anticipated Taycan, Porsche invited 365 members of the world’s media to drive the new Taycan from Oslo to Stuttgart in what Porsche billed as the Taycan Roadtrip Europe.

Breaking new ground in the best Porsche design tradition, the new Porsche Taycan is an emotionally charged, four-door sports saloon. Unmistakeably endowed with the Porsche design DNA, the Taycan’s side silhouette is defined by what the Porsche designers call the “flyline” – the sporty roofline sloping downward to the rear. The highly sculpted side sections are also representative of Porsche’s design philosophy.

At the same time, with its clean and pure approach, complemented with innovative elements such as the Porsche lettering in glass in the rear light bar, the Taycan signals that a new era has begun.

Inspired by the original Porsche 911’s cleanly styled dashboard from 1963, every detail inside the Taycan has been reduced to the essentials. All user interfaces have been completely redesigned and, very impressively, the number of classic controls such as switches, buttons and dials have been greatly reduced. Instead, control is intelligent and intuitive, using touch operation or the voice control function, which responds to the command “Hey Porsche”.

The innovative instrument cluster consists of a curved 16.8” screen with the rounded look that is typical of Porsche and offers four display modes for the instrument cluster. The wing-shaped upper and lower sections of the dashboard stretch across the entire width of the car, with a central 10.9” infotainment display that forms an integrated glass band in a black-panel, thereby blending in visually with the interior.

All vehicle configurations for the Taycan, as well as a host of apps can easily be set via a clearly structured and customisable home screen. Apps include navigation, telephone, media, comfort and Porsche Connect. And for the first time, front passengers in the Taycan have the option of their own touch display, allowing them to easily alter settings without distracting the driver.

The sloping centre console intensifies the feeling of a low seating position, as you would expect from a Porsche. It features a large 8.4” touch panel with haptic feedback, which is a welcome addition to touch screen technology as it allows for “blind” selection of certain controls.

During the historic road trip, we had at our disposal two derivatives of Porsche’s new electric sports car – the Taycan Turbo and the Taycan Turbo S. Both derivatives are fitted with Porsche’s 93.4 kWh Performance Battery Plus, with a range of 450 km for the Turbo and 412 km for the power-hungry Turbo S. Both derivatives are motivated by two permanently excited synchronous motors, front and rear, with a two-speed transmission installed on the rear axle. The first gear ensures better acceleration from a standing start, while the long second gear ensures high efficiency and power reserves even at very high speeds.

Breath-taking acceleration, superior traction and continuously available power output are the basic requirements for a true sports car. The new Taycan meets all these requirements and more. The Turbo S accelerates from 0-100 km/h in a blistering 2.8 seconds and on to a top speed of 260 km/h, while the Turbo posts an equally impressive 0-100 km/h in just 3.2 seconds, and the same top speed as the Turbo S. The Turbo S reaches the 200 km/h mark in just 9.8 seconds, while the Turbo takes 10.6 seconds, placing both four-door, all-wheel drive sedans squarely in the supercar arena.

Linear acceleration and instant torque from the Taycan’s two electric motors makes for devastatingly effective acceleration, whether from 120 km/h or 200 km/h. And unlike most other electric cars, the Taycan can do multiple Launch Control starts from 0 to 200 km/h without the battery overheating or the car going into limp mode.

AS NIMBLE AS A PORSCHE

The Taycan is everything but a one-trick drag strip pony. The chassis of the new Taycan offers a broad spectrum, with the choice between the precise handling of a sports car and the long-distance comfort of a saloon. Porsche uses a centrally networked control system for the Taycan chassis, effectively adding a fourth dimension to the various chassis control systems, including active suspension management, adaptive air suspension, active roll stabilisation and torque vectoring, all of which ensures electronically controlled response times up to four times faster than comparable hydraulic systems in non-electric cars.

As a result, and as we experienced first-hand, the Taycan glided effortlessly and silently through city streets, raked in the miles on the de-restricted autobahn, and exhilarated with its pinpoint accuracy and stability on the winding, undulating roads through the forest of Bavaria. Even in inclement weather, as we experienced on our second day in the hills of Bavaria, the Taycan perfectly demonstrated its all-weather capabilities. On cold, wet, slippery roads through the forests, made even more treacherous by a carpet of fallen leaves, the all-wheel drive Taycan showed that it can cover any ground swiftly and securely thanks to the genius of Porsche engineering. More than anything, the Taycan proved that it is a true Porsche in every way.

Optimised for a combination of street, track and endurance performance, a pre-series production Taycan set a record for four-door, all-electric sports cars on the Nürburgring-Nordschleife in a time of seven minutes and 42 seconds. And to showcase its endurance qualities, a pre-production Taycan successfully completed an endurance run over 24 hours, covering a record-breaking distance of 3,425 kilometres for an electric car as part of a test at the Nardò high-speed track in Italy. In sizzling temperatures, with peak ambient temperatures of 42 degrees Celsius, the Taycan averaged a speed between 195 and 215 km/h. Similarly, a pre-series production Taycan set another record for electric cars as it accelerated from zero to 200 km/h no less than 26 successive times down an airport runway, averaging a time of less than ten seconds per run, and a difference of just 0.8 seconds between the fastest and slowest acceleration runs.

HOW ABOUT THE CHARGING DURATION?

In addition to exciting cars, a customer-friendly charging infrastructure is the key to the lasting success of electric mobility. Like all electric cars, the Taycan can be fully charged overnight in the comfort and security of a home garage using a standard 240 V outlet. On the road, the Taycan benefits from the vehicle’s 800-volt technology and Porsche’s ingenious temperature control strategy for the battery. The Performance Battery Plus allows the vehicle to be charged from 5 to 80 percent state of charge in just 22.5 minutes, with a maximum charging capacity of 270 kW. And for a quick splash and dash, the battery can be recharged for a range of up to 100 kilometres in just five minutes, also using a DC rapid charger, like the Ionity chargers we used along our route between Berlin and Stuttgart.

According to Porsche, approximately 80 percent of charging will be at home overnight, which means that the Taycan driver wakes up with a fully charged car each morning, with no need to ever stop at a filling station or charging station during a weekly commute. Range anxiety, or more accurately, range planning, only applies for distances in excess of about 350 km in the Porsche Taycan. This can be managed with ease when the necessary charging infrastructure is in place, as is the case in Europe, North America, and most parts of Asia.

HOW MUCH WILL IT SET ME BACK?

Pricing for South Africa will be announced later but interested buyers can expect a price that should be slightly more than the Porsche Panamera derivatives, with the Panamera 4S currently available from R 1,829,000, and the top of the line Panamera Turbo S e-hybrid available from R 3,163,000. With the Taycan offering better performance, lower maintenance costs, and significant savings on maintenance and the cost of electricity as compared to that of petrol and diesel, this should be a compelling buy even if it comes with a slightly higher sticker price. And besides, it’s a Porsche!

While many pundits were quick to announce the new Porsche Taycan as the first true Tesla killer, the truth is that, if anything, the Taycan is a fossil fuel slayer. While Porsche acknowledged that they used the Tesla Model S as a benchmark, the true benchmark of the Taycan was always going to be every Porsche that has ever been produced. And to that end, the engineers have succeeded in producing a true Porsche with an electric drivetrain that is about four times more efficient than any internal combustion engine.

There are numerous other advantages to an electric Porsche. The Taycan has less vibration and should offer lower maintenance costs because the electric drive unit has nearly 90% less moving parts compared to an internal combustion system. The cost of electric charging is up to 70% less compared to filling up with petrol or diesel, and the Taycan offers improved safety because of the skateboard-style battery pack that lowers the car’s centre of gravity and reinforces the floor.

The Taycan has significantly less carbon emissions compared to an internal combustion engine car of similar size and performance, even if the electricity needed for the Taycan originates from a coal power plant. After driving both derivatives for more than 700 km in two days on routes that had been carefully curated to offer a mixture of city streets, back roads, motorways, and sections of the de-restricted autobahn, our verdict is simple – the Taycan is nothing less than an exceptional Porsche, and it will most certainly become the basis for the best that Porsche has to offer in future. Here’s to the next 121 years of Porsche leading the electrification of the automobile!