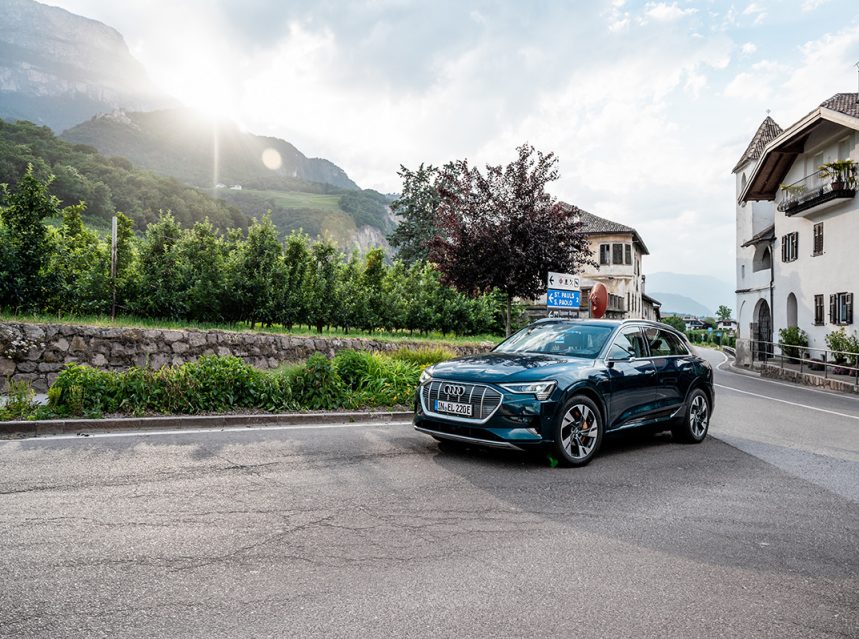 Regulators are tightening the screws on harmful emissions, and automakers are finding it challenging to justify the ongoing manufacturing of fossil fuel burning vehicles. It appears that the writing is on the wall for the internal combustion engine as more manufacturers embrace electric vehicles as the only alternative. Recently, Audi announced the introduction of six model variants of the e-tron lineup to the South African market. We were fortunate to test drive one of these variants, the Audi e-tron 55 Quattro Advanced, a fully electric SUV.

Like all car enthusiasts, EV enthusiasts seem to be divided into two camps. In the one camp, there are those who revel in the importance of it being known that their car is electric, and then there are those who prefer to fly under the radar. The former are easily charmed by the quirky designs of the Jaguar I-Pace and Tesla Model X, while the latter tend to prefer a more sedate design, as is the case with the Audi e-tron 55. While most manufacturers lean towards a more futuristic design, Audi embraces the philosophy of building on the familiarity of its existing designs, thereby easing customers into the EV lifestyle.

Without knowing that the e-tron is an EV, it would be difficult to identify it as such. The design language does not depart from conventional Audi SUVs, so the e-tron looks just like a regular Audi. A large grille dominates the front, though it is more aesthetic than functional. Familiar Audi designs flank the grille, LED lights incorporate a trending single light bar aesthetic. One feature that hints at a futuristic DNA is the slim cameras positioned where conventional side-view mirrors would typically reside. Overall the e-tron is a gorgeous SUV with an athletic stance, especially so in the Sportback version. The e-tron is also available in a choice of two trims; Advanced and S-Line.

As with the exterior, the cabin is purposefully restrained. The design language is authentically Audi, albeit with a few futuristic design elements. Most familiar are the three screens nestled in the dash. A fully digital and configurable 12.3” instrument cluster is installed behind a multi-function steering wheel. Central on the dash are two screens, with the upper 10.1” touchscreen operating Audi’s MMI infotainment system and the lower 8.6” screen controlling the vehicle’s climate control systems.

A large centre console straddles the divide between driver and passenger, and this houses a futuristic gear lever that adds to the cabin’s luxurious ambience. In addition to selecting gears, it also functions as a palm rest when interacting with the climate control touchscreen. Audi also takes advantage of the absence of a transmission, with additional storage space available in the centre console.

Clever use of quality materials makes for a superbly appointed cabin, giving the cabin a genuinely premium feel. The build quality is also sturdy, and the seating capacity is more than sufficient, with the rear seat accommodating three adults. The storage in the rear is commendable at 660 l. Surprisingly, the front trunk has scant space despite not housing an engine.

Instead of an oil burner, the e-tron 55 Quattro houses two compact electric motors, one mounted at each axle, with a combined output of 300 kW and 664 Nm when boost functionality is activated, sufficient for a zero to 100 km/h sprint in 5.7 seconds and a top speed 200 km/h. The 95 kWh battery provides a claimed range of up to 440 km.

Traditionalists will be comforted that the e-tron drives like any regular Audi SUV and is easy to navigate both in the city and on the highway. The ride quality is comfortable, compliments of an air suspension, allowing for a smooth driving experience, even when encountering unforeseen road imperfections. The power delivery, while smooth, exudes a distinct urgency that is synonymous with electric propulsion, with acceleration being near-instantaneous thanks to instant torque. The absence of an engine note is evident, replaced by a faint electric hum emanating from the motors. Audi definitely capitalised on the sound of silence by further insulating the cabin to additionally exclude any road or wind noise, adding to the cabin’s notable tranquillity and comfort.

Aside from aiding the car’s low drag coefficient, the slim side-mounted cameras serve as side-view mirrors, with a live feed display on tiny screens positioned below the A-pillars. Their functionality is commendable, especially in conjunction with blind-spot warnings. However, it takes a while to get used to viewing a video projection instead of a mirror, especially when driving at night or in inclement weather. Still, it’s certainly a conversation started for onlookers.

Due to the limited time we had with the car, we did not have sufficient opportunity to test the claimed range, but Audi assures us that dedicated charging stations (provided that they can accommodate the e-tron’s 150 kW charging system) will allow for an 80% charge in 30 minutes. Also worth a mention is the car’s regenerative braking system which harvests kinetic energy during braking to charge the car’s battery.

Our time spent with the e-tron solidified the charm of owning an EV. Easy to charge overnight in the security of your own garage, silent yet commanding, the e-tron delivers the thrill of instant electric torque. More than just an alternative to internal combustion engine cars, the Audi e-tron is a superb contender. For anyone other than a travelling salesperson, the Audi e-tron, when it becomes available in the first half of 2022, is a must to consider. We can’t wait to test the next e-tron model, and you will be the first to know all about it when we do.