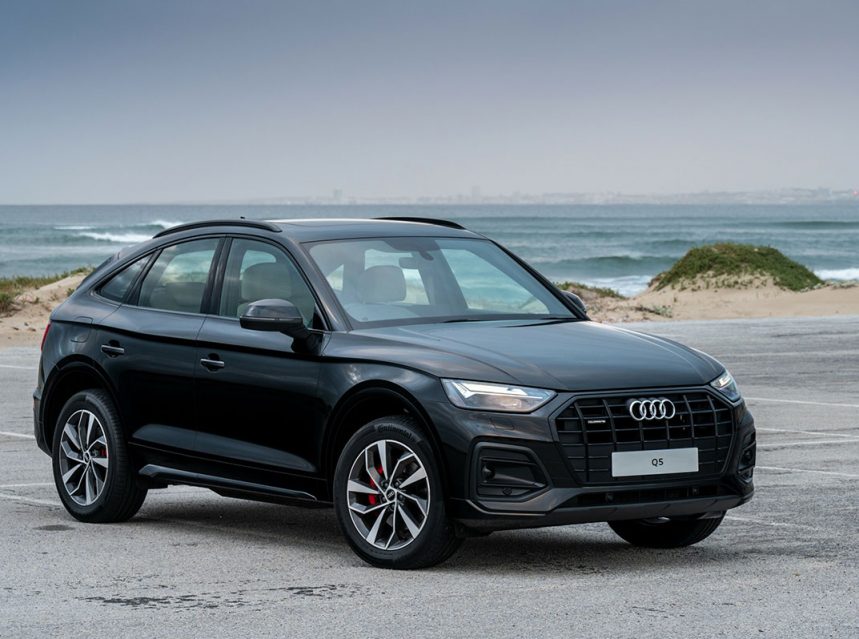 Committed to counteracting the effects of a waning economy on the luxury vehicle market, Audi recently revamped its highly popular Q5 sport-utility and added the long-awaited Sportback version to the line-up.

Despite the worldwide semiconductor scarcity, Audi South Africa is keeping its foot on the luxury SUV accelerator pedal with the refreshed Q5 and SQ5 range. The range now also includes a Sportback version for the first time, effectively doubling the overall number of models to nine.

Given that Audi lost a small slice of market share in the luxury sports utility segment in 2021, it is vital that their most popular models, of which the Q5 is one, remain as fresh as possible to maintain buyers’ interest.

Although updates to the Q5’s techno arsenal have been sparse with this round, the big news for Q5 fans is that they can now, as with the Q3, choose between the standard SUV body style or the coupé-type Sportback version.

As with previous models that have gone the Sportback route, there are, practically speaking, very few differences between the standard body style and its sleeker sibling. Mainly, it receives styling changes towards the rear of the car, where, from the B-pillar, the roofline drops at a more gradual angle to afford the Sportback a more streamlined look. There is no difference in performance or handling characteristics. Due to the sloping roof, headroom at the rear is slightly affected, as is the luggage space – but only by losing a mere 10 litres compared to its SUV style sibling.

I experienced different iterations of both the coupé and the SUV during the launch drive in the Western Cape, and can honestly report that the drive experience is virtually identical. Truthfully, I prefer the Sportback’s slightly more elegant coupé style, as I find it to be a more mature interpretation of the Q5’s increasingly futuristic look.

Whether in Sportback or standard guise, the 40 TDI quattro Q5’s 2.0-litre turbodiesel engine powers five of the nine models, offering 140 kW and 400 Nm of torque. All models also get quattro, Audi’s semi-permanent four-wheel-drive system, and a quick-thinking seven-speed dual-clutch gearbox. With this combination, the diesel Q5 will accelerate from zero to 100 km/h in 8.1 seconds – which is well in line with its competition from Munich and Stuttgart – although it sips on fuel slightly more frugally than its opponents, at 6.4 l/100 km.

With Audi’s 2.0-litre four-cylinder petrol engine under the hood, the Q5 undergoes somewhat of a sporty transformation. With 43 kW more at your disposal (183 kW) and only 30 Nm less than the diesel (370 Nm), the 45 TFSI quattro S Line Sportback is livelier and more fun, and at an estimated consumption figure of 8.0 l/100 km, it isn’t too costly to run either. Bear in mind, however, that at R1,050,000, it is slightly more expensive than its diesel counterpart (and the same price as its twin from Porsche, the entry-level Macan). If you’re willing to forego the Sportback styling for a more traditional look, the standard SUV will cost you R103,000 less.

No summary of any Audi would be complete without mentioning how incredibly refined these cars’ cabins look, feel, and function. Besides Porsche, Audi interiors are by far my favourite among the German auto manufacturers. Everything fits perfectly, the seats are exceedingly comfortable, and it all feels durable and elegant. It is, therefore, quite unfortunate that Audi only includes the basics in gadgetry and luxuries as standard in their cars. While the Q5 is by no means sparsely appointed, the Sportback 45 TFSI quattro S line tester I drove at launch, for example, was kitted out with an almighty R300,000 worth of optional extras, which makes it significantly more expensive than the much sportier Porsche Macan S, where most of the preferred “toys” are included as standard.

That said, the Q5 and Q5 Sportback are undoubtedly the most beautiful in their segment. With many models to choose from, appealing to different tastes and budgets, the Q5 looks set to assist Audi to regain some of its market share losses in the luxury sports utility segment.