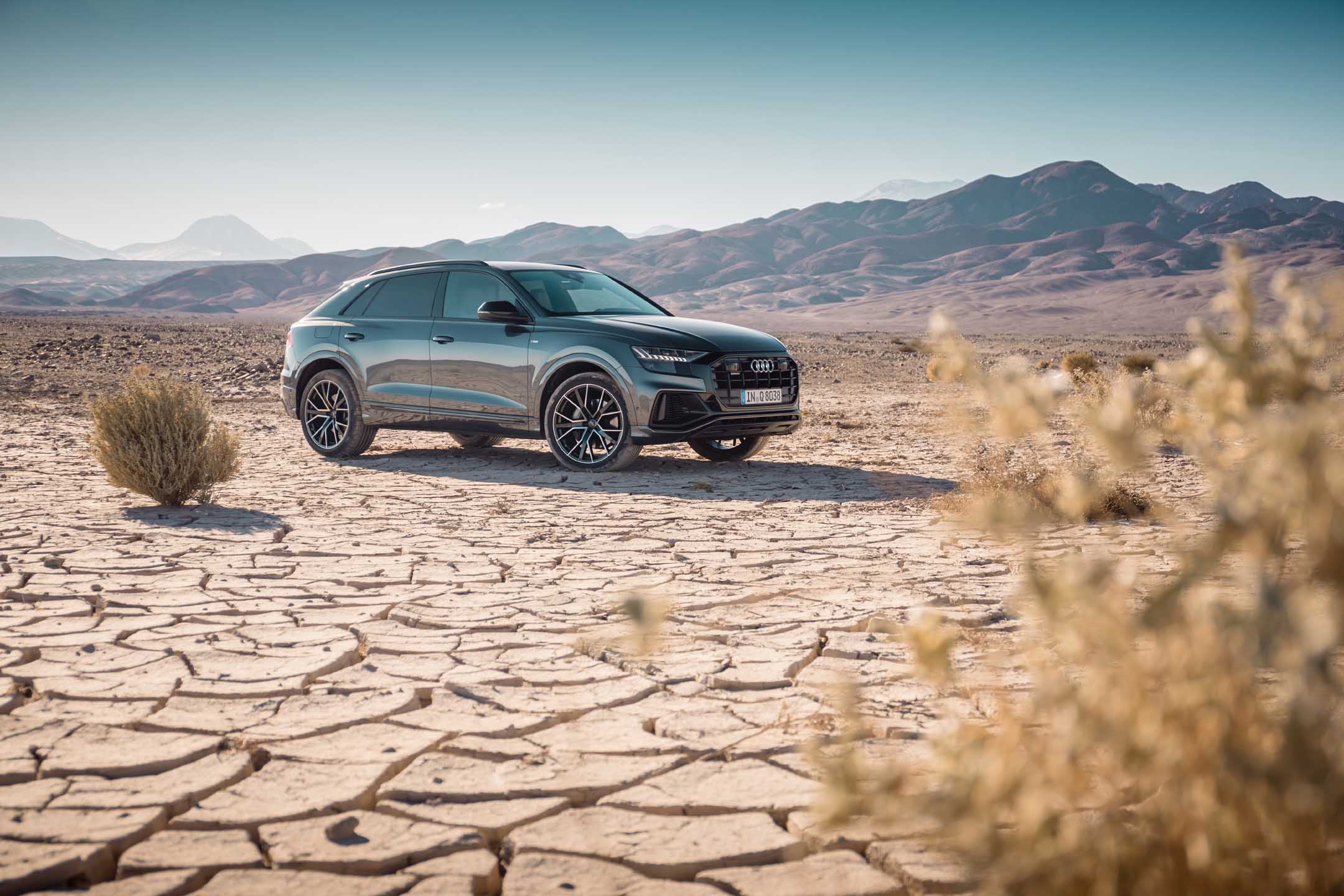 Audi’s product portfolio has in recent times seen a bit of a hiatus as far as new models are concerned. However, after much deliberation, the company has returned to form and brought new products to the market, spearheaded by the flagship SUV in the shape of the Q8, the subject of this article. Of course, there are a great number of models from the marque that will be launched this year…

For now, however, it is all about the Audi Q8 which, as the number-suffix suggests, sits above the Q7 on the company’s totem pole and is aiming for the jugular of both the BMW X6 and Mercedes-Benz GLE Coupe, the latest iterations of which have been recently unveiled and will find their way to our shores in due course. So, then, the Q8 joins the large coupe SUV fad and it must be said that of the currently available crop, it is arguably the best-looking, less compromised and most versatile.

Audi’s new cheese grater grille design language looks the part here with its distinct 3D design, flanked by those narrow Matrix LED headlights with animated illumination sequence. The side profile, meanwhile, is quite reminiscent of the original Quattro Coupe with a sloping roofline and blistered rear arches that in our test car are home to the optional 21” spider-web wheels. Moving rearwards, there are the Q8’s LED taillights with the light bar strip being its most distinctive design element.

The interior’s architecture has good perceived quality and a well-integrated appointment that includes a new haptic button technology that has a feel quite like those of sister company, Porsche. They remain intuitive to use and highly legible even during direct sunlight. The new infotainment system is also much easier to use, thanks to the touchscreen with swiping facility and larger icons for easy location an operation.

While the cabin is a relatively well put together, there are sadly some touchpoint areas that feel less premium, like the door pocket plastic mouldings that feel more Volkswagen Amarok than Audi Q8. It is small things, but one can see that the financial implications of the diesel scandal have filtered into areas of the product that have been skimped on quality. There is more than enough leg and headroom both front and rear quarter and, as mentioned, it is here that the Q8 simply creams the competition. It is decidedly more spacious and less claustrophobic as a result.

WHAT MOTIVATES THIS MODEL?

Powering our test car is the 3.0-litre turbo V6 that pushes out 250 kW and 500 Nm through an eight-speed automatic transmission. You can now also opt for the 3.0-litre TDI with 183 kW and 600 Nm. However, our petrol version proved to be a sterling performer with the good performance overall, while fuel consumption hovered around the 10-litre per 100 km but would go as high as 12.3-litres per 100 km with more spirited driving. That said it remains a flexible unit for all driving conditions.

HOW DOES IT FEEL OUT ON THE ROAD?

Ride quality, meanwhile, proved to be relatively comfortable despite the low-profile tyres. Point the model towards a series of twisty tarmac and it displays tenacious levels of grip, thanks largely to the Quattro system that shuffles power and torque between the wheels in order to find the best purchase.

There’s also none of that terminal understeer that afflicted Quattro systems of yore as the Q8 is more than keen to tuck its nose into a corner. Even with slightly raised ride height, it never feels top-heavy and keeps the body as level as possible through a corner, particularly in Sport mode.

Of course, one can feel that the engineers have held back slightly, to leave room for the recently announced SQ8 that boasts a stonking 320 kW and 900 Nm and 48-Volt architecture. That will arrive in the first quarter of 2020, while an even hotter RSQ8 has also been confirmed at a later stage.

As BMW and Mercedes-Benz ready their latest advocates for a Mzansi entry in the next few months, the Audi Q8 seems to have the segment all to its own with the latest technology and distinct looks. Granted, while the petrol tested here is good, I am of the view that the TDI with the fatter seam of torque and relaxed power delivery will be the better engine of the two, not to mention the most frugal, too.