THE SCIENTISTS OF SPEED

The thing you must understand about Audi, and especially its RS division, is that there’s very little room for personality. If any, the character is pint-sized, the frills non-existent, and there’s even less fuss. It is blunt and to the point. You see it on the inside, the sketched-with-a-purpose exterior styling and even the naming conventions – like my recent tester; the RS5 Sportback.

Like its name, I’ll keep my history lesson brief: the RS badge – that stands for Rennsport or Racing Sport – was first fitted to an Audi in 1994 when the German carmaker collaborated with sister company Porsche in an attempt to add some spruce to its (B4) 80 Avant (station wagon). It endowed it with the now-iconic RS badge and, as a result, the RS2 was born.

But that was just the beginning and, while many a history boffin might argue with me, it has been a relatively drama- and suspense-free story ever since. The performance boffins in Ingolstadt dreamed up several variations of these special renn performance-infused models that, in terms of naming convention, ranged from three to seven on the numerical scales. On the engine front, though, there was the howling in-line 5-cylinder engine. A naturally aspirated V8. Twin-turbocharged V8s and V10s and then V8s again. You name it and Audi has basically experimented with it to wring as much as possible power and torques from it.

And now, the RS has a six-pot V-inclined nuclear-adjacent power plant under the bonnet that, admittedly, after seeing it on paper, I thought was somewhat cutesy. It’s not, though, even though it is only a 2.9-litre. Like RS models of yore, it too has two turbochargers mounted to the engine that thrusts extra potency into the combustion process with the net result of these formulae producing 331 kW and 600 Nm of torque.

The result is an Audi that darts out of the box with a vigour not unlike a purebred supercar. Well, Audi does claim a zero to 100 km/h sprint that is taken care of in a matter of 3.9 seconds, and while it may be claimed under “ideal” conditions, I’d say it’s pretty close to the true ‘everyday-with-a-full-tank-of-petrol’ figure. 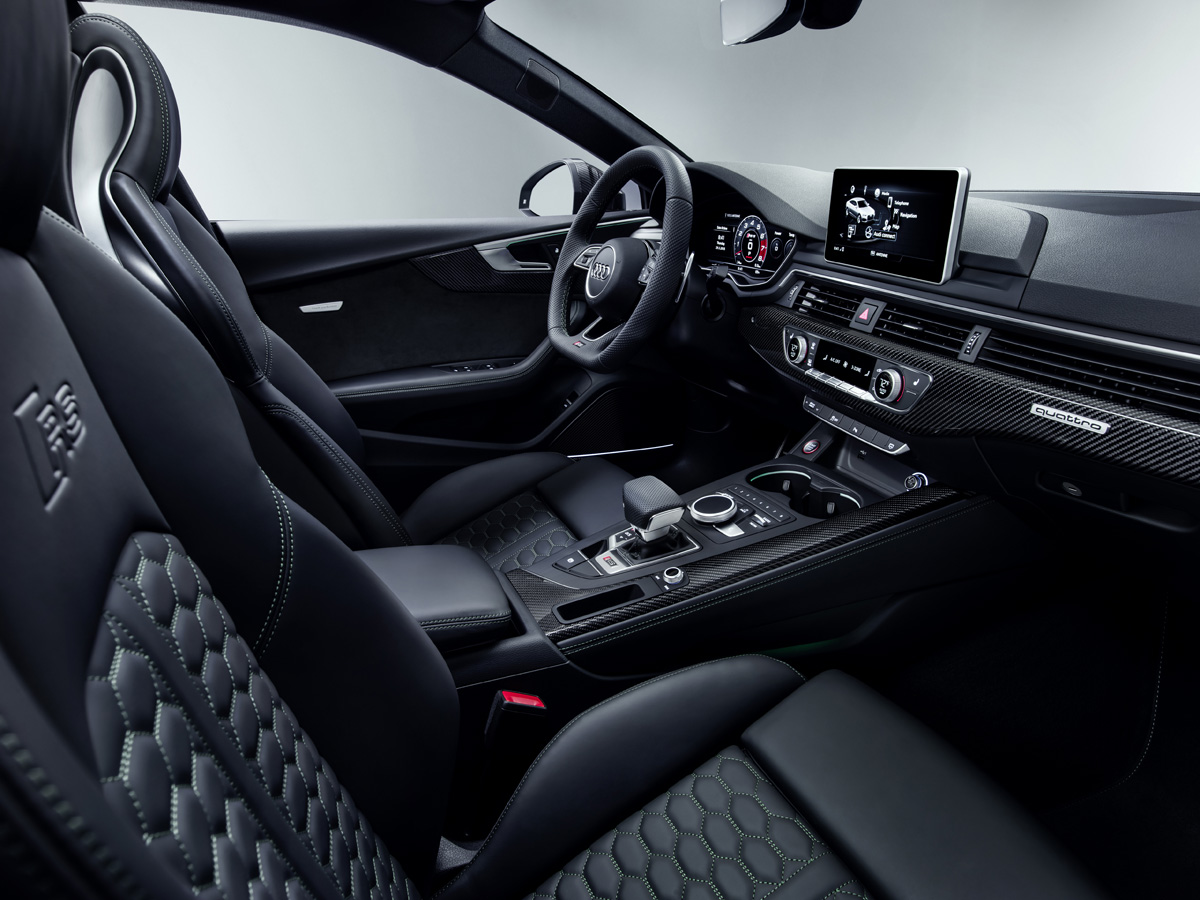 On the road, with the RS5 dialled into Dynamic mode, this translates into a white-knuckled grip on the steering wheel and a backwards thrust into the plush honeycomb-patterned Napa leather bucket seat thanks to a power delivery that is, for lack of a better description, quite unexpected.

Let me explain: When it comes to driving any classifiably fast cars, you come to expect certain things. You develop a mental checklist of sorts, there’s usually a wayward rear-end, chirpy tyres, an unruly exhaust note and, as is increasingly becoming the case with downsizing and turbocharging, an initial lag as the turbos spool high into the rev-range.

That’s not exactly the checklist suitable for this Audi, though. You put your right foot into the carpet, hold on for the duration of the tiny delay from the twin-turbo engine, and your cheeks feel like it’s aiming to occupy the space where your ears are located. No drama – except perhaps the exhaust note that, a colleague perfectly described, as a croaky Darth Vader that emanates from the chunky dual exhausts.

This forwards velocity is partly made possible by what I deem to be one of the best all-wheel-drive systems around. Called Quattro, (meaning four in Italian) this system, combined with the 8-speed automatic gearbox, cleverly distributes power to the four wheels using a centre differential. And with the 60/40% rear-biased power split, the result is grip-a-plenty during acceleration. And then, there are the corners.

This, as it turned out, is where the true talent of the RS5 Sportback shines through the otherwise armament of logic. Simply point it to the apex of just about any corner, and you can expect the rear to come alive. Not to worry, though, it has Quattro and while it allows you to have your fun before calmly reeling you back in, the RS5 never felt uncontainable in its approach. It is simply that well-engineered.

And then, of course, there are the four doors that mean anybody can join in the fun, seated in swish comfort – that is if they can excuse the slightly limiting rear headroom thanks to the sleek roofline. 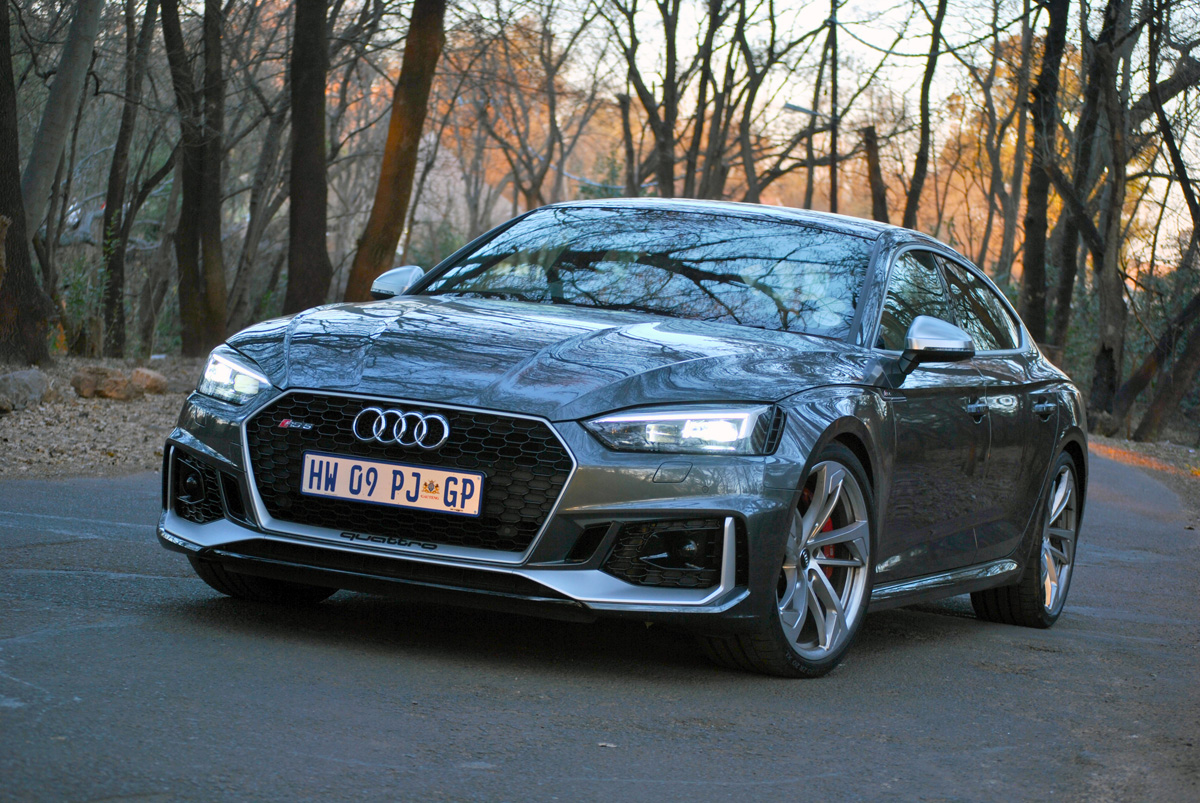 Some areas of logic on the RS5 absolutely makes me scratch my head in pensive scepticism: For one, there’s the electronic feel of disconnect between the driver and the central-located infotainment system. So much so that after managing to connect my cell phone, I just left it alone altogether. Then there are the beautifully executed seats, in contrast to a rather dated cabin that isn’t helped by the cut-price touchpoints.

Sure, it’s the now long-in-the-tooth A5 architecture. But, compared to its German rivals to the West – also known as the AMGs of Affalterbach – that offer near-identical performance, near-identical price tags and happens to be coupled with an all-consuming interior space, it feels like a limp-wristed approach from Audi.

That is about the sum of my concerns, though. This, even though it absolutely lacks the V8 charisma. And that gruff V8 soundtrack. It even falls short on imaginative naming conventions and moreover, the inherently sporty pedigree of a two-door.

I can live with all that. Instead of garnish and persona, these resources were instead re-allocated to a more scientific and micrometre-precision approach of going effectively fast, be it in a straight line or hugging a corner. And that, I can say, is something I want to live with.