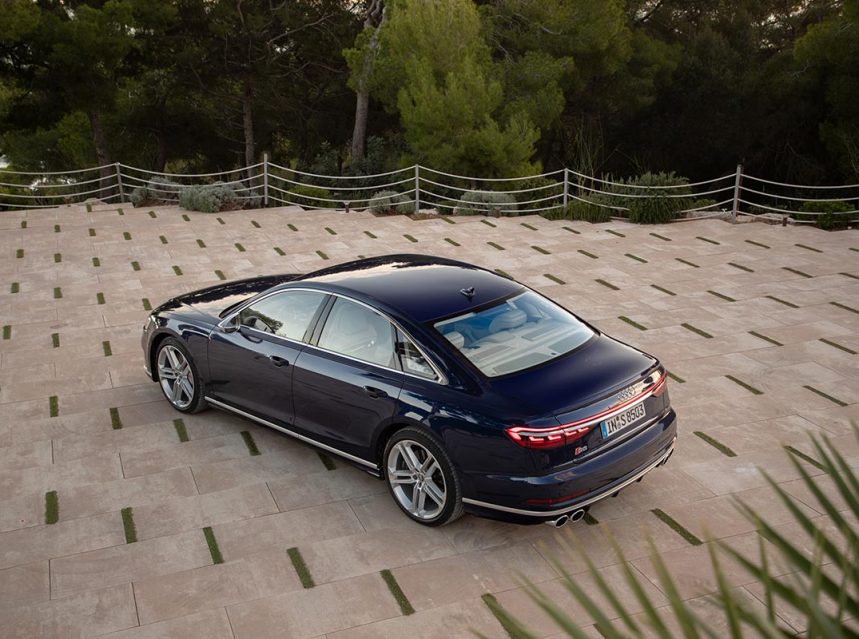 Paying tribute to Jason Stratham’s black Audi A8 featured as the hero car in the 2005 screenplay of The Transporter 2, the fascination with the high-speed Audi sedan, particularly the Audi A8, ranked high on our bucket list of vehicles to experience. Before taking delivery of our Audi A8 test car last month, we pondered whether the experience was going to be as rewarding as previously imagined, or if it was going to be a classic case of ‘don’t meet your heroes’. The proof is in the pudding as they say.

With its unassuming appearance, the S8 is a gentleman’s executive luxury sedan. Benchmarked as the quickest version of Audi’s A8 limo, there is more to this beast than meets the eye . The classy S8 will undoubtedly appeal to those who appreciate subtle charm. Both the front and rear bumpers exude the more distinctive S treatment, hailed by the S8 badges dotted around the car. The quad exhaust tips protruding from the rear, hints at the performance lurking under the hood, its brute power barely disguised.

As standard, the S8 comes with Audi’s latest LED Matrix headlights which have arguably the best luminance of any other car in this segment. The giant grille bears the bulk of the  chrome features displayed on the S8, but if you prefer a stealthier look, the black styling package is recommended. Stylistically, the S8 boasts a sharper look when compared to the regular A8. The low side skirts add to its performance stance, including a rear deck spoiler, and 20-inch alloys are standard with 21s optional.

Renowned for its superior attention to detail in the cabin area, once again Audi lives up to its reputation. The interior boasts high quality materials enhanced with stately, yet simplistic design detailing. Seamlessly integrated in the minimalistic dash, two high resolution touchscreen panels are neatly stacked together, with one serving as the infotainment unit and the latter operating the climate control system. The customisable virtual cockpit primarily operates as the instrument cluster. Included in the S treatment, the cabin is adorned with S emblems, a sports steering wheel and Audi’s sport seats.

Noted as the flagship of the Audi range, the S8 sports the most luxurious cabin designed by the marque. The contoured leather seats embossed with the S8 logo and diamond stitching, including carbon-fiber accents that can be replaced with piano black trim, are supremely comfortable and inclusive of heating and cooling functionality. The ambiance of the cabin alludes to a  lounge-like experience,  designed to transport passengers in ultimate comfort for lengthy journeys. Offering ample passenger space, the S8 can comfortably seat five adults.

Generously equipped with unobtrusive driver-assistance systems such as lane keeping assist and 360 degree cameras, it also features soft close doors and a heads-up display among other compelling features, distinguishing this as a grand, luxury performance sedan.

Powered by Volkswagen AG’s 4.0-litre bi-turbo V8, the same engine that has found its way into vehicles the likes of Porsche, Bentley and even the Lamborghini Urus, this turbo-charged engine is mated to an 8-speed automatic transmission and a 48-volt mild hybrid system, inclusive of cylinder deactivation. Combined with lightweight construction and refined aerodynamics, this brute is surprisingly economical. The engine produces a mighty 420 kW of power and 800 Nm of torque, which is delivered to all wheels through the Quattro system. The magnificent sound of the V-8 unobtrusively commands attention as the S8 sprints from 0-100 km/h in 3.8 seconds and on to a top speed of 250 km/h.

Audi has skillfully ensured that the quest for performance does not overshadow the S8’s core character. As with the A8, the impressively lag-free throttle response and quick-shifting standard ZF eight-speed standard transmission are fine-tuned to prioritize smooth power delivery. The prominent power rush experienced in the S8 is unmistakable and impressive, and feels more contained than the savage thrust of the Mercedes-AMG E63.

Driving the S8 is a relaxing affair despite having access to undeniable power at a whim. Cylinder deactivation echoes the calm relayed by the cabin’s impressive noise isolation. The S8’s air suspension, adaptive dampers and active anti-roll bars represent another significant masterpiece, ensuring a smooth confidence inspiring ride. Further enhanced with a gille-mounted camera that evaluates the road ahead to anticipate bumps, this impressive feature virtually eliminates any disruption in driving comfort. In addition, the system can raise the car by 50 mm when the doors are open for effortless ingress and egress. The same feature is also activated as a safety measure in the event of a side impact collision, raising the car so that the door sills take the brunt of the impact instead of the malleable parts of the door.

Aided by the rear-wheel steer that shortens the S8’s turning circle at slower speeds and increases stability at higher speeds, the steering is ultra precise, making it a pleasurable to pilot the S8 both in the city and on the highways. The blend of power and luxury is near perfect in this application.

The S8 is undeniably a grand, luxury performance sedan, perfectly balancing its sporty and luxury soul courtesy of the best technology and engineering that Audi has implemented in a car. Priced at R2 484 000, our Transporter hero did not disappoint.