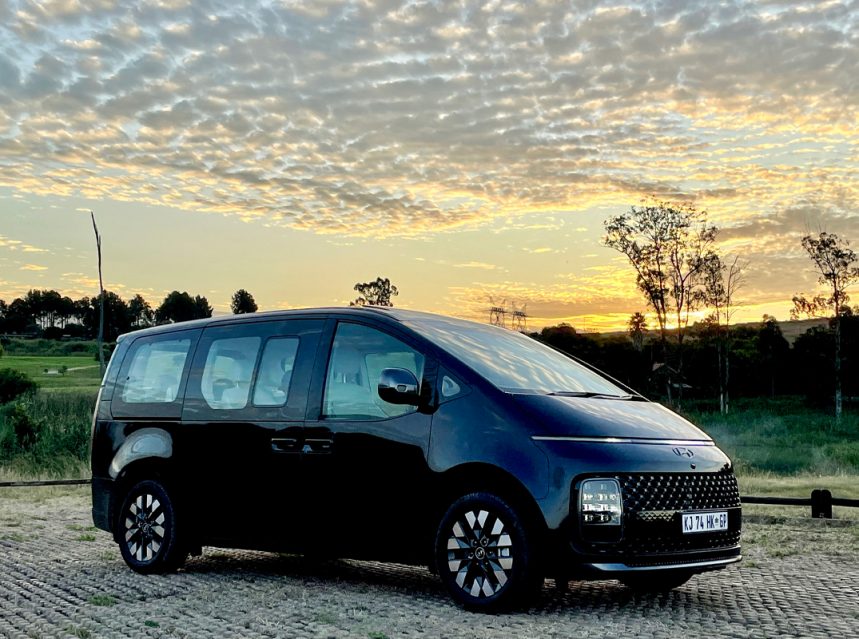 According to Hyundai, “Staria boasts a strikingly futuristic and mysterious exterior that resembles a space shuttle. A single stroke running from front to rear is reminiscent of the curve of light that illuminates the Earth’s horizon at sunrise when viewed from space”. Hmm… so the spaceship analogies and similes were deliberate after all.

When pictures of the Hyundai Staria first surfaced on the internet, its futuristic looks garnered a lot of media attention. However, now that we have had a chance to drive one, we have been able to judge it by more than just looks and are pleased to say that there is a whole lot more to the Staria than meets the eye.

Over the last few years, Hyundai’s overall design language has become bolder, which has worked well on some models and perhaps less so on others. Enter the Staria, whose mixed reception throws it somewhere in the middle. Hyundai itself says the inspiration for the design was the streamlined shape of spaceships, and this ethos is quite evident in the end product.

As the images demonstrate, the Staria looks otherworldly. Where other commercial van-based MPVs adopt a safe boxy shape, the Staria looks like Robocop’s helmet. A simple continuous curve defines the shape of the Staria, creating a sleek, wedge-shaped front. An unbroken light bar serves as the DRL (for the flagship trim), while the actual headlamps are nestled within a mesh grille that runs the van’s width. The rear and side profile feature giant windows, with exaggerated tail lamps and accentuated alloys completing the look. Say what you will about the looks of the Staria; it’s certainly a conversation starter.

The Staria is available in three trim levels: the entry-level Executive, the midrange Elite, and the range-topping Luxury. The Executive is a primary people mover with seating for 11, while the Elite offers the option of either an 11 or a nine-seater. The Luxury lives up to its name with its more exclusive and luxurious nine-seater arrangement. All seats come with three-point seatbelts and headrests, giving passengers a reassuring feeling of safety.

Our test vehicle was the Luxury derivative, and we spent a week living with the best in-car technology that Hyundai has to offer. The luxury element is also filtered into the driver zone, where you will find a fully digital instrument panel that replaces the traditional analogue gauges found in lower models. In addition to showing driver information, the digital screen also pulls up live feeds from the corresponding side cameras whenever you indicate, making it easier for you to manoeuvre this behemoth of a van. The dash accommodates the second digital screen, an infotainment unit replete with wireless Android Auto and Apple CarPlay connectivity. Front occupants are treated to a wireless charging pad, while every row in the passenger compartment comes with USB ports.

Entry into the cabin is via dual electrically operated sliding doors, which reveal a splendid cabin with all seats given the luxury leather treatment. The cockpit seats feature electric adjustment, together with heating and cooling functionality. The seats are on rails in the passenger cabin so they can be moved easily back and forth. A novel feature is the ability to swivel the mid-row seats to face the rear row in a conference type seating arrangement. The Luxury also comes with two panoramic sunroofs that create a large atrium-type feeling, with natural light cascading into the airy cabin.

This spaceship is powered by a standard 2.2-litre 4-cylinder turbodiesel engine mated to an 8-speed automatic transmission, good for 130 kW of power and 430 Nm of torque to the front wheels. I found the engine to have good poke for a vehicle of this ilk. Turbo-lag is virtually non-existent, so throttle inputs are instantaneously translated to a reassuring get up. The well-calibrated transmission heightens the engine’s performance with quiet and smooth shifts through its eight gears. The seamless execution plays well to the van’s people mover credentials, allowing you to treat your passengers to a relaxing road experience.

Driving the Staria is also made easy thanks to its light steering wheel. This system makes piloting the sizable van around town and parking lots easy. However, I found the light steering a bit unnerving on the highway as I prefer feeling some of the vehicle’s heft through the steering wheel. The cabin is well insulated, with NVH levels kept at a minimum, allowing for comfortable conversations at highway speeds if you aren’t using the crisp Bose sound system.

You will find four drive modes at your disposal – Eco, Comfort, Smart and Sport. After playing around with the Sport mode, I switched the mode to Comfort. Given the size and shape of the van, you are not particularly inspired to toss it around a twisty mountain road as you would a hot hatch. Calm and sedate is the order of the day when it comes to the drive, and you will find yourself enjoying leisurely piloting the Staria. Adding to the ease of driving are a host of semi-autonomous driving features such as lane-keeping assist and adaptive cruise control.

As standard, the Staria comes with seven airbags, EBD, ABS, stability and traction control. Add on the nifty surround-view camera that kicks in when you indicate, and you have a van that feels reassuringly safe on the road.

The MPV segment is often looked down upon due to the “soccer mom” image associated with the form factor. However, one would be remiss not to consider these well-rounded machines, whose ability to ferry large numbers of people in comfort is unmatched. The Staria is a perfect example of this point, assuring a comfortable driving experience for both driver and passengers, along with a host of technological features. Judging the design is subjective, I will admit, but let’s be honest, when driving the Staria, your vehicle will look different from anything else currently on the road. Prices start from R789,900 and peak at R1,099,900, slotting it somewhere between the VW Caravelle and the Mercedes V-Class, depending on the specification.