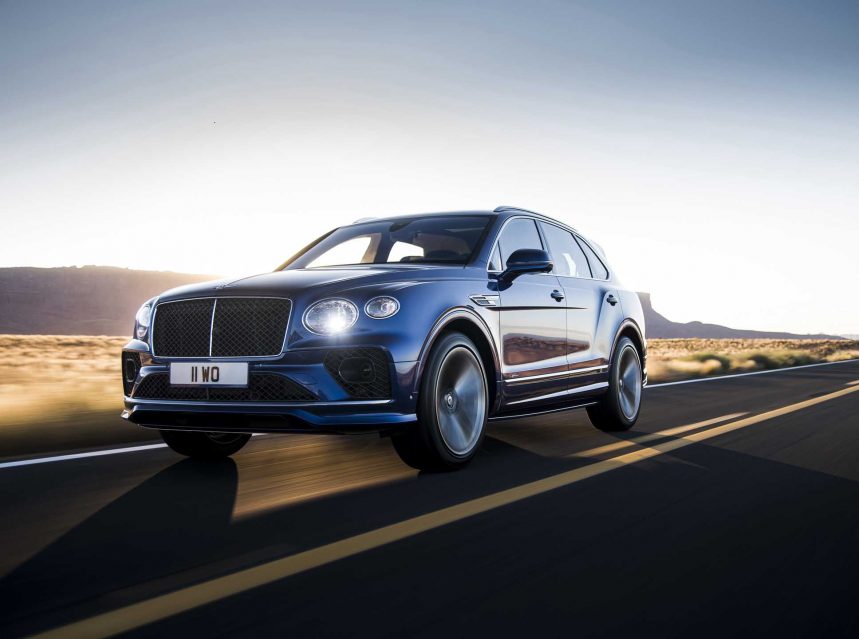 How does one improve on excellence? Well, if Bentley has anything to say about it, it needs a plateful-worth of increased boldness, a bigger engine and uncompromising luxury.

One would think that the Bentayga V8 already adheres to Bentley’s most stringent quality and luxury guidelines since, in the performance SUV segment at least, it has near-unparalleled bespoke luxury (with only the Rolls-Royce Cullinan playing in the same sphere), massive presence, and it certainly is not a slouch. But Bentley being Bentley has kept true to its roots of inter-dimensionally pushing the envelope ever farther by birthing the Speed moniker – and it is so much more than just added superfluity.

The Speed nameplate first entered production back in 2007, when the Crewe-based company gifted the already talented Continental GT super coupe with even more exclusivity in the form of uprated performance, better suspension, unique wheels and so on, ensuring that it truly lived up to its ‘Speed’ nameplate extension.

The Bentayga Speed, however, has seen an even more comprehensive list of Speed-specific additions – not only under the bonnet but also at the business end, the cabin.

Behind the large grille lives a 6.0-litre W12 twin-turbocharged engine that produces a gargantuan 467 kW and 900 Nm worth of torque that can almost transplant a slab of tarmac. In performance terms, this hand-built engine (which takes a 10% share of the car’s overall production time) can propel this larger-than-life SUV to 100 km/h in a brisk 3.9 seconds, while it will continue to a 306 km/h top speed – and it is an SUV!

Don’t think this is just a committed-to-horsepower performance catalyst either. It has the newest in clear-conscience performance technology with cylinder deactivation that ceases operation of a six-bank of cylinders should you choose to just take in the passing scenery.

Also unique to the Bentayga Speed’s performance cache is a recalibrated Sport mode that extracts the best possible throttle response from the W12 engine. It also works in conjunction with the Bentley Dynamic Ride system that, the carmaker says, provides ‘an even more dynamic and engaging drive’.

When the time comes to shave off that forwards momentum, the optional carbon-ceramic brakes are more than up for the task at hand. They are not only the most efficient brakes in the Bentley stable with 6,000 Nm worth of stopping power, but it also shaves 20 kg off the weight of standard iron brakes.

Driven covered the design changes to the new Bentayga in-depth (see August 2020) with Lerato concluding that the Bentayga has cleaned up its business attire, aesthetically putting it in line with the rest of the Crewe line-up. The Speed, however, adds a range of lapel pins as to not confuse its performance affiliation.

It sports dark-tint headlights, dark-tint grilles, Speed-specific bumpers, a tailgate spoiler, and to round off the package, 22″ wheels that are available in two finish options. There are 17 standard exterior colour choices available, with a palette-worth of 47 additional shades courtesy of the Extended and Mulliner ranges. According to Bentley, though, if a customer is looking for even more of a bespoke touch, they can match the colour on the Speed to any sample that a customer provides.

There is ample room for personalisation on the inside as well, with a selection of 15 hide colours and eight veneers. It also boasts a Speed colour split that utilises dark colour tones that is further enhanced by hide-colour accents. If it is attention to detail you’re after, there are certainly enough fine touches that will capture your attention for a while.

If you find your desire leaning even more towards the sporty side, Bentley offers the Black Specification that replaces the exterior chrome and some detailing elements with gloss black or carbon fibre elements. This extends to the 22” wheels, exhaust surrounds and spoiler that’s replaced with a curved carbon fibre edition.

There is a lot more to the Bentley Bentayga Speed than increased performance and a pretty face. It is the pinnacle of the Bentayga range that, in its own right, lives in the upper echelons of the bespoke luxury sphere. Couple that with the tantalising performance capabilities courtesy of that W12 engine, and the car becomes one of the desirable SUVs to, hopefully soon, make its South African debut – well, in my books at least.