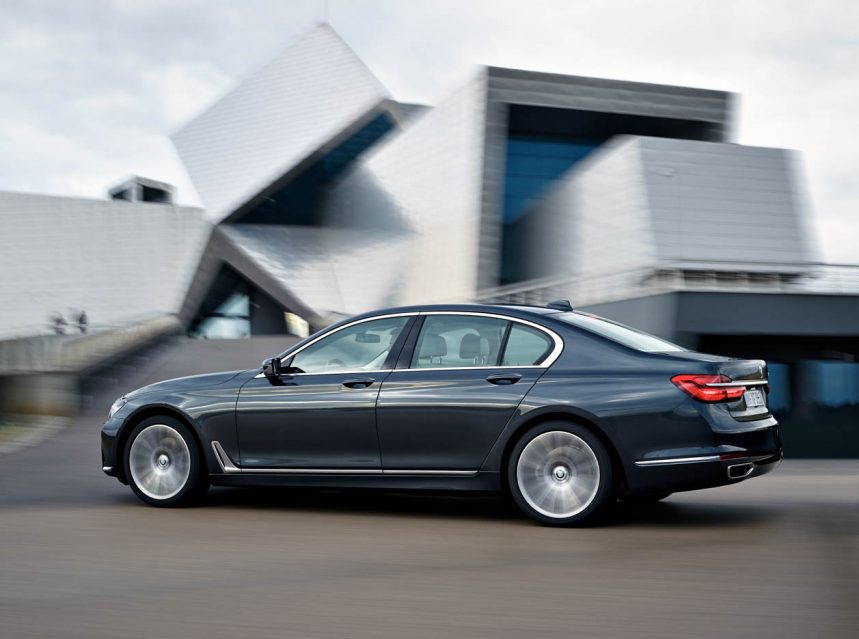 Perhaps the 2016 BMW 7 Series should be called the 14 Series, because it feels like two cars in one or even twice the car it needs to be. Normally, the BMW 7 Series competes with large executive saloons such as the Mercedes-Benz S-Class, the Audi A8 and the Lexus LS, and the big winner is usually the S-Class, but when the recipe calls for luxurious appointments, including sumptuous leather upholstery and fine wood trim, BMW never forgets the wishes of the person behind the wheel.

While every new 7 Series sold in the United States is a long-wheelbase version, we’re not so lucky down here at Africa’s bottom. We are tasked with having to make do with standard legroom in our 7 Series cars. Earnestly though, why the Americans need more legroom in a car that already has ample, is beyond comprehension. This 740i was made for space, and it delivers it in spades.

If that’s not enough, the rear seats can also be specced to recline and massage, while a metal table folds out from the centre console, a detachable tablet allows control over many of the car’s functions, and the sunroof can be ordered with an integrated LED design. With powered sunshades, ambient lighting and fragrant air, even the most pampered person (regardless of height) is content and cosseted in the 740i. The air suspension set in Comfort Plus mode insulates occupants from rough road surfaces and provides a ride fit for royalty.

Click the iDrive system (which keeps getting easier to use with every new BMW) over to Sport mode, and the suspension, steering and engine responses sharpen. Although this is a large luxury sedan, it suddenly takes on a new, nimble character. Remarkably, the car can tackle quick corners and never gives the impression that it is working hard. That’s the BMW driving talent shining through.

This is where the quiet revolution is happening. The new 7 Series is around 190 pounds lighter than the outgoing generation due to the frame. BMW is using a mix of high-strength steel, die-cast aluminium and carbon fibre reinforced plastic (CFRP). Note the car’s relatively thin A-pillars; inside are cylinders of CFRP running all the way from the hood down to the trunk. An aluminium hood, trunk lid and door panels go on top of the frame. This method of construction will be applied to other BMW models in the future.

Because this is BMW’s flagship sedan, top-notch technology is an absolute must-have. The company claims its full-colour head-up display is the largest available.

Gesture control is a cool addition. To answer a phone call, point to a certain spot. To decline the call, make a swiping action. To turn up the Bowers & Wilkins surround-sound audio system, spin a finger clockwise; counter clockwise turns it down. There’s also the ability to customize a gesture for a personal command, such as telling the navigation to calculate the route home.

Among the sonar and radar setups, the 740i has a camera that can recognise road signs, supply night vision, and read the road surface, which prompts the computer-controlled suspension to react accordingly. Another way of interacting takes place with the navigation system and transmission. Through GPS, the car knows what’s ahead, such as a hill or a set of curves, and will automatically select the right gear. Naturally, there’s LED lighting inside and out, wireless phone charging and a smart key that performs functions beyond simple locking and unlocking. There’s so much stuff that BMW will even arrange a second delivery where a technician can repeat and go into detail on all the various capabilities.

There is no doubt that BMW has extensively raised the bar in the new 7 Series, introducing numerous innovations in comfort, style, driving experience and overall excellence. Impressively, the new car boasts a substantial number of these innovations as standard throughout the range, pipping some of its German rivals (who retain extensive laundry lists of optional equipment) at the value-for-money post. The 740i is the car to beat in the full 7 Series line-up.