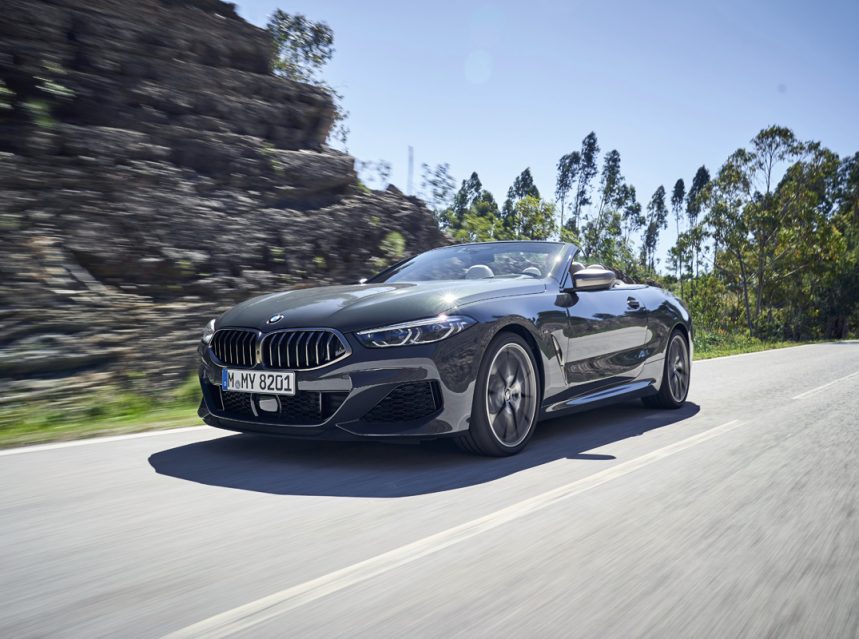 Buying a BMW because it has soul, is a bit like eating a salad for its flavour. Sure, in both allegories there is a measure of the respective substance, but it’s completely overshadowed by the logic of it all. Or so I thought before driving the BMW 8 Series Convertible in Portugal.

I’m not just blabber-mouthing here for the sake of making a bold statement. I have, in some form, shape or derivative, driven the majority of BMW’s current range portfolio. And, while each model serves a very specific purpose, the one common thread is, without fail, that business is taken care of in a very logical and structured manner – even with the M models.

There’s structure on the inside of the 8 Series too and a lot of mention has been made, especially in **Driven**, about the overly business-like approach that BMW has taken in its interior execution. Sure, there are detailed applications such as the crystallised glass gear selector that adds a measure of chic to the otherwise methodical cabin, but then again, it’s not exclusively available on the 8 Series range.

I did marvel at the smaller details of the cabin finish, though. For instance, sitting in the back I couldn’t help but trace the stitching lines of the Merino leather I was surrounded with – details that in many cases will likely never be appreciated to its fullest since the 8 is not exactly built to cart a full-house of passengers around.

A fact I realised when I found myself being driven around in the backseat of the 8 Series in order to test just how redundant the bench in the back is. Turns out, though, there’s more space than meets the eye, but only if you can negotiate to sit behind a driver of the shorter variety and the roof is open. Strangely, though, that’s a check in just the right box that I like to call character. And speaking of roofs, the fully electric soft-top on the 8 Series is available as standard fare in black, while buyers can also choose to specify it in Anthracite Silver. Operation is taken care of in a short matter of 15 seconds and can be operated up to a maximum speed of 50 km/h.

But, that’s just numbers – all of which are measurable and factual. What is however not computable is the froth-around-the-mouth sensation this car leaves you with the moment from when the roof is down and all you hear is the thrumming of the engine when kicked into Sport Plus mode.

See, BMW was even quite logical in the manner it executed the roof of the 8 Series. With the fabric roof closed, it’s a quiet and subdued affair with no intrusive noise that penetrates the cabin. Ditto with it down since wind noise is hushed and wind deflection is cleverly taken care of in a manner that your hair will likely arrive at point B roughly intact.

When it comes to building cars, manufacturers aim to achieve certain things: “Create a calming effect, much like the vertical trickle of a waterfall,” some briefs might read. However, I’m willing to bet dollars to doughnuts that when BMW conceptualised the 8 Series Convertible, it was as simple as “visceral excitement” – with a bunch of marketing speak later added to justify the angle of the headlights.

Thing is, there is a diesel derivative available in overseas markets, but with the M850i we’re getting in SA, BMW didn’t overthink this formula: add a foldaway-roof and forwards power in the form of a brisk-performing V8 engine.

The engine in question is the 4.4-litre twin-turbo V8 that produces 390 kW and 750 Nm of torque. That’s a lot, and it’s especially obvious when you dial the car into Sports Plus and it looks to exploit all the relevant figures as soon as the pedal on the right is nudged into the carpet.

It leaps forwards without hesitation, reaching the 100 km/h marker in a matter of just 3.9 seconds. It wants to keep going, though, but soon you have to lay on the anchors since this is the Portuguese countryside, and it’s twisty.

And don’t think the balance of the chassis is unsettled due to the convertible status of this **Beemer**: while I’m sure on the track, the little extra weight of the support structure will be visible against the clock, on the Algarve mountain passes I couldn’t fault the crisp handling of the 8.

And then, there’s that soundtrack that just keeps on giving. With the roof down, you get the idea that the intent behind this drop-top wasn’t to create the most flamboyant of fashion accessories. No, this car was created to be enjoyed with the roof down, foot on the accelerator and an addictive V8 snarl that assaults your senses resulting in arm-hair standing on end – and not because of the cold.

It’s quite the cutting-edge car this. It’s scientific and well-engineered. It has the BMW Operating System 7.0 and the BMW Intelligent Personal Assistant and even next-gen cruise control that reads and reacts to road signs and speed limits. It’s also quick, blisteringly so. But, while that is all expected on the business-like end of the BMW range portfolio like the 7 Series and X7, on the mighty 8 it’s somewhat overshadowed.

Whether intentional I can’t say but while BMW set out to create the visceral performer that is the M850i, it infused the car with soul. Lots of it. You just can’t quite help the froth around the mouth.