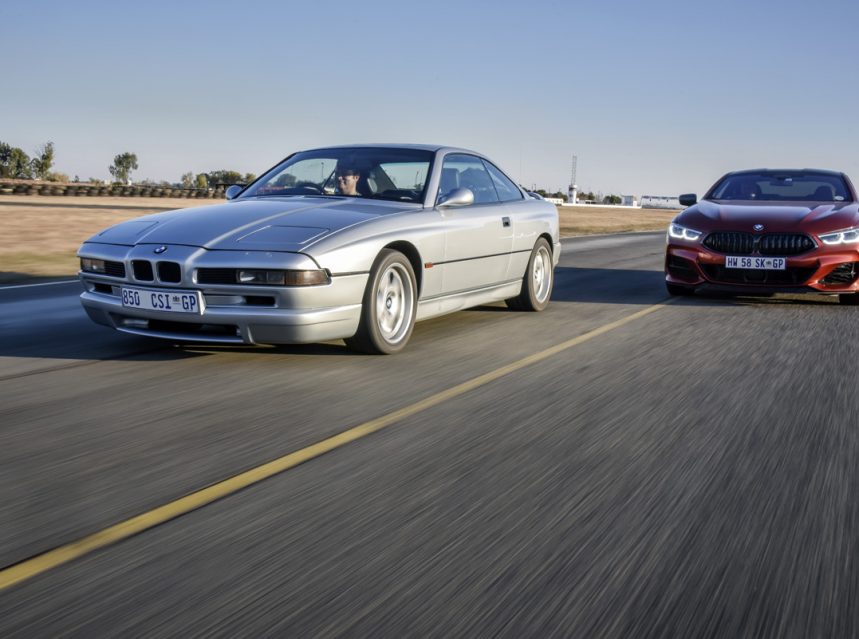 Unveiled to huge acclaim at the 1989 Frankfurt Motor Show the original BMW 8 Series never lived up to its initial promise. While most of its flaws were rectified with the CSi, its lifespan was cut short. Flawed or not, the E31 aged well and still holds its own against its G15 successor, twenty years in the making.

The ringing of bells traditionally signifies the progress of one’s watch shift while at sea. Eight bells sound at the end of the shift, and the sailor is relieved. However, besides this practical purpose, the tolling of eight bells can also mark the passing of a sailor – as referenced by Scottish author Alistair MacLean for the title of one of his famous spy thrillers.

Two decades ago, eight bells tolled for the original 8 Series on the BMW mothership as its watch, lasting only nine years, was prematurely ended. Its short tenure was termed a ‘glorious failure’ for the Bavarian brand and led to Munich ignoring the segment for nearly two decades.

It is difficult to pinpoint why the original 8er, penned by Klaus Kapitza as BMW’s flagship coupe, failed on the sales front, as on paper its specs and performance promised a sure-fire winner – a 5.0-litre V12 delivering 224 kW and 450 Nm, a 0-100 km/h time of 6.8 seconds and limited top speed of 250 km/h – but this did not translate so well to the road.

I remember not being overly impressed with its power delivery and handling when it was launched locally in 1992. The 850i was just too heavy, its engine too laidback and its suspension too soft to offer truly exciting dynamics. And it was expensive.

Only 30,621 units of the 8 Series were built and interestingly, of those 24 were hand-assembled in South Africa – as due to tax reasons it was more cost effective to construct them in Rosslyn than to import them – before the bells finally tolled in 1999.

BMW did recognise the shortcomings of the large coupe, and in 1993 released an upgraded version, the 850Ci, with airbags, infrared remote control, folding rear seat backrests and optional dynamic stability control. It also added an entry-level 213 kW V8 model, the 840Ci, and used a new version of the 12-cylinder engine to create the range-topping 850CSi.

Interestingly, 24 were hand-assembled in South Africa as due to tax reasons, it was more cost effective to construct them in Rosslyn than to import them. 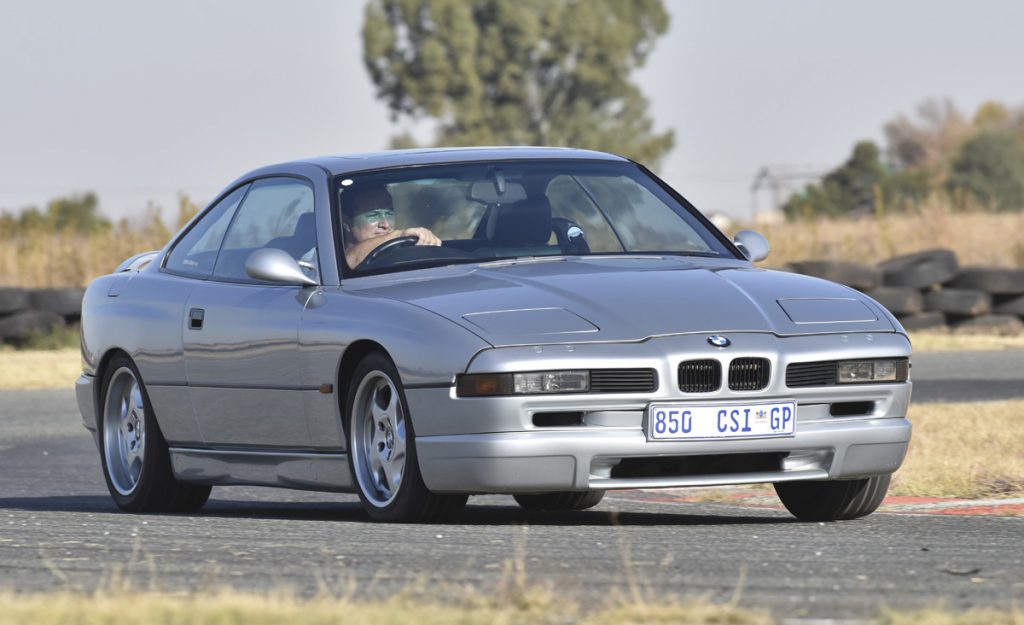 This M Division-developed derivative, equipped with hydraulically controlled active rear axle kinematics (known as AHK), with the rear wheels responding to the speed and steering angle by turning in the same direction, more rubber and more power, at last, did the original concept justice. However, it was never made available in South Africa.

Parked next to it spiritual successor, the new G15 M850i, on the long straight of the Midvaal Raceway in Meyerton, Gauteng, the 850CSi starkly elucidated the revolution in BMW design over the last three decades. While sharing a traditional coupe shape, the simple, yet elegant lines of the older model stand in glaring contrast to the convoluted, intricate body contours and shapes of the newcomer.

It is accentuated by the original Eight’s diminutive kidney grille (possibly the smallest of all BMW production models) compared to the huge, gaping (mostly faux) vents of the current range. Ironically, time has been kind to the E31. While viewed as too bland and ordinary-looking in its heyday (another factor leading to its early retirement) it aged well. Its classic lines are still contemporary, presenting a perfect foil for its descendant’s excess of form.

The original Eight was advanced for its time. It was the first BMW road car with a V12 engine mated to a six-speed manual gearbox (the CSi was only available in this form) and one of the first vehicles fitted with an electronic drive-by-wire throttle and adaptable active suspension with ‘Sport’ and ‘Komfort’ settings. It was also one of the first BMWs with a multi-link rear axle, while a limited slip diff and stability and traction control were standard.

Endowed with a 4.4-litre V8, it serves up an intoxicating blend of prodigious power delivery accompanied by a burbling, sonorous soundtrack. 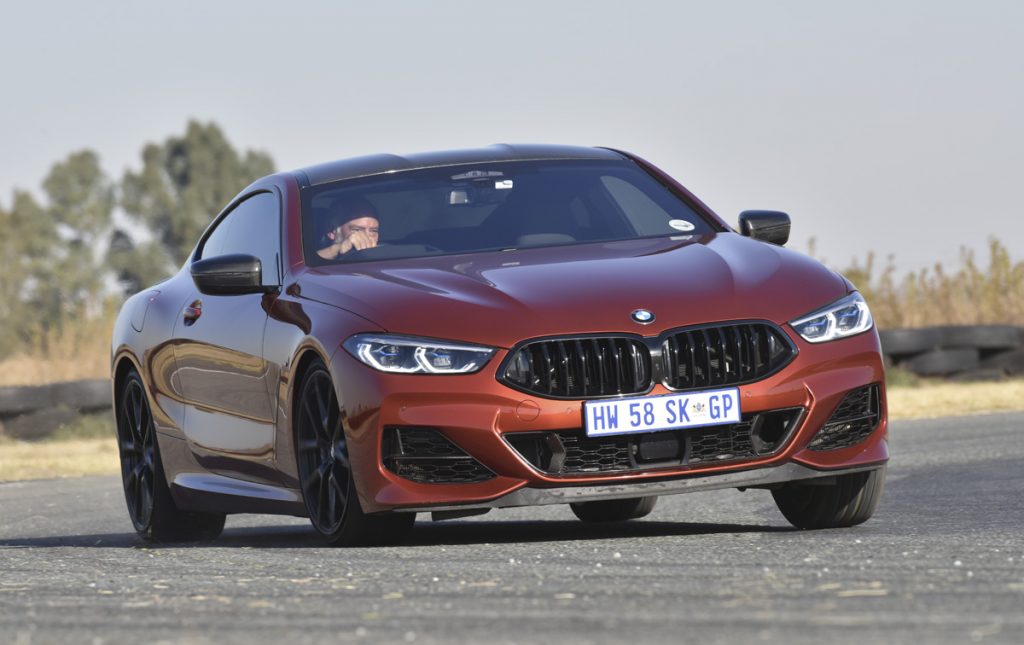 To ensure that the biggest criticism levelled at the original 8 Series – that it was not sporty enough – will never apply to its heritor, the new G15 Coupe was developed from a race car. The M8 GTE partook in world endurance races before it was transformed into the road ready M850i xDrive version (also spawning Convertible, Gran Coupe and M derivatives).

Now endowed not with a V12 like its predecessor but with a 4.4-litre V8 with TwinPower Turbo technology, it packs a healthy 390 kW from 5,500 to 6,000 r/min and max torque of 750 Nm from a low 1,800 to 4,600 r/min, serving up an intoxicating blend of prodigious power delivery accompanied by a burbling, sonorous soundtrack.

On the Midvaal track, its racing roots were immediately discernible. A new eight-speed Steptronic Sport transmission ensured smoother, yet faster and sportier gearshifts while the efficient and intelligent xDrive system maximised handling stability and traction in corners.

In full Sport setting, the system channels more power to the rear wheels, and this allowed for some lurid power slides on the dusty and slippery tarmac. Still, while competent on the track, the M850i did not feel as sharp or focused as an M5, retaining some of the refined, gentle composure essential to a grand tourer thanks to its Adaptive M-Suspension.

And the 850CSi? Well, besides the fantastic bellow from its naturally aspirated 12-cylinder mill when provoked and some lag in acceleration due to its weight, it was surprisingly stable and nimble (better than I can remember) in corners, and felt solid on all road surfaces, despite its age.

With only 1,510 examples of the 850CSi produced, and only 160 of them with right-hand drive, it is no wonder this much maligned, prematurely scuppered super-coupe is now becoming a valuable and collectable car. Personally, this BMW model in CSi guise is one of my favourites, and I would love to take it for a long cruise again.

The new 8 Series, though, addresses all the perceived problems with its misguided predecessor, in an ultra-modern form. The combination of a powerful engine in a car with optimised weight, a low centre of gravity, well-balanced load distribution, a wide track and rigid body structure makes the M850i xDrive special – and the Gran Coupe (not to even mention the M8) should be even better. With the G15 now on watch on the Munich mothership, one can say: “Eight bells, and all is well …”

*Our thanks to Martin Kotze of Meyerton for making his immaculate BMW 850CSi available and to Nino Venturi for the use of the Midvaal Raceway.

THE M8 THAT NEVER WAS…

Sadly, a much rumoured M8 version of the original 8 Series never realised but a one-off, high-performance example was completed in 1991. It featured an all-new V12 developing around 410 kW, chassis and suspension upgrades and tailored body features. Co-developed by BMW Motorsport and BMW Technik, the ‘M8′ served as a test bed for technology and innovations, and its engine formed the basis for the V12 in the Le Mans-winning McLaren F1 GTR.

Besides the Gran Coupe variant, BMW has now also unveiled an M8 version of the G15, in Coupe and Convertible guise, powered by a high-revving V8 with M TwinPower Turbo technology developing 441 kW in the standard M8 Coupe and Convertible, and 460 kW in the Competition models. The high-performance power unit is coupled with an eight-speed M Steptronic transmission with Drivelogic and channelled to the road via the M xDrive all-wheel-drive system.