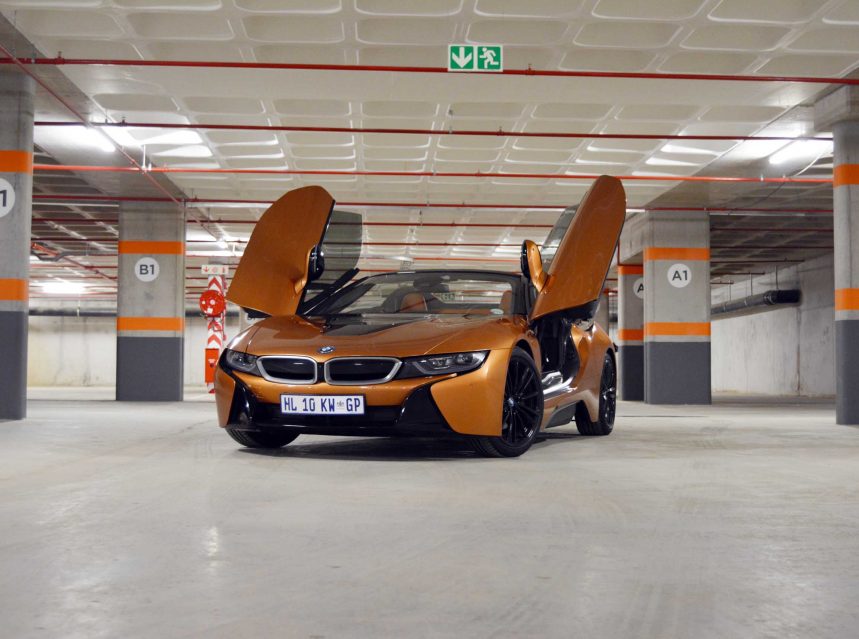 Cars have long been considered as more than a means of transport argues WILHELM LOOTS. And like the horse it replaced more than a century ago, many cars have become symbols of status.

Beyond becoming status symbols, some automobiles have acquired a certain iconic status, while others have come to be viewed as authentic expressions of art. The BMW i8, we reckon, is one such example. With its purposeful lines, sensuous contours, and futuristic elements, the BMW i8 represents a modern interpretation of a moving sculpture that speaks in silence of both movement and change. Art is renowned for its clearly defined movements and styles according to a specific era. The same is true for the art of car design. When the Jaguar E-Type was launched in 1961, Enzo Ferrari called it the most beautiful car ever made and the rest of the auto industry followed suit with sports car designs roughly based on the E-Type form for most of the 60s and 70s. In the early 1970s, when Nuccio Bertone first saw the clay model of a new Lamborghini model, he is rumoured to have used the Piedmontese expletive, “contacc”, to describe his surprise and delight at the sight of what would later become the Lamborghini Countach. To this day, expletives are still in use to express surprise and delight at the sight of a classic Countach. Since then, there have been numerous iterations of the same style elements across numerous models, but the first sports car to come along to define a whole new movement in both style and philosophy is the BMW i8. THE FUTURE IS NOW The BMW i8 design represents the sports car of the future as much as its drive system represents the future of the automobile. With its futuristic design and pioneering technology, the BMW i8 has been the world’s highest-selling hybrid sports car since its launch in 2014 and, has collected an array of awards in recognition of its visionary design and trailblazing vehicle concept. Bavarian automaker, BMW has also won the International Engine of the Year Award three consecutive times (2015 – 2017) with its plug-in hybrid drive system as implemented in the i8. This paved the way for the continually expanding number of plug-in hybrid models from both the BMW and MINI nameplates. CAPABLE PERFORMER The new BMW i8 Coupé and the dashing new BMW i8 Roadster now take the allure of sustainable driving and sports car performance to a new dimension. Powered by a dual-drive system consisting of a hybrid synchronous electric motor, and a 3-cylinder petrol engine with BMW TwinPower Turbo technology, the engine’s power is channelled to the rear wheels through a six-speed Steptronic transmission. The electric motor, however, propels the front wheels via a two-speed automatic gearbox. The net result is an all-wheel-drive system that, quite simply put, glues the car to the road. The gross energy capacity of the lithium-ion battery has been increased from 7.1 to 11.6 kWh, which increases the electric motor’s peak output by 9 kW to 105 kW. With maximum torque of 250 Nm from rest, the BMW i8 delivers razor-sharp responses to the slightest movement of the accelerator and exceptionally smooth acceleration in electric mode. Capable of reaching speeds of up to 105 km/h purely on the electric motor’s power, the BMW i8 allows for a zero-emissions drive not just in town, but on country roads as well. Then, at the push of the eDrive button, the all-electric speed is increased to 120 km/h. The new battery also benefits the electric range of the two plug-in hybrid sports cars, with the i8 Coupé capable of up to a 55-kilometre all-electric range, while the slightly heavier i8 Roadster can travel up to 53 km — well, according to the notoriously optimistic NEDC test cycle anyway. AIN’T NO SLOUCH The 1.5-litre turbocharged three-cylinder engine delivers a maximum output of 170 kW and peak torque of 320 Nm. The engine is a pleasant surprise and generates a distinctive and sonorous soundtrack that now has an even sportier note when its power reserves are called upon. The system output produced by the electric motor and engine acting in unison has been increased to 275 kW, and with a total of 570 Nm of torque on hand, the new BMW i8 Coupé accelerates from zero to 100 km/h in just 4.4 seconds, while the new BMW i8 Roadster takes a tick longer with a time of 4.6 seconds. Both models have an electronically limited top speed of 250 km/h. It’s even economic. Well, compared to conventionally-powered sportscars that is. The i8 duo both return fuel consumption and emissions figures that undercut those for conventionally powered sports cars with similar outputs by around 50%. Charging the battery is simple and easy with a ‘mode 2’ charging cable as standard, that enables a full charge from a standard domestic socket in under four-and-a-half hours. An optional BMW i Wallbox makes home charging particularly easy and convenient as it allows for a full charge in under three hours, and the optional ‘mode 3’ cable can also be used for high-power public charging to 80% in less than 30 minutes. CLEVER CAR The new BMW i8 Roadster comes with an all-season fabric soft-top with additional soundproofing and can be opened or closed in less than 15 seconds. It also allows for speeds of up to 50 km/h during roof operation. And speaking of the roof, the folding roof of the Roadster is also unique in the sense that it is the only fabric soft-top roof that stows away into a perpendicular position in the rear. Despite this, though, boot space is limited to just 88 litres. As can be expected from BMW, the new i8 comes loaded with all manner of digital enhancements that allow for seamless operation between driver and car. A computer on wheels it might be, but it still offers exceptional safety features, both passive and active. Combine this to its low centre of gravity and fortified floor, and the result is one of the safest sports cars in the world. LAST WORD Groundbreaking lightweight construction, sleek aerodynamics and avant-garde design, combined with BMWs latest technological features all combine to make the BMW i8 an instant classic as it continues its trailblazing leap towards a sustainable future.