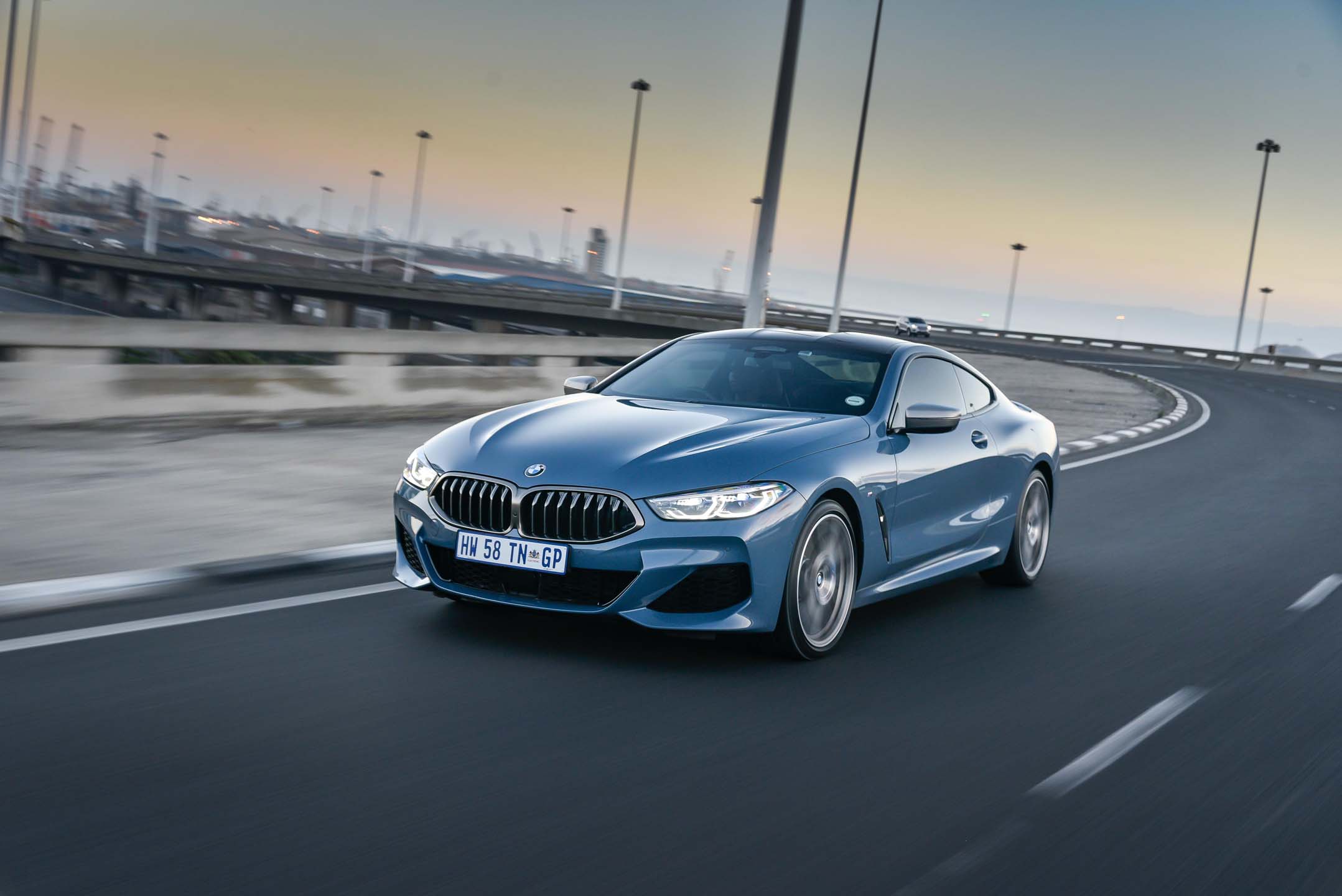 Just on three decades after the introduction of the original 8 Series E31, and two after it was discontinued, BMW again dips its toe in the now calmer GT coupé waters with the second-generation 8 Series flagship.

BMW’s introduction of the new G15-generation 8 Series Coupe is by no means an anomaly for the Munch-based luxury car brand. In line with their strategy to rejuvenate the upper end of their product portfolio by bringing grander and more upmarket models back in fashion, the new coupé is both the successor to the 6 Series Coupe, and the pioneer of a more comprehensive 8 Series family that also includes a convertible and four-door Gran Coupe derivatives. The latter of which Driven drove at the beginning of April.

Being a successor to a vehicle that was discontinued in 1999 (the old 8 Series, not the newer 6 Series) may mean little for a new generation of car buyers, but it neatly sizes up the shoes to be filled by the new car.

The original 8 Series was a pioneer in its own right, having been BMW’s first computer-designed car, the first to employ multi-link rear suspension, and the first to introduce fly-by-wire throttle control. It follows that, expecting a certain level of technological advancement in the new 8 Series is not unreasonable at all, and BMW certainly doesn’t disappoint on that front; with all-wheel-drive, four-wheel-steer, active anti-roll bars, and the latest driver assistance and infotainment tech on-board.

For now, BMW South Africa is offering only the twin-turbo V8 M850i, having opted to keep the new 8 Series’ exclusivity factor high. A diesel model is available in other markets, but it will not be available in South Africa at all. 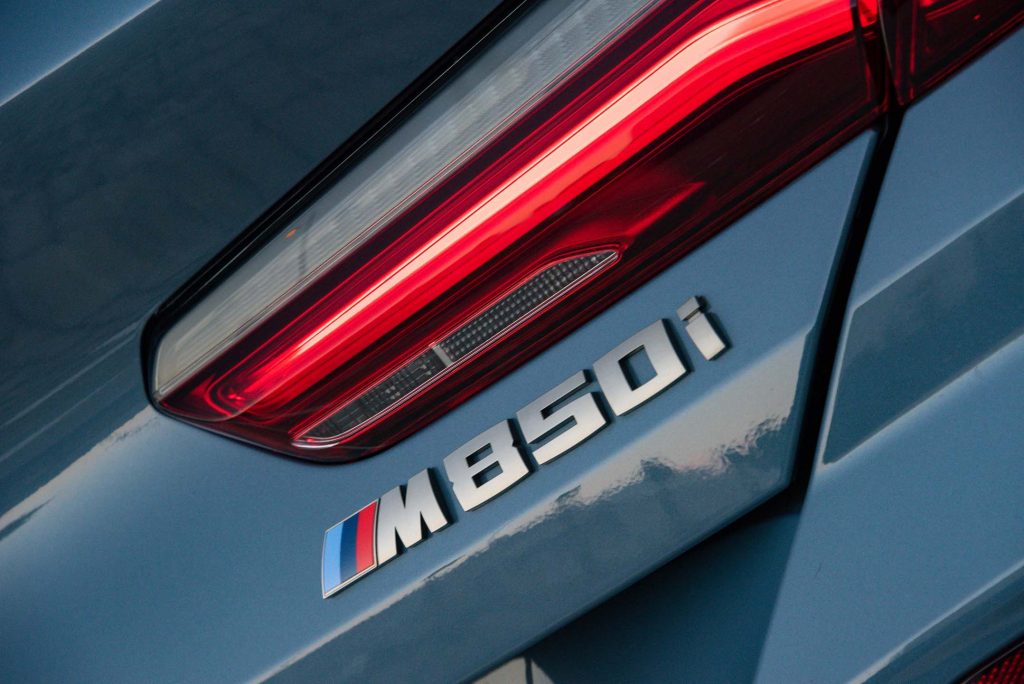 Not that much different from the original in terms of layout, the new car is still a big two-door four-seat GT coupé; the main difference being that this time around, BMW would love for buyers to think of it more as being a sports car, rather than a GT in the real sense of the word. After spending a day driving the M850i in Cape Town during its local introduction, our take is that it can, proverbially, walk and talk at the same time.

Performance and handling are both dynamic enough to qualify as a sports car – having been developed alongside BMW’s M8 GTE FIA endurance racing car. It is also made of a mix of steel, aluminium, magnesium, and carbon fibre-reinforced plastic; and boasts intelligent all-wheel-drive and four-wheel-steering as standard.

Based on its overall length (4,843 mm), and a wheelbase of 2,822 mm, the M850i has neither true sports car dimensions, nor is it remarkably huge by GT standards, being smaller than the last 6 Series. 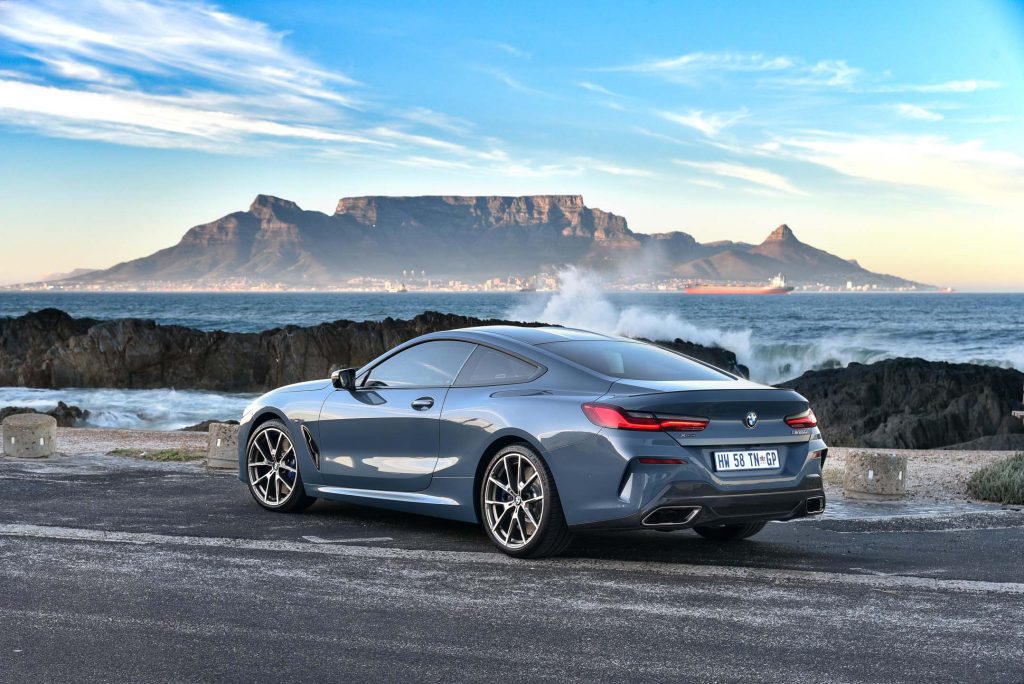 BMW cars have long had an excellent reputation for their ergonomic brilliance, but sometimes lack the ‘wow’-factor of its German rivals. The 5 Series, and even the 7 Series, are both more business-like than elegant, and while the 8 Series offers BMW the opportunity to redeem itself with a sweeping cabin display that satisfies the GT mould, the effort isn’t entirely successful, although the M850i cannot be faulted for its appropriate use of opulent materials and blingy highlights such as the crystal gearlever.

Where the cabin displays real character is in the overall layout; the high window lines, broad transmission tunnel, and driver-focused centre console that cocoons the driver. The leather-clad M steering wheel is comfortably meaty, if slightly on the plain side, and the while the longitudinal flow of the dashboard lines, high scuttle and low roofline, create a true GT pillbox effect.

The 8 Series is ready to be comfortably driven anywhere, at any speed, in any weather; and 420 litres of boot space is more than enough. Generous stowage options beneath the central armrest and in the doors should delight everyone, and the car’s electrically-adjustable leather seats offer as much support as they do comfort. 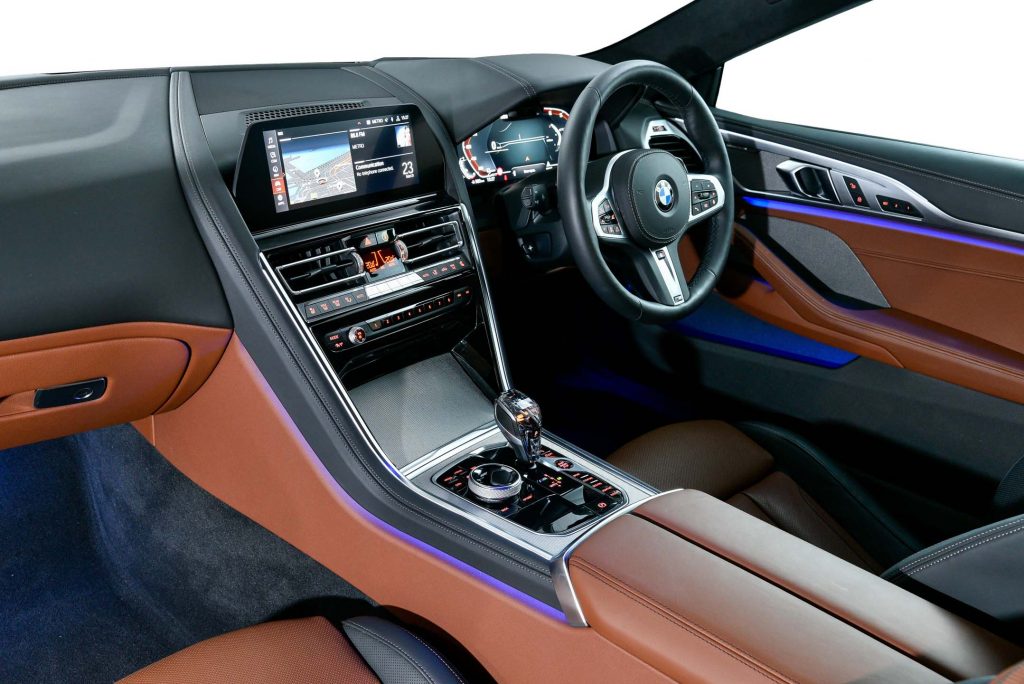 If you were expecting the outright performance of the M850i to underscore the car’s aggressive exterior design, you would be spot on the money. The car’s 3.7-second zero to 100 km/h places it close to the top of the sports car pile, if not right at its nib. The engine, a free-revving eight-cylinder, is worthy of praise, especially since it fashions the 8 Series as a brisk long-distance cruiser, as much as an exotic luxury GT in the mould of traditional great British land yachts.

The M850i is not only eye-wateringly fast against the clock, your body also feels every one of the car’s 750 Newton meters of torque (between 1,800 and 4,600 r/min) as the gearbox blitzes through the ranks from standstill, allowing it to cover as much ground in as much time as the latest M5. 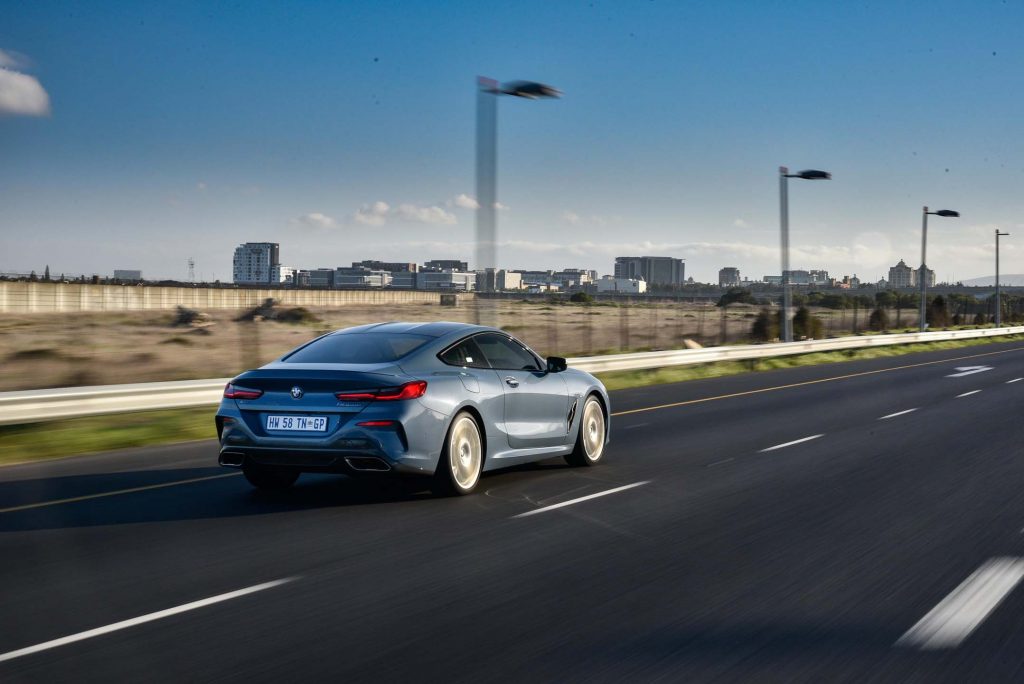 The 8 Series’ suspension is hinged to double wishbones and multiple links underneath steel coil springs and adaptive dampers. Steering is electrically assisted, and effects the turning of all four wheels via an active variable ratio ‘integral active’ steering system.

If you’ve piloted a new-generation 7 Series before, you will be aware of the car’s firmer-than-strictly-necessary ride quality. It has a well-enough ride for a large luxury saloon, but its precise nature is better suited to the personality of a large GT car such as the 8 Series. The M850i is a firm-riding car for a big coupé, and while you might want it to be somewhat more compliant over longer distances, the ride is well resolved, and the overwhelming sense of sportiness is ever present on the road, regardless of the surface.

Would we call it playful in the corners? Probably not, simply because of the absence of steering feedback from the fly-by-wire system, but what you do get is resolute stability even at higher speeds, thanks to the deft application of the speed-variable four-wheel-steering system.

Has BMW achieved its goal of turning out an E31 replacement that has both the technological foresight of its forebear, as well as striking the right balance between sportiness and luxury? You would be hard-pressed to find someone who disagrees with that sentiment, especially BMW fans. The GT wants for nothing in terms of presence and dynamism, and has just the right mix of road manners to see many GT drivers gratefully accept it. As a flagship tourer, BMW could probably not have made the M850i any better than this, making it a worthy successor to the 8 Series legacy.