BMW X2 TAKES IN THE SCENERY AROUND NAMIB’S PELICAN POINT 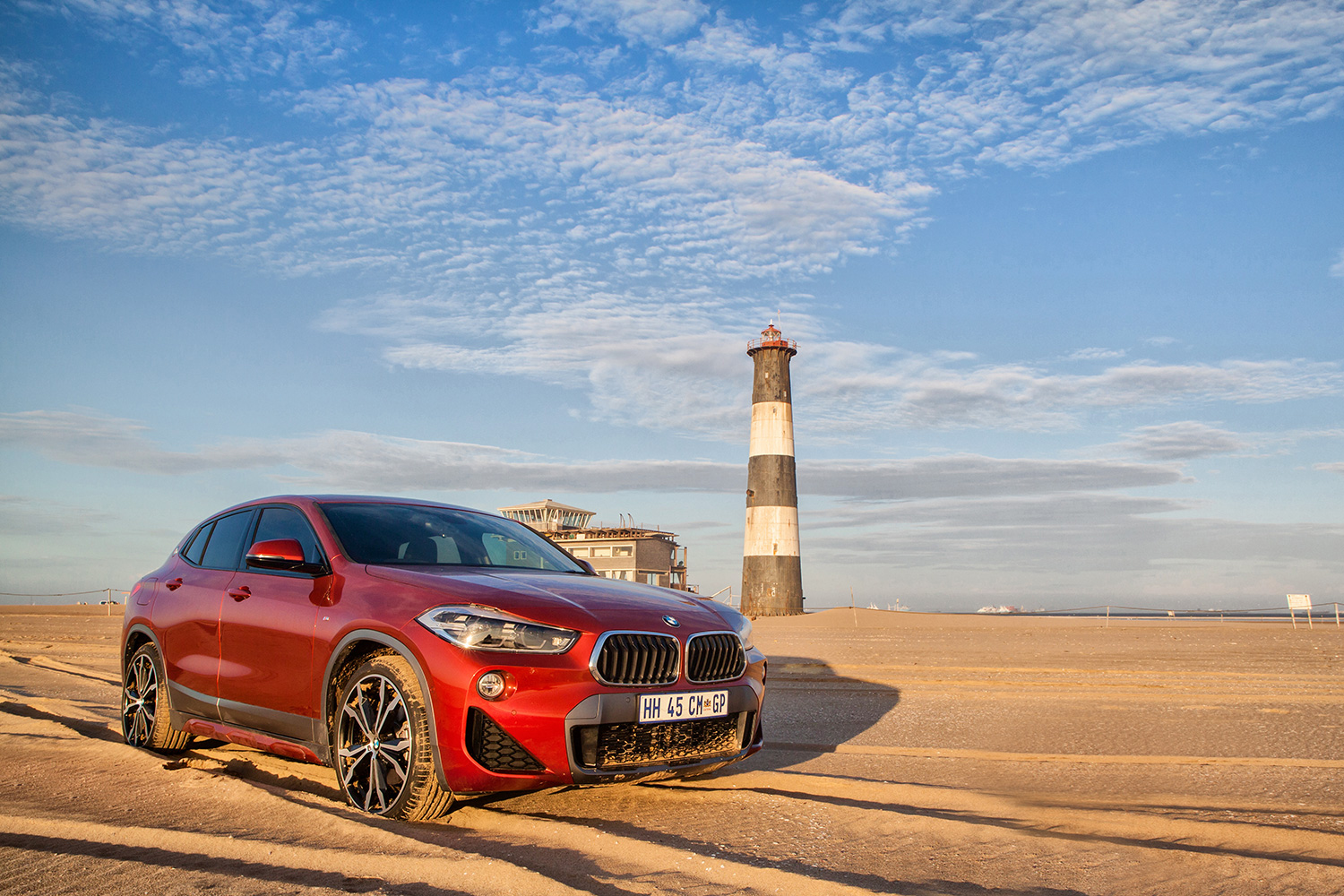 The BMW X2 is a current leading light in the new small SUV/crossover market. But, is it a real X-model? FERDI DE VOS took it on a 4,000-kilometre road trip to Namibia’s Pelican Point lighthouse in Walvis Bay, to find out.

Keep the momentum. Keep the revs up. More momentum. More revs.
That was the refrain flashing through my mind as I negotiated the nine-kilometre stretch of deep beach sand on the remote peninsula leading to the Pelican Point lighthouse, now home to an exclusive lodge for the adventurous traveller.

Following the tracks of the lead 4×4, I again wondered whether it was such a good idea to traverse the deep sand in a BMW X2. But, then again, the xDrive all-wheel-drive system aboard the BMW X2 xDrive 20d M Sport was reading my mind, instantly sending power to where the grip lives and constantly tempering the revs to keep the wheels from spinning.
Deflating the 20” low profile tyres didn’t help the situation since they still battled to find traction in the deep sand. However, it is the low ground clearance of the X2 that proved to be its most significant handicap: it couldn’t follow in the deep tracks churned out by other vehicles. This meant it constantly bottomed out, and as a result, the compact SUV had to cut its own spoor in the sand.

And, while the low front apron and massive air-intake with ‘Frozen Grey’ inserts, as well as the specially designed side air inlets are attractive, it didn’t prove to be all that practical in these conditions, assuming the role as a makeshift sand scoop with each undulation.

Still, despite these limitations, the progress of the BMW was admirable. It even earned a thumbs-up from an astonished driver of a passing Toyota Land Cruiser, just when the lighthouse came into view like an angry phantom rising from the mist.

Only minutes later, we parked the sand-covered X2 at the Pelican Point lodge. It was an unusual sight this: a bright Sunset Orange BMW standing next to the tall lighthouse tower where many a 4×4 driver has come to grief. Some of the workers also noticed this anomaly and just resorted to shaking their heads at the audacity of it all.

The sentinel of Walvis Bay dates back to June 1915, when in the clutches of WWI, South African soldiers hastily erected an upright light beacon at Pelican Point after recapturing the harbour town from German troops.
It consisted of a small automatic acetylene gas lantern that mounted on a wooden pile driven into the sand. In 1932, though, it was replaced by a 31-meter tall tower that was initially destined for Durban.

As Walvis Bay grew and shipping activity increased, the light source was replaced with more powerful lamps; the last of which was fitted in 1961. In 1971, it was equipped with a modern electric fog signal, following the installation of a radio beacon just a few years earlier.

Interestingly, the light station was built at what was then the tip of the peninsula. But, thanks to ongoing landscape shifting, the spit has extended itself by nearly two kilometres farther to the north.

In contrast to the well-worn lighthouse, the Pelican Bay Lodge, which was originally constructed around the living quarters of the former lighthouse keepers, looked stylish and modern against the otherwise eerie seaside backdrop.
The rooms are fitted with luxuriously comfortable queen-sized beds, a spacious bathroom, a balcony that overlooks the bay, and comfortable seats that beckon to be sat on while taking in the busy harbour view.

It also offers a wide array of activities — from boat cruises to bike rides, while the nature aficionados can even partake in seal viewing or jackal tracking. Mounted on “fat bikes”, we travelled past giant colonies of sleeping seals, a flamboyance of flamingos, three lonely jackals, and even a pod of dolphins a little off the shore. This truly is a game ride with a difference.

Watching the sunset from the lodge is spectacular as it paints the sky with vivid colours. We reckon it can even fill the grumpiest of travellers with a feeling of peace and contentment – something we needed after a 2,000-kilometre trek.

Our journey started two days earlier in Cape Town, and after passing through the Western and Northern Cape on the N7, we overnighted at Grünau — situated 140 kilometres north of the Namibian border.

On the long, never-ending stretches of road the compact Sports Activity Coupe, as BMW likes to call it, was in its element. The slickness of its 2.0-litre TwinPower Turbo engine and dual-clutch transmission impressed, and on the smooth road surfaces, the ride quality was comfortable.

Delivering 140 kW and with a muscular 400 Nm of torque on tap, it was easy to overtake the endless convoys of trucks. Switch the drive mode selector into Eco, however, and it becomes the ideal long-distance cruiser; sipping only around 5.2-litres of diesel per 100 km.

On the next day’s 1,000 km stretch from Grünau to Swakopmund, we again had the opportunity to appreciate the well-appointed interior, and as you’d expect from the Bavarians, it’s finished in only the highest quality materials.
Onwards from Rehoboth, the countryside was lush and green after some good rain, and close to Omaruru, we even drove through a thunderstorm. Here we encountered roadworks, and on some of the badly rippled surfaces, the X2’s ride was disappointingly hard — even in Comfort mode.

Nearing Usakos and travelling next to the ‘Spitzkoppe’, the clouds finally cleared, and we soon found ourselves in cool and misty Swakopmund. The BMW X2, with its bold and extrovert styling, looked right at home next to the new, recently opened four-star graded Strand Hotel – set on the Mole, a historic site surrounded by the ocean on three sides.

And, as is true Namibian fashion, the service at the Strand was exemplary. The rooms were inviting, the view spectacular while the beers were cold and welcoming — what more can anyone want… It is the perfect stop for travellers looking to explore Swakopmund and its surrounds, and for us, a peaceful haven before starting our long southerly return journey.

So, what did we learn from our 4,000 km X2 odyssey? Well, while the Bimmer is good for a long-distance cruise and even performed decently in the sand, it is not really suited to rough-roading thanks to its limited ground clearance.

This specific model with its flashy wheels and striking body kit is more of an urban cruiser wearing a lifestyle jacket. And, in this writer’s opinion, it misses the mark as far as the pure DNA of the X-model line-up is concerned. So, if the rough stuff forms part of your everyday lifestyle, stick to something that has true crossover pulsing through its veins.