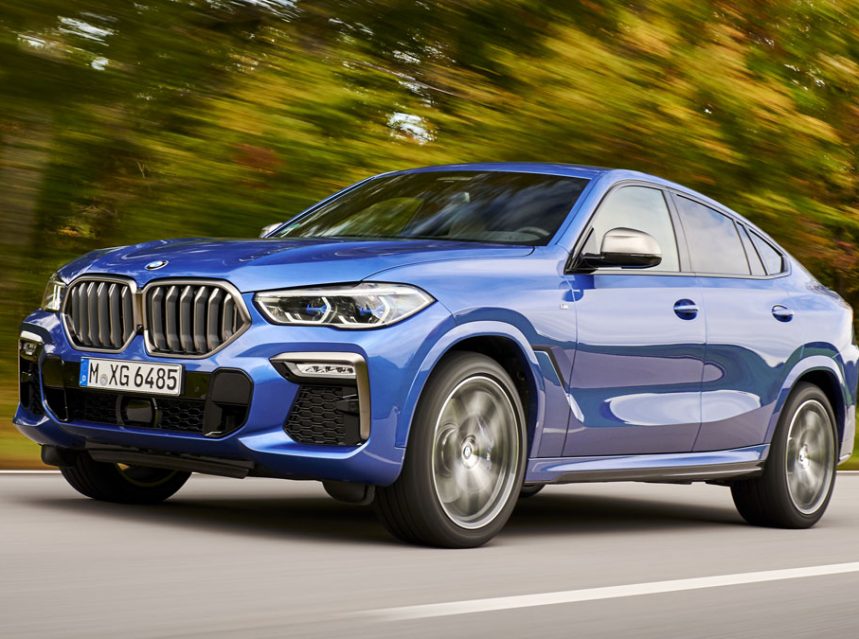 BMW’s niche X6 is now in its third generation and, for something that was sniggered at by motoring scribes since the first model arrived on the scene in 2008, the Munich-based manufacturer proved that there was method to the madness. Today, Audi has the Q8, Mercedes-Benz the GLE Coupe and Porsche the Cayenne Coupe – all vying for a similar audience. Lerato Matebese looks at some of the highlights of the latest Bavarian X bruiser.

Throwing caution to the wind and creating your own rules can either yield success or disappointment, but in the instance of BMW’s X6 model, the former strongly rings true to this day. In essence, the X6 is the sportier-looking descendant of the X5 with its sloping roofline, steeply raked rear windscreen and hatch-type boot lid. Quite frankly, the spawning of the X6 was a stroke of genius and has influenced the theme to trickle down into lower segments where the X4, Merc GLC Coupe and the forthcoming Audi Q5 Sportback will be playing.

Since the original, the styling of the X6 has always been its main forte and it continues a similar trajectory with the latest model, boasting a stocky, hunkered-down stance and low roofline. Those large kidney grilles, which can be specified with soft LED lights – finished in anthracite on M Performance models – are flanked by slimmer headlights and continue to dominate the front visage.

Meanwhile, the large wheel arches are home to an array of wheel sizes measuring from 19” right up to 22” in diameter. The rear is arguably the model’s most pronounced and elegant yet, thanks to those thin sliver rear light clusters, while the baroque rear haunches hint at its sportier demeanour. Overall, it is a more contemporary take on the original, yet the lineage remains prudent right through all three generations.

Dimensionally, the new X6 has grown by 26 mm in exterior length over the outgoing model (to 4,935 mm) and by 15 mm in width (to 2,004 mm). It now stands 6 mm lower (at 1,696 mm) and combines dynamically stretched proportions with exceptional visual muscularity. The car’s wheelbase, on the other hand, has stretched by 42 mm to 2,975 mm.

The passenger front quarters have been lifted wholesale from its X5 sibling boasting the latest digital interface both on the instrument cluster and the iDrive infotainment system with touchscreen and gesture control facility. It is an elegant, if slightly sporty take on the X theme, while the rear compartments should be accommodative enough for adults without feeling claustrophobic.

The new X6 comes with an optional panoramic glass roof that is said to be 80% larger than the outgoing model, which should flood more light into the cabin and the rear quarters in particular. Boot space is a generous 580 litres, which should make the model a perfect holiday travel companion. You can expect a suite of safety items that we have seen in the X5 including Lane Keep Assist, 360-degree view camera and even rear-wheel-steer to make it a more agile vehicle to manoeuvre in town and tight parking spots.

Three engine derivatives will be made available with the xDrive40i boasting a familiar 3.0-litre straight-six turbo powerplant with 250 kW and 450 Nm. There is also the M50i with a 4.4-litre, twin-turbo V8 with 390 kW and 750 Nm, while the only performance diesel offered is the familiar M50d that utilises a 3.0-litre straight-six with a quad-turbo setup to muster 294 kW and 760 Nm.

All models come standard with an 8-speed ZF automatic transmission and xDrive four-wheel-drive traction. Naturally, there will be the headlining, foam-at-the-mouth, X6M Competition joining the lineup at a later stage. According to BMW SA, the decision to bring two M Performance models from launch was that the SA market is biased towards the top models and, the fact that the X6 is a niche model, further drives the point home.

Dynamically, we can expect the X6 to be a top-notch handler with rollover mitigation systems to prevent the vehicle from leaning in corners during spirited driving situations. While the M50d was our favourite X5 of the current range, we reckon that the raunchy sounding V8 in the M50i will be our pick until the arrival of the full-fat M version.

A double-wishbone front axle and five-link rear axle give the new BMW X6 the ideal suspension tools to deliver dynamism and ride comfort on the road, plus unshakable traction off the beaten track. Dynamic Damper Control is included as standard, the Adaptive M suspension Professional with active roll stabilisation and Integral Active Steering endows the car with exceptionally agile and dynamic driving qualities, and the new BMW X6 is also available with two-axle airsuspension including automatic self-levelling.

The car’s height can be altered at the touch of a button in the cockpit through a maximum of 80 millimetres. An off-road package is available for model variants – not including the M50i and M50d – allowing the driver to choose from four modes that optimise progress over snow, sand, gravel or rocks respectively. At the press of a button, they can also activate the ideal settings for the vehicle’s ride height, the drive system, accelerator response, transmission control and the DSC system’s corrective inputs.

Say what you will about the X6 being a pointless car, the fact of the matter is that it has created a niche coupe SUV segment that most premium manufacturers are now playing in. Mercedes-Benz is readying to release its second generation of the GLE Coupe, and it would be interesting to see how it stacks up against its new rivals. For the X6, however, its three generations later and the progenitor of the segment still looks poised to continue leading the genre.