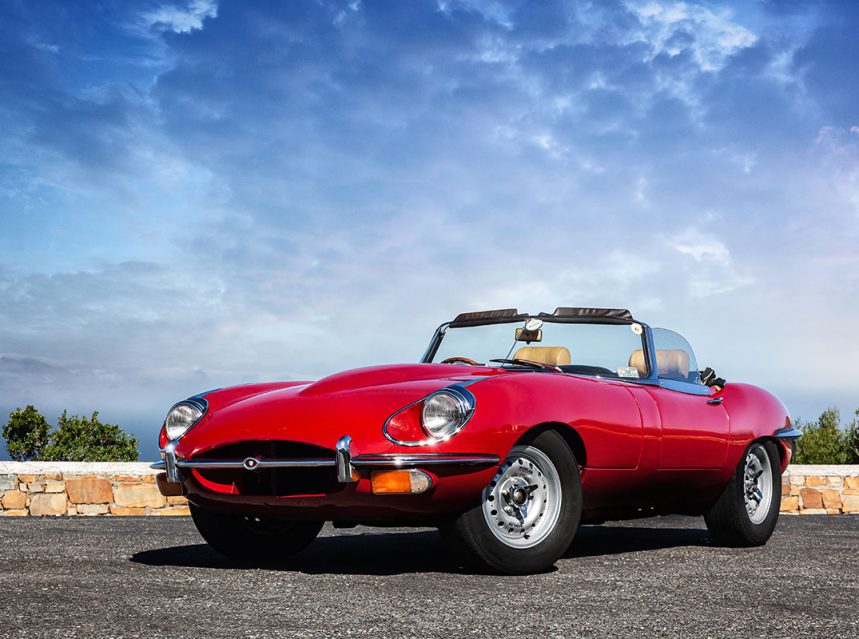 It was just before 22h00 on the second day of the 1961 Geneva Motor Show when Jaguar test driver Norman Dewis parked the open-top E-Type, registration number 77RW, at the Parc des Eaux Vives after an 11-hour overnight drive (at an average speed of 143 km/h) from Coventry in the UK to Switzerland.

The hand-built test car immediately joined its sister car, a fixed-head coupé with registration number 9600HP – by then the undisputed star of the motor show – for demonstration runs up a nearby hill-climb course to an ever-growing queue of eager journalists.

The launch of the E-type the previous day caused such a stir that Jaguar founder Sir William Lyons called back to Coventry and famously said: “Get Dewis, wherever he is, to drop everything, and bring the open-top E-type over”. Dewis left the same day and dashed to Dover to catch the last ferry to Ostend.

He missed the ferry by 10 minutes. Luckily, an official saw the green E-Type, immediately recognising it as the “car launched yesterday”, and got Dewis and the Jag on board. In the end (as reported by jaguar.gi and stratstone.com), he completed the 960 km journey in time for a sidelong compliment from Lyons: “Thought you’d do it, Dewis”.

The E-type first seen by the public in Geneva – literally the Jaguar that turned a million heads – was the prototype 9600HP, and it was nearly late for its own unveiling. Before the launch, 9600HP was lent discreetly to a few motoring journalists in the UK, which left precious little time to get the car to Switzerland.

So, in dramatic fashion, the gunmetal grey E-type was driven flat-out from the UK by Jaguar PR executive Bob Berry – arriving in Geneva just 20 minutes before the big reveal, where Malcolm Sayers’ stylish design and the advanced engineering concept of the E-Type caused a sensation; with Enzo Ferrari calling it “the most beautiful car ever made”.

Straight after the Geneva Show, 9600HP – the tenth production coupé built and the

most famous E-Type in the world – was converted to right-hand drive. It became a UK press car and the subject of numerous glowing reports (according to some sources, the car was shod with Dunlop racing rubber for the tests) – cementing the E-Type’s reputation and ensuring its success.

Interestingly, as with the Jaguar XK-E, the iconic car was originally earmarked only for the North American market, but its triumphant reception in Geneva changed this. Available as a sleek coupé or glamorous convertible, the E-type mixed high technology, sweeping beauty, and refined performance. Its balance of sports car performance with everyday usability rewrote the rulebook.

Now, to celebrate the 60th anniversary of the iconic sports car, Jaguar Classic is creating a strictly limited edition of six matched pairs of restored 3.8-litre 1960s Series 1 E-types paying tribute to the famous 9600 HP and 77 RW. Known as the E-type 60 Collection, the cars are being built for sale by a handpicked team at Jaguar Classic (more information on these cars is available at www.jaguar.com/classic).

Jaguar is further marking the diamond anniversary of the legendary sports car with the introduction of a new limited-edition 423kW V8 Supercharged F-Type Heritage 60 Edition. Only 60 examples in both coupé and convertible body styles with solid Sherwood Green paintwork (similar to the colour of 77 RW) will be available for sale worldwide – but unfortunately not in South Africa.

As a youngster, Nigel Stokes was immediately smitten by the E-Type when it was released in 1961. Back then, he promised himself he would own one in 21 years – and true to his pledge, he bought a beautiful red 1969 Series 2 4.2-litre convertible about two decades ago.

Since then, his Jag collection has grown to include a red 2016 F-Type S convertible powered by a supercharged AJ V6 engine delivering 279 kW and 460 Nm of torque – in his view, still the best model derivative in the F-Type range (with the possible exception of the limited-edition F-Type 400 Sport).

When he heard that we wanted to celebrate the 60 years of the E-Type with a 4.2-litre E-Type (generally regarded as the best of the type), and a comparable F-Type (preferably with a six-cylinder engine as the E-Type was never available with an eight-cylinder mill, only with a straight-six or V12), he kindly offered us his two red beauties for our photoshoot.

With the V6 version dropped from the current F-Type range, Nigel’s pre-facelift S convertible was ideal for representing the modern era in the iconic Jaguar sports car’s history, perfectly complementing his delectable Series 2 six-cylinder drop-top. While the Series 1 E-Type, built until 1968, may be considered the most sought-after derivative, the Series 2 is the easier-to-live with model, according to Nigel.

Produced from 1968 to 1971, the most distinctive differences between the Series 2 and the Series 1 are the absence of headlight covers (changed due to American legislation), a slightly enlarged grille, larger indicators repositioned below the bumpers and a wrap-around rear bumper.

Other changes include an ignition switch on the steering column (moved from the dash and replacing the starter-button), metal toggle switches replaced by plastic rockers, a collapsible steering column, and new seats allowing for headrests. Under the hood, the smooth polished cam covers of the XK6 engine changed to a ribbed appearance, and two cooling fans were installed.

The E-Type’s combination of beauty, high performance, and competitive pricing established the model as an icon of the motoring world. With its inline-six 4.2-litre engine churning out 198 kW and 348 Nm, the E-Type delivered 0-100 km/h times close to 6.5 seconds and reached speeds of up to 241 km/h.

While the supercharged V6 of the F-Type S possesses 107 more horses than its predecessor, its burbling engine note cannot compete with the distinctive growl emanating from the E-Type’s twin-pipe exhausts. And while the newer Jaguar has a charm of its own, it is still no match for the E-Type Roadster in the fashion stakes.

Besides its beauty, its unitary construction – with a front subframe carrying the engine, front suspension and front bodywork attached directly to the body – independent front and rear suspension, disc brakes standard all round and rack-and-pinion steering set it apart from its competitors 60 years ago.

It is a milestone car – defining the sports car genre on both sides of the Atlantic (and the East) – and its advanced technology led to radical changes within the industry. For these reasons, it will still be a celebrated icon 60 years from now.

Our thanks to Nigel Stokes and Bob Brown of the Jaguar Owners Club South Africa for their generous assistance with this article.