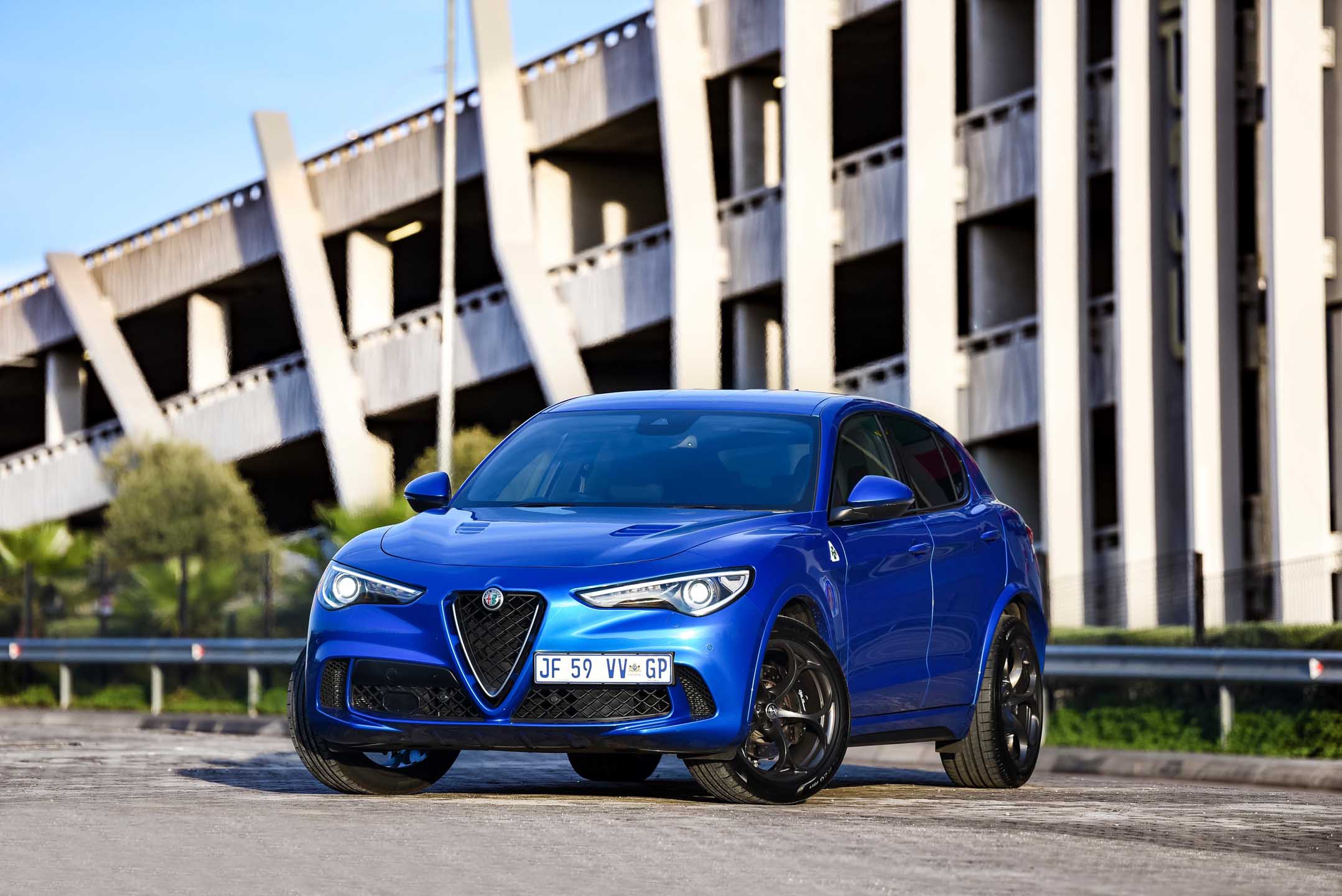 Alfa Romeo deserves to do well on the sales charts! Let me rephrase that: Alfa Romeo should be a runaway success. Alas, it continues to be plagued by perceptive, pre-conceived ideas of unreliability and poor workmanship. And while some of these are true, there are more merited aspects to the brand that will eternally be inscribed in the automotive annals.

In my humble view, all that this brand need is to be under the custodianship of a conglomerate like the Volkswagen Group. This move would allay any reliability and quality issues that are currently present – thanks to pedantic German engineering standards – and thus let the Italian brand continue with its feverishly good-looking designs.

That said, the Italian brand’s Quadrifoglio (formerly Quadrifoglio Verde) arm represents performance, panache and ultimate prestige. It is currently spearheaded by the Giulia sedan and Stelvio SUV models and, while I have had the privilege to sample both, it was surprisingly the latter that truly left an indelible mark of appreciation in me. For someone partial to sports sedans over SUVs it might come as a surprise, but sadly the Guilia Q I tested three years ago was plagued with electronic gremlins that left me rather cold at the end of the test tenure.

WHAT OF THE STELVIO Q? 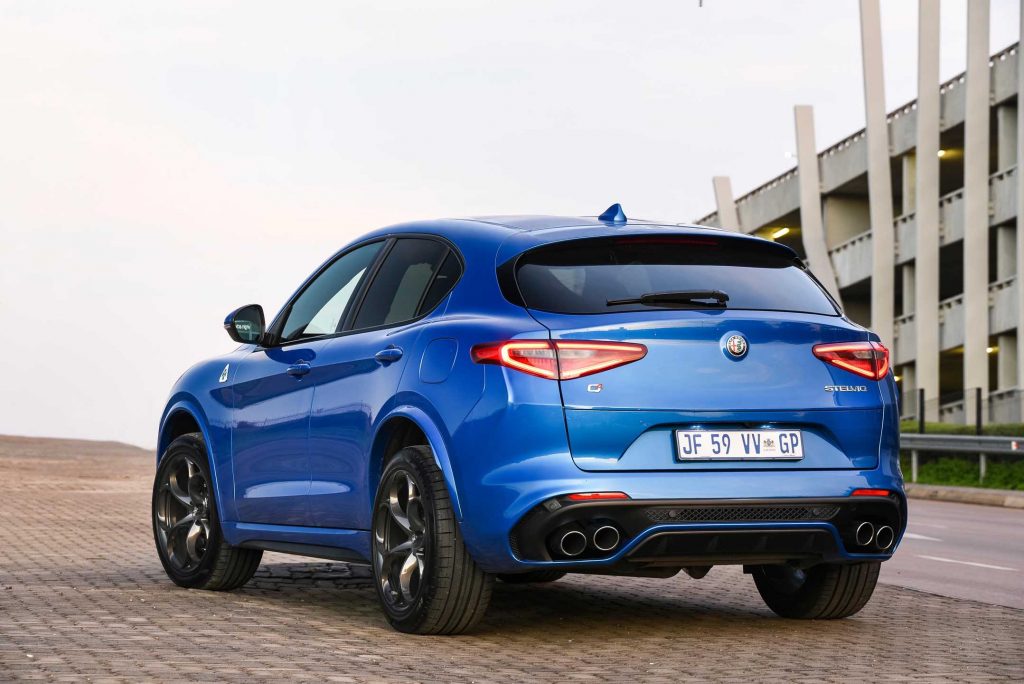 Built on the same platform as the Giulia, the Stelvio can be loosely described as the SUV variant of the Giulia boasting a higher centre of gravity and all-wheel-drive traction. In the instance of the Q version, it even shares the 2.9-litre twin-turbo V6 powerplant that pushes out 375 kW and 600 Nm through an 8-speed transmission. It takes the fight directly to the BMW X3M, Mercedes-AMG GLC 63 S and Porsche Macan Turbo. Right through my test tenure, the Stelvio Q performed quite admirably with no technical issues to mention.

HOW DOES IT PERFORM?

The Stelvio Q manages to meld all the right ingredients to arrive at one of the most satisfyingly good performance SUVs I have yet experienced. For starters, the sitting position is spot-on with the driver’s seat displaying a great scope of adjustment, even affirming my preferred low-seating position. That leather and Alcantara wreathed steering wheel is nicely weighted and incisive in changing the Stelvio’s direction. 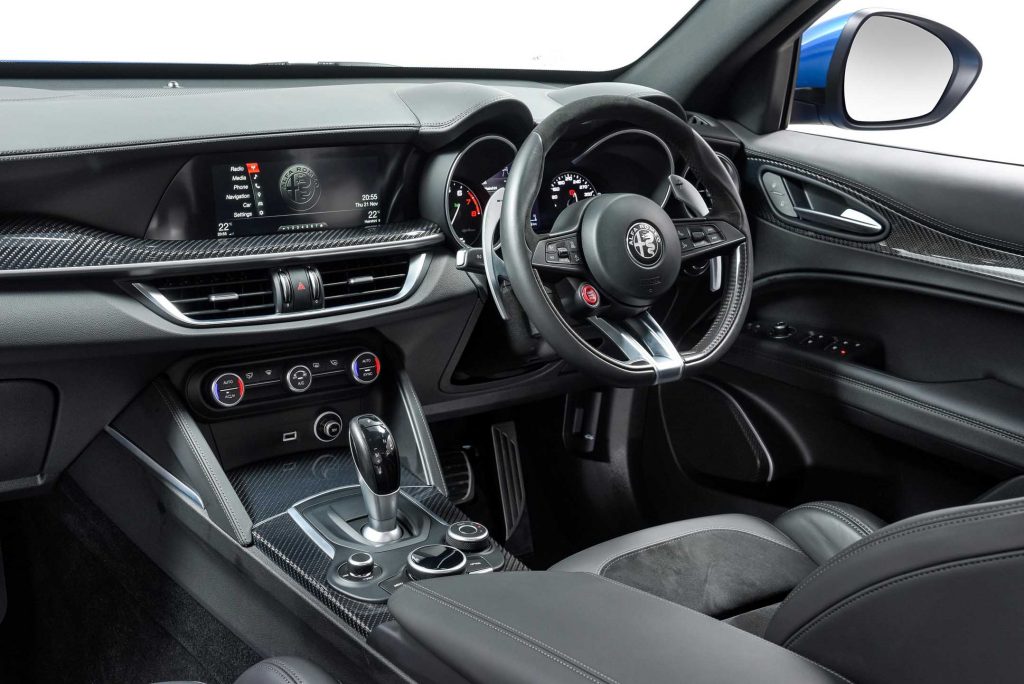 Then there’s the stupendous handling that sees this thing corner with the verve of a hot hatchback rather than a towering SUV. You find yourself aiming for the apex of a corner tighter than your previous attempt and the thing just tucks its nose in and oblige to your whims. Front-end grip in particular is prodigious and body roll is something not in the Stelvio Q’s lexicon.

WHAT RESIDES UNDER THE BONNET?

Powering the Stelvio Q is the Ferrari-developed 2.9-litre V6 twin-turbo that traces its roots back to the 3.9-litre V8 twin-turbo engine that nestles under the Ferrari Portofino, but with two cylinders lopped off. In the Alfa application, it remains a characterful, chatty mill with oodles of shove in the mid to upper reaches of its rev range. At low revs, it behaves as an unassuming motor that manages the mundane day-to-day urban traffic with aplomb. However, switch drive mode from the default normal to the more dynamic race mode and the vehicle’s character swaps its brogues for spikey running shoes. The mode also neuters the traction control altogether, although the all-wheel-drive still manages high levels of grip, even in inclement weather conditions.

There’s also the gravel V6 exhaust note that layers a deliciously fruity and mellifluous track that eggs you to make it sing while rowing through the gears via the ergonomically pleasing and exquisite metal paddle shifters. It is, unequivocally, the best sounding modern V6 engine in my small book. Even on standard steel brakes, the Stelvio stops very well with a consistent brake pedal and very little fade exhibited. You could, of course, specify the more robust carbon-ceramic brakes, but the standard brakes should suffice for road driving conditions.

Following my rather disappointing drive in the Giulia Q, I was expecting some of that car’s technical gremlins to rear their ugly. But not this time around. The Stelvio Q is simply one of the best performance SUVs I’ve driven – rating right up there with the Mercedes-AMG and Jaguar F-Pace SVR. In fact, so good it was, it simply overshadowed the BMW X3M to an outright eclipse. And that, if little else, speaks large volumes of the Alfa Romeo Stelvio Q’s impressive performance disposition.