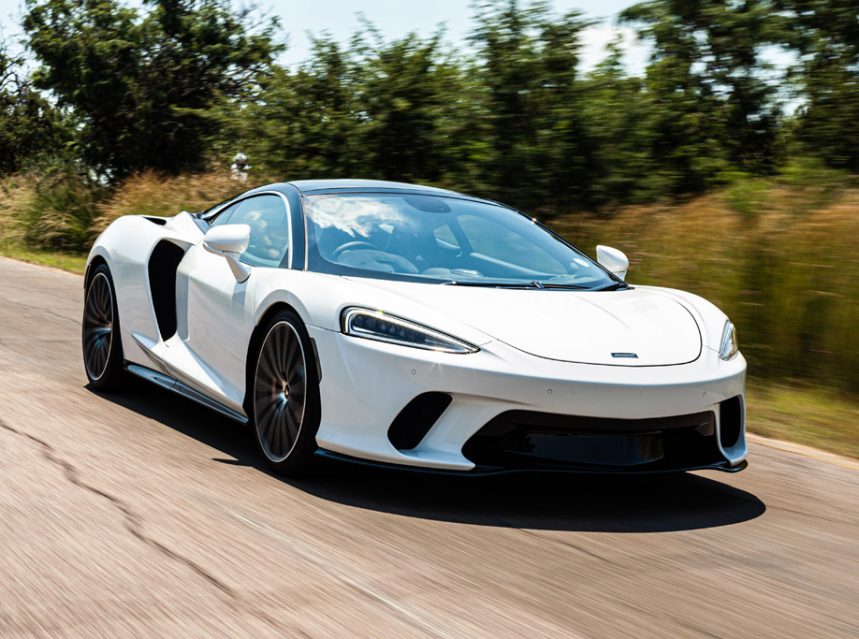 Each McLaren road car to date has set a benchmark and lifted the performance bar to loftier heights in each of its respective segments. From the inimitable F1 to the 12C, the 675 LT, P1, and even the 720 S – they’ve all been, in no uncertain terms, instrumental in rewriting the high-performance car rulebooks.

Now the firm has geared up to net a slightly more mature buyer who appreciates outright performance, but also the plusher and cushier side of high-end motoring. Enter the McLaren GT, which takes the fight directly to the Aston Martin DB11, Bentley Continental GT, and sundry. Lerato Matebese recently got behind the wheel of McLaren’s Continental crusher (no pun intended), to see how it fares

Going up against one of the stalwarts in the Gran Turismo segment takes some doing and while there have been a great number of advocates vying in the segment, the Bentley Continental GT continues to be the perennial GT model, and the one to beat as it were, there’s another contender to the throne. The McLaren GT, as its name suffix eloquently alludes, is the marque’s most comfortable and plushest-yet offering, and the one to take on long trips should the mood take you. 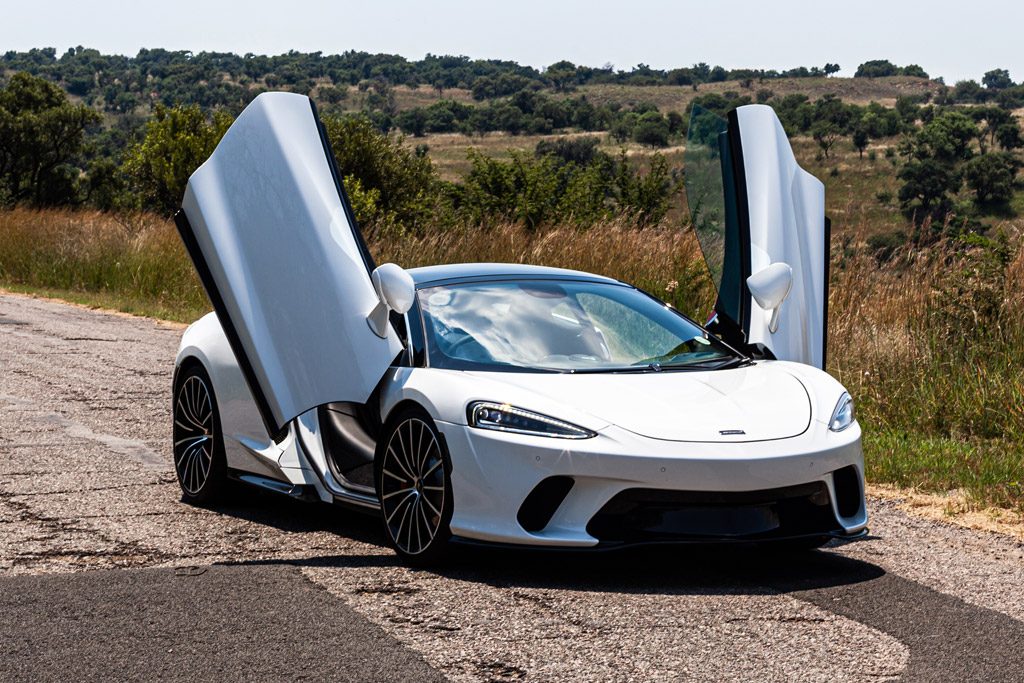 WHAT SETS IT APART FROM ITS SIBLINGS?

For starters, the GT boasts a slightly wider profile to offer a tad more room for both driver and passenger, while the overall length has also been elongated somewhat to offer additional luggage space – over and above the 150-litre boot up front – there’s a parcel shelf located just behind the occupants that measures a relatively generous 420-litres, and is accessible via an electrically operated boot lid. The rear boot is enough to accommodate a set of golf clubs or two medium weekend bags. You can also opt for a cargo net to secure everything in place, which is highly recommended. 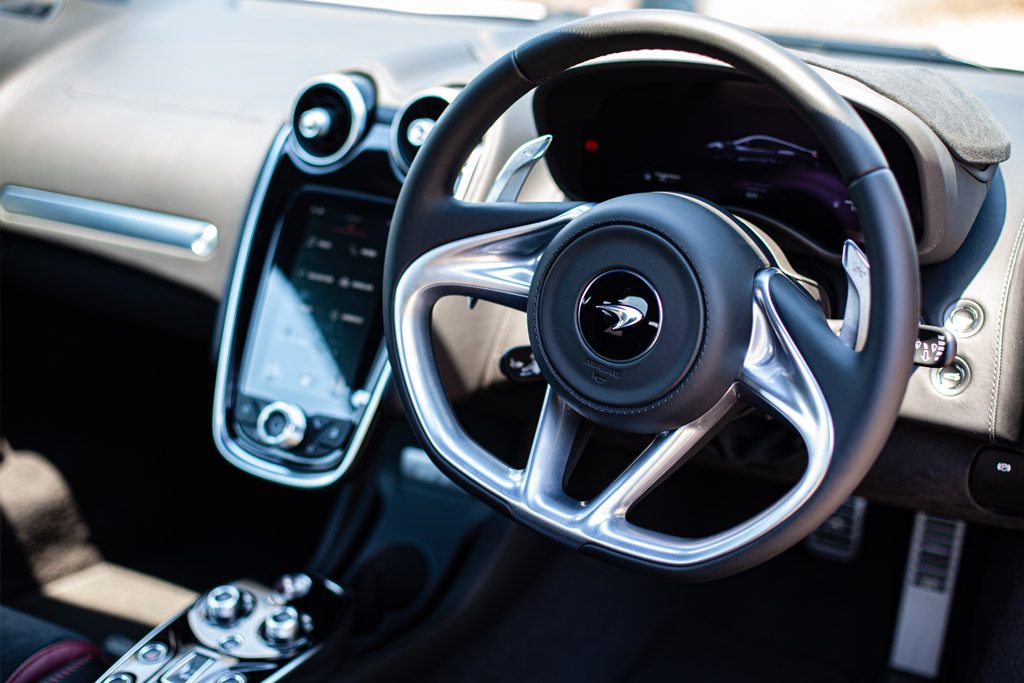 Accessing the cabin via the dihedral doors (that open outwards then upwards for easy ingress and egress in tight spaces), the cabin is festooned with the highest quality leather, the sumptuous seats are electrically adjustable, while the new IRIS infotainment system has been further modified with better resolution and an even more intuitive user interface.

Even the Bowers & Wilkins speakers are shaped in the McLaren motif, adding another touch of elegance to the cabin. The rest of the interior is familiar McLaren fair with the instrument cluster and hydraulically assisted steering wheel, which offers excellent driver feedback.

Much like the 720 S, the GT is also powered by the Ricardo-designed  4.0-litre twin-turbo V8, dialled back slightly in this application to still serve up hefty 456 kW and 630 Nm. This, according to McLaren, was to give the vehicle a slightly more relaxed driving experience and, together with the cleverly calibrated 7-speed dual-clutch gearbox, is geared for more low-down torque response.

The suspension, meanwhile, has been tweaked for comfort and negotiates well with scarred urban roads and speed bumps alike, despite the low-profile tyres shod to the vehicle weighing in at 225/35/20 and 295/30/21 front and rear respectively.

HOW DOES IT FARE OUT ON THE ROAD?

Cranking up the engine still emits the signature McLaren roar that settles into a rather refined idling timbre. The view out the windscreen and side windows is superb, and getting acclimatised to the GT is quite an intuitive affair. Of course, you remain low-slung in your seat, but the actual pews do offer excellent side and lumbar support far better than any other McLaren I’ve driven thus far. And the way the suspension breathes with the road is quite commendable, with only the most treacherous of undulations tend to unsettle the car somewhat.

That said, find some coiling roads like those along the R511 towards Hartbeespoort in the North West, flick the drive mode into Sport or Track, and summon the GT’s sportier DNA to the fore. It feels and behaves much like its sportier siblings and this is where the GT simply creams the opposition in my view. You see, while it manages to cosset both occupants in the lap of luxury and comfort, it still harbours a well-sorted, rewarding driver’s car at its core.

It punches forwards with a Mike Tyson-like zeal to romp from rest to 100 km/h in 3.2 seconds, passes the 200km/h mark in 9 seconds, and only relents those rolling punches at a heady 326 km/h. So, the McLaren GT also has the legs to keep up and even obliterate some thoroughbred exotic cars. Thankfully, it also stops on a whim, thanks in part to the 367 mm front and 354 mm rear steel brakes that succinctly rein-in the vehicle from speed – carbon-ceramic brakes can be optioned, though, but I reckon the steel brakes more than suffice in this application. 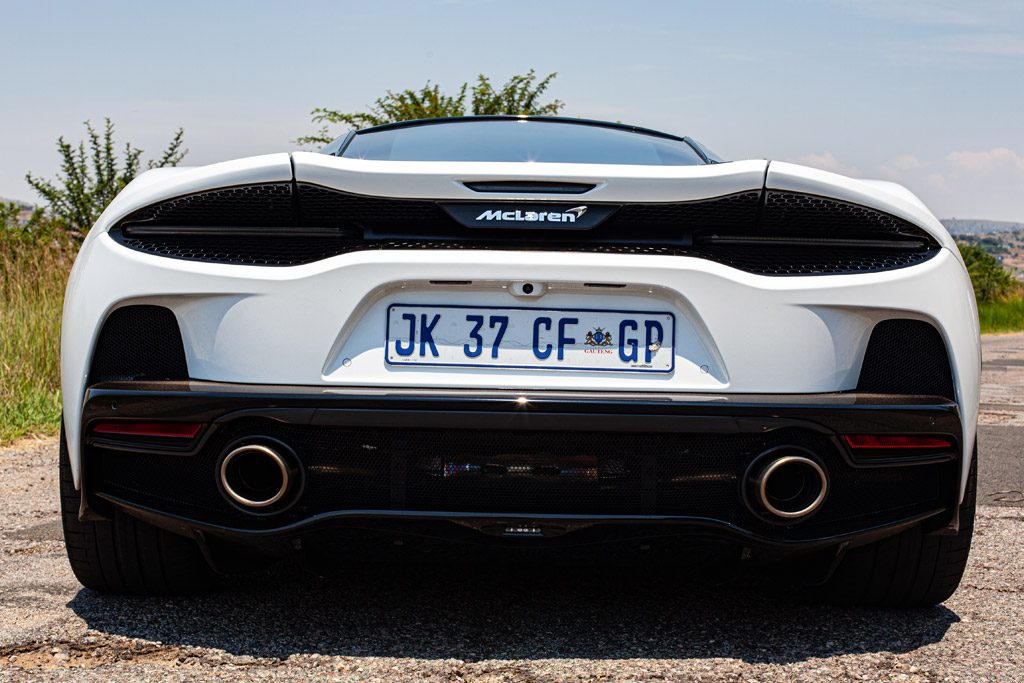 Having finally sampled it, I now see where it fits into the company’s product hierarchy. The GT is the most comfortable modern McLaren yet, and can easily be used daily should the need arise. However, where its prowess truly glistens, is in the way it amiably blends comfort with searing performance in one package. This trait, to me, makes it unequivocally the most well-rounded McLaren currently on sale and a fitting proposition to that adage of an iron fist in a velvet glove.