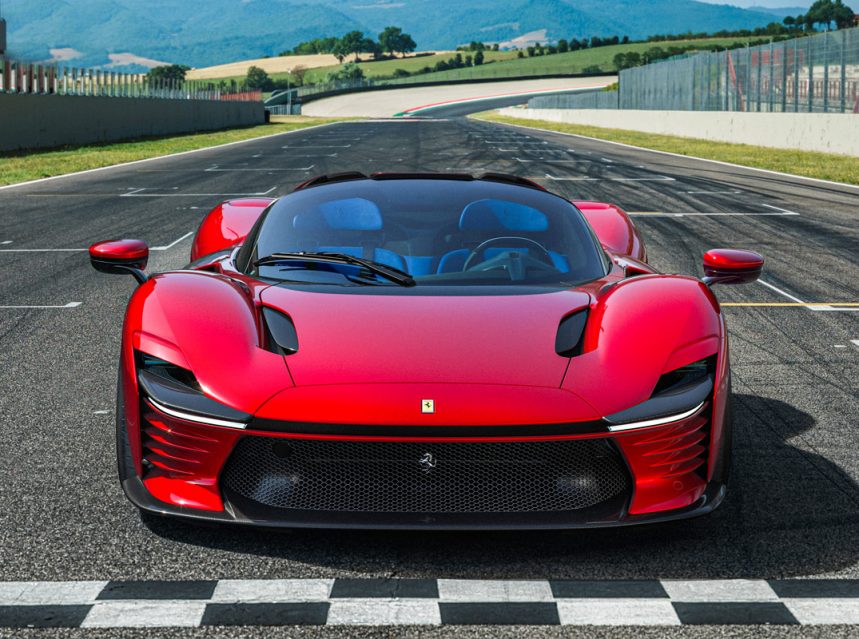 A Homage to Past Icons |

The Ferrari 330 P3/4 perfectly encapsulated the spirit of the sports prototypes of the 1960s; a decade now considered the golden era of closed wheel racing. The limited-edition Daytona SP3, the third model in the Icona series, pays homage to these racing icons that helped earn the marque its unparalleled motorsport status.

It was at Killarney in November 1968 that I first saw the Ferrari 330 P4 in action. It was the green David Piper machine, and I thought it was the most beautiful racing car I’d ever seen. I was still a young, impressionable schoolboy back then, but my opinion has not changed even now, 50 odd years later.

The race that day was won by another P4 derivative, the Gunston-liveried 350 Can-Am in the hands of Paul Hawkins. This victory in the local Springbok Series followed less than two years after Ferrari pulled off a most remarkable feat by taking the top three places at the 24 Hours of Daytona, the first round of the 1967 World Sports Car Championship.

The three Ferraris that shot past the chequered flag in legendary side-by-side fashion on Ford’s home turf on 6th February 1967 – a 330 P3/4 in first place, a 330 P4 in second and a 412 P in third – represented the pinnacle of development of the Ferrari 330 P3. It was also perfect retribution for the Ford victory at Le Mans the previous year.

The Daytona SP3, presented at the Mugello Circuit during the recent Ferrari Finali Mondiali, is the third limited-edition model in the Ferrari Icona series after the Monza SP1 and SP2. Its design is an interplay of contrasts, with sublimely sculptural, voluptuous surfaces alternating with sharper, aerodynamic lines to reflect the lines of the 330 P4, 350 Can-Am and 512 S racers, and its Targa body with a removable hardtop was also inspired by the sports prototypes.

Its clean double-crested front wings nod to the sculptural elegance of the 512 S, 712 Can-Am and 312 P, while two bumperettes reference the aero flicks featured on the 330 P4. The wheel-arch shapes compliment the geometry of the flanks, and the pronounced surface of the butterfly doors – which also manage airflow from the front wheels – has a surface treatment recalling that of cars such as the 512 S.

The rear flank swells out from the sylph-like pinched waist, wrapping around the front of the wheels before tapering back towards the tail. A series of horizontal blades complete the rear bodywork, lending the Daytona SP3 – created by Ferrari chief designer Flavio Manzoni and his Styling Centre team – a futuristic look incorporating signature Ferrari design cues.

Even so, the demands of modern aerodynamics – as encapsulated by the two imposing wings with outer and inner crests that dominate the front – undermine the overall Ferrari P Series homage to the Daytona SP3. In my view, the one-off 2006 Ferrari P4/5 by Pininfarina, commissioned by James Glickenhaus (see our Milestone article on page 80), is still the most striking tribute to the original P3/4.

The Daytona SP3 is powered by undisputedly the most iconic of all Maranello’s engines. The naturally aspirated V12, taken from the 812 Competizione, has been relocated to the mid-rear position to optimise the intake and exhaust layout as well as the fluid-dynamic efficiency, resulting in the most powerful internal combustion engine ever built by Ferrari.

The power gain – courtesy of a more compact intake system, optimised cam profiles, an improved direct injection system (reducing emissions by 30% compared to the 812 Superfast) and a new variable-displacement oil pump – is enough to propel this Icona model from 0-100 km/h in 2.85 seconds and 0-200 km/h in 7.4 seconds up to a maximum speed of over 340 km/h!

The SP3 chassis is built entirely from composite materials using Formula 1 technology, and the seat is an integral part of the chassis to reduce weight and keep the car’s height to 1,142 mm. Other unprecedented features, such as chimneys that extract air from the underbody, make this the most aerodynamically efficient car ever built by Ferrari without resorting to active aero devices.

The increased power output of the F140HC meant a corresponding increase in thermal power needed to be dissipated. At the front, detailed work went into the fan housing design, the opening on the underbody to evacuate hot air and the intake duct. The flanks’ design made it possible to integrate the side channels into the doors, allowing the intake ducts for the radiators to be moved forward.

Besides the blown geometry of the front bumpers managing airflow over the flanks, the spoke profiles of the wheels also contribute, as does the vertical design of the flank itself. The underbody developments were designed to boost the entire floor airflow performance, with a series of devices generating localised vorticity.

The engine cover design, with a central backbone structure, channels fresh air into the engine and provides outlets to vent hot air from the engine bay. Most importantly for downforce, the rear spoiler’s lip was lengthened, and the spoiler was extended to occupy the car’s entire width.

In addition to its bespoke suspension, a new P Zero Corsa tyre was developed with Pirelli, optimised for both dry and wet performance, with a particular focus on stability in low grip situations. The new Icona is also equipped with the latest version of Ferrari’s SSC, which includes the FDE (Ferrari Dynamic Enhancer) to increase cornering performance.

The cabin also takes its inspiration from the 330 P3/4, the 312 P and the 350 Can-Am, with the main idea being to broaden it visually by creating a clear break between the dash area and the two seats. The dash is minimalist yet functional and contemporary, and the integrated seats (with driver’s adjustments taken care of by an adjustable pedal box) blend texturally with the surrounding trim.

Leather padding on the door panel strengthens the connection with sports prototypes and accentuates the wraparound effect. The gearshift gate on the central tunnel is similar to the SF90 Stradale’s, and the steering wheel features touch controls for 80% of all functions, while a 16” curved HD screen relays all driving-related information instantly.

As part of Ferrari’s Icona series of high-performance cars, only 599 examples of the Daytona SP3 – the first limited edition Ferrari with a naturally aspirated engine without hybrid electric systems since the Ferrari Enzo of 2002 – will be built.

Celebrating Ferrari’s history by reinterpreting the timeless styling of some of the most iconic cars from the Prancing Horse marque to radically modern effect using the most innovative materials and technologies available today, the Daytona SP3 is now available for a cool $2.25 million each (about R35.5 million) – and most have already been accounted for.