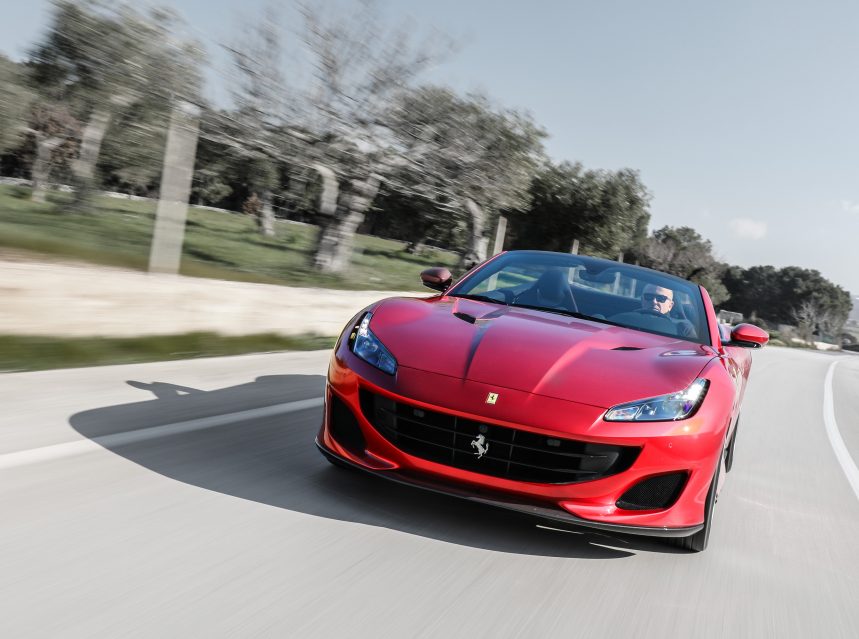 It broke new ground with several firsts, did the Ferrari California, when it was launched at the Paris Motor Show in 2008. Despite being the most significant direction adjustment for Ferrari in recent years, its looks never quite stirred the loins in the way of its namesake predecessors, the late-1950s Ferrari 250 GT Spyder California and the 1960s 365 California.

What it had going for it was a laundry list of innovations and distinctions, including being the first road-going Ferrari to feature a front-mounted eight-cylinder engine, a seven-speed dual-clutch automatic gearbox, direct fuel injection, and a power-folding hardtop.

Yes, they were all brand firsts, back then, delivered in a car that was, well, best described as ‘doughy’.

Not that customers found the California to be anything but enticing, enough so that it would eventually become one of the best-selling Ferraris of all time. Besides selling in their numbers – a job made easier for Ferrari marketers by the uncharacteristically low price tag – the California also had another effect on the Ferrari brand.

It introduced thousands of new customers to the Maranello sports cars brand: buyers hungry for an everyday driveable Ferrari with lots of tech on-board.

In 2014, Ferrari eventually updated the California with brand new sheet metal, a new interior and revised chassis, and a new turbocharged powertrain – a technology Ferrari last used on a road car in the F40.

Despite its pedestrian appearance, the car became a performance star in its own right, paving the way for an even better, and sharper, looking GT car down the line.

The Ferrari brand thrives on heritage, and looking at the new Portofino its lineage is immediately evident. In line with having ditched the car’s North American geographical reference in favour of naming the new car after the glitzy Italian coastal town on the Mediterranean, Ferrari designers also abandoned the Cali’s upright, rounded look for the elegantly defined Portofino.

Ferrari engineers, on the other hand, retained much of the donor car’s under-the-skin wizardry, including the engine, dual-clutch gearbox, and rear differential (although this is now clutched, and electrically commanded).

Challenged to evolve the roadster concept into a true GT tourer, Ferrari’s team of designers have primarily retained the California’s dimensions – it sits only 2.5 mm lower, is 28 mm wider, and 17.8 mm longer – but the final product looks light years removed from its predecessor.

Specifically, the windscreen is set to further back, creating the impression that the nose is longer and the cockpit larger. Another critical development challenge was to improve the cars closed-top appearance with a fastback design, something that no manufacturer has managed to do properly.

On most retractable hardtops the roof panel is short and clumsy, the rear long and majestic. The Portofino’s roofline is significantly longer, flowing into the rear of the car to create a near perfect fastback. When open, a pair of raised fairings extends from each rear headrest into the boot lid to break the rear’s visual mass.

Also, by moving the rear light assemblies into the wings, the tail has a much leaner, more athletic look.

In the final analysis “there are no longer three, but two boxes” to the design of the Portofino, says Ferrari design chief Flavio Manzoni, which is by far the most significant departure from the norm with this type of GT car.

The Portofino is punctured by many intakes and vents in the front bumper, on the bonnet, and along the front fenders. Indeed not merely for show, the functionality of each intake is key to the car’s aerodynamic success. In an interview with Auto & Design magazine, Manzoni describes the Portofino as being “full of aerodynamic mischief and tricks, helping it achieve an excellent balance between Cx and downforce”. For example, thin vertical slats that run along the outside edge of each headlight unit feed air into the wheel well to force pressure out from the wheel spokes, reducing drag.

Despite the dual air vents on the bonnet that expel engine heat, and the front outboard intakes that feed air to the more powerful Portofino’s two intercoolers, Ferrari claims that the car achieves a coefficient of drag of only 0.31.

Ferrari’ brilliant F154 engine family of modular twin-turbocharged, direct injected V8 petrol engines has become an evergreen solution for Ferrari (and Maserati) road cars. Designed and produced by Ferrari since 2013, the F154 engine has the distinction of being the first turbocharged Ferrari road engines since the 1987 2.9-litre F120A V8 of the Ferrari F40, which replaced the naturally aspirated Ferrari/Maserati F136 V8 family on both Maserati and Ferrari cars.

Used to brilliant effect in the 488 GTB and Spider, and more recently on the GTC4Lusso T as well, Ferrari gave its blown V8 29 kW more than the California T by revising the pistons and con-rods, adding a lighter air intake manifold, and fiddling with the engine management software. Larger-diameter pipes and single-piece exhaust headers with integrated twin-scroll turbochargers all play their part to make this pony go quicker than ever.

Also still present is the Cali’s seven-speed dual clutch albeit with adjusted ratios to cope with the increase in power. Power is sent to the new E-Diff differential, which allocates it selectively to the rear tyre with the most grip.

Ferrari reckons the combination of more power, recalibrated gearing, and better control of where the power goes will see the Portofino to 100 km/h from zero in 3.5 seconds flat. With more torque on-board too, there is no doubt that the car’s top end of 320 km/h will likely also arrive in the blink of an eye.

Not that we would, or could, put this theory to the test on the patchy roads of Italy’s Apulia region where the international media launch event took place. Reduced to occasionally challenging the E-Diff and the F1-Trac traction-control system under full-throttle launches, we noticed some wagging of the Portofino sexy derriere, but little to no wheel spin, as engine torque shuffled between the left and right rear wheels in search of grip.

Where it would really count for Portofino buyers, is how capable the car is blasting out of low-speed corners. The E-Diff delivered a solid repeat performance, aided by the electronic limiting of available torque output by the engine management system.

From first-, through second-, and third gears, peak torque is limited, and from fourth to sixth, the computer gradually feeds more to the rear wheels. Ultimately, only seventh gear receives the full monty of available torque.

In most instances the transmission can happily be left to its own devices, it seldom misses a beat. Under maximum acceleration in Sport mode – which we habitually combined with eager tugging at the steering column-mounted paddles shifters – the Getrag-designed gearbox seemed to jolt through shifts between the lower gears. Coming off the very high standards set by the Portofino’s other powertrain components, this was the car’s only significant weak point. Being an everyday driving car, however, the Portofino is unlikely to be subjected to brutal acceleration often.

Achievements in the Portofino’s interior include a new infotainment system that we found easy to operate, if you’re used to the system in either the GTC4Lusso or either of the 488s. It responded rapidly to inputs and, like the GTC4Lusso, has an optional touchscreen mounted directly ahead of your co-pilot.

It’s more than a gimmick according to Ferrari, who wants the extra touchscreen to improve the driving experience for the passenger by allowing them to view basic driving information, enabling your co-pilot to observe speed, gear selection, and other performance metrics—or to modify navigation waypoints and send them to the central and driver displays.

According to Luca Casarini, head of interior design, an improvement in ergonomics and comfort was “the starting point for the cockpit”. The architectural approach, explains lead interior designer Fabio Massari, develops more horizontally than in the GTC4, with a new infotainment system and a repositioning of the air inlets: “Lighten and recompact the volumes, trying to break down the dashboard to reduce the perception of its height”.

Beyond the design-speak, the cabin is perceptibly roomier than the Cali. We’re told that this is due to the new magnesium front seat structure, which saves as much as 50 mm in the cabin – a significant feat. Ferrari has indicated that the new seat architecture will also be adopted in future models.

The Portofino’s clean slate redesign identified and shed 80 kg of surplus weight from the California T’s engine and body structure. Not only lighter but also stiffened by 30%, the new car feels significantly stiffer, although certain anomalies are inevitable in this kind of convertible hardtop car. We found some chassis flex when negotiating steep inclines at low speeds, and scuttle shake on some poorly surfaced roads during our launch drive.

Of course, Ferrari makes adaptive magnetorheological dampers available on the Portofino. Flip the steering-wheel-mounted manettino driving-mode switch between Comfort and Sport, and the dampers deliver a composed ride and unmatched body control either way.

Ferrari also introduces electrical assistance to the steering system – the second car to do so after the 812 Superfast. Although this was our first introduction to Maranello’s electrically boosted steering mechanism, Ferrari claims that steering is now 7% quicker than in the California. It’s hard to tell how, exactly, such a relatively minor difference will play out in real life without driving the cars back to back. Driver feedback is positive, with the steering feeling light and direct enough when aiming the Portofino into tight corners. It would be a gradual loss, though, should the rear step out at some point – a distinct possibility considering the Portofino’s rear-biased weight distribution of 54% and loads of grip at the front. Luckily, carbon-ceramic brakes with reassuring stopping power, which are great for fixing misunderstood signals from your internal gyro, will bring things to a swift, and very controlled, halt.

The Portofino represents a solid improvement over its predecessor, in almost all aspects. Not only is it dynamically sharper and more covetable, but it will also appeal to its target audience’s need for more daily-driving practicality – a more substantial boot, extra rear legroom, better infotainment, improved efficiency, and a new roof that operates on the move – rather than all-out performance.

Indeed, any car with the Cavallino Rampante on its nose will ultimately be judged by its all-out performance credentials, and the Portofino will not escape this fate. If you’re planning on driving it at ten tenths, and expect 812 Superfast responses, you may not like the turbo V8.

If, on the other hand, you’re realistic about what the Portofino represents, and appreciate its sculptural beauty and technological achievements, you will love this grand tourer for a very long time.