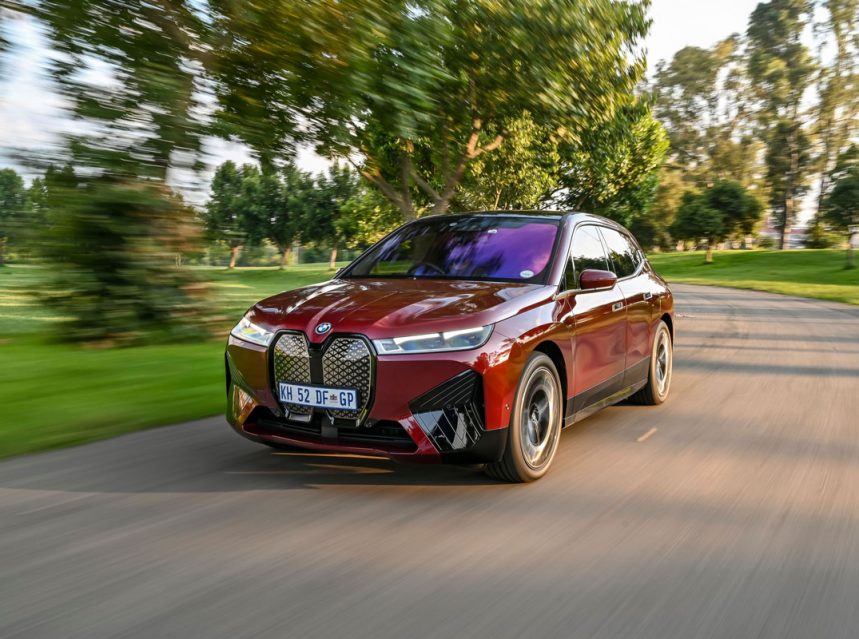 The highly anticipated and extremely capable BMW iX xDrive50 heralds a new era for BMW battery-electric vehicles in South Africa, and we spent a few days discovering how this mid-size SUV will revolutionise the driving experience in the luxury segment.

“You never change things by fighting the existing reality. To change something, build a new model that makes the existing model obsolete.” – Richard Buckminster Fuller

American architect, designer, inventor, philosopher, and futurist, Richard Buckminster Fuller, may have been stating the obvious when he surmised that change simply is a factor of reinvention, but it rings truer now than ever before as the world enters a new phase of electric mobility.

For BMW, the iX xDrive50 spearheads the brand’s push towards this future in South Africa, and as much as Fuller’s geodesic dome defined the architect’s legacy, the iX will undoubtedly do the same for the Munich-based luxury carmaker.

At first glance, the iX xDrive50, and its more affordable sibling, the xDrive40, are styled like no ICE car in the BMW stable. Since change is most relevant when it is significant, based on its design, for now, the iX is likely to find fewer sympathetic eyes from local BMW fans than in the more progressive American or Chinese markets. But that will change as the tastemaker-buyers, to whom the car is targeted, drive its mainstream acceptance. The recent furore over BMW’s ever-expanding kidney grille is an excellent case in point.

By no means does its provocative design make the car less interesting to look at. If the surprised stares and impromptu conversations struck during the time I tested the iX are anything to go by, South Africans are fascinated by its sheer difference, and are ready to accept the progress that it represents. The iX signifies a watershed moment in production car design that is, perhaps, best encapsulated by the car’s polarising looks.

The iX form is mostly a product of its engineering demands. The need for extreme aerodynamic efficiency, coupled with vastly different dimensional requirements for the drivetrain, informs almost every aspect of its design. For example, without the need for air to cool an ICE engine and no driveshaft encroaching on the interior, BMW’s chief iX designer, Tianyuan Li, had almost free reign to create something special. This is evident from the self-healing plastic kidney grille and futuristic LED lights all around, to the cavernous interior, where sustainable new-age materials and ingenious use of surfaces are some of the interior highlights of the iX.

Poised delicately on the leather-covered dash, the oversize curved infotainment and digital instrumentation screen is another high point. Perfectly positioned for touch engagement, the screen grants access to an extensive digital interface that controls everything from interior lighting to drivetrain options, with the iDrive controller – set in an open-pore wood veneer panel that also houses embedded drive mode buttons – mainly playing a secondary role for system access.

The electrically-adjustable front seats, although beautifully crafted and supremely comfortable, don’t offer the level of lateral support one would find in other BMWs capable of such significant speed and agility as the iX, but bear in mind that this is a luxury SUV rather than a hurried performer, despite its nimbleness.

Vast swathes of glass all around ensure that light evenly floods the cabin, while the electrochromic panoramic roof can be regulated between transparent and opaque at the touch of a button when the African sun beats down. On that note, independent climate control for front- and rear passengers takes care of comfort in the cabin, while rear passengers each get a USB port for smartphone charging.

Underscoring the car’s versatility, luggage capacity is claimed at 500 litres (more than the BMW X5), which compares well with the equivalent Audi e-tron 55 quattro S Line and outpaces the Jaguar I-Pace EV400 AWD.

The iX50 and the iX40 differ mainly in the capacity of their lithium-ion batteries and subsequent output. The iX50, fitted with a 111 kWh battery (with a useable capacity of 105,2 kWh), offers a range of 630 km (WLTP), which is substantially more than the 372 km of range for the iX40 that carries a smaller battery with a usable capacity of 71 kWh. However, the iX50 comes at a significant price premium of close to R500,000 over the iX40.

It also begs a mention that the iX is longer than its X5 stablemate by 25 mm, although it stands slightly lower-slung by around 30 mm.

A DREAM TO DRIVE

For several reasons, the iX driving experience cannot be compared to any ICE alternatives. For one, the absence of an engine and mechanical drivetrain excises virtually all noise, vibration, and harshness (NVH) from the cabin. By adding next-level cabin insulation, a subtle yet satisfying electronic soundtrack from the car’s two electric motors (courtesy of Oscar-winning film composer Hans Zimmer), and a supremely forgiving adaptive air-suspension system, BMW has almost reimagined the driving experience altogether.

With the ability to deliver both dynamically when cornering hard, and to neutralise the effects of Gauteng’s poor road surfaces, the iX delivers one of the most composed driving experiences of any luxury car.

Encapsulating what the iX represents as a luxury vehicle in one article will hardly do the Bavarian starship the justice it deserves. As a springboard to BMW’s electric future, it does almost everything right, and as an urban-focussed premium SUV, it has even fewer faults. It may draw criticism from the mainstream for its looks, but considering what it represents, and how far BMW has pushed the envelope on this car, it has all but surpassed even Munich’s greatest expectations. For these reasons, I know that, if Richard Buckminster Fuller were alive today, he would likely agree that this new model succeeds in making most existing models obsolete.