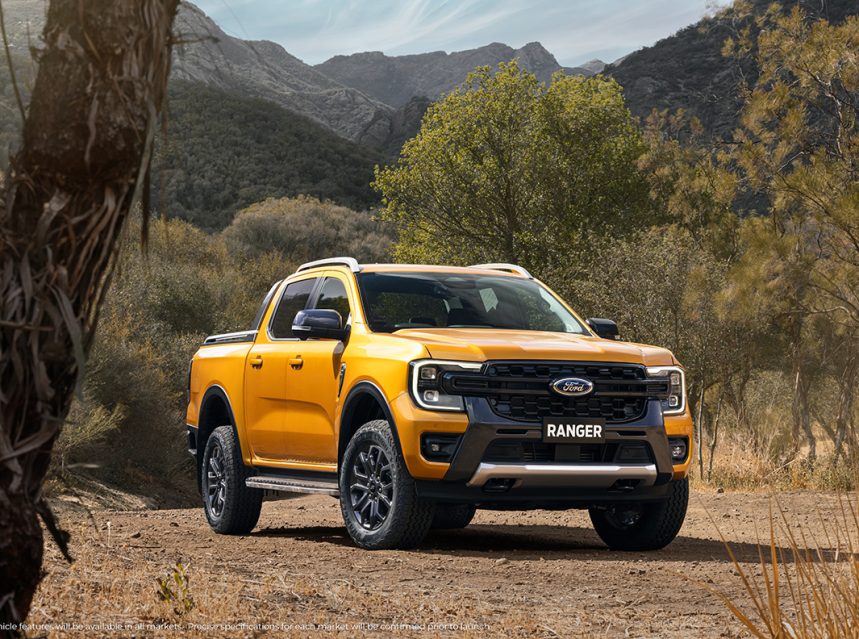 “Which is the best bakkie?” That is the one question guaranteed to initiate heated arguments. As South Africans, we love our bakkies, and we are fiercely brand loyal, perhaps even to our detriment. The brilliance of the current Ford Ranger is undeniable, and now, with the introduction of the all-new 2022 Ford Ranger, those “best bakkie” arguments are about to become even more heated.

With the pickup truck segment shifting into the lifestyle segment, premium aesthetics play a more critical role in modern pickup truck design. The outgoing Ford Ranger,  regarded as an attractive vehicle, ranks high in this segment. Through intensive consumer consultation, whose input led to the launch of the next-gen Ranger, Ford is confident that this model is certain to meet the demands of its customers. To this end, Ford will also be releasing several special editions.

With its new design borrowing from the American Ford line-up, the next-gen Ranger affords the Ranger the aggression it needed. Upfront, the pickup gets an entirely reworked fascia. A larger redesigned grille and bumper is nestled between redesigned headlights adorned with F-150-esque C-shaped daylight running lamps. This is also the first time the Ranger receives Matrix LED headlights. The bonnet is flat, which gives the bakkie a squared-off nose. The side profile gets a more robust shoulder line, a functional air outlet preceding the front doors, and fixed side steps.

The rear also sees notable changes in the form of redesigned lights that mirror the design signature in the front, and a contoured tailgate with the Ranger brand name embossed on the metal. The central brake light has also been moved from the roof to the tailgate, where a canopy can no longer obscure it. The tailgate itself doubles as a workbench, and comes with a built-in ruler and clamping points to house tools. Ford has also installed steps at the rear wheels, affording easy access to the rear load bed. The bed-liner comes coated in a plastic moulded bed liner.

Overall the new Ranger is 50mm longer and 50mm wider, gaining practicality and providing aesthetic benefits. There are also several new 17” to 20” alloy wheels to select, together with numerous accessories that can be fitted after purchase. The next-gen Ranger comes in three trim levels, XLT, Sport and Wildtrak.

In addition to giving the new Ranger a more distinguished appearance, Ford upgraded the interior. The new Ranger sports a redesigned dash, dominated by the 10.1 (or 12-inch in higher trims) portrait-oriented infotainment screen taking centre stage on the dash. The new unit houses Ford’s latest Sync4 system, with an intuitive interface and voice-activated communications, entertainment and infotainment functionality. Fitted with a modem that enables connectivity via the FordPass smartphone app, the driver is afforded a host of remote features like remote start, vehicle status check, and remote lock and unlock features. In line with the new tech-focused cabin, Ford also included a wireless charging pad.

Depending on the vehicle’s trim level, the instrument cluster can also be exchanged for a fully digital interface. An electronic handbrake replaces the manual handbrake, and a new e-shifter has been fitted. Ford also increased usable storage space throughout the cabin. The aforementioned 50mm increase in length and width also expands passenger space, legroom and shoulder room.

Those who subscribe to the ‘bigger is better’ school of thought will be pleased with the new Ranger’s 3.0-litre turbodiesel V6 option. Further options include a single-turbo or bi-turbo 2.0-litre inline four-cylinder diesel engine. The new Ranger will also be available with a 2.3-litre Ecoboost four-cylinder petrol engine. All the engines can be equipped with either an updated 10-speed automatic or a choice between a six-speed manual or automatic transmission. The new Ranger also comes with a choice of two four-wheel-drive systems, an electronic shift-on-the-fly system, or an advanced full-time 4×4 system with a reassuring set-and-forget mode, designed for proficiency as and when required.

The next-gen Ranger also receives a few suspension and body revisions, ensuring improved performance. With the front wheels pushed forward by 50mm, resulting in a shorter front overhang, the new Ranger has an elevated approach angle and better off-road articulation. The rear suspension is also shifted outside the frame rails, affording a better ride both on and off-road.

If you have read our past editions, you will have noticed that we are avid supporters of the Ranger model in all its derivatives, due to our appreciation for arresting design and exceptional engineering. We are confident that the next-gen Ranger is sure to impress, bringing serious firepower to the fight. The refreshed look, updated powertrain, and revamped cabin make the Ranger an even more desirable option than it already is.