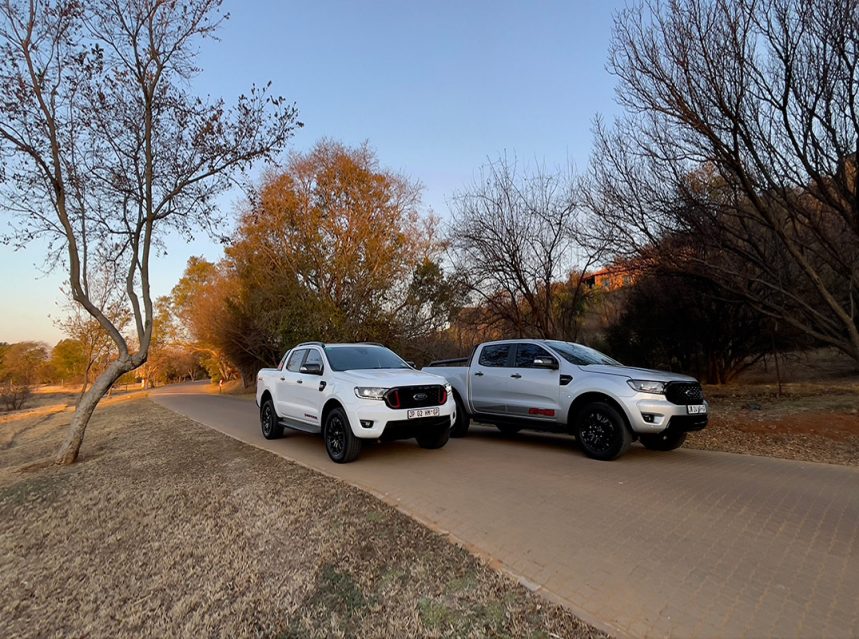 Ford has been a solid contender in the bakkie industry for decades, with their Ranger platform remaining an undisputed favourite for local buyers. In an ongoing effort to stay relevant and maintain its authority in the segment, Ford South Africa has released several specification and engine variations for the Ranger in the past year, offering as many options to their customers as possible. However, since their bakkies are all so darn good, we also suffer the agony of being spoilt for choice. Case in point is the Ranger FX4 and the Ranger Thunder. Let’s see how they compare.

Ask almost any red-blooded South African what their favourite bakkie is, and you’ll get responses ranging from the Ford Ranger to its natural competitor, the Toyota Hilux, and beyond to the Isuzu D-Max, VW Amarok, Nissan Navara, and so on. But, what all will agree on, is that the bakkie is a firm favourite for families and businesses alike.

Matters become a little more unclear where image and budget collide in the same brand, especially in the leisure market, where buyers want as much bang for their ego as possible while ensuring that what they buy is a sensible solution for their everyday driving – and sometimes for their exploring – needs.

Between the two special edition Ford Rangers that Driven had on test recently – the FX4 and Thunder – for example, there is almost a R120,000 price difference, a substantial difference in performance capability, but not massive a difference between what the two vehicles offer in terms of comfort, or aesthetics.

In this segment, aesthetics are subjective. Both bakkies offer cosmetic upgrades over bog-standard Rangers. For the FX4, these come in the form of gloss black fixtures in place of chrome, 18” alloys, FX4 stickers along the side of the vehicle, and a reworked grille borrowed from the Thunder – minus the red accents.

On the other hand, the Ranger Thunder is identifiable through the aft mentioned mesh grille with red accents, red Thunder badges along the doors, black trim instead of chrome, and 18” alloy wheels to boot. Ultimately, the choice will boil down to whether you would rather have the slightly restrained aesthetics of the FX4 or the conspicuous red accents of the Thunder.

The interiors of the two bakkies are hugely similar both in design and build quality. Both the FX4 and the Thunder sport red contrast stitching on the upholstery, together with their model designation embossed on the seats for added flair. Unlike the FX4, however, the Thunder comes with heated front seats, which have been heaven sent this winter season.

Both bakkies also feature Ford’s 8” infotainment system, which comes standard with Apple Car Play and Android Auto.  You would be hard-pressed to discern any notable differences between the two cabins. This is well and fine because the Ranger cabins are lovely places to spend time in but may be somewhat of a let-down for Thunder customers who have spent considerably more on their purchase. That said, the latter throws down the gauntlet where it matters most – upfront in the engine bay.

Here the differences between the two bakkies are substantial. On the one hand, we have the FX4, which is powered by a 2.0-litre turbodiesel engine that produces 132 kW and 420 Nm of torque. On the other, the Thunder boasts two engine options. There is Ford’s tried and trusted 3.2-litre turbodiesel mill that’s mated to a 6-speed automatic transmission that churns out 147 kW, or the Raptor-derived 2.0-litre turbodiesel that is capable of 157 kW and 500 Nm. The latter (and the FX4) is paired with Ford’s 10-speed automatic transmission and can be had in either 4×2 or 4×4 configuration. The Thunder is the clear winner in this category, as the numbers explicitly demonstrate. The substantial power increase over the FX4 is both noticeable and welcome.

There is no denying that choosing between these hugely competent vehicles would most likely be determined by price, especially in the current economic climate. Where the FX4 starts at R634,200, the Thunder reaches for the stars at R751,000.  Both bakkies are good packages for their respective price points, thus making it difficult to recommend one over the other as the power differences would usually justify their respective price tags. Yet, if power is not a significant consideration, the FX4 is much easier on the wallet. If you’re in a position to not care too much for either price or power, a flip of the coin might ease the agony of choice for you. Or, take a test drive on a cold winter morning in Gauteng, and let those heated seats, or lack thereof, decide for you…