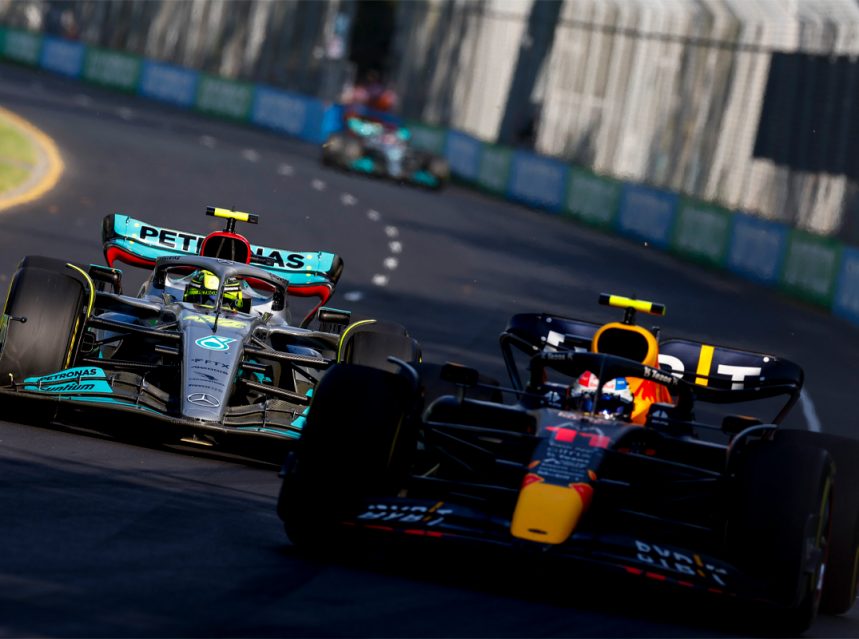 Following a dismal Australian Grand Prix, where Max Verstappen had to retire his Red Bull from a certain second position, Red Bull Racing bounced back at Imola, scoring maximum points, including fastest lap, in both the Sprint race and the Emilia Romagna Grand Prix, to close the points gap to championship leaders Charles Leclerc and Scuderia Ferrari.

Leclerc and Ferrari saw their dominance in Melbourne negated by a resounding Red Bull resurgence in Italy, with Sergio Perez playing a pivotal role in frustrating the high expectations of the red-clad Tifosi in what was supposed to be a Prancing Horse benefit on home ground.

Meanwhile, plain bad luck, as well as some frustrating errors, stunted the efforts of Carlos Sainz (Ferrari) and Fernando Alonso (Alpine) and put seven-time world champion Lewis Hamilton (Mercedes) even further on the back foot against teammate George Russell, and in terms of his overall championship challenge.

The first Australian Grand Prix in close on three years saw a capacity crowd cramming into Albert Park. After the exhilarating Ferrari and Red Bull duel in the opening races (with McLaren and Danny Rix seemingly in contention), they were looking forward to another crackerjack race.

As the lights went out, Leclerc beat Verstappen into Turn 1, with Hamilton sweeping past Perez into third place, followed by Russell and Norris. With Perez stuck behind the Brit, the Monegasque Ferrari driver and Dutch champion immediately opened a gap between themselves and the rest of the pack.

Following a Safety Car on Lap 7, Perez soon scythed past Hamilton while Norris and Ricciardo relentlessly closed the gap on the Mercedes pair.

By now, it was clear Leclerc could control the pace upfront, and when Verstappen pitted, followed by his Red Bull teammate and Norris, he stayed out, only pitting later, followed by Hamilton, on a charge to undercut Perez. Leclerc emerged with a 4.0 second lead over Verstappen, but Hamilton was marginally ahead of Perez going into the first corner.

However, the Mexican overtook Hamilton around the outside but was now under massive pressure from the Mercedes driver. Hamilton was ready to pounce, but then Vettel spun in Turn 4, hitting the wall, and the Safety Car was released. It was terrible timing for the ex-champ, as Russell then pitted, overtaking his teammate and Perez to restart in third, followed by Alonso (who had not pitted).

Verstappen nearly got the better of Leclerc at the restart, but the top order remained unchanged, with Alonso under threat from Perez and Hamilton.

Within two laps, both got past the Alpine driver, and Kevin Magnussen (Haas) – with the McLarens of Norris and Ricciardo in tow – now harried the Spaniard.

Perez was on a roll, lining up Russell for a well-executed pass into Turn 11. Upfront, it was status quo, with Leclerc and Verstappen swapping fastest times.

Then Verstappen’s challenge came to a smoky halt when the engine of his RB18 caught on fire. The Dutchman was livid, afterwards saying this second retirement in three races was “unacceptable”. On the track, the VSC was deployed, and Leclerc cruised to victory. He also took home the fastest lap and the Driver of the Day award to score the first Ferrari grand slam since 2010.

Perez was a distant runner-up, followed by Russell and a desperately unlucky (and unhappy) Hamilton in fourth.

With Leclerc having as many points as Russell and teammate Sainz (second and third in the standings) together (with Verstappen only sixth), things looked rosy for the Scuderia as the circus travelled to Imola for the first Sprint race of the season and the Emilia Romagna Grand Prix.

Verstappen made his intentions clear by taking pole over Leclerc in the wet qualifying session, with Norris third.

Sensing a Ferrari victory, the tifosi were out in full force on Saturday, and the crowd erupted when Leclerc took the lead from the Dutch driver at the start. Perez was up to fourth within ten laps and, on the following lap, took third from Norris with the aid of DRS. A determined Sainz scythed through the field and got past Norris with only two laps remaining. Meanwhile, Verstappen inched closer to the championship leader.

He made his move on the penultimate lap – using DRS to slingshot past going into Tamburello – to score an important win, with Leclerc ruing untimely graining of the Ferrari’s tyres.

Sunday, under grey skies and intermittent rain, saw Verstappen line up first on the grid (with all cars on intermediate tyres), alongside Leclerc, with teammates Perez and Sainz in the second row. At lights out, both Ferraris struggled for grip on the wetter side of the track. Verstappen took the lead ahead of Perez, and Leclerc dropped to third ahead of Norris.

On the opening lap, exiting Tamburello, Ricciardo’s McLaren understeered into the hapless Sainz, spinning the Ferrari into the gravel – leading to the Spaniard’s second retirement and triggering the Safety Car.

Magnussen moved up to fifth in the ensuing chaos, followed by Russell, with the Aston Martin pair of Vettel and Lance Stroll also making up places. The Red Bulls were first and second at the restart, with Leclerc struggling to pass Norris. He managed it on Lap 8, but Perez was 3.0 seconds ahead by then.

Dry patches started to appear on the track, and despite the possibility of more rain, Ricciardo was first to take the gamble for medium-dry weather tyres from the back of the field. This triggered a stampede to the pits, starting with Perez, then Leclerc and Verstappen.

Leclerc was ahead of Perez coming out of the pits, but the Mexican had enough traction to squeeze past into the first chicane. Leclerc tried a couple more times, but there was no way past without DRS. By now, Verstappen was over 10 seconds ahead of his teammate and lapped a frustrated Hamilton.

Ferrari, deciding to go for the fastest lap on softs, brought Leclerc in on Lap 50, sparking another round of stops for the frontrunners. Again, Perez managed to stay ahead of the charging Ferrari. Then, a “too greedy” Leclerc overdid it in the Variante Alta and spun, touching the wall. He had to pit for a new front wing, dropping him to ninth, but he recovered to sixth with passes on Vettel and Tsunoda. Meanwhile, Verstappen cruised to an easy win, with Perez claiming a clean sweep for Red Bull on Ferrari’s home ground. Norris took the final podium position. And Hamilton? He could not make any progress for more than 35 laps, finishing 14th.

For the Scuderia, it was a race of missed opportunities, one that has reignited Verstappen and a rampant Red Bull’s championship challenge. Bring on, Miami!