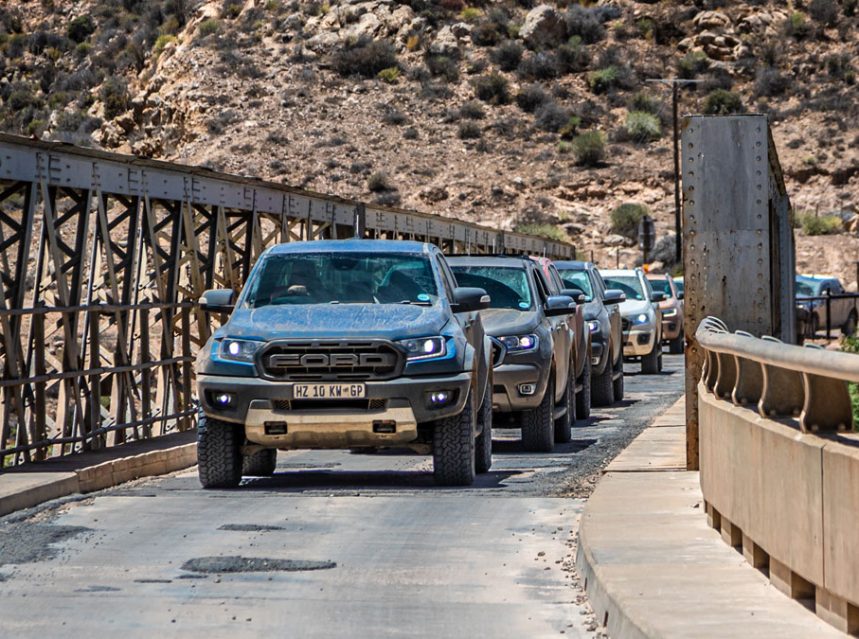 There are many ways to tackle the long road to the Mother City for the year-end holidays. You can take the smooth highways or the scenic byways or even venture on some of the rough-side roads. Or you can even decide to gravel travel all the way down to the coast…

This is exactly what the adventurous chaps at Ford decided to do on the eve of annual exodus down south: Take a couple of Rangers, fill ’em with media types, plan a nice gravel route from Tshwane to Table Mountain and there you go… just like in the good old days before tar roads and motorways.

Sounds easy enough (just follow the railway line to the colony, my friend) but in fact, it took weeks of preparation for Gideon Basson and his merry band to find a practicable and passable route… And so we hit the gravel close to Brits and from there traversed the Mooinooi and Boons mealie fields past the Buckingham grain silos to avert the bustle of Gauteng and Johannesburg.

Our cavalcade, consisting of two Raptors, two Wildtracks and two XLTs – all with 2.0-litre turbodiesel engines (157 kW bi-turbos for the Raptor and Wildtrack derivatives) – plus two normal 2.2-litre models as lead and sweep vehicles, made good time on the dust roads between Ottosdal and Hartbeesfontein and we reached Wolmaransstad in time for lunch.

RAIN IN THE FREE STATE

Some 400 km still remained for the day, and with thunderclouds starting to gather we pushed on, crossing the Vaal River near Bloemhof. The threatening heavens suddenly opened and in seconds the gritty roads were transformed into slippery, muddy lanes.

With high-range four-wheel-drive engaged on the seamless 10-speed ‘boxes, our Rangers easily and effortlessly dealt with the water splashes and mud but the bright colours of the shiny bakkies quickly disappeared under a thick brown coat.

The rain blanketed the Free State plains in grey as we traipsed through the small towns of Boshof, Petrusburg and Jagersfontein, and it was dark and cold (in December!) when the mud-coated pickups reached the overnight destination at Otterskloof.

Early the next morning, the convoy of gravel crawlers reached Phillippolis and Donkerpoort before crossing the rising Orange River. By now the clouds were dispersing and the mercury climbing and by the time we reached Colesberg, the dust was again hanging thick in the air.

On the road to Noupoort, we experienced big sky country at its best but the narrow servitude lanes amongst the Northern Cape sheep farms we had to go through numerous gates (Bertus Prinsloo, or medic, became a specialist gate closer) and negotiate many cattle grids.

The Raptor, with its bigger tyres, special suspension with Fox shocks and powerful diesel mill was in its element on the rough tracks and while the other derivatives bounced their way over the undulations, the flagship model sailed over it with ease, even at high speeds.

Late afternoon we were in Nieu-Bethesda in the Kamdeboo and after visiting the Owl House and local brewery, we settled at the Ganora guest farm for the night – having done 1,200 km on dirt so far.

With the morning sun following us, we took on the wide-open spaces of the Great Karoo the next day; over Richmond, Victoria West and Loxton to Fraserburg and Sutherland.

On this long, stretched-out dirt road under an indigo blue sky we suffered the first tyre blow-out, and after Sutherland – down the hairpin corners of the notorious Ouberg Pass – we lost two more; both due to the sharp shale prevalent on the roads dissecting the godforsaken Tankwa.

After overnighting under a star-spangled sky in the Tankwa tented camp, we negotiated the Cederberg along the Doring River up to Trawal, close to Clanwilliam, before traversing the sandy tracks of the West Coast through Redelinghuys and Hopefield to Darling.

From here it was just a stone’s throw to our final destination, and the dirty and dusty Ranger convoy soon turned into Meerendal Estate – after a journey of 2,030 km, with less than 5% (about 60 km) done on tar…

On this trip, through some of the most spectacular parts of our country, the Rangers behaved impeccably. They impressed with their dust-proof interiors, the eagerness of the 2.0-litre diesel engines in all circumstances, the smoothness of their transmissions and their efficiency, consuming just over 9 litres/100 km in tough conditions.

Was the gravel travel escapade worth it? Well, if you want to see the hidden gems along the less travelled roads of our stunning country, then yes, for sure.

Distance on tar:less than 70 km