This month, Driven set out to answer one question: If you’re set on buying the Mercedes-Benz A-Class – it is South Africa’s Car Of The Year after all – which consideration is more important: features or power? Or is it something else altogether?

Before you think that the Driven testing team has slipped down the proverbial rabbit hole, here’s a quick explanation of our motivation behind an unlike-for-like comparison between the Mercedes-Benz A-Class A200, and it’s more powerful (and more pricey) A250 sibling. Faced with the predicament of choosing between these two closely related cars, a dilemma we’re sure potential A-Class buyers everywhere are faced with, Bernie Hellberg Jr and Deon van der Walt decided to match them on a few points to see who comes out tops.

Deon’s tester, the A200, had more onboard tech than a Google situation room, while Bernie’s A250, contrary to what the superior name would suggest, didn’t necessarily even have superior functionality.

If we’re honest, the A200 AMG Line that Deon had on test was filled to the brim with technology and was even gifted in the looks department. But we’re sure, as a buyer, it will still be a tad difficult to justify this purchase.

For roughly the same kind of money, the Golf GTI or Renault Megane RS become serious options to consider. These cars are not exactly lacking on the feature front and can plaster an absurd smile on your face whenever you depress the go-faster pedal.

The 1.3-litre turbocharged mill is good for 120 kW and 250 Nm of torque that proved to be just about adequate at propelling the 1,335 kg bulk of the car forwards without much drama.

For starters, the luxurious interior, the beautifully finished piano black fascia with the aircraft turbine-inspired air vents, and the sheer number of interior lighting.

The A-Class is Merc’s pioneer model for the MBUX – the next generation personal assistant technology that isn’t even available on the big daddy G-Class, yet. While, for the casual observer, it might have seemed like I was talking to myself, I was, in fact, asking the Mercedes to change everything from the lighting, to the music and even switch between different heating and cooling options. 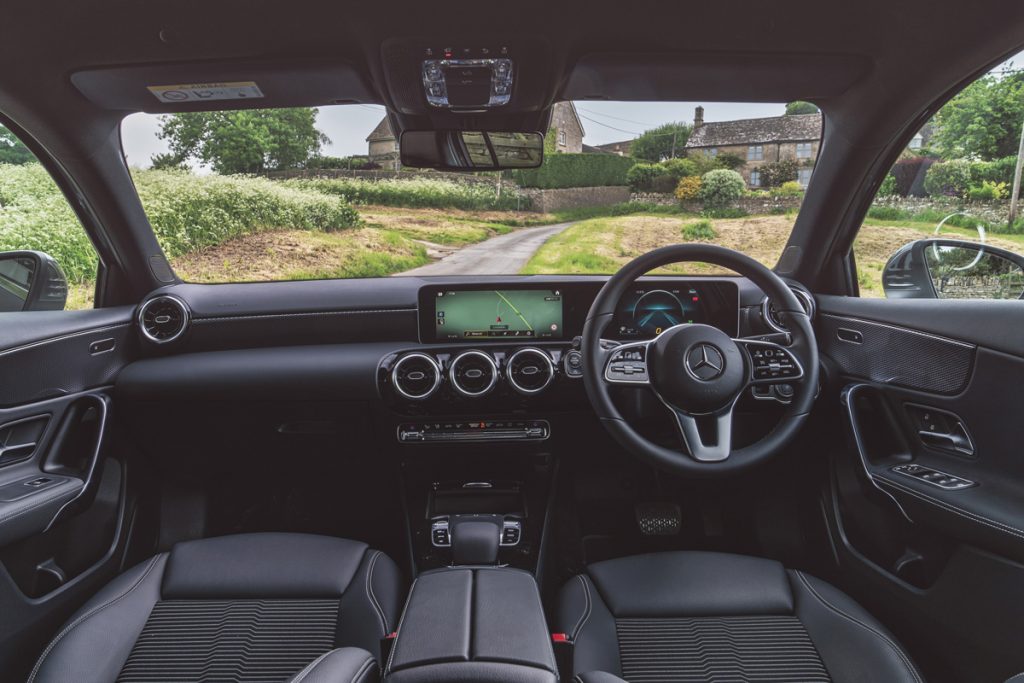 The new A-Class arrived in South Africa with an almighty bang. One of the most important Merc models was now sleeker than ever, more refined inside and as technologically advanced as any of its rivals. At least that’s what all the hype suggested.

If there’s one thing that I’ve learnt about hype, it’s that things (whether good or bad) sometimes get blown out of proportion. Thus, I approach a new car with as much objectivity as I can muster.

This is true of my first introduction to the new A-Class; the car impressed me with its relative agility, while the MBUX system blew me away. I was looking forward to a longer-term acquaintance with the A250.

Unlike the tiny 1.3-litre mill in the A200, the A250’s twin-scroll turbo system 2.0-litre four-cylinder engine, mated to a seven-speed dual clutch transmission generates a more segment-appropriate 165 kW and 350 Nm of torque. This configuration is the real star, virtually negating turbo lag altogether, underlining the car’s dynamic prowess.

In AMG Line spec, the A250 is fitted with striking 18” two-tone wheels, with 19-inchers offered as an option. The choice of wheels and 225/45 low-profile tyres, together with the clever suspension setup, smart stability and traction control systems means that the A250 has no problem sticking to the road. It also, unfortunately, means a stiffer ride that borders on harsh.

On the performance front, the A250 gets the thumbs up, and the noticeably more refined cabin raises the car’s profile slightly above its nearest market competitors. It falls conspicuously short in terms of standard specification, so be prepared to pay more for the MBUX system, and any fancy driver aids beyond the standard cruise control system.

It’s a good car, the A200 AMG Line. The tech is a cut above any cars in the segment, and the comfort levels, too, dabble in the upper spheres of lavishness. Would we consider it? We certainly would, although we would have liked some more rear legroom.

Ultimately, the A250 appears to have nailed the brief, targeting those who seek a comfortable, everyday hot hatch rather than a hard-core performance machine. If you don’t mind padding the A250 with optional tech, it offers a more rounded hot hatch experience than its sibling.