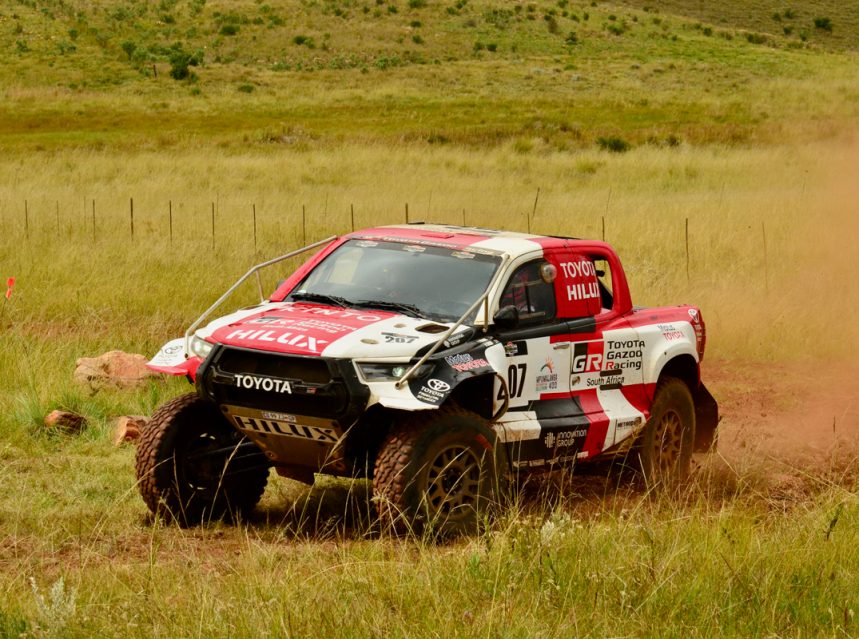 The generally bashful town of Dullstroom in Mpumalanga played host to a motley crew of motorsport fanatics at the opening round of the 2022 South African Rally-Raid Championships. While the town was a hive of activity in late March, it remains a traditionally quiet weekend breakaway gem.

There is hardly a more scenic Mpumalanga town than the sleepy hollow of Dullstroom, a mere two-and-a-half-hour drive from Johannesburg. With its assortment of quirky stores, restaurants and pubs, and a myriad of accommodation options, few spots on the Highlands Meander are as welcoming as Dullstroom.

Once a year, however, Dullstroom ditches its idyllic dreaminess for petrol fumes and roaring engines, as the first round of the annual off-road season – now dubbed the South African Rally-Raid Championships – rolls into town.

As ever, the Toyota Gazoo Racing team was well represented at the 2022 opening round and ultimately claimed the most significant scalps of the race in an assortment of categories. We accompanied the team over the event’s two days in the recently upgraded Hilux 2.8 GD-6 4×4 Legend auto.

UPGRADES FOR THE WIN

The Toyota Hilux remains South Africa’s most popular vehicle, often topping the light commercial vehicle sales charts and the overall one. Offered in four configurations – single, xtra, chassis, and double-cab – there is a Hilux to suit everyone’s needs.

Given subtle (and sometimes not-so-subtle) enhancements in the later part of the current model’s lifespan, the Hilux received a new ‘face’ in August 2020, an upgrade introduced alongside the new flagship Legend grade and the premium leisure Legend RS models, complete with electric roller-shutter deck lid.

The JBL premium nine-speaker audio system remains exclusive to 4×4 Legend models such as the one we used during our Mpumalanga excursion.

If visiting Dullstroom for the first time during a race weekend, it would be hard to imagine what the town is like on a typical weekend. To be sure, Dullstroom can hardly be described as ‘bustling’ on a good day, but the town has many curiosities waiting to be explored.

Being in trout country, almost every restaurant and deli proudly has this freshwater fish on its menu. Some establishments even have it in their names, such as the Duck & Trout old-style pub, where traditional favourites such as fish and chips are served. You could also be daring and try some trout sushi.

At Wild About Whiskey, you can sample some of the country’s largest selection of whiskies or enjoy something different with chocolate and whisky pairings.

Beer-lovers are also in luck. As with most small towns, there’s a local brewery with craft offerings. Anvil Brewery serves up a selection of craft beers – conveniently located next door to Beans about Coffee for those who’d prefer a caffeine fix. With several dining options, the locals point to Mrs Simpsons for a taste of localised fine dining – but be sure to make a timely reservation.

Befitting the town’s Old English roots, Walkersons Hotel and Spa should be at the top of your list if an authentic Highlands stay experience is what you are after. Doubling as a property estate, Walkersons oozes grandeur without being ostentatious and blends spectacular scenery with an immersive nature experience.

Walkersons’ cottage-style rooms are dotted around the property’s dams, boasting every creature comfort you’d expect from a five-star hotel – including an outdoor shower and cosy fireplace for those cold autumn evenings.

Combining the best of both worlds – driveability, comfort, and superior off-road capability – the legendary Hilux has evolved over more than six decades into a luxurious creature revered by many but matched by few. It is all good and well to spend time (as we often do) in the Hilux in an urban environment, yet only when chasing Toyota Gazoo Racing’s Dakar-winning Hilux DKR T1+ vehicles across the hills and valleys (and some abysmal gravel roads), does one again comprehend why the Hilux is South Africa’s favourite bakkie.