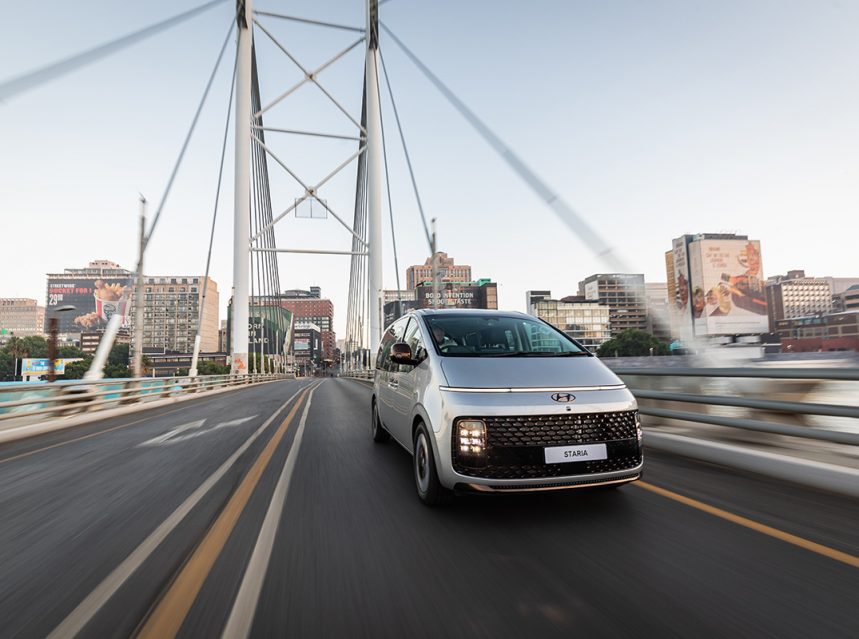 Shooting for the Stars |

Solid, dependable, practical, utilitarian are the usual adjectives used to describe an MPV-style minibus. These vehicles are designed to be first and foremost people carriers, where function usually trumps form. Now, however, Hyundai’s new Staria MPV has introduced a whole new list of minibus adjectives to the mix, including sleek, luxurious, comfortable and effortlessly stylish.

Unveiled in November 2021, the Staria is Hyundai’s replacement for its long-serving and popular H1, which has been available in bus, panel van and MultiCab guises for the past 11 years. “Replacement” is something of an understatement, though, because the Staria has elevated Hyundai’s MPV offering in every possible way. As a colleague of mine remarked recently, the H1 (with no disrespect to this very capable workhorse) felt like it was conceptualised as a panel van and then converted into a bus, whereas the Staria was very obviously designed from the start as a luxury bus, and then converted into a panel van.

As with the H1, the Staria will indeed be available in panel van and five-seater versions – both of which will be launched to the local market next year – but it’s undoubtedly the bus that is the star of the show.

As befits its name, the Staria impresses first with its out of this world styling – a sleek, futuristic design that also has a charming 80s vibe about it (and, dare I say, some similarities to the Toyota Previa). It is characterised by a single stroke running from front to rear, inspired by the curve of light that illuminates the Earth’s horizon at sunrise when viewed from space. This visual is further enhanced by the horizontal daytime running lights and a positioning lamp running across the vehicle’s face that, as with all Hyundai vehicles of late, comes complete with an eye-catching grille.

Eagle-eyed observers might also spot that some of the Staria’s grilles (on the Luxury model specifically) are decked out in an attractive brass colour – along with other elements, including the headlamp bezels, side mirrors and door handles – which adds a sophisticated touch to an already distinctive vehicle.

Currently, the Staria range is available in three variants – Executive (available in nine- and 11-seater options), the nine-seater Elite and the flagship nine-seater Luxury – each with its own trims and features. All three derivatives are powered by the same R2.2-litre VGT turbodiesel engine that delivers 130 kW of maximum power and oodles of torque (430 Nm) as needed for hauling all those passengers around.

All three variants also come with the same transmission – an eight-speed automatic, and easily one of the best available – that is operated by Hyundai’s “drive by wire” system, which replaces the gear lever with centrally mounted buttons. As with the new Santa Fe and Palisade, losing the gear lever frees up loads of space in the front, which can then be put to good use for storage options (just some of many you’ll find in this bus) – essential for any people mover.

Also essential in any MPV is loads of interior space, something that the clever designers and engineers at Hyundai have managed brilliantly by extending the H1’s original length, width and height, and designing all four rows of seats in such a way as to maximise space and passenger comfort. One such example, is excising a middle seat in the third row of the 11-seater Executive model to make it easier for passengers to access the fourth row of seats.

Panoramic windows add to the feeling of space, as does the dual sunroof that comes standard on the top-of-the-range nine-seater Luxury derivative. The latter also comes with ultra-comfy pilot seats in all but the fourth row, with second-row seats boasting a swivel function to allow second and third-row passengers to face each other – perfect for that corporate brainstorming session on the go.

Passenger functionality and comfort are prioritised in the Staria with USB charging ports in three out of four of the seating rows, a wireless charging pad in the front, heated and ventilated front and second-row seats in the Luxury derivative (front row in the Elite), rear window curtains in the Elite and Luxury, and rear air vents and controls. The infotainment system can be used with Bluetooth, Android Auto, or Apple CarPlay and simultaneously accommodate several Bluetooth connections.

For peace of mind, all seats now have three-point seat belts (replacing the lap seat belts in the H1) with six airbags dotted around the bus, and the Elite and Luxury versions have Safe Exit Assist, which prevents a passenger from opening the power sliding door if a rear-side vehicle is passing by.

The safety features continue upfront with Rear Cross Traffic Alert, Forward Collision Avoidance Assist and Blind-Spot Collision-Avoidance Assist in the top derivatives, but perhaps my favourite feature – from a safety and aesthetics perspective – is the blind spot view monitor in the Luxury derivative. If you put your indicator on, a video pops up of the vehicle’s blind spot on your instrument cluster, replacing either the rev counter (right turn) or speedometer (left turn).

As we’ve come to expect from Hyundai, the Staria comes highly specced – so much so that a single article can hardly do it justice. This also makes the asking price that much more competitive when compared to its rivals in the MPV segment, such as the Mercedes-Benz Vito, which is cheaper yet lower specced.

Along with high specs come high expectations, and the Staria delivers on its promises – to the moon and back. It’s thoughtfully and solidly built (what else would you expect from the only auto manufacturer in the world that makes its own steel) and beautifully styled. It’s also designed to make you smile – whether you’re driving it, being driven in it, or watching it pass by – and that’s certainly worth a gold star in our book.