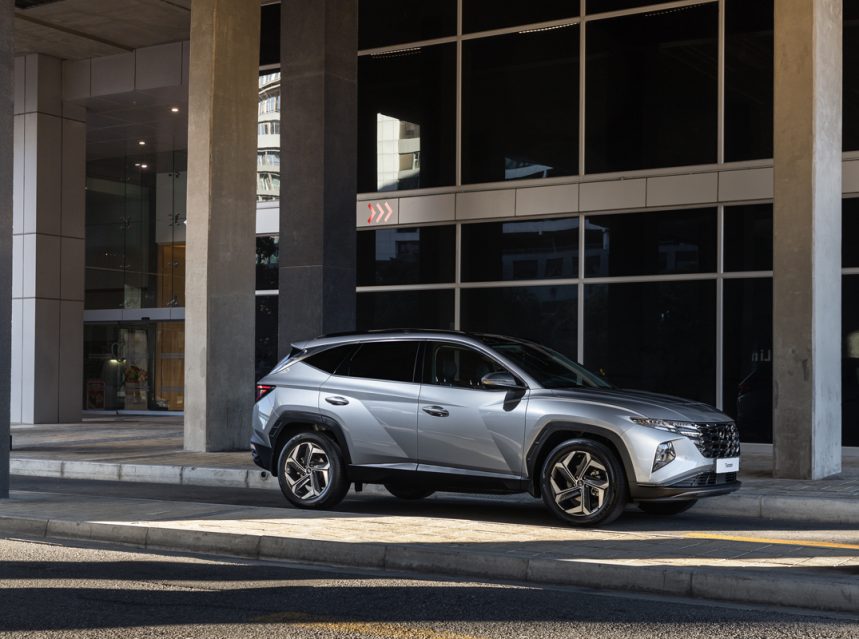 Hyundai credits the original Tucson as representing a turning point for Hyundai in South Africa when it was introduced in 2004, making consumers sit up and take notice of the Korean manufacturer, and then following suit with impressive sales figures ever since. The all-new fourth-generation Tucson SUV continues to improve on its forebears’ remarkable lineage and looks set to make buyers sit up and take notice all over again. It, therefore, seemed fitting that we found ourselves idling next to a first-generation Hyundai Tucson as we waited for the lights to change during the recent launch of the new-generation SUV.

It is an established trend in motor manufacturing that engines get progressively smaller (though more powerful), and vehicle dimensions get larger – larger by millimetres, mind you, but millimetres that usually translate into more interior space nonetheless. The same is true of the new Hyundai Tucson, which is now 150 mm longer and 85 mm wider than the previous generation – a win for rear passengers with long legs – with even more boot space.

But its larger dimensions are unlikely to be the first thing you notice about the new Tucson, for this sensuous and sporty new SUV is draped head to toe in dazzling jewels – parametric jewels.

It certainly is a fun phrase to say (or write), but if you’re a little confused by its meaning, you’re not alone. Parametric jewels refer to the prominent geometric patterns visible throughout the Tucson’s design. The most obvious of these are in the Tucson’s front grille. With the hidden parametric lights turned off, the Tucson’s face is covered in sleek dark patterns, but with daytime running lights turned on, the grille’s edges are transformed into eye-catching jewel-like shapes. The overall effect reminds me of a pilot’s winged badge (which is apt considering how the Tucson flies over any surface – but more about that later).

The lighting design on the Tucson’s rear also contains parametric details. However, I find the result less successful, as the two separated triangular taillights are too reminiscent of Peugeot’s three claw lighting design – just minus a claw. I do, however, like the Hyundai logo’s placement on the rear windscreen, as opposed to the tailgate and the nifty secret rear wiper blade, which is hidden under the spoiler.

Perhaps my favourite use of the parametric jewels is in the three attractive alloy wheel designs and the sharp sculptural lines on the Tucson’s flanks. They give it a chiselled appearance and the impression that it’s just waiting to spring into action.

Compared to the exterior, the interior of the new Tucson is less angular and more comfortably rounded to make the cabin a relaxing place to be. Silver accent lines running across the dash and along the door windowsills add some bling. So do the silver accents on the multi-function steering wheel and around the new console (which is noticeably higher than its predecessor’s, making the gear lever more comfortable to use), and the different coloured displays to match the car’s various driving modes. The touchscreen infotainment system has been moved from its more prominent position atop the dash in the third generation Tucson to slide in flush with the rest of the dashboard for a cleaner and more sophisticated appearance. As is to be expected these days, the Tucson comes with all the requisite connectivity mod cons, auxiliary ports, and a cell phone charging pad.

One thing that is a new “nice to have” that I have yet to experience is the Multi-Air mode functionality, which diffuses the air throughout the cabin using direct and indirect jets. This cools the car at the same rate as a regular air-con system, but without blasting cold air aggressively onto your feet or hands. Rear passengers are also kept cool thanks to three-zone climate control, and if you opt for the top of the range Elite derivatives, front passengers can enjoy heated and ventilated front seats (or just heated for the entry-level Premium and Executive options).

There are two four-cylinder engine options in the range. The Smartstream G 2.0 MPI petrol engine is available in all three derivatives – Premium, Executive and Elite – and is paired with a six-speed automatic transmission. It pumps out 115 kW of peak power and 192 Nm of peak torque with combined fuel consumption figures of 8.9 l/100 km.

The Smartstream D 2.0 turbocharged diesel engine is only available in the top of the range Elite. It is mated to an eight-speed auto transmission, with 137 kW of power, 416 Nm of torque and miserly combined fuel consumption figures of 7.9 l/100 km.

As we have come to expect from Hyundai SUVs (like big brothers Santa Fe and Palisade), the Tucson is both engaging and comfortable to drive. Its four driving modes – Eco, Smart, Normal and Sport – offer noticeable changes in driver feedback and feel, with the Sport mode being the most fun (though least economical) but also the most precise under challenging driving conditions.

A notable array of active and passive safety systems – including Blind-spot Collision Warning, Forward Collision Assist and Rear Cross-traffic Collision Assist (depending on the model) aid driver confidence. Some emit audible warnings that can become distracting – though I am sure we would have found a way to turn these off had we had more time to fiddle with the car’s settings. Another potential distraction is the noise of wind intrusion when driving at higher speeds – but the Tucson’s excellent sound system soon puts paid to that.

It is becoming more of a struggle to critique Hyundai’s offering these days, with each successive generation making huge strides forward from the previous ones. The same is true of the Tucson, which offers a compelling combination of comfort, convenience, and good looks at a competitive price (R519,900 for the Premium AT to R699,900 for the Elite Turbodiesel AT) – particularly when considering its comprehensive standard spec sheet (compared to much less so for its competitors) and Hyundai’s excellent warranty and service plans.

Yes, the Tucson is a riot of parametric jewels, but it also looks set to be yet another jewel in the crown of Hyundai’s SUV line-up.