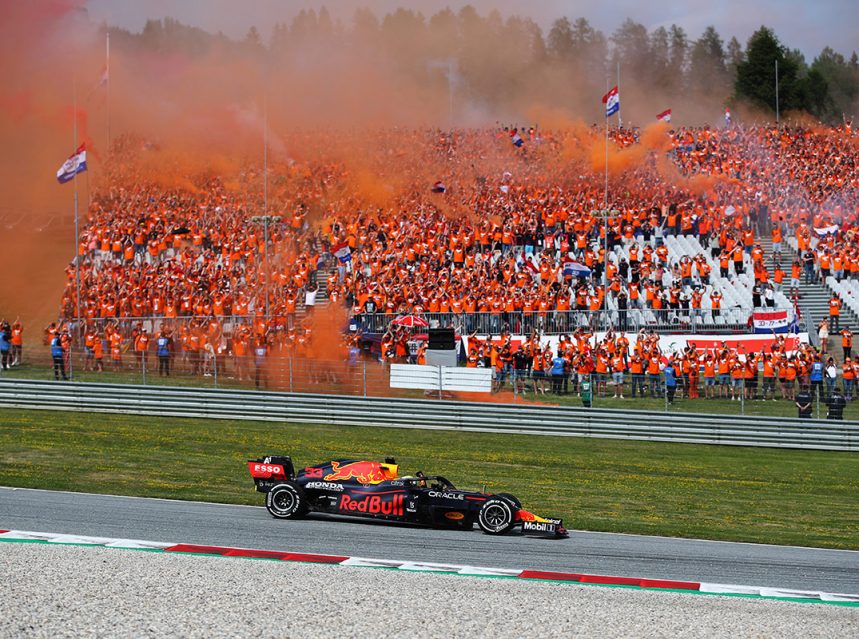 In a regular Formula 1 season, the month of July has always been the typical quiet-before-the-storm kind of month. This, however, is no regular season, and July proved to be the storm, promising a hurricane for the remainder of the season.

July started in much the same way that June ended – with Max Verstappen claiming a second consecutive victory at the Austrian Grand Prix, followed by the unveiling of the 2022 car in the leadup to the British Grand Prix at Silverstone, the first-ever F1 Sprint race, and Lewis Hamilton’s controversial victory in the British Grand Prix.

Let’s track the storm from its onset…

Max Masters The Ring with a Hat-Trick of Wins

One week after winning the Styrian Grand Prix at the Red Bull Ring, Max Verstappen returned to the same track for the Austrian Grand Prix with another dominant display as he claimed his third victory in three weeks to secure the first grand slam of his career. Starting in pole position, the Red Bull driver led every one of the 71 laps to crown his points haul with the extra point on offer for fastest lap.

The Flying Dutchman was faultless throughout the race, finishing the race almost 18 seconds ahead of Mercedes’ Valtteri Bottas and McLaren’s Lando Norris. Nursing a damaged car, Lewis Hamilton finished fourth.

Our driver of the day was Lando Norris, who again showed sublime skill graduating his McLaren from the midfield to create a stir with front runners, Red Bull and Mercedes.

The Austrian Grand Prix marked Verstappen’s fifth win of the season, his 15th career win and the Red Bull team’s 70th victory in Formula 1. Heading to Silverstone for the next round, Verstappen led the Drivers’ Championship with 182 points, 32 points ahead of Hamilton, and Red Bull led the Constructors’ Championship with 286 points, 44 clear of Mercedes.

Spanning a distance of 100 km and lasting around 25-30 minutes, the F1 Sprint race is designed to provide a short and fast-paced race without the need to pit. Points are awarded to the top three finishers, three for the winner, cascading down to one point for third, with the finishing order of the race determining the grid for the Sunday showpiece – the Grand Prix. Qualifying for the F1 Sprint maintains the same format as before, but moves to the late afternoon on the Friday of a race weekend.

Max Verstappen made history by winning Formula 1’s first F1 Sprint at Silverstone, thanks to a brilliant start that allowed him to power past title rival Lewis Hamilton and take a lead that he held all the way to the checkered flag, to claim the eighth pole position of his career in a notable and thrilling manner. Lewis Hamilton ended second 1.4 seconds behind Verstappen, ahead of Valtteri Bottas, in the other Mercedes. Lando Norris once again excelled in securing a fourth place on the grid in his McLaren.

Max Verstappen’s hopes of securing a sixth victory of the season at Silverstone were over within moments of the start of the British Grand Prix, when a questionable move by Lewis Hamilton sent Verstappen’s Red Bull into the barriers at nearly 300 km/h.

Starting from pole position, Verstappen’s start was average at best, but he managed to take the lead heading into the first corner. With a blistering start from second place on the grid, Hamilton was on the attack from the very first corner, but Max continued to hold the lead, even after going side-by-side with Hamilton into Woodcote. The Mercedes driver then went for another overtake on the fast straight leading into the high-speed Copse, but Max claimed the racing line, forcing Hamilton to take the no-go inside line. Leaving enough room for Hamilton, who by now was behind Verstappen, the left-front wheel of Hamilton’s Mercedes ripped off the right-rear wheel of the Flying Dutchman’s Red Bull, sending him careening into the tyre wall, ending Verstappen’s near-certain chance of race victory even before he had completed a lap.

Max emerged from the wreck looking dazed and confused after a 51G impact, and following an assessment by the trackside doctors at Silverstone Circuit Medical Centre, he was airlifted to hospital for further observation before being discharged the next day.

The accident brought out the red flags, and Hamilton was handed a slap-on-the-wrist 10-second time penalty for causing the collision at his home Grand Prix.

After serving his 10-second time penalty during his only pit stop, Hamilton went on to take the lead after two easy passing manoeuvres on the penultimate lap. First, he passed his teammate Valtteri Bottas, who had to follow team orders to let Hamilton through, and then Charles LeClerc in his ailing Ferrari. LeClerc drove an outstanding race, keeping Hamilton behind him after the restart, despite an engine problem on his Ferrari that developed shortly after the restart. As the race progressed, so did the engine problem on LeClerc’s Ferrari, eventually handing Hamilton the rather hollow victory. Had it not been for Ferrari’s engine problems, LeClerc should easily have won the race. Still, Formula 1 and heartbreak go hand-in-hand, and LeClerc had to settle for second place, comfortably ahead of Bottas in the other Mercedes. Behind Bottas, Lando Norris took the fourth position following another impressive drive in a McLaren that is notably inferior to the Mercedes and Red Bull cars.

“This is an incredibly difficult way to end the British Grand Prix weekend, and it goes without saying that we are all just thankful Max was able to walk away from the car, despite later being taken to hospital, where he remained overnight for observation. I have reviewed the footage many times and still cannot help but feel that putting a wheel up the inside at Copse, one of the fastest corners in this World Championship, was ill-judged and a huge risk by Lewis to both drivers. He was not significantly alongside Max, as you can see from the point of contact, Lewis’ front left to Max’s right rear. The move was never on and resulted in a 51G impact for Max.

We come away with a slim lead in both Championships, and you can be sure that once we have had time to reflect on today, all this weekend will do is add fire to our Championship fight,” commented Christian Horner, Team Principal of Red Bull Racing.

One driver taking out another is nothing new in racing, and Hamilton is not the first World Champion to take out a rival in a championship defining race – and he certainly won’t be the last. Senna, Prost and Schumacher come to mind as some of the former World Champions who successfully took out their main rival in a race, often in the last race of the season.

The difference with what transpired at Silverstone is that this is arguably the first time that a driver of the stature of Hamilton took out his main championship rival in one of the fastest corners on the Formula 1 circuit, leading to a crash that could have severely injured or killed Verstappen, and certainly would have killed him in the era of Senna and Prost. Clearly, Hamilton is under pressure from the young Dutchman, but given Hamilton’s vast experience and skill, he, of all drivers, should know the risk of injury or death with passing manoeuvres like these.

To add insult to injury, Hamilton refused to take responsibility for his part in the accident and showed a total lack of empathy for Verstappen, preferring to celebrate his rather hollow victory in front of his one-eyed fans as if nothing had happened, while Verstappen was in hospital. This behaviour stands in stark contrast to that of Michael Schumacher, who refused to celebrate a race victory after a serious accident in a race, even without him having contributed to the accident.

Max Verstappen’s response on Twitter mirrors the emotions of millions of Formula 1 fans who took to social media to express their anger and frustration: “Glad I’m ok. Very disappointed with being taken out like this. The penalty given does not help us and doesn’t do justice to the dangerous move Lewis made on track. Watching the celebrations while still in hospital is disrespectful and unsportsmanlike behaviour, but we move on.”

Hamilton’s on-track behaviour, his post-race celebrations, and his clear lack of respect and empathy for his fellow Formula 1 competitor, fall short of what is expected from a 7-time World Champion. Racing enthusiasts who indirectly pay the salaries of Formula 1 millionaires like Hamilton deserve a clean fight from start to finish, and young impressionable fans certainly deserve a role model who shows respect and empathy towards other competitors.

If anything, this should serve as a lesson for all drivers and fans on how not to behave. True sportsmanship demands a measure of humility and healthy respect for fellow competitors.