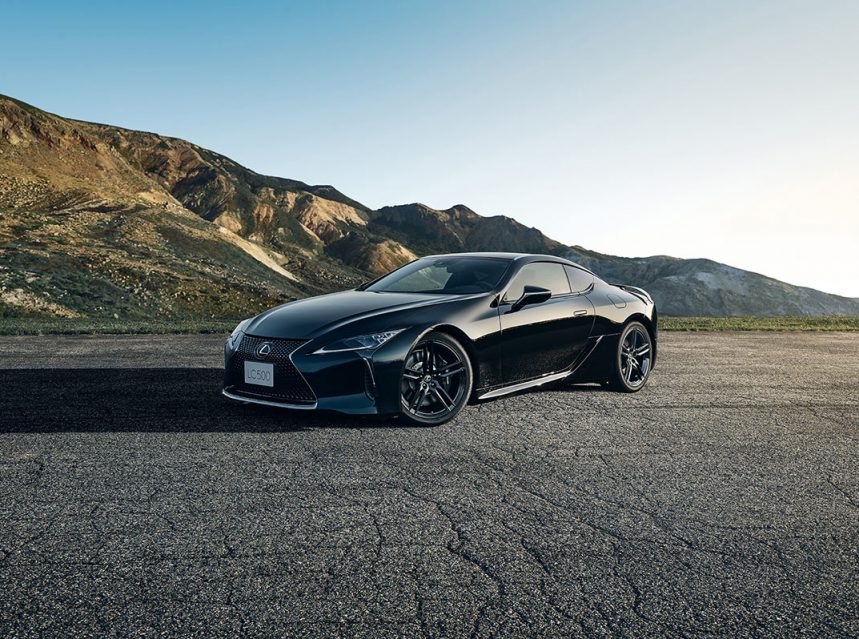 The Lexus LC 500 needs no formal introduction. It greets all encounters with a growl from its powerful 471-horsepower (346 kW) naturally aspirated V8 engine. Its artfully chiselled lines and refined curvature marry luxury and performance in a way that only Lexus can. The new 2021 LC 500 Inspiration Series takes the grand-touring coupé to the next level with an aviation-inspired design that will land in dealerships later this winter.

The new LC 500 Inspiration Series, the fifth on the LC platform, takes its cue from a partnership between air race pilot Yoshihide Muroya and Lexus engineers. The Lexus team created efficiencies for Muroya’s aircraft for everything from the control column’s grip design to maximising its aerodynamics using testing data learned on Lexus automobiles. The partnership ultimately assisted Muroya on his path to winning the 2017 Red Bull Air Race World Championships.

Aided by some of the same engineers who built the Lexus LFA supercar, Lexus took a unique approach to Muroya’s aeroplane’s aerodynamics by turning a preconceived concept on its head – literally. They found that taking an aeroplane wing and flipping it upside down created vortices that improved manoeuvrability and efficiency at the wingtips. After the team proved their theory on Muroya’s aircraft through testing and competition success, the Lexus team then aimed to employ that knowledge onto the LC by creating an automotive wing prototype built from aluminium. The team knew the final version, which would span nearly six feet in width, would need to be light, durable and warp-resistant. Carbon-fibre, the same material employed on Muroya’s aircraft, seemed like the appropriate material. Yet creating a carbon-fibre wing that large, much of which would have to be done by hand, would be a great challenge – but it’s one the engineers took head-on.

Standing apart from the standard LC 500, a superb vehicle in its own right, the 2021 Inspiration Series boasts a combination of features not found on any other LC package. The limited-edition vehicle is offered in one exterior colour, the superbly dark Obsidian, paired with bold and beautiful 21” black forged-alloy wheels that fill out the wheel wells. An eye-catching carbon-fibre reinforced plastic (CFRP) roof is standard, and it proves to be the perfect complement to the carbon-fibre rear wing spoiler.

Stepping inside, the serialised badge on the centre console immediately identifies the vehicle’s limited nature and its sequence in the 100 produced. The cabin is adorned with black Alcantara-trimmed sport seats that feature elegant Saddle Tan accents and seat belts. The steering wheel and shift lever are also accented in black Alcantara trim. A carbon-fibre scuff plate accents the door, and once inside, driver and passengers can bask in the sound of the standard Mark Levinson 13-speaker 915-watt Reference Surround Sound Audio system.

The LC 500 Inspiration Series benefits from the same updates to the standard LC 500 for 2021. Lexus engineers were able to trim 10 kg of unsprung weight from the vehicle, which is highlighted by the use of aluminium lower suspension arms, lighter suspension stabilisers with a hollow design and revised diameter, new high-strength coil spring material, and lighter 21” rear wheels.

With unsprung weight reduced, the LC’s suspension was refined to provide a smoother, softer stroke for an enhanced connection to the road. This was accomplished with adjustments to the front suspension’s electronic absorber controls to increase the length of the stroke. Engineers then optimised the bound stopper rigidity to help create a smoother overall suspension stroke. Rear stabiliser rigidity was enhanced to aid front turn-in ability to provide more linear steering input.

Upon start-up, thundering through the variable Active Exhaust, the 5.0-litre naturally aspirated V8 issues a full-throated engine note as a call to driving enthusiasts. The LC 500 has an output of 346 kW and 540 Nm of peak torque and can deliver a zero to 100 km/h sprint time of 4.4 seconds.

Other key enhancements for the 2021 model were made to the ten-speed automatic Direct-Shift transmission on the V8-powered LC 500, as the shift logic was updated to help provide improvement for daily driving in what engineers refer to as the “active zone” – the area where most drivers find themselves in the 50-70% throttle range. The Direct-Shift transmission allows engine RPM to expand in this range to accentuate the feeling of acceleration before shifting into the next gear.

LEXUS ENFORM FOR SAFETY AND CONVENIENCE

Lexus Enform Safety Connect comes with a three-year trial with access to Lexus Enform response centres 24/7/365. With Lexus Enform Service Connect, complimentary for the first ten years, the vehicle can send alerts for specific factory recommended maintenance, simultaneously alerting a preferred Lexus dealer. The Lexus App can be used to set push-reminders and alerts for maintenance and service issues. The Lexus Enform Remote (three-year trial subscription included) mobile app lets you lock and unlock doors, start the engine and climate controls, check the fuel level, and more – all through your smartphone or smartwatch.

Intuitive Parking Assist comes standard on the LC Inspiration Series. It uses sonar sensors in the front and rear bumpers to detect obstacles in the vehicle’s path during low-speed manoeuvring. The system gives an audible alert, and the Multi-Information Display (MID) shows the position and distance to the obstacle.