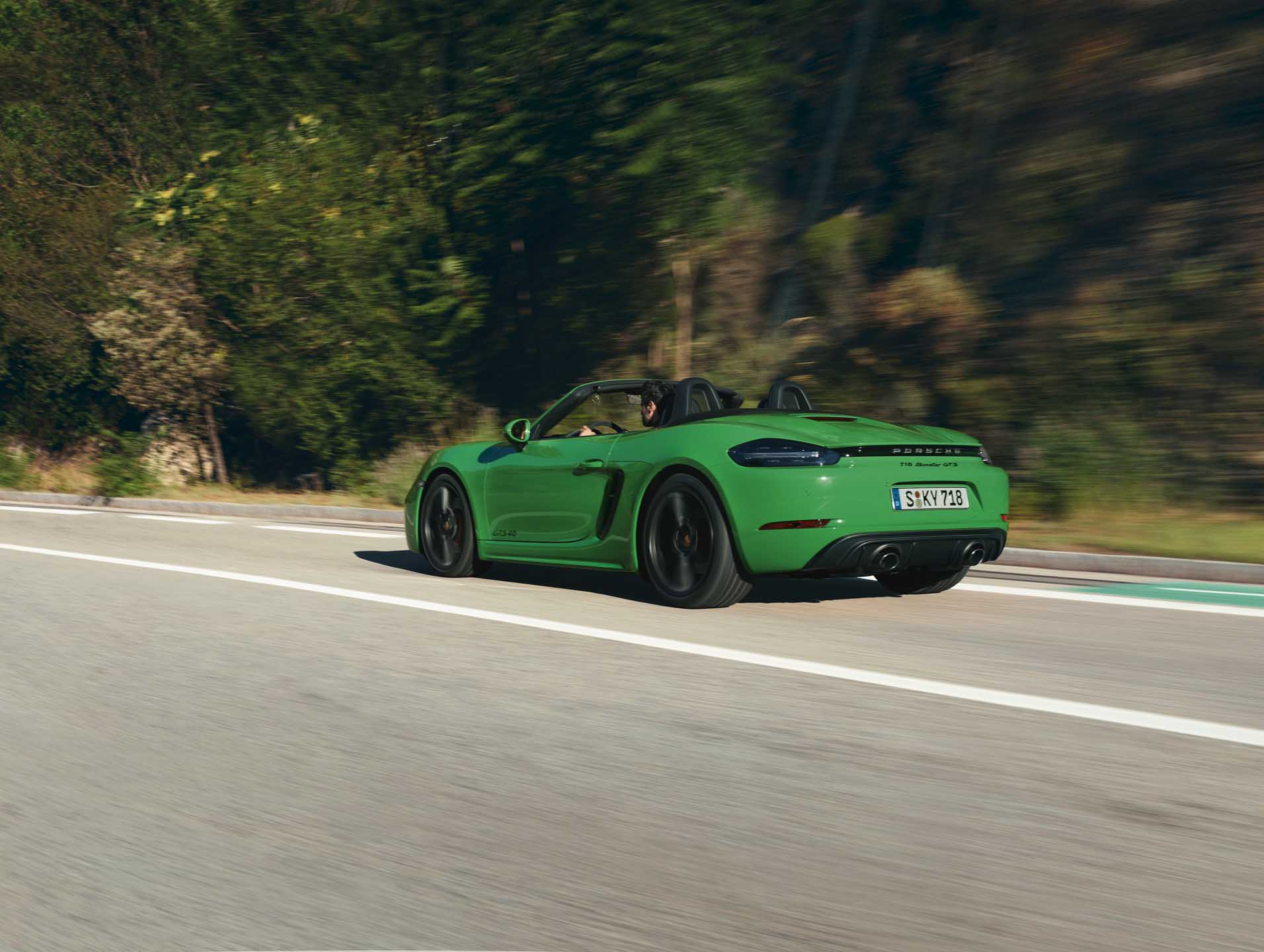 What defines happiness? It’s a deeply philosophical question that is as relative to each individual as it is contextual. For some, like me, it’s a sum of experiences. Like being at the Autódromo do Estoril for the launch of Porsche’s 718 GTS twins.

Getting back to the contextual bit, this very track played host to many legendary motorsport moments. There’s Niki Lauda’s third World Championship-winning race in 1984 and Ayrton Senna’s maiden win back in 1985. In 1996, Jacques Villeneuve famously overtook Michael Schumacher around the outside of the last corner – a daring move that put the Canadian on top of the podium.

Those were the days of unapologetic racing where nerve and pure talent – not R&D budgets – accounted for race wins.

A CAR OF THE SAME SUBSTANCE 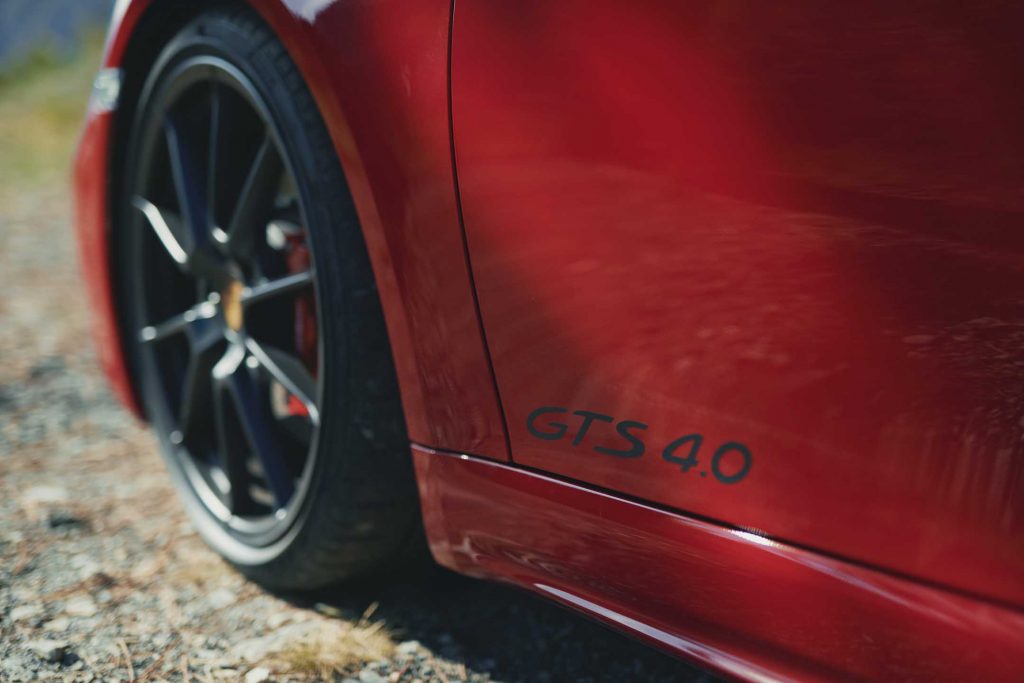 Speaking of unapologetic, I was there to drive the latest from Porsche that couldn’t be bothered to mince its words. A trio of GTS models in the form of the Porsche Cayman and Boxster 718 GTS 4.0 siblings, as well as the Macan bearing the same designation which we’ll cover in-depth in the April edition of Driven.

While elements of the GTS story dates back to 1953 with the Porsche 550 Spyder racing car and the 1962 718 GTR, the first car to carry the GTS appointment was the mid-engined 904 Carrera GTS that came about in 1963 and was designed by Ferdinand Alexander Porsche, who also happened to pen the 911. Interestingly, though, he was quoted as saying that the 904 Carrera GTS was his favourite work for Porsche since it was the closest resemblance to his original concept.

Bolted behind the driver was a 3.4-litre naturally aspirated 6-cylinder boxer engine that, at the time, was the most powerful engine ever fitted to the duo and produced 243 kW in the Boxster, while the Cayman had a slight edge at 250 kW.

According to the company’s data published with the launch of this duo, this resulted in a zero to 100 km/h sprint time of 4.7 and 4.6 seconds respectively as measured with the optional dual-clutch PDK gearbox. The top reaches of the velocity spectrum, on the other hand, as measured with the manual gearbox, was similarly impressive with the Boxster capable of 280 km/h, while its Coupe counterpart was rated at 285 km/h.

Then, in 2017, the successors were launched, and naturally aspirated engines looked to be inscribed as a footnote in the history of Porsche. With the smaller 2.5-litre 4-cylinder engine the GTS models produced 269 kW and 430 Nm of torque that enabled both derivatives to accelerate to 100 km/h in 4.6 seconds with the 6-speed manual, while the PDK shaved half a second off that already blistering time. Both were good for a terminal velocity of 290 km/h.

A glance-over footnote, though, the naturally aspirated engine was not. And true to the roots of the 904 Carrera, the Boxster and Cayman GTS models are back with a first-in-the-range 4.0-litre boxer 6-cylinder engine that kicks forced induction to the kerb, coupled to a 6-speed manual gearbox.

In my mind, the circle has now completed itself with all the elements that made the original GTS such a resolute icon present and accounted for – until the PDK arrives later this year, that is. 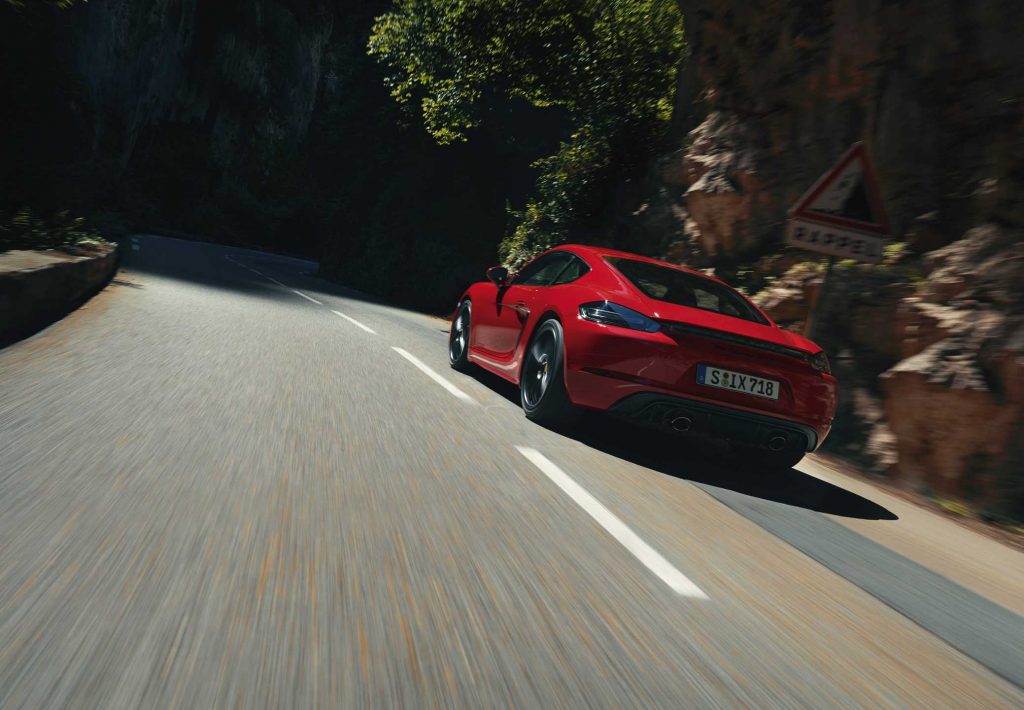 How does this all translate to the driving, though?

After quickly orienting myself in the left-hand driving seat of the Cayman GTS, I turned the key and the 4.0-litre engine burbled into life. Straightaway, I grasped the allure of this kettle of vehicle since this would be my first time driving a car with the atmospheric disposition from Porsche.

We pulled out of the pit lane following the lead of the 911 pace car for a sighting lap and it dawned on me that the ‘on-paper’ figures didn’t prepare me for the instantaneous power delivery courtesy of this motor. No waiting for turbos to spool up, just glorious linear acceleration to the red line.

As far as the torque delivery is concerned, it’s also quite forgiving across the spectrum with a good quantity of Newtons available even when you’re not in the optimal gear.

The time will come to shave off some of that velocity and when it does, the brakes work well with the electronic stopping aids to decelerate the car in a straight and controllable line – even after several punishing laps around the track.

Gear down as you approach the corner, and the throttle blipping feature helps to ensure stability into the corner by matching the engine revs with the gear’s rotation speed.

But that’s just priming for the corners, the true measure of any high-performance car’s driving appeal lays in how well it handles the actual corners. And in this instance, very well, I’ll say! A large sum of the Cayman’s handling can be attributed to the standard Porsche Active Suspension Management (PASM) system that lowers the body, and as a result the centre of gravity, by 20 mm.

The 20 mm setup, as we found, is considerably edgier in its execution than that of the optionally available 10 mm PASM set-up that is more geared towards comfort. While both models persistently cling to the blacktop, it also encourages you to attack the curbs with even more vigour. Naturally, I obliged.

Getting confused for an instant with my down-gearing into a corner (remember I’m used to right-hand drive), I ended up unleashing all the available torques mid-corner. The result was a dramatic looking (I’m sure) oversteer that happened to be perfectly controllable thanks to the well-sorted chassis and the Porsche Stability Management that promptly corrected me. 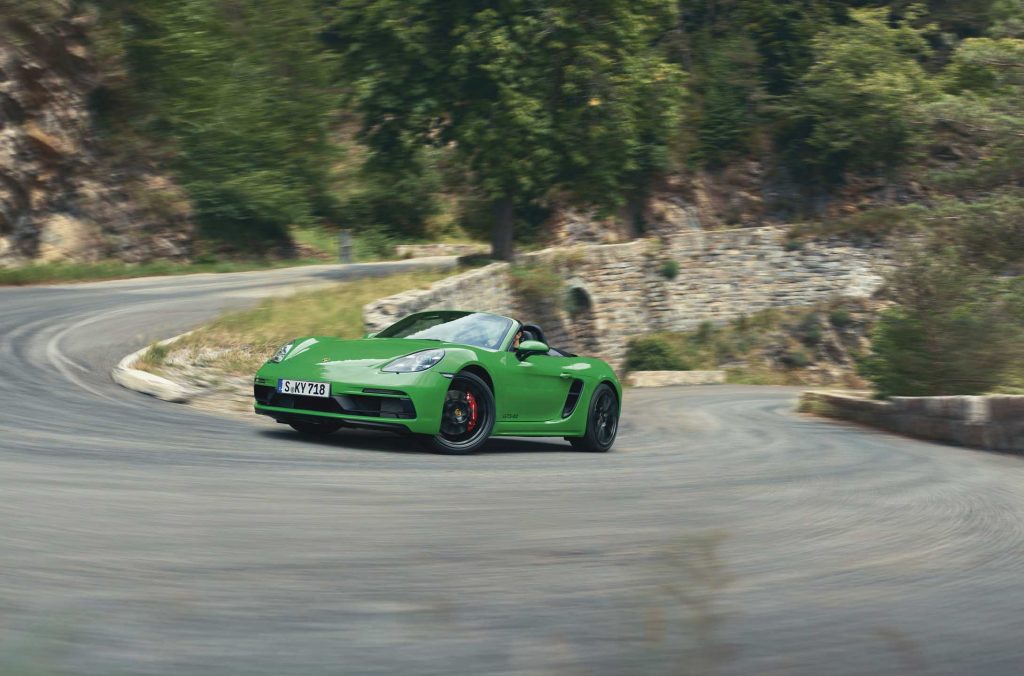 As for driving the Boxster, the same fundamentals as found in the Cayman are present with very little separating the duo as far as perceptible performance is concerned. With the roof lowered, we explored some of the more picturesque mountain passes and seascapes that Portugal has on offer with the auditory bliss that is the 4.0-litre engine filling the open cabin.

Even with the roof down, though, we managed to maintain an effortless conversation with only non-intrusive wind noise making its presence felt. Add to that the open air of the mountain passes and the reverberating sound from the engine bouncing off the hillsides, and I might very well dare call this the closest you can come to spiritual enlightenment for the price. You get a true sense that the Boxster was made with this in mind. 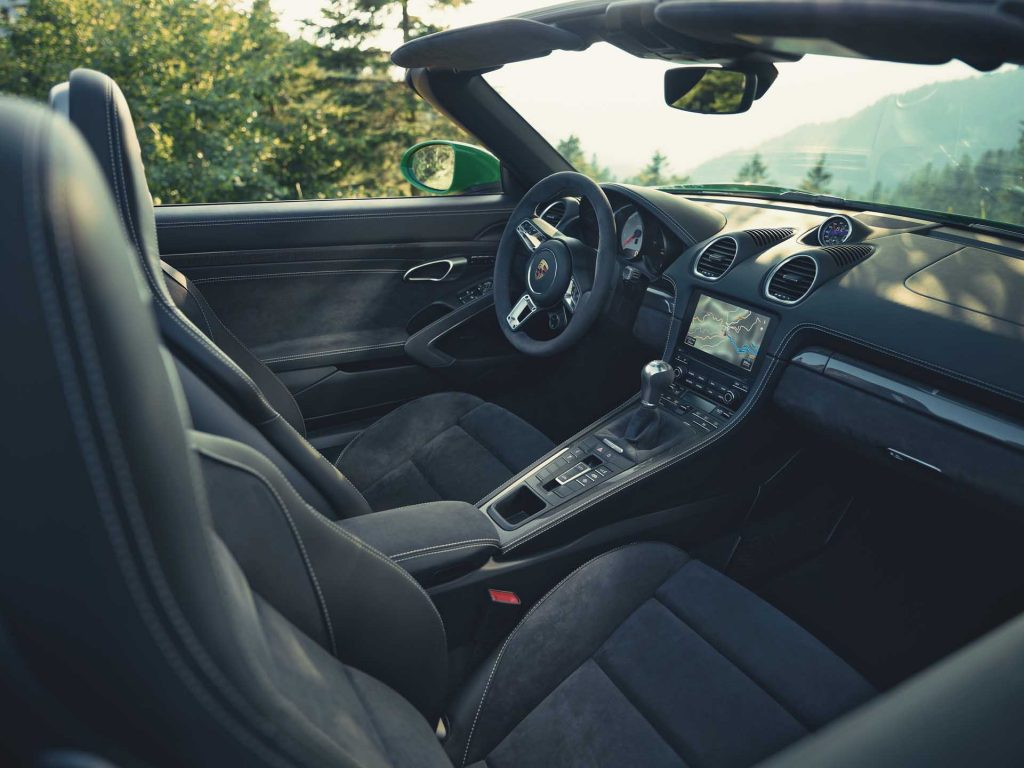 So, we’ve established that both the Boxster and Cayman GTS 4.0 models perform as they should, but do they look the part? Very much so. While both models still retain the essential hallmark styling elements of their respective nameplates, the GTS-specific styling clearly sets them apart from the rest of the range.

The most prominent stylistic touches are the black accents that can be found on the sides, front-end and the rear where both a black spoiler and rear diffuser lives. Furthermore, there are also some carbon fibre bits that garnish the vocal points, while Alcantara adds a dose of sport-meets-elegance on some of the main surfaces. If I must raise one concern with this stylistic approach, though, it is with the Alcantara, especially on the steering wheel, that might not age all that well coupled with continuous use.

What defines happiness? For me, it’s getting to drive a car that carries such an iconic legacy on its shoulders, around a racing circuit that has defined many of the greats in the art of motorsport. Add to that the fact that these are two of the most involving cars I’ve driven to date, and I can confidently say that this might just be the epitome of that mythical sense of Nirvana that everybody so eagerly seeks.

Sure, it’s not the perfect set of specimens. For one, the built-in GPS was more difficult to crack than a trigonometry problem. And in that same breath I reckon for something that, on a driving level, felt so unadulterated, I would have appreciated less of a digital-overload in terms of features and functionality – it slightly contradicts the essence of GTS in my opinion. But hey, this is 2020 and there’s the matter of personal preferences… 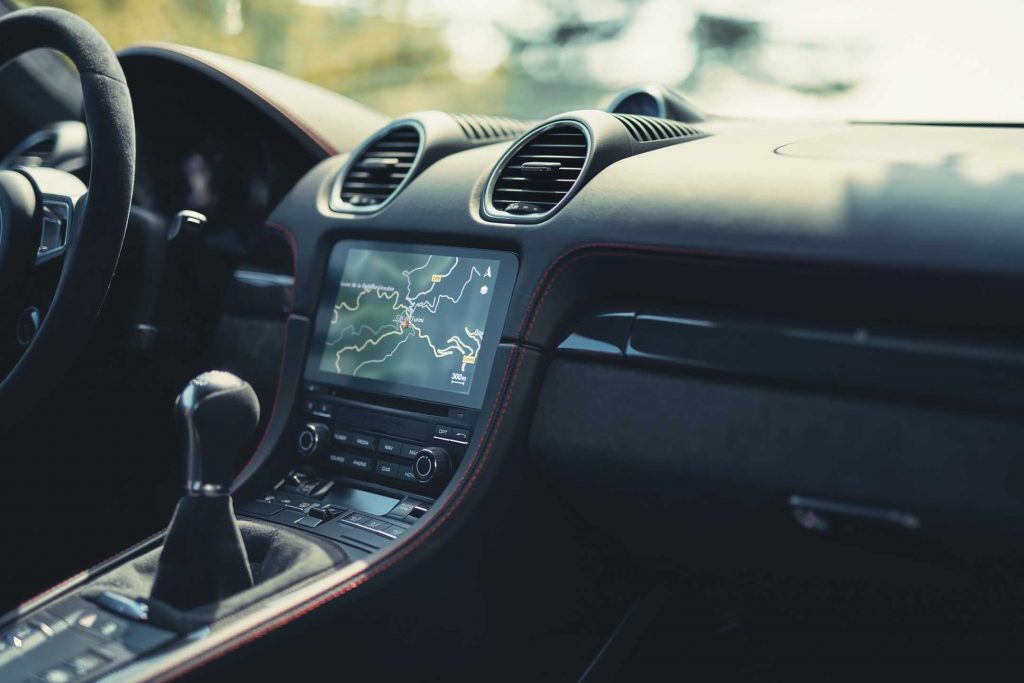 In the end, I reckon that Porsche has brilliantly captured that every-day-any-occasion sportscar character that it, and especially the GTS models of yore, were always renowned for.

In a market where competition is omnipresent and tougher than ever, I reckon the 718 GTS duo might just be the sharpest tools in and around their respective price brackets.