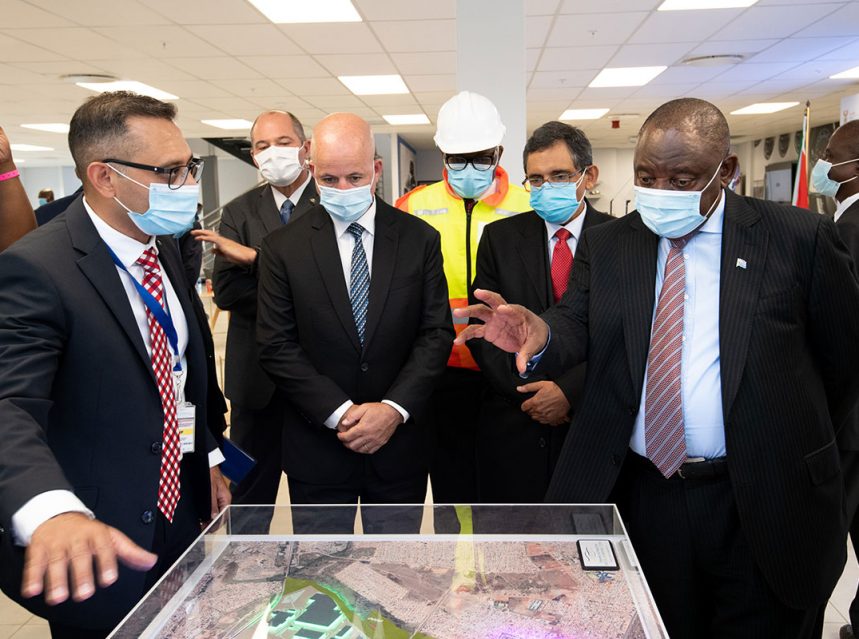 2020 did nothing short of knocking the world off its feet. There is just no understating how devastating the effects of the pandemic have been. On a business level, many have failed to stay afloat, instead choosing to cut their losses and bow out of the race. But not Ford. In fact, the blue oval giant is taking a stand against adversity and ploughing on by making an investment in South Africa that is the company’s most significant in its 97-year history in the country.

In a presentation that was attended by President Cyril Ramaphosa – along with Trade, Industry and Competition Minister Ebrahim Patel, Department of Public Enterprise Minister Pravin Gordhan, Gauteng Premier David Makhura, City of Tshwane Executive Mayor Randall Williams, and senior Ford executives – Ford laid out their business plans for the future.

The main headline of the presentation was, of course, the seismic $1.05 billion (R15.8 billion) investment in its South African manufacturing processes. An elaborate trajectory was mapped out, where Ford highlighted how an investment of such proportions will be utilised to bring positive changes to local industries and livelihoods.

For starters, the investment has afforded Ford’s Silverton Assembly Plant projected revenues surpassing 1.1% of South Africa’s GDP. Locals will also benefit from the 1,200 jobs created by the expanded production, which will increase the local workforce to 5,500 employees. In addition to that, 10,000 estimated new jobs will be created across Ford’s supplier network, bringing the total to 60,000 strong.

But how is all of this to be achieved, you may ask. Well, the annual installed capacity at the Silverton Plant will see an increase from 168,000 to 200,000 vehicles, supporting the production of the all-new Ford Ranger pickup truck for both the domestic market and export to over 100 global markets. In a strategic partnership with VW, the plant will also be used to produce VW pickup trucks. As a result, there will be a need to boost the workforce across the entire production network to meet and sustain these projected figures.

To achieve the projected productivity increase, $686 million (R10.3 billion) shall be dedicated to facilitating extensive upgrades to the Silverton Plant that will increase production volume and promote improved production efficiency and vehicle quality. A new body shop will be constructed, which shall house the latest in robotic technology together with a new high tech stamping plant, both of which will be located at the site for the first time. The latter will use a high-speed line to produce all the major sheet metal for the all-new Ranger, whose production will start in 2022.

Keeping in line with the high tech theme, the facility will also have a fully automated storage and retrieval system for stamping dies located in the facility’s roof, thereby eliminating related labour-intensive processes. A blue-light scanner system will scan surfaces for imperfections to ensure no defective products leave the stamping plant. After all, there is no point investing in something if the end product will be subpar.

Ford also plans to make extensive upgrades to the box line, paint shop and final assembly to ensure efficient vehicle flow within the plant and expanded container and vehicle yards. Of course, with such extensive modifications of the plant in the pipeline, it is imperative to ensure that the non-machine workforce is geared correctly and prepared to work in the new environment. Therefore, Ford will build new vehicle modification and training centres to ensure that workers work at maximum efficiency in the revamped plant.

It is worth pointing out that Ford’s focus is not geared solely on boosting productivity. Most impressive of all is Ford’s focus on making the Silverton Assembly Plant entirely energy self-sufficient and carbon neutral by 2024. This builds on Ford’s recently announced Project Blue Oval renewable energy project, which aligns with the company’s global target of using 100% locally sourced renewable energy for all of its manufacturing plants by 2035 and achieving carbon neutral status by 2050. The first phase of Project Blue Oval is already in motion with the construction of 4,200 solar carports at the Silverton Plant.

“Our aim is to achieve ‘Island Mode’, taking the Silverton Assembly Plant completely off the grid, becoming entirely energy self-sufficient and carbon neutral by 2024. It will be one of the very first Ford plants anywhere in the world to achieve this status,” explains Andrea Cavallaro, director of Operations, Ford’s International Markets Group.

Plans to Modernise Ford’s Supplier Base

It would be frustrating to make improvements to the production system while suppliers are lagging behind. To achieve cohesion, Ford will invest the remaining $365 million (R5.5 billion) to upgrade tooling at the company’s major supply factories. This is meant to raise the suppliers to the same modern standards as Ford’s to ensure excellent quality for the all-new Ford Ranger.

“As part of our extensive investment in the Silverton plant, we are also building a new Ford-owned and operated chassis line in the Tshwane Automotive Special Economic Zone (TASEZ) for this new vehicle programme,” says Ockert Berry, Vice President Operations for Ford Motor Company of Southern Africa.

By having the new line and major component suppliers located adjacent to the Silverton Plant in the TASEZ, Ford will be able to expand production capacity since parts will be sequenced directly to the assembly line. According to Berry, this will significantly reduce logistics costs and complexity, improve efficiency and allow Ford to build more Rangers for their customers.

Ford is also working closely with all threes spheres of government and relevant state-owned entities, such as Transnet, in developing the Gauteng Province–Eastern Cape Province High Capacity Rail Freight Corridor. This full-service line will link the Silverton Assembly Plant and the TASEZ with Port Elizabeth, where Ford’s Struandale Engine Plant and the Coega Special Economic Zone are housed. The corridor is expected to channel all of Ford’s logistics through Port Elizabeth to support the higher production volumes while creating thousands of jobs within the value chain.

This investment is a monumental endeavour that carries a lot of promise for local businesses and people alike. It will improve Ford’s efficiency in producing the all-new Ranger and bring positivity to South Africa’s business landscape. Such a move ought to inspire and encourage other businesses to invest in local companies, despite the uncertainty caused by the pandemic. Hopefully, it will also inspire other local companies to go green and be more environmentally conscious. Thanks to Ford, the future doesn’t look all that bleak.