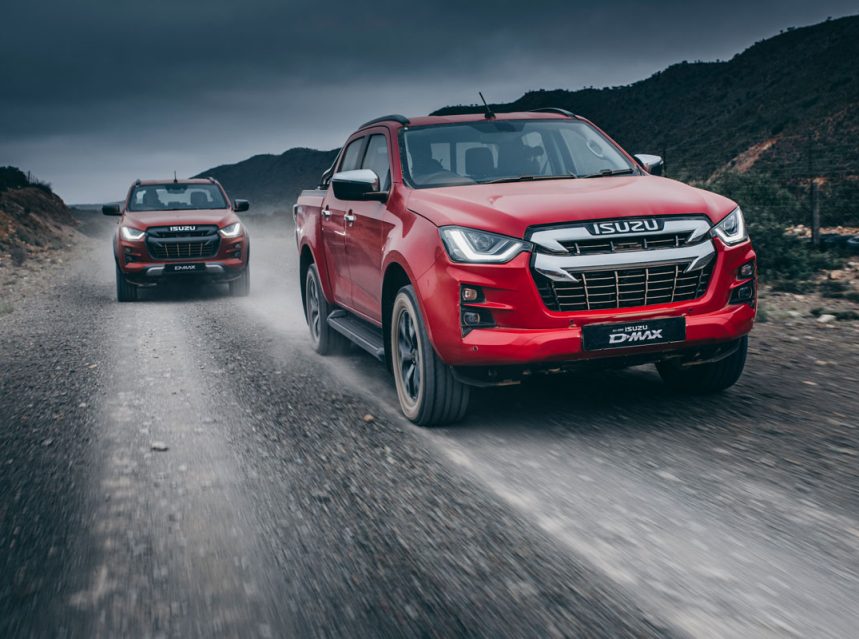 The new D-Max promises to continue providing its trademark reliability and performance while bringing dashing new looks and a well-sorted cabin to the mix. This is good news for potential buyers but a frightening combination for the competition.

For over four decades, the Isuzu pickup has been a staple on our roads, being a favourite for buyers looking for a rugged and reliable workhorse with excellent fuel efficiency. While Isuzu has nurtured its pedigree as much as customers have revered its rugged appeal, the Isuzu pickup has become synonymous with a spartan, utilitarian approach to cabin interior design and aesthetics. And although Isuzu has improved on the cabin quality over three generations and three facelifts, the new 4th generation D-Max heralds a dramatic improvement. Boasting great looks and a refined cabin, the new Isuzu D-Max looks set to take the pickup market by storm. As the resident Isuzu guy, I was eager to see whether there was more to the new Isuzu bakkie than just a pretty face.

In the bold new world of lifestyle bakkies, looks are everything. Isuzu designers grasped the challenge because, my word, this new workhorse looks good. While the outgoing model is still good looking to this day, the marked improvement on the new D-Max is a testament to just how successful the new design language is. The new pickup looks more rugged, bolder and sportier, demanding attention, even in your peripheral vision.

The front end sports a more aggressive fascia and grille, complemented by slimmer and more angular lights with Bi-LED projector headlamps and a redesigned ‘dragon eye’ LED DRL signature on the high-end models. The side view mirrors come with LED edge lighting for the indicators, while the rear comes with crisp new LED taillights. Higher-end trims will come with 17 or 18” alloys, with the range-topper trading in chrome fixtures for a gunmetal finish. There are five types of trims: the entry-level Standard, L, LS, LSE and the flagship V-Cross.

Small things, such as integrating the two-step rear bumper seamlessly into the bakkie’s body, together with minimised panel gaps between the doors and between the cabin and cargo bay, help shake off that industrial workhorse aesthetic to endow the new D-Max with a sense of refinement.

Isuzu has come a long way from its utilitarian roots. While we lauded the outgoing model for having been better refined than its predecessors, there is no ignoring the fact that the cabin still lagged behind some of its competitors as far as luxury and refinement were concerned. Continuing the incremental upgrades to the cabin, the new D-Max boasts the most luxurious cabin an Isuzu bakkie has ever seen. I would even wager that it can now hold its own among the other big names in the segment.

The top range models feature soft-touch materials on the dash where formerly we had to make do with rigid plastics. The comfortable and well-bolstered seats come with leather treatment, and collectively the choice of materials in the cabin creates an innovative and high end feeling that was previously lacking.

We were happy to note that the design and layout of the dash have retained the ergonomic properties we always praised Isuzu for. The driver faces an analogue instrument cluster with a 4.2” LCD multi-information display that can be controlled through a multi-function steering wheel. Centre-stage on the dash is a new Wide Extended Graphic Array (WXGA) touchscreen infotainment system which can be had either as a 7” or a 9” unit, depending on trim. As we have come to expect from modern vehicles, the unit comes replete with Android Auto and Apple CarPlay.

The interior space has been improved, resulting from changes to the bakkie’s physical dimensions. Isuzu increased the wheelbase by 30 mm, translating into increased rear legroom. The back seat has also been tinkered with to give the rear occupants 20 mm more shoulder room. Meanwhile, the rear bench boasts more rake in its backrest, which, as we found out, makes sitting in the rear more comfortable for the new D-Max than it was in the former.

Another welcome touch is the movement of the B-Pillar forward by 25 mm to increase the door opening for the rear doors in the double cab. In contrast, the single-cab and extended cab models feature long doors to make ingress and egress more straightforward. Loading a car seat has never been easier.

Buyers are spoilt with a choice of two diesel engines that build on Isuzu’s long-standing reputation for durability, reliability and efficiency. As standard, all body derivatives of the new bakkie come with a new 1.9-litre Ddi unit which uses common rail direct injection to churn out 110 kW at 3,600 rpm and 350 Nm of torque between 1,800 and 2,600 rpm.

Mid to high-end specs of the extended and double cab can be had with an upgraded 3.0-litre Ddi engine which produces 140 kW of peak power at 3,600 rpm and peak torque of 450 Nm from 1,600 to 2,600 rpm. Both engines can be had with either a six-speed manual or a six-speed automatic transmission. Isuzu says the manual gearbox benefits from optimised gear ratios and an improved shift action and makes the most of the strong torque delivery and excellent fuel economy. On the other hand, the automatic version delivers ideal refinement and responsive performance. It incorporates a sequential sport mode that enables the driver to select a specific gear manually, helpful when towing and off-road driving.

We got an opportunity to drive both engine and transmission derivatives and can report that we were impressed by both. The 1.9 l gave us strong accelerations to highway speeds without hesitation, and we were happy maintaining said rates. Overtaking was also relatively effortless, while the engine proved to be much quieter than we are used to from Isuzu products, which makes it a good highway cruiser. However, the 3.0 l is available to deliver proper performance on cue for those keen on having more power. Undoubtedly it was more responsive and angrier than the 1.9 l and was happiest on the highway where we could stretch its legs.

The new D-Max comes with a three-blade rear leaf spring suspension system. This treated us to a marked improvement in ride quality and vehicle composure over the five-blade system it replaces. Be it off or on-road, the D-Max impressed us with the way it rode over bumps and rough surfaces. Handling the bakkie was also easy thanks to light steering, making it easy to live with the car daily while also being responsive to our inputs at high speeds on the highway.

I have always been a diehard fan of Isuzu bakkies. They are virtually indestructible and carry a pedigree that many brands wish they had. The one thing that held them back was the workhorse persona that buyers in the lifestyle segment failed to resonate with. With revamped looks and a more luxurious cabin, the D-Max has a dual personality where it can be both a lifestyle bakkie and an industrial production tool. With prices ranging from R401, 700 to R814,700, the D-Max is quite affordable compared to the competition. It is an easy recommendation for a beautiful and reliable bakkie for anyone on the market.