The performance SUV world has resolutely gone barking mad! We have finally driven the Jeep Grand Cherokee Trackhawk, the most powerful SUV currently on sale, to ascertain whether its brute muscle translates to searing acceleration out on the road. Lerato Matebese saddles up and grabs the fire-breathing American brute by the scruff of the neck.

Arguably nondescript in its demeanour compared to its milder SRT8 sibling, the Trackhawk variant hardly shouts from the rafters, or peacock displays its brawn with exterior body appendages, spoilers and fins. Indeed, the Trackhawk can only be distinguished by the model-specific bonnet vents, supercharged badging on the front doors, yellow-painted brake callipers and quad exhausts sprouting below the rear valance.

IS THE CABIN RACE-INSPIRED? 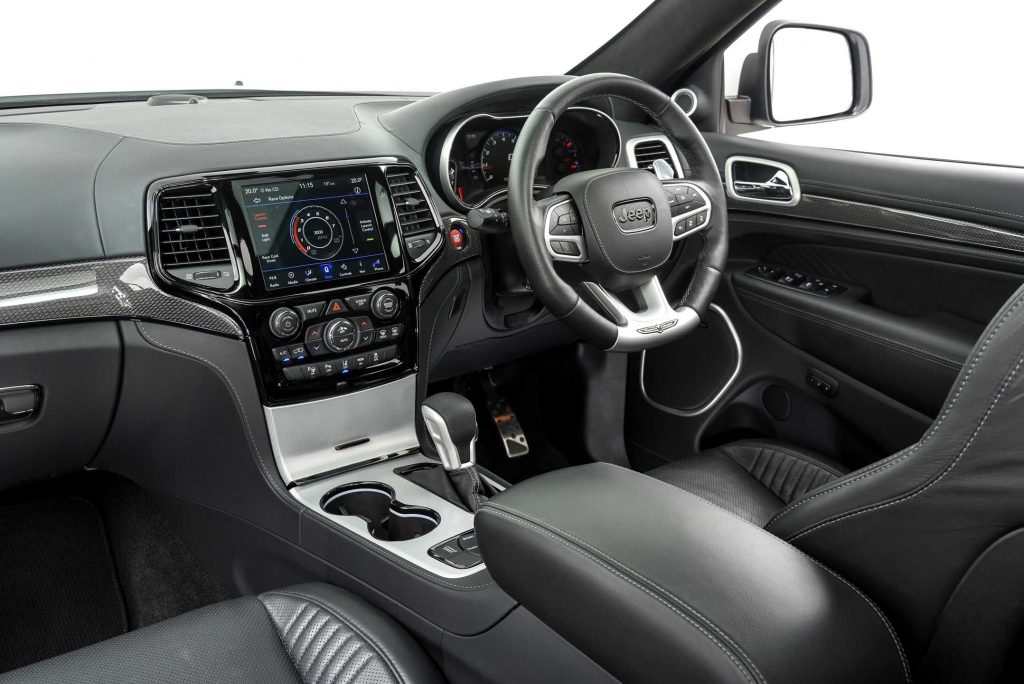 Not in the true sense of the word, but there are sporty hints in the form of the three-spoke, leather wreathed steering wheel with paddle shifts, carbon fibre inlays peppered about and some silver contrasting plastics and Trackhawk embossed seats.

Overall, the cabin architecture is beginning to show its age, but in its defence, it still feels well-screwed together with very little in the way of rattles and squeaks. The instrument cluster is a mix of analogue and digital with a speedo readout to 320 km/h, something that continues to pique the attention of fuel station attendants to no end.

The Trackhawk is powered by a rip-snorting 6.2-litre V8 aided and abetted by a 2.3-litre supercharger (that spins up to 14,000 r/min) to put out 522 kW and 868 Nm through an 8-speed automatic transmission, to all four corners of the car.

There’s launch control to achieve quick off the line sprints, but as I found out, the system has some gremlins, but a little about that later. For maximum traction off the line and out of corners, there is a limited-slip differential on the rear axle that does its best to shuffle power and torque. 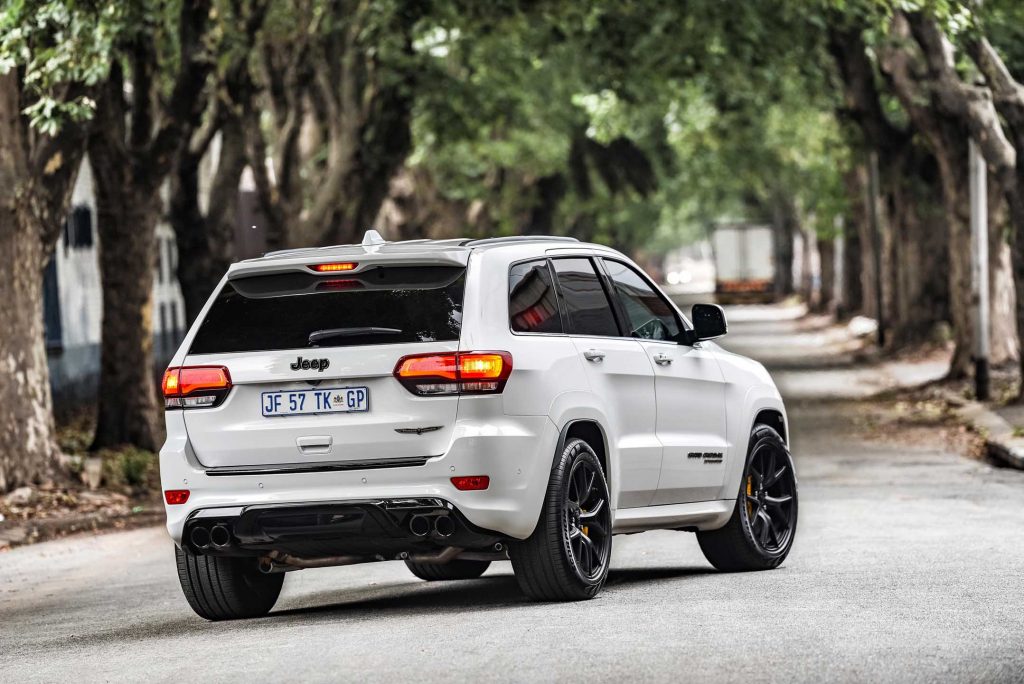 Forget refinement and incognito vibes, the Trackhawk throws caution to the wind with its raw, undistilled driving experience. While the rumble of the burly V8 engine is always in the foreground, it is the charming whine of the supercharger that kept me enchanted the most.

In a market where most performance SUVs are discreet when pottering about town, the Trackhawk is a welcome rebellion of the status quo and goes about things its own American way. It rumbles under full-bore acceleration and the blips on downshifts, interspersed by the whine of the supercharger leaves you giggling like a teenager.

HOW DOES IT GO DOWN THE ROAD?

It is quick, although not quite in the peel-your-eyelids-back sort of manner. In fact, there are lesser-powered SUVs that can dispense with the Trackhawk, but it is the in-gear acceleration where it feels the most brutal. It revs quickly and cleanly to its rev limiter and, in manual mode, you find yourself having to shift earlier than you would anticipate to avoid slamming into the said rev limiter.

Launching the Trackhawk off the line is a simple affair of pressing the launch button, left-foot braking, build up the revs – which can be varied via the infotainment screen up to 3,000 r/min – and Bob’s your uncle. However, with so much torque, the brakes do tend to squirm under the huge wall of twisting force, making clean launch starts somewhat of a hit-and-miss affair.

Despite the intermediate Pirelli Scorpion Verde tyres measuring 295/45/20 shod to our test car, the Trackhawk is not only a straight line, drag-style warrior, but can also corner relatively well with minimal body roll. Granted, it might not pull similar g-forces as a BMW X6M or the Porsche Cayenne Turbo, but it is anything but clumsy around the bends.

After spending time at the helm of the Trackhawk, I can fully understand its appeal, however, at a price of R2m, there are plenty of sophisticated performance SUVs that one can opt for. And, to be frank, the Jeep’s dated architecture is now showing its cracks. That aside, though, the Jeep Grand Cherokee Trackhawk has character in spades and the mere fact that it exists, warts and all, simply warms the cockles of my heart to no end.