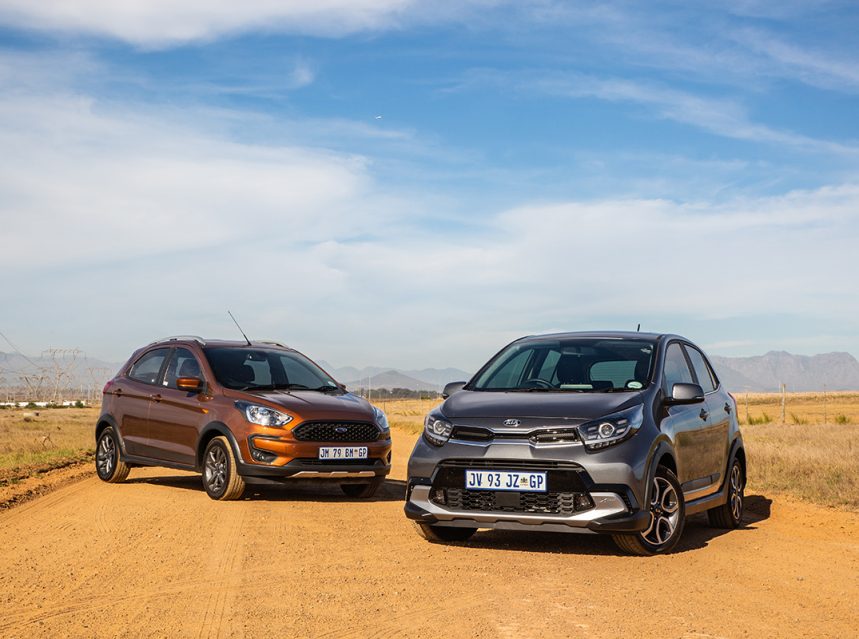 To capitalise on the crossover craze in the automotive world, many car manufacturers have resorted to using faux style crossover elements to enhance the stature of their pint-sized entry-level hatchback models, thereby heightening their desirability.

Ford and Kia are the latest manufacturers to follow the example set by Toyota (with the now discontinued Etios Cross), Volkswagen (with the also defunct CrossPolo), Renault (with the Sandero Stepway initially, and now with the Kwid Climber) to expand their presence in the rapidly growing utility vehicle segment.

Based on the Figo hatchback, the Figo Freestyle enters the sub-B segment for compact utility vehicles (CUV) with two models, starting with the Trend and headlined by the well-appointed Titanium. Both are powered by Ford’s eager 1.5-litre three-cylinder Ti-VCT engine.

Similarly, the refreshed Kia Picanto has gained an adventure focus with the X-Line model featuring distinct crossover features, including a redesigned radiator grille – a new interpretation of Kia’s well-known “tiger nose” – and aggressive front bumper, a bespoke rear bumper with faux skid-plate detailing and full-LED rear lights at the rear.

Replacing the Smart model in the Picanto range, the X-Line also gains crossover-inspired side cladding, mudguards and 15″ alloy wheels. Available in ten exterior colours, the X-Line is powered by Kia’s 1.25-litre four-cylinder MPI engine, coupled with either a five-speed manual or four-speed automatic transmission.

The stance of the (slightly bigger, compared to the Picanto) Figo Freestyle is emphasised by a black grille, black foglamp housing accents and a new sculpted front bumper, distinctive double-spoke 15” alloy wheels framed by black wheel arch mouldings and special decals applied to the lower sections of the doors, along with “Freestyle” badging on the rear hatch.

A key element is the Freestyle’s raised ride height of 190 mm (16 mm higher than the standard Figo) with integrated front and rear skid plates providing extra underbody protection and roof rails fitted as standard. However, unlike the Picanto X-Line, the Freestyle’s drivetrain is only available with a five-speed manual gearbox.

A soft-touch gear knob, audio controls on the steering wheel, a keyless push-start button, automatic climate control, an auto-dimming rear-view mirror, automatic headlamp activation, and rain-sensing windscreen wipers are all standard, plus a reverse camera linked to the 6.5” colour display for the Sync3 system with Bluetooth and voice activation, and Apple CarPlay or Android Auto compatibility.

While they may be on a par in terms of interior specs, the two cross-pretenders differ significantly in dynamics. The Freestyle, with an impressive 91 kW and 150 Nm of torque available, has a distinct power advantage over the X-line (61 kW and 122 Nm), and the Ford easily out-accelerates the Kia (0-100 km/h in 11.8 seconds, compared to the Picanto’s 12.5 seconds).

However, when it comes to road holding, ride comfort and cornering prowess, the Kia, with its rigid body shell and high torsional stiffness, is on another level compared to the Indian-built Freestyle. Due to its higher ground clearance, the Ford is also prone to undue body-roll in corners, although it does improve its ride quality on poorly surfaced roads – something that cannot be said of the X-Line with its 154 mm ride height.

So, the brilliant little engine in the Figo Freestyle is let down by its imperfect on-road dynamics, as well as some minor quality issues with the interior trim, while the less perky but more wieldy Picanto certainly feels like the more solid and well-built vehicle of the two.

Besides the above, the price difference between our two contenders can be a dealbreaker, as the Picanto X-Line manual is available for R239,995, including a five-year/unlimited km warranty and two-year/30,000 km service plan, while the Freestyle Titanium is nearly R27k more expensive (R266,300), with a four-year/120,000 km warranty and optional service plan.

If you’re all about the extra power, you can consider the Freestyle Trend (R243,300), but then you will have to be prepared to forego many of the niceties in the top model. So, if you want a faux-style crossover, we recommend the little Kia with its funky X-Line bits, more so as the Figo Freestyle will probably be discontinued quite soon due to the closure of Ford India’s plants in Chennai and Sanand.