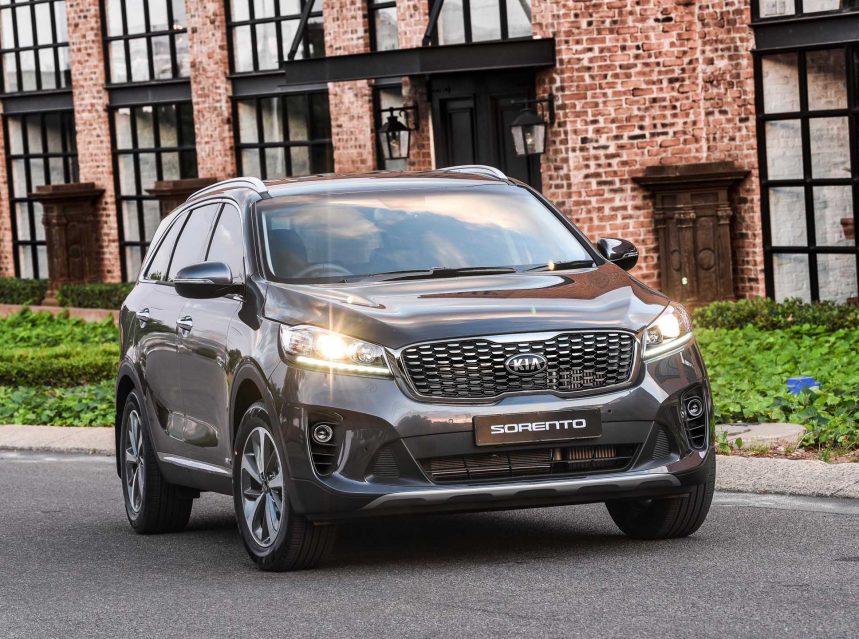 Korean carmaker KIA this year commemorates two decades of doing business in South Africa. FERDI DE VOS joined the KIA team on a road trip from the Mother City to the Windy City to celebrate this milestone and to introduce the new Sorento- and Sedona models to the local line-up.

So, how do you celebrate your twentieth anniversary in a memorable way? Well, if you are a relatively young brand like KIA (in South Africa, that is), you commemorate it with a great road trip, taking the back roads from Cape Town to George, and from there to Port Elizabeth.

However, to give the event more impetus you also use it as an opportunity to introduce the latest enhanced models in your range – the facelifted Sorento, proud flagbearer for KIA in the mid-size SUV market, and the revamped Grand Sedona, a stalwart and multiple ‘Best Buy’-winner in the MPV segment.

The KIA-story in South Africa commences in 1998 (well, at least the official version, as some vehicles, including a couple of left-hand drive first-generation Sportages, were imported here before then) when KIA Motors SA, incorporated under Motus Corporation, a division of Imperial Holdings, was founded.

From small beginnings, with only the sub-compact Pride (based on the erstwhile Mazda 121) initially imported, the business under leadership of Ray Levine slowly grew, but it was the (official) introduction of the Sportage, as well as the small Rio hatch and sedan, that sparked consumer interest in the Korean brand.

Other earlier models, like the Sephia, Shuma, Carens, and Clarus, was not popular here, but after 2005, with newcomers such as the Sedona (initially badged as Carnival), Sorento, Cerato, Picanto, and Soul, sales increased year-on-year, and KIA now has a network spanning more than 70 dealerships throughout South Africa, including Namibia, Swaziland, and Zimbabwe. 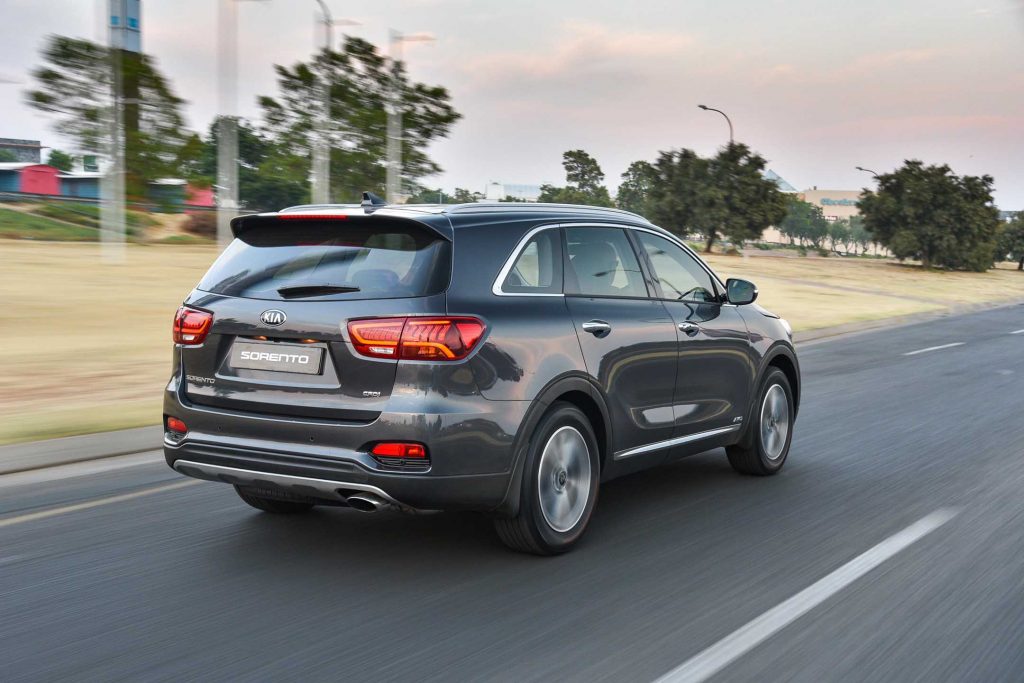 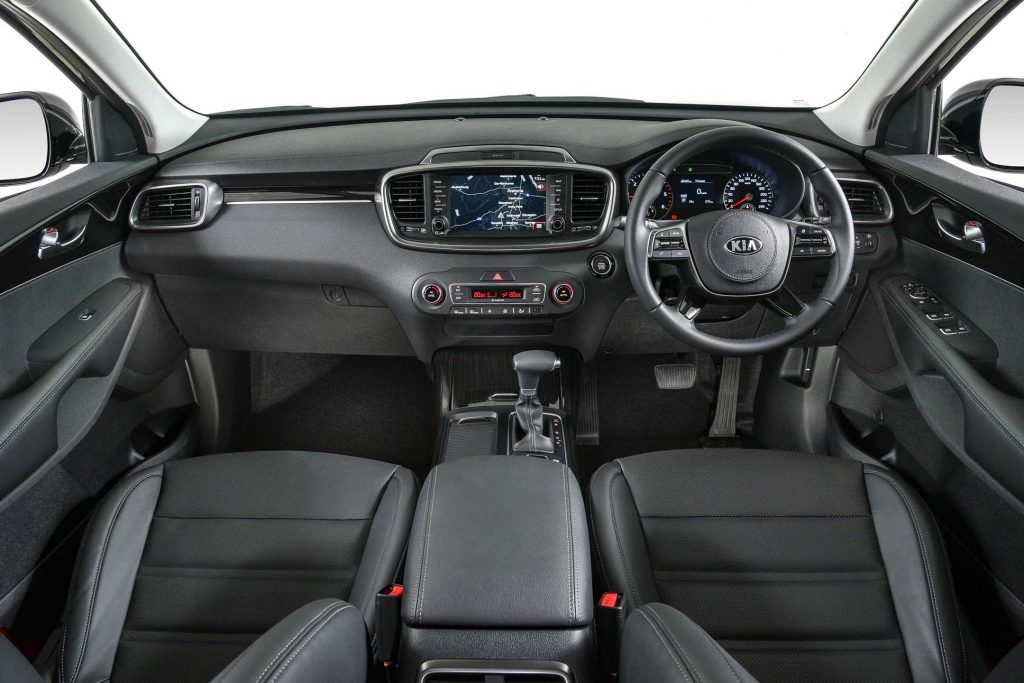 Enhancements to the rear design include a new bumper, sleeker tail lamps, and a subtly revised tailgate, while inside, the upmarket look and feel is further enhanced with a new, more tactile steering wheel, a new gearshift lever, a revised instrument cluster with improved graphics, and alterations to the air vents and the centre console design.

We found the (now standard) leather seats superbly comfortable on our long drive and the Sorento is surprisingly roomy at the rear, even with all derivatives that now offer seven seats. With the foldaway third-row seating folded flat, the luggage compartment offers up to 605 litres of luggage space. 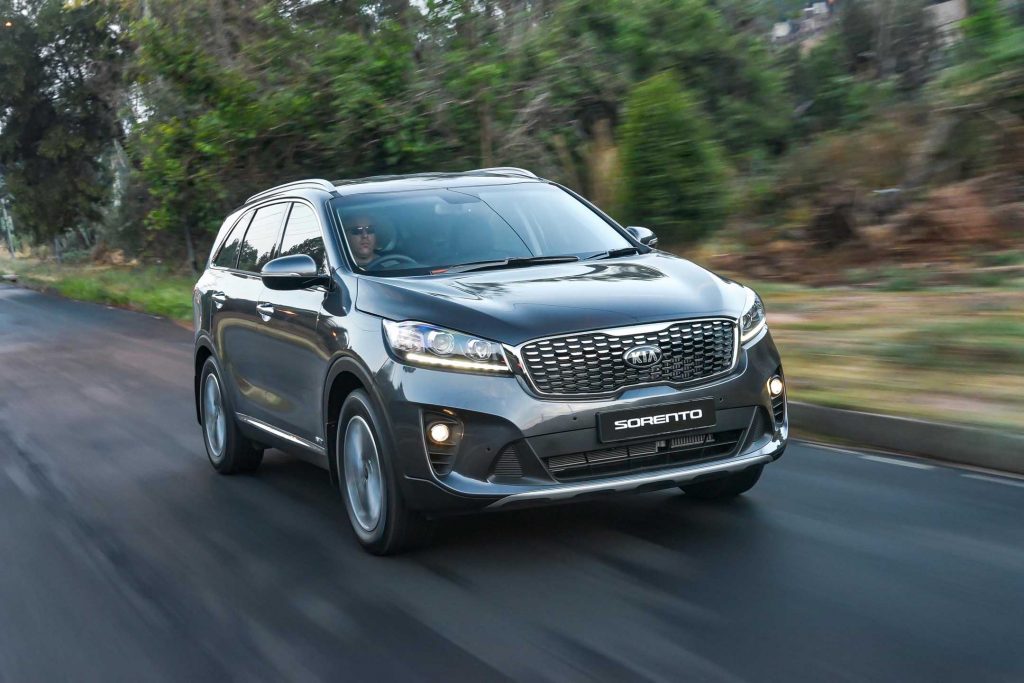 On the tarmac, the ample power and low-down twisting force of the 2.2-litre turbodiesel (also used in the Hyundai Santa Fe-) impressed with its smoothness and tractability. The driving experience was further enhanced by a new, smooth-shifting eight-speed automatic transmission with settings for four different driving modes (including Smart mode).

The Dynamax all-wheel-drive system of KIA electronically distributes drive to all four wheels, and thanks to unibody construction (in contrast to the ladder-frame underpinnings of most of its competitors) the Sorento felt steady and surefooted in the corners.
The Sorento is now also available in mid-spec LX or mid-high-spec EX form, available with either front-wheel or all-wheel drive. Prices range from R569,995 to R639,995. 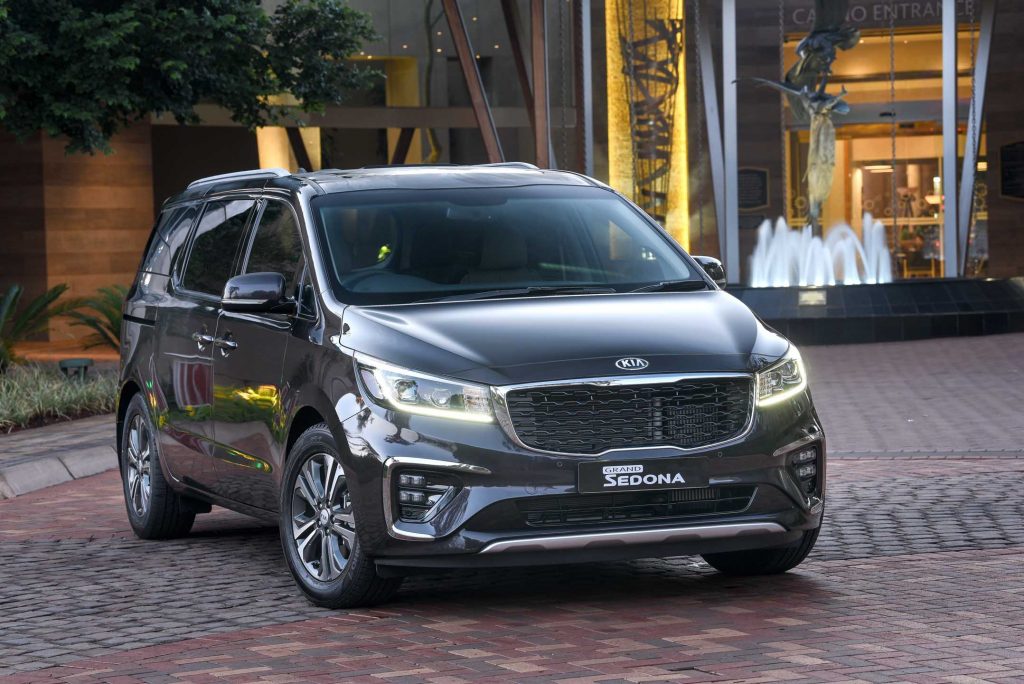 We also sampled the Grand Sedona, now in its third incarnation. It was originally released as the Carnival, but this changed in 2007 with the introduction of the second-generation model.

The multiple award-winning MPV has also been subtly revamped with a revised front bumper, updated ‘tiger nose’ grille and newly reconfigured headlamps while at the rear it also sports a new bumper and revised taillights with a new LED lighting signature on higher spec models. 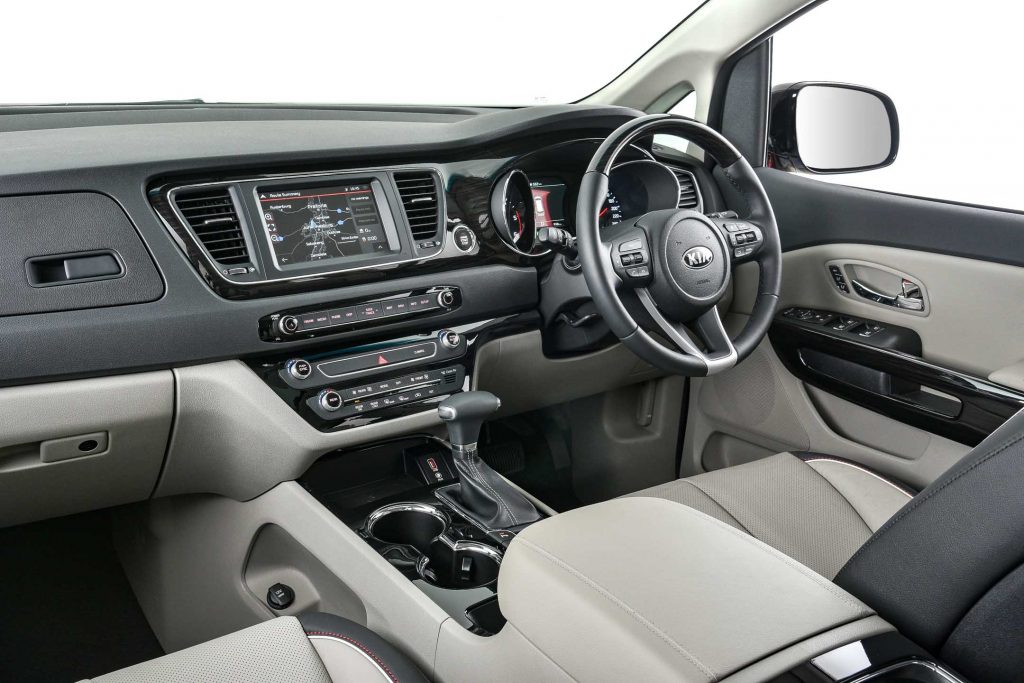 However, it is the luxury, comfort, and space inside – now with a redesigned fascia and a new graphics cluster – that makes the latest Grand Sedona stand out in its class, and a perfect companion for South African families. 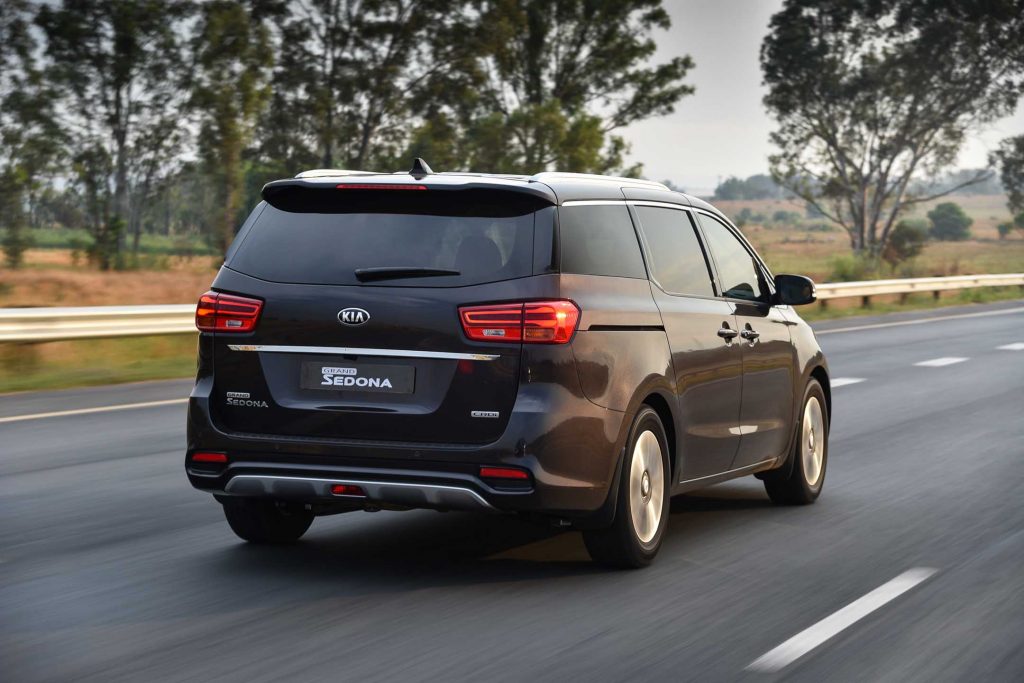 KIA has also revised the model line-up, discontinuing the SX grade and adding a new EX+ specification to the line-up. Even the entry-level EX features a raft of standard specification, including a new 7” touchscreen and seven-seat configuration, with an 11-seater option available on special order. 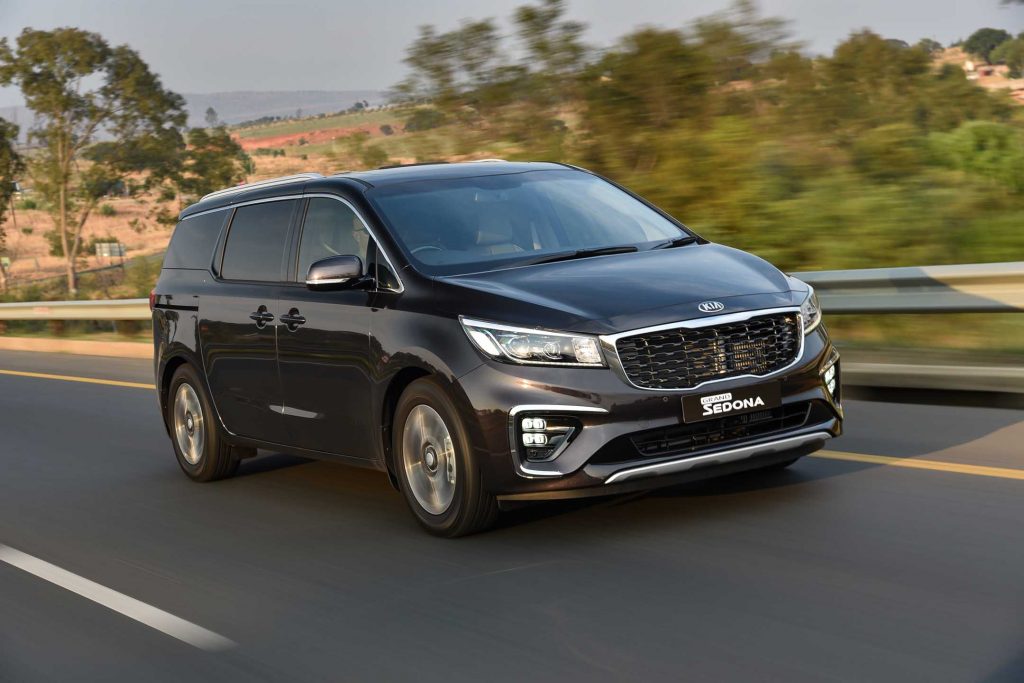 The same 2,2-litre ‘R’ turbodiesel mill as used in the Sorento, coupled to the new eight-speed automatic transmission, is now the only engine option available. On highways and good tar roads, the Grand Sedona enthralled with its quiet, confident demeanour, and it also impressed in terms of space.

With prices ranging from R599,995 for the entry-level EX to R782,995 for the flagship SXL, the Grand Sedona is a strong value proposition compared to rivals such as the Mercedes-Benz Vito, VW Caravelle and Hyundai H1.