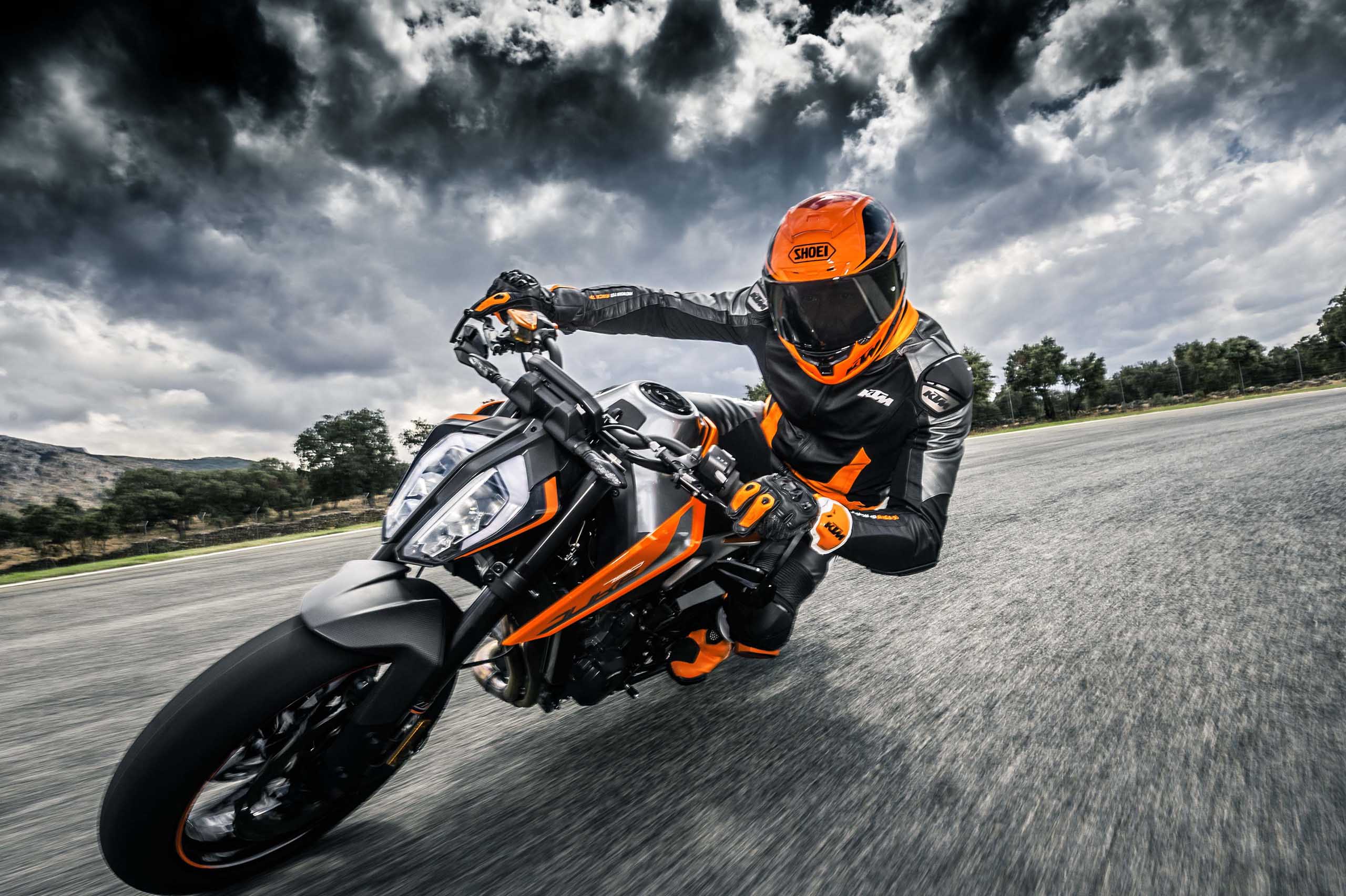 Judging by the 790 Duke, GAVIN FOSTER has no doubt that KTM’s new 800 cc parallel-twin engine is going to open many new doors for the Austrian manufacturer.

Vertical-twin, or parallel-twin engines as it’s also known, have over the past decade or so come back into its own. In the 1950s and 1960s, manufacturers like Triumph, BSA, and Norton were world leaders with their 500 cc and 650 cc motorcycles regarded as big, powerful bikes.

A modest (by today’s standard) 50 horsepower was considered to be big and burly, and more than enough for anyone to handle. The big, vibrating, oil-leaking and unreliable four-stroke twins fell out of favour during the Japanese era of domination that started in the mid-sixties.

From then, until about ten years ago, the parallel-twin was considered a rarity, until marques like Triumph, BMW, Kawasaki, Yamaha and Honda all started using the format again, often with uneven crank throws and ignition pulses to make them sound and feel like v-twins.

Often, these displacements ranged between 650 cc and 800 cc, and produced anything from 60 to 90 hp using engine-driven counterbalance shafts to eliminate vibration. The parallel-twin offers various advantages over the four. For starters, it’s compact and easy to package and also offer more simplistic mechanical components that result in cheaper manufacturing costs, and easier and more affordable maintenance than ‘conventional’ three- or four-cylinder engines. Then there are the engine characteristics, and well, on that front, it’s both smoother and more powerful.

More powerful? Until recently, that meant 65 to 70 horsepower for the 650 twins, 85 for the BMW 800 cc twins, 95 for Honda’s 1,000 cc Africa Twin and around 110 hp for the bulky Yamaha Super Tenere 1,200 cc. That’s changed with the arrival of the new 799 cc KTM 790 Duke as it produces a staggering 105 hp of power and 87 Nm of torque in a compact, lightweight package. The engine is KTM’s only parallel twin in an orange sea of single-cylinder and V-twin offerings and is only available in the 790 Duke. 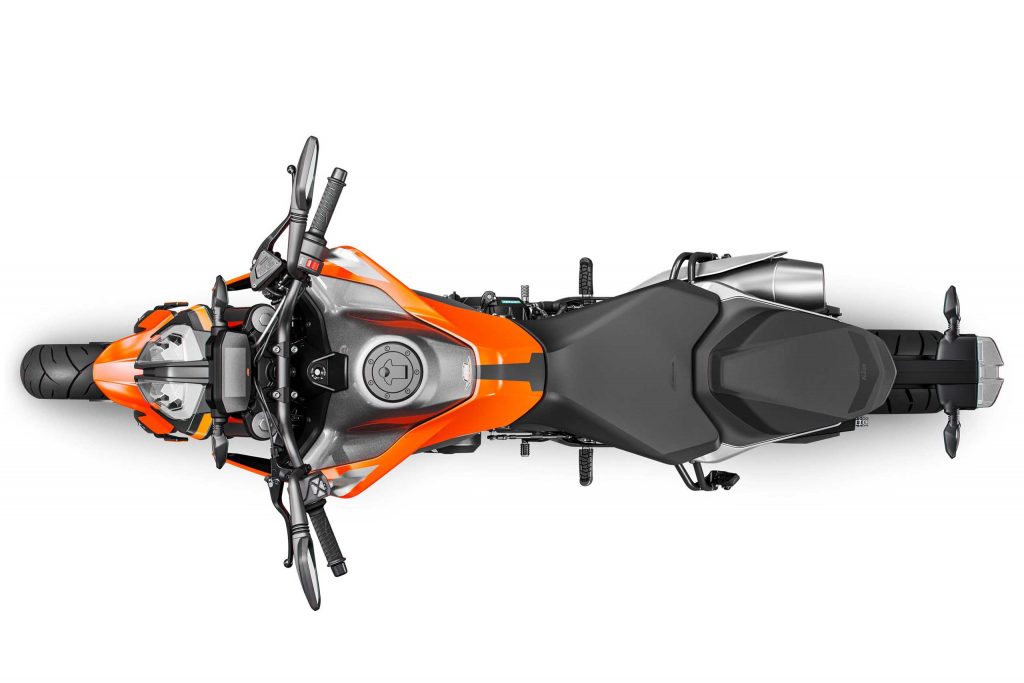 Our first impression of the Duke was just how small in stature it is. Thanks to its short and narrow frame, it’s easy to reach the ground. It also feels as if the majority of its 179- kilogramme mass is stowed low-down in the frame.

Wheeling it in and out of the garage is a cinch, as is the act of climbing aboard. From the saddle, the front wheel and mudguard are tucked away invisibly beneath the instrument pod, and the bike feels like a nice compact 250 cc machine.

Click the gear-lever into first, turn its ear and ease out the clutch, though, and all illusions of this bike being friendly, or little, are instantly banished. The exhaust pipe barks, the clutch bites, the rider gulps, and the motorcycle sets off like a boy-scout running late for a Friday evening rendezvous at the guide hall.

KTM has fortunately elected to equip the bike with a full-house of rider aids like wheelie control, cornering ABS, launch control, traction control, a quick-shifter (up and down) and four riding modes. All four of the latter allows access to the whole 105 horses, but serve them up in different ways.

We found that Sports mode is an excellent all-round setting while setting it into Rain calms everything down to very controllable levels in the wet. The controls for all this gadgetry are accessible through a reasonably intuitive switch on the left handlebar.

It must be that the designers wound up spending the entirety of their budgets on electronics since the makers of the Duke opted to fit it with only a basic WP suspension that’s only adjustable on the rear monoshock. While that’s preload-only, we expect an R version is waiting in the wings with the fancy stuff included in the suspension and braking departments. 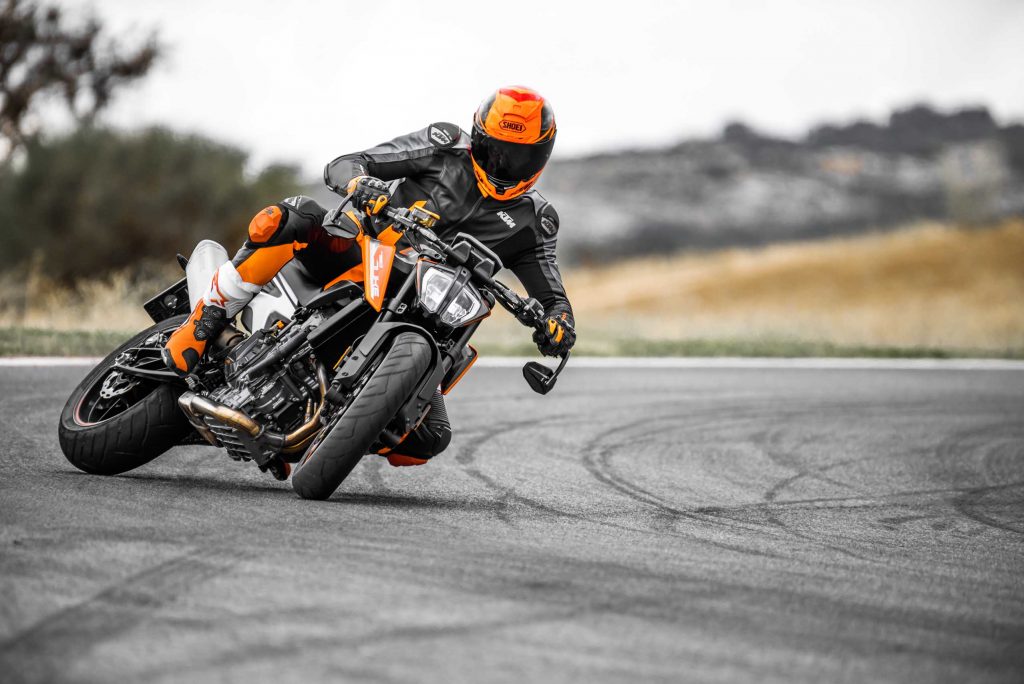 Although the Duke is very short, it’s surprisingly stable for what it is, and since this impression may be partly due to the hydraulic steering damper, the bike is very easy to get used to. The 14-litre fuel tank is limited to around 200 km, but then again, this isn’t intended as a tourer. Its sole raison d’être is to give hooligans practice at what they do best, and if they can do it safely, why not?

The KTM 790 Duke is a quality product that does exactly what it says on the box. It’s light, nimble, very quick, well specced and, above all, fun to ride. At R148,000, it’s also reasonably priced, and we predict it causing quite the stir in the middleweight adventure market when a dual purpose version is likely to arrive sometime next year.