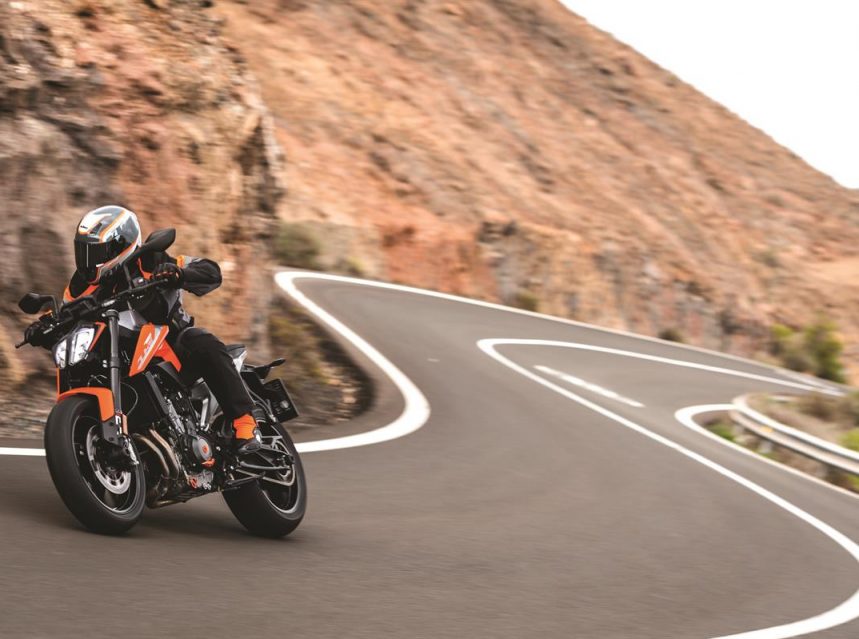 Renowned for making heart-throbbing two-wheel machines with either single-cylinder or V-twin engines, KTM has launched a fresh assault on the middleweight market with a potent new 800 cc street-fighting parallel twin that was recently taken to task by GAVIN FOSTER.

While the motorcycle industry has steadily declined over the last decade, Austrian manufacturer, KTM, has developed into the single biggest European motorcycle producer. Last year saw them increase sales to a record 238,408 new KTM and Husqvarna motorcycles, which was a 17% increase over 2016, and the company’s seventh consecutive year of record sales.

THE KTM ASSAULT
The Austrian manufacturer has since the millennium change, gone from being a manufacturer of mostly single-cylinder dirt bikes, to being celebrated for its big single-cylinder and V-twin adventure motorcycles and, since 1994, aggressive naked street fighters carrying the same engines.

Now, 24 years after the arrival of the iconic KTM Duke 620 single-cylinder street fighter, the engineers and designers have introduced a brand new parallel-twin engine in a brand new street bike – the 790 Duke. Every KTM twin previously produced, from the 950 Adventure in 1993 to the mighty 180 hp 1,290 cc models available today, has had its cylinders arranged in a 75-degree V configuration. The new vertical-twin layout offers a few significant advantages over its gorgeous-sounding V-twin stablemates.

According to the bike’s project leader, Jurgen Hager, one of the more mundane of these was that it would look more like the single cylinder KTM models potential buyers probably owned before, rather than the somewhat intimidating big V-Twin bikes. Another was that it would be easier to centralise the mass of the engine in the bike, making it more compact and easier handling. A third was that the engine would be shorter than a V-twin motor and allow the front wheel to be tucked further back for quicker steering.

NEW POWER
The new light and compact liquid-cooled DOHC eight-valve engine has a 270-degree crankshaft, ostensibly to deliver better traction because of the uneven firing strokes, but it certainly won’t hurt that this configuration allows a parallel twin’s exhaust note to emulate that of a V-twin. The Duke uses two counterbalance shafts to eliminate vibration, one in the cylinder head and the other driven off the crankshaft, and the engine is a full load-bearing component of the tubular steel trellis frame. The bike has two oil pumps and there are low-friction coatings on the pistons and any other surface that looks like needing them. With 105 hp on tap at 9,000 r/min and 87 Nm of torque reporting for duty at 8,000 r/min.

The lightweight KTM compares favourably with the Ducati 821 Monster (109 hp), the Yamaha MT-09 (115 hp) and the Triumph 765 Street Triple (123 hp). At 169 kg (dry) the KTM is considerably lighter than all of its rivals except the three-cylinder Triumph, which is claimed to weigh in at 168 kg. Fuelled up and ready to go, the KTM will still weigh well under 200 kg – the factory reckons it stops the scale at 179 kg.

If you try to compare motorcycle brands to their four-wheeled equivalents, KTM would be Porsche, Triumph would be Jaguar, the big four Japanese manufacturers would all be Subaru, and BMW would be – well, BMW. KTM, like Porsche, produces thoroughbred products that are all focused primarily on performance, and image.

RIDING THE CHANGE
The 790 Duke keeps with the plan, and the bike comes with a class-leading package of electronic rider aids. There are three riding modes — Sport, Street and Rain – along with lean-angle-sensitive traction control, cornering ABS, launch control and something called spin adjuster, which presumably allows more skilful riders to dial in whatever level of wheelspin they want. The anti-wheelie function can also be deactivated should you feel the need to bypass a ladies’ dormitory or hockey field on your travels. Just saying.

The bike comes with White Power suspension front and rear, but the factory chose to keep things reasonably simple – and affordable – with limited adjustability front and rear. On the other hand, most buyers who ride exclusively on the street will miss nothing except the bragging rights as far as that’s concerned. The factory could, of course, also introduce a Duke R version with all the appropriate bells and whistles at a later stage.

LAST WORD
There’s no doubt that the new KTM’s going to be a winner in Europe, but South Africa may be a little different because naked bikes traditionally don’t sell well here. There’s apparently going to be a 790 Adventure arriving next year, though, and KTM will sell as many of those as they can cajole out of the plant. For many riders, it would make more sense than the high powered and expensive heavyweight 1,290 cc models. The KTM 790 Duke will arrive in South Africa in May. Pricing has not yet been announced.