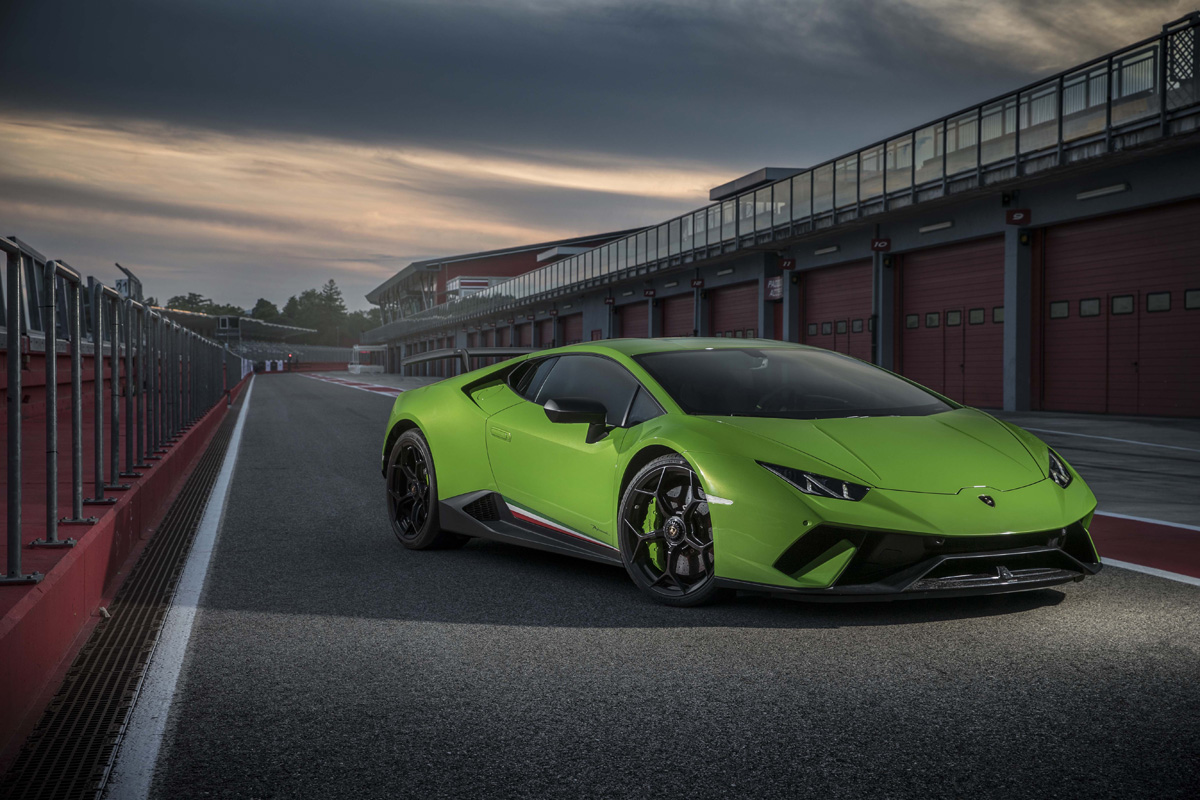 During Lamborghini’s Sturm und Drang days in the 1970s and 1980s, the legendary Italian supercars were considered wilder and crazier, perhaps even cruder and more tasteless, than Ferraris of the same era. While German involvement with the brand may have toned this down somewhat, the Huracán Performante is every bit as mad as anything that rolled out of Sant’Agata in those years.

Lamborghini has been changing lanes over the last two decades, all to attune itself better to the changing times, and the changing tastes of its buyers. Not too long before the brand was acquired by Volkswagen Group in the late 1990s, and subsequently aligned closely with Audi, the group’s performance-oriented brand, it was the self-styled “bad boy” of the sports car world.

Wild, noisy, brash, and sometimes deadly, the machines that sprang forth from the bespoke Bolognese sports car maker may have captivated a generation, but in the new era, buyers prefer their performance machines to be dignified, easy to live with, and more technologically up-to-date. That all sounds very civilised, but, being from the captivated generation myself, I cannot help but wonder whether the brand is not at risk of losing the essence of what makes it so supremely unique?

To be fair, Lamborghini has gained immensely from the engineering might of its German overlords, and we’ve seen the benefits play out in the Lambos of the last 20 years, and acutely so in the three model ranges that the company produces: the Huracán super-sports car, the Aventador super-hypercar, and the new Urus SUV.

The Huracán, in particular, is meant to provide an entry point for those who want to start their Lamborghini journey, and offers enough scope across the range for Lambo newbies and enthusiasts alike.

There are three models in the Huracán range, all available in either coupé or Spyder form; the all-wheel-drive LP580-4 that can easily be mistaken for a very sporty Audi; the rear-wheel-drive LP580-2 that can’t, and the track-oriented, mad-as-a-hatter, Performante.

Created for the well-heeled enthusiast who wants to test their driving skills, as well as thoroughly impress their neighbours, the maniacal Huracán Performante has arrived to reassert some of the brand’s more raucous characteristics while also proving just how technologically astute Lamborghini has become. 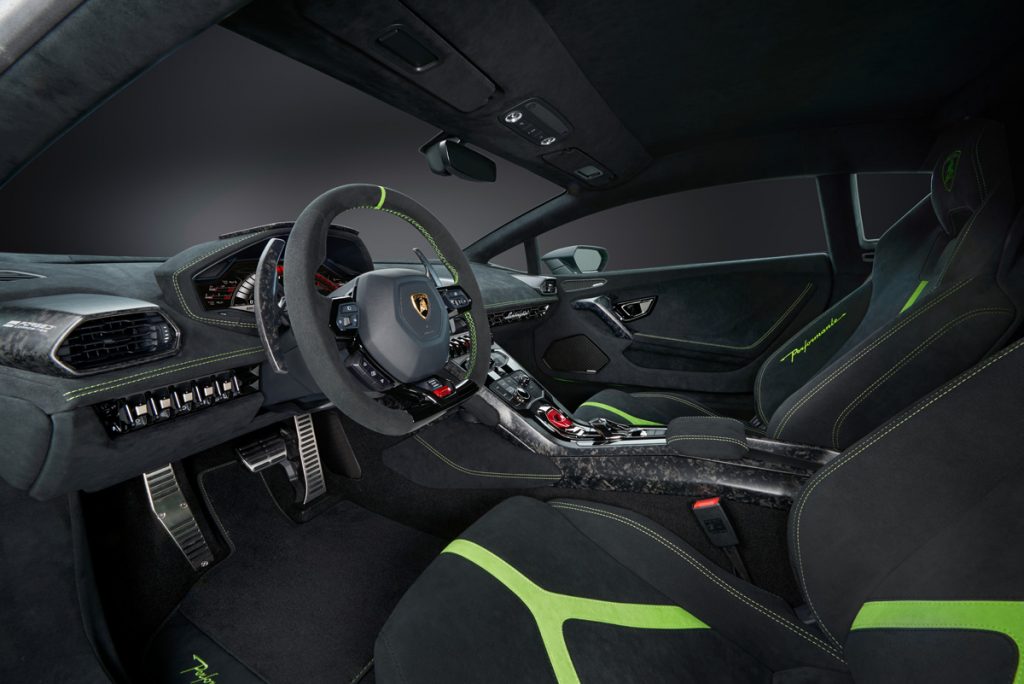 German automakers love their acronyms, and this seems to have rubbed off on Lamborghini in a big way. The Performante leads with a corker: ALA, which stands for “Aerodinamica Lamborghini Attiva” and it is proof of the ancient adage about racing improving the breed. Lamborghini might not be at the absolute frontline of motorsport, but its GT3 cars do well in the popular Blancpain series, and its Trofeo race series attracts a lot of talent.

ALA technology flows forth from the expertise derived from these endeavours, so the Performante’s ALA means that the body of the car has been designed in such a way that it guides the air-flow across itself, to do a variety of contradictory, yet essential things, such as stick to the ground, reduce drag, go faster, turn in even more sharply, and find the sweet spot between understeer and oversteer. All within a 15-second time window.

The basics of the system work like this… The Performante’s front spoiler is constructed from forged composites with active flaps on its top surface that work in parallel with twin ducts on the engine cover, that are, in turn, connected to the inner channels of the enlarged rear wing. When the front spoiler flaps are closed, the air is directed over and alongside the car towards the rear spoiler, providing additional downforce on the rear end. This reduces lift and keeps the car clamped to the road as your speed increases.

Naturally, larger wings also mean more drag, so, to go even faster, those same flaps will open to funnel air through channels underneath the wing to reduce drag, allowing the Performante to blast from zero to 100 km/h in 2.9 seconds, and placing it in the elite sub-three seconds club. Beyond the blistering acceleration to 100 km/h, the 200 km/h mark is reached in 8.9 seconds, while the car tops out somewhere in the 325+ km/h vicinity. 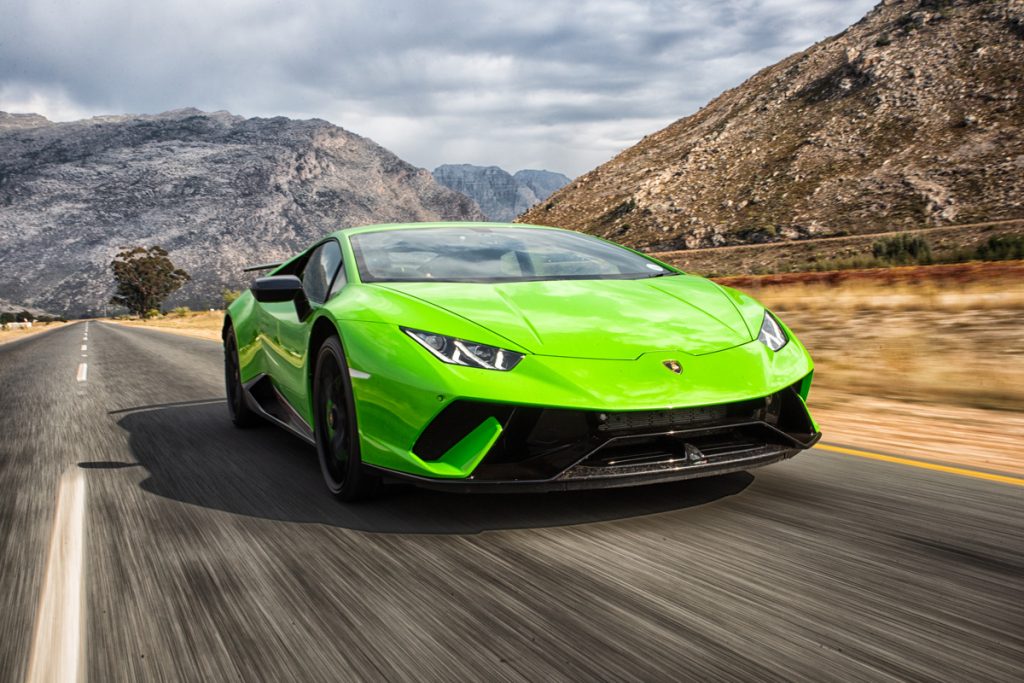 However, it is not how fast the Performante goes that makes it one of the very best cars in Lamborghini’s illustrious history; it is the way that it goes fast. The most intriguing part of the ALA’s functionality is that the ducts work independently, which means that the generation of downforce is independent too, and occurs on the side of the car where it is needed, improving cornering immensely. Lamborghini calls it “aero vectoring”, I call it witchcraft.

To experience the real benefit of the system, and the sheer genius of the car itself, you need to take it out on the track, although the Performante’s on-road manners are impeccably German as well.

It’s almost impossible to mentally keep pace with the Performante when the bull is at full rage. The experience, and one’s responses, become more intuitive than reflexive, as the car’s front end peels into each corner, and you can feel the steering loading up with reassuring feedback. The tyres offer seemingly endless grip, as the all-wheel-drive system allows you to lean ever harder into each apex, the traction control system permanently engaged (unless you’re running the car in Corsa mode), but never does the four-wheel traction dampen the ride.

Being one of the last remaining manufacturers to employ a naturally aspirated, non-hybrid engine in their super-sports cars, Lamborghini has kept the spirit of its wild past alive in the 5.2-litre V10 that powers the Huracán. In the Performante, it produces an eye-watering 470 kW at 8,000 r/min, while 600 Nm of torque bleeds to the road lower down on the rev scale, at 6,500 r/min, creating an aural symphony of metallic purity, as it syncs seamlessly with the seven-gear LDF (Lamborghini Doppia Frizione) dual clutch system. It undeniably sounds more stimulating than the current generation of Formula One engines.

The engine boasts a new intake manifold designed explicitly for the Performante, while the exhaust system is lighter, thanks in part, to it’s new titanium valves.

The Performante looks and sounds and feels every bit the world-class supercar that it is. Incredibly capable, with limits you’ll never come close to finding on public roads, while it has the ability to be completely calm and collected on the commute home. Although it essentially has the same heart as the ‘Standard’ Huracán, it is much more than just a quicker, more expensive version of itself. It is a remarkable car, and an unforgettable driving experience all its own.