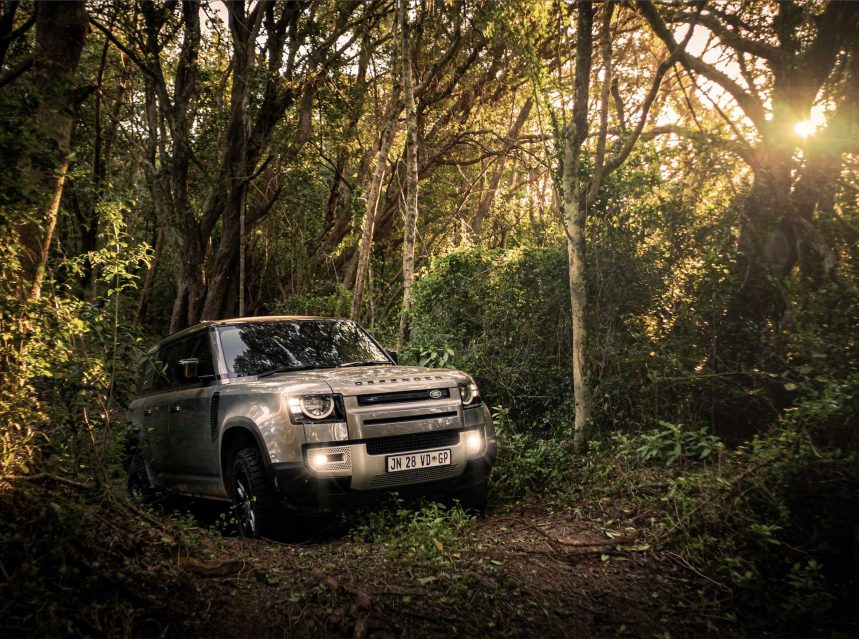 Seventy years ago – in August 1950 – the first Land Rover Series I was assembled locally. To commemorate this milestone, we traced the production path of local Land Rovers, including the original Defender, with a new highly accessorised Defender 110 P400 S.

The first Land Rover Series I landed in South Africa in 1949, only a year after it was officially introduced in Europe, and it took only another year before the first locally assembled Series I rolled off the production line of the Car Distributor Assembly (CDA) plant in the Eastern Cape.

Now, according to most sources this vehicle was constructed in Port Elizabeth, but this does not make sense, as the CDA plant was opened in East London in 1948 to assemble Nash, Prince and Miller cars. As CDA did not have any facilities in Port Elizabeth, it follows that the first local Land Rover was in actual fact built in East London, and not PE.

CDA produced Series Land Rovers from 1950 to around 1956 when local assembly was moved to the BMC Rover plant in Port Elizabeth. By 1963, this facility, in line with local content requirements, was making Land Rover chassis and petrol tanks from South African steel.

With the acquisition of Rover/Land Rover by Leyland and the subsequent merger with BMH (British Motor Holdings) in 1968 to form British Leyland, production moved to Cape Town. It continued there until 1987. By 1972, Land Rover local content had reached 44% in vehicle weight and in1982 the Leyland plant was recognised as the largest Land Rover assembly plant outside of the United Kingdom.

Thus, in order to celebrate the assembly of the first Land Rover model in South Africa (most probably a mid-Series I 80” model) we decided to undertake a journey from Buffalo City to Cape Town in the recently introduced new Defender. 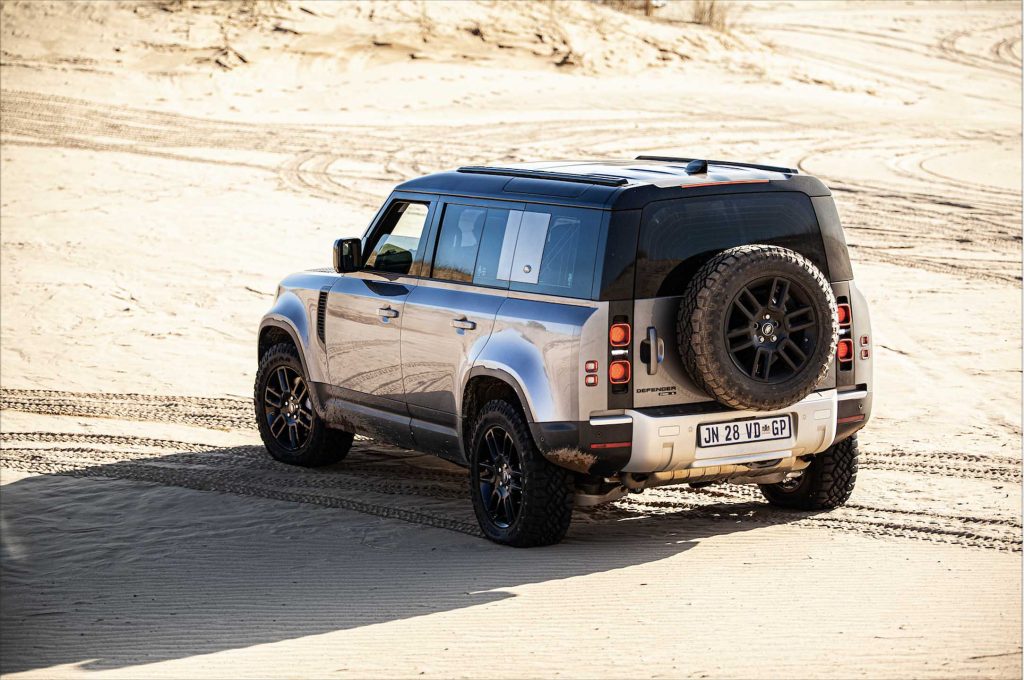 Inside the already plush cabin, extras – such as 12-way semi-powered front seats, third row seats, three-zone climate control with rear cooling, configurable Terrain Response 2 – and an array of driver aid systems, as well as an Electronic Active Differential, added another R40,600 to the total price.

The accessories, totalling R74,400 over the cost price, also included some cool items, such as air quality sensors and cabin air ionisation, Keyless Entry and the ClearSight interior rear-view mirror – an indispensable piece of kit to have a clear view past the rear-mounted spare wheel. The Urban Pack brightwork added bright metal pedals in the interior, scuff plates, a spare wheel cover and a front undershield, and all this – plus the outsize Goodyear Wrangler all-terrain tyres – gave the Defender a stylish look but with a militant stance.

Land Rover’s flagship 110 model’s no-nonsense attitude was further strengthened by the soft growl of its new 3-litre straight six-cylinder engine (the first Land Rover model with this powerplant in the country) featuring mild hybrid electric technology, delivering a wholesome 294 kW of power and 550 Nm of torque.

Leaving from the East London JLR agents Eastern Cape Motors (the company that evolved from the erstwhile Manning Motors, one of the first Land Rover dealerships in South Africa in 1951) we chose the twisty coastal route towards Port Elizabeth.

It was soon clear the P400 possessed ample power (Land Rover claims a 0-100 km/h sprint time of 6.1 seconds and a limited top speed of 191 km/h) but the assistance from the hybrid system was never really evident. With its self-levelling air suspension and bespoke underpinnings, the Defender was quite nimble in the corners – despite its weight – and a consummate
companion on the highway. 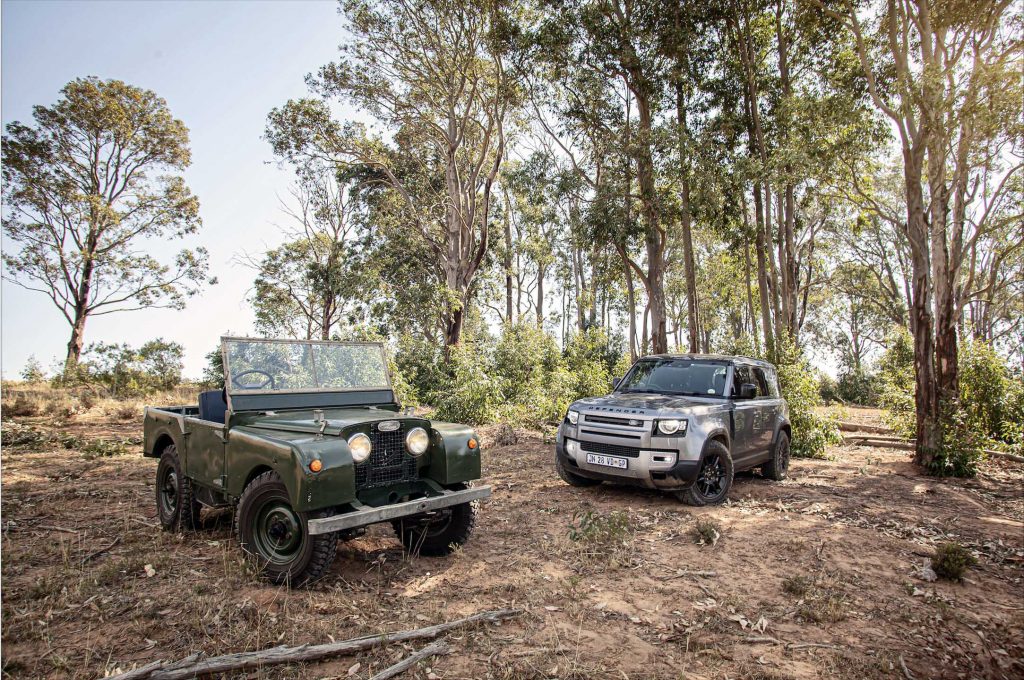 Close to Paterson we turned off to Schotia Safari Private Game Reserve, one of the oldest reserves in the Eastern Cape, owned, managed and run by the Bean family. Here we met Peter and Justin Bean and their trusty, immaculately maintained 1953 Series I 80” Landy.

It was interesting to see how much the Defender has grown in gait compared to the original with its small 2-litre engine delivering a measly 39 kW at 4,000 rpm and 137 Nm of torque at 1,500 rpm. Still, the iconic little bush whacker with its huge steering wheel (something we disliked in the new Defender) drove wherever it was needed for our exciting photoshoot.

From Schotia we skirted Port Elizabeth on the N2 and made our way towards St Francis Bay to our next destination, Brakkeduine 4×4 Trail close to Oyster Bay, to give the new Defender a proper four-wheel drive workout. Here we were met by Johan Lindstrom, a man with many years of 4×4 experience, and he took us out on the challenging sand dune route. 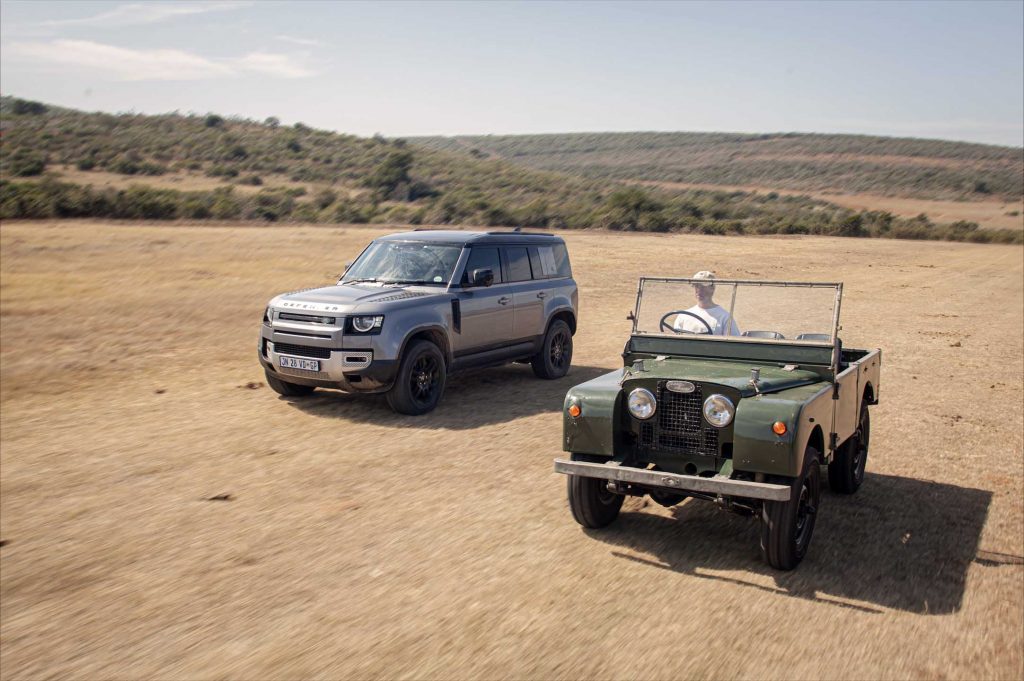 Even while quite big and heavy the Defender’s combination of advanced Terrain Response system, powerful engine, fast-reacting transmission and favourable overhang angles made short work of the tricky dunes and deep sand. The grip of the specially developed Goodyear tyres was surprising, and even Johan was impressed with the capabilities of the Solihull newcomer.

From there we quickly made our way through Knysna, George and Mossel Bay on the Garden Route and – securely ensconced in the roomy, quiet and dust-free cabin – we rounded off our tour to Cape Town on the dusty dirt roads of the Overberg District.

With the demise of Leyland, and BMW taking ownership of the Rover Group, production of Land Rover (now called Defender) moved to a new plant in Rosslyn, Pretoria, which was inaugurated in January 1995. This continued until 2000 when BMW sold the marque to Ford.

Assembly then moved to Silverton and final Defender production included a 5.3 m-long 11-seat variant with three sets of side doors before it was discontinued in 2002, and all models were imported until worldwide production seized in 2016.

So, can the new, completely modernised Defender fill the big tyre tracks of its predecessor? Well, yes and no. While utterly capable off-road, it will probably not satisfy the needs of traditional overlanders and adventurers but it will appeal to those (mainly Discovery owners) wanting something styled more “old-school”. Oh, and its price (starting from R1,050,100 for the 110 derivatives, and our test model with extras selling for R1,425,221) can be prohibitive.