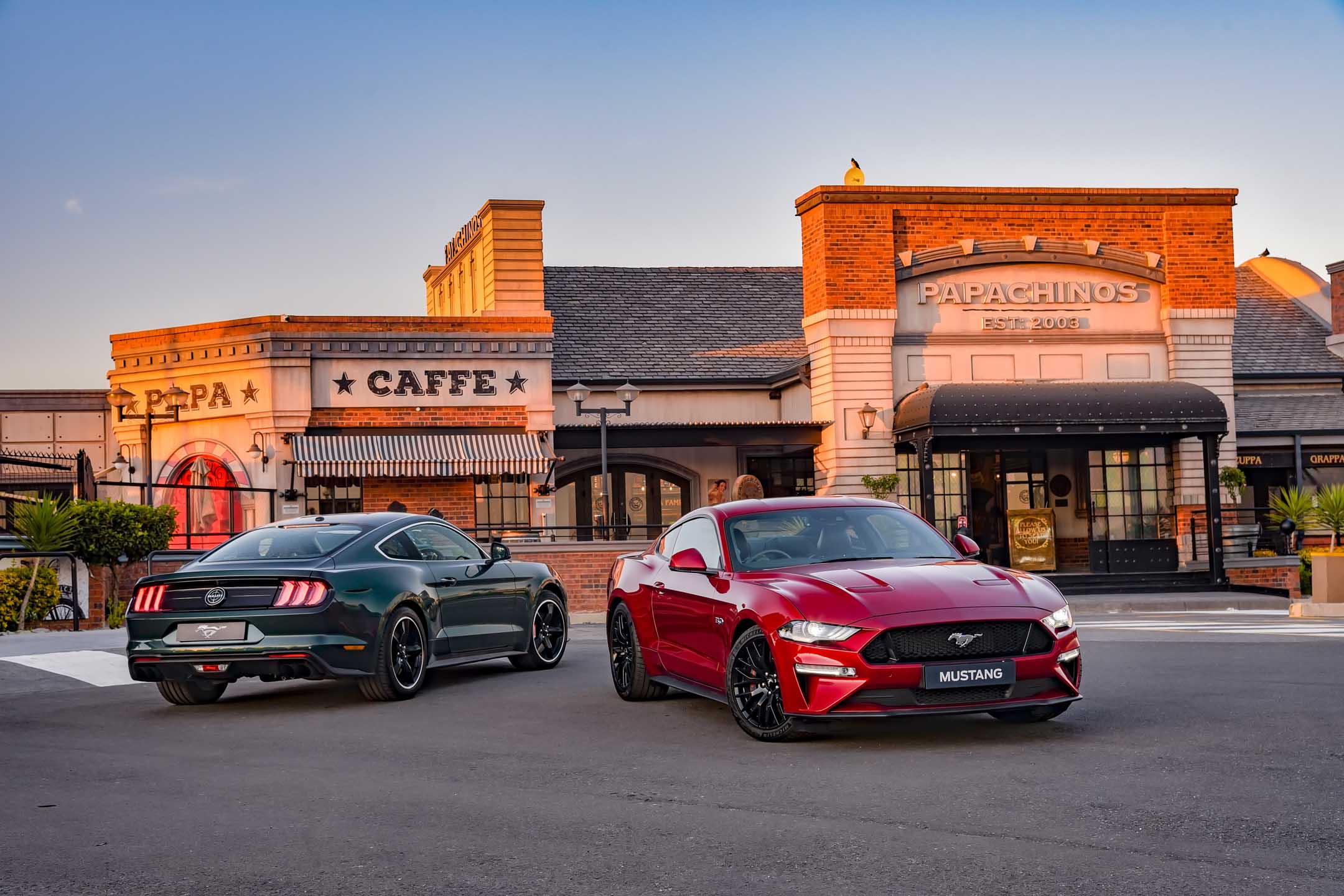 Since the launch of the current Ford Mustang in 2016, it has received quite a warm reception from the market with scores of buyers snapping them up with aplomb. The iconic nameplate continues to be a popular proposition among those looking for a sports coupe that is distinct in its design language all the while delivering handsomely on the performance front without sacrificing on technology. This, of course, culminates in a package that continues to retail below the R1m mark here in Mzansi, giving it universal appeal for all intents and purposes.

Three years in and the model has been given a nip-and-tuck, not that the design was getting long in the tooth, quite the contrary in fact, but rather that incremental improvements are equally welcomed undertakings. From the sharper headlights to the spruced-up cabin, replete with the latest SYNC 3 infotainment touchscreen, while both engine derivatives offer more poke than before.

TELL ME MORE ABOUT THE CHANGES? 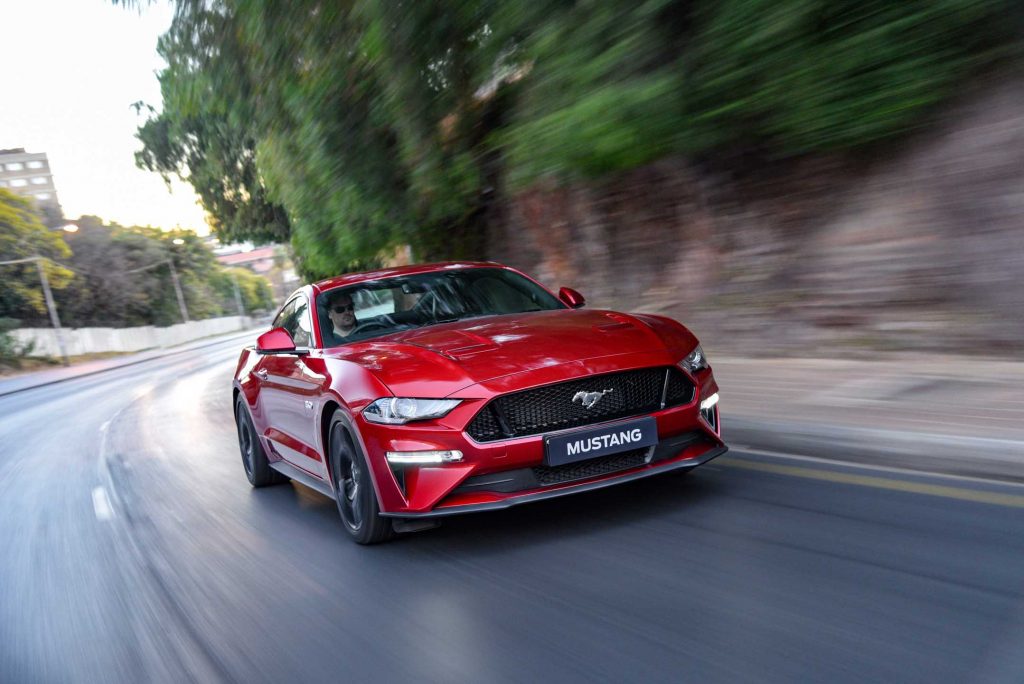 What has been significantly improved is the engines that are now paired with a new 10-speed automatic gearbox, found in other Ford products. It is a smooth and responsive gearbox for the most part and contributes favourably to the overall efficiency of the engine, thanks to working in conjunction with various Drive Modes to ensure optimal operation at any speed. There is also an alphabet soup of safety items including Lane Keep Assist and Rear Traffic Alert among others.

WHAT ABOUT ENGINE DERIVATIVES?

As was the case with pre-facelift models, the updated version comes with both the 2.3-litre, four-cylinder Ecoboost engine that still pushes out 233 kW and 441 Nm (up 11 Nm from the previous model) and the 5.0-litre V8 with 331 kW (22 kW up from the outgoing model) and 549 Nm. Right off the bat, I must mention that EcoBoost variant is the least of my favourite of the two engine derivatives.
Yes, it has great poke and efficiency, but it detracts from the essence of what a Mustang represents and that is a roaring sound of the engine to go with those distinct looks. Thankfully, the 5.0-litre V8 is the one you should be buying, actually and this latest one is even more deliciously raucous sounding, thanks to a reworked exhaust system that now has quad pipes.
Put your foot down at any point, whether it be standstill or while on the move, and the V8 engine up front bellows with an addictive roar that has an old-school, bass-layered note that will have the hairs on your arms stand on end.

WHAT DOES THIS TRANSLATE TO? 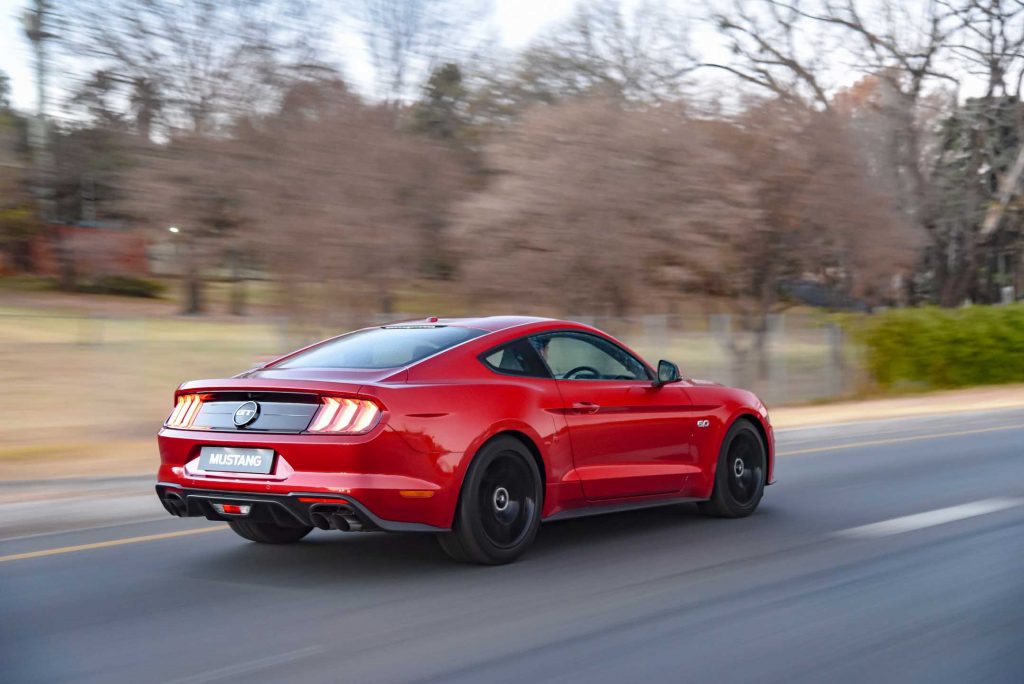 The Mustang might not have the sharpest chassis in the business, but it is anything but blunt or placid, as it manages to change direction quickly when pointed towards a corner’s apex point. Steering feedback could be a bit more communicative, though, but hustling a V8 Mustang has its rewards – a broad smile on the driver’s face being one of them.
Driving on some of the barren roads of the Western Cape at the model’s launch, I can attest that the vehicle feels relatively planted to the tarmac and you can easily push the performance envelope to your heart’s content without feeling as though you’re riding an uncontrollably wild horse – Uhm, ok, I see what I did there – and hanging on for dear life.
You still get two rooftop variants – the hardtop and the convertible – and both can be had with either engine. And, yes, the Mustang still commands a great deal of appreciation from motorists and bystanders alike, something I have personally not experienced in some models costing double the Mustang’s price that alone speaks huge volumes of the Mustang’s iconic status.

Commemorating 50 years of the Mustang nameplate, Ford has also released a limited version dubbed Bullit – named after the classic Bullit flick of the 60s – and only 50 models will be coming to SA. It comes exclusively with a 5.0-litre V8 engine and six-speed manual and a lick of green paint. It is a model that will appeal to the enthusiastic driver as it immerses you in the driving experience that an automatic gearbox just cannot fathom. Thanks to its short throw, it is a very dexterous transmission that slots into each cog with a reassuring and sturdy feel. In an era where modern V8 engines are exclusively paired to an automatic gearbox, this Bullit version is a breath of fresh air and the Mustang to have if you can snap one up. Trust me, it is really that rewarding to drive!

The popularity of the Ford Mustang will continue unabated and this updated version simply adds more value to the cocktail mix than before. At the price, it also presents exceptional value for money with a long list of standard equipment. If I could level any criticism, it would be some of the plastics utilised in the cabin, which have a similar tactile feel to models much lower in the Ford pricing hierarchy. Other than that, you would be hard-pressed to find a vehicle with this much street cred and steeped in history such as the Ford Mustang. Are you suffering from a mid-life crisis? The Ford Mustang is your remedy, just do yourself a favour and go straight for the V8 and thank me later.