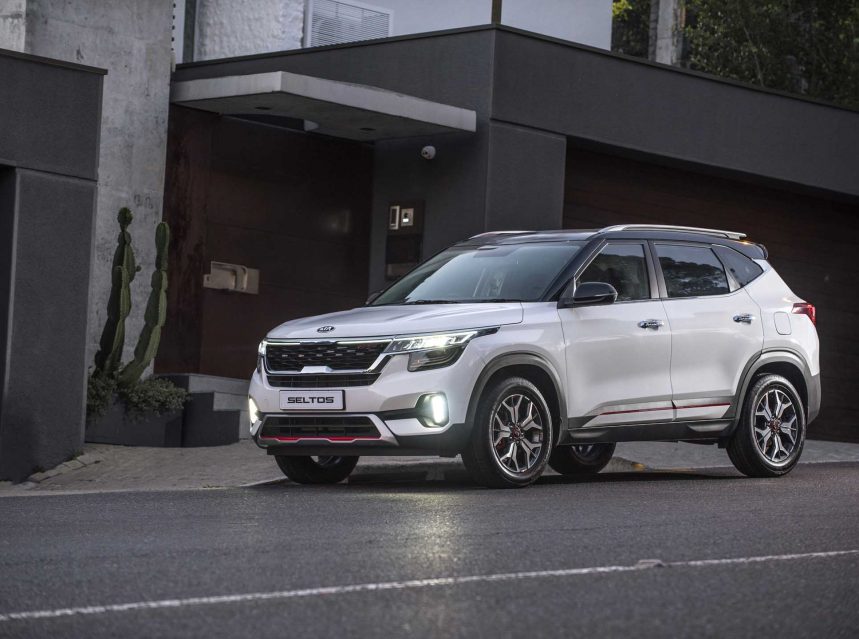 There’s a myth that the indomitable ‘bakkie’ rules the roost when it comes to new car sales every month. And that used to be the case. We are, however, living in times where what the neighbour drives is irrelevant, and value is the determining factor responsible for the signature on the dotted line.

Not convinced? The ever-wise men that spend their days analysing figures on spreadsheet documents projected something along these lines and called it a “buy-down trend”. The result is that buyers are more focussed on stretching their Rands in the spirit of value.

Instead of buying that rear-diff-and-4×4-as-standard bakkie for the off chance of an annual off-road excursion, they are instead looking at stowage space and fuel consumption as opposed to engine size and break-over angles.

Buyers are looking at cars like the Kia Seltos, which, at the time of writing, already recorded 320 sales in January. In the spirit of figures, that accounts for just under 5% of recorded sales in the crossover and small SUV segment (6,936), while the former SA favourite, the ladder-frame pick-up, logged just shy of 6,900. That’s considering a large portion of the latter is single-cab business acquisitions. 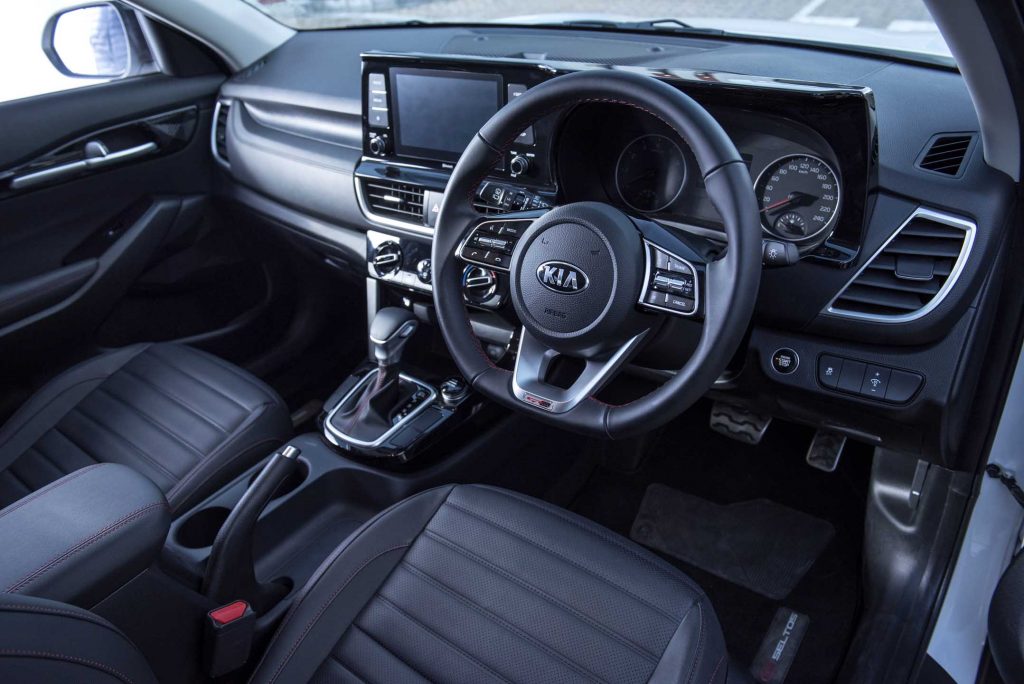 So, we’ve established that the Seltos is a relatively popular proposition if the above sales figures are anything to go by. At the model’s recent launch, I had the opportunity to sample both the mid-range EX+ and the range-topping GT Line variants and can say with certainty that in terms of the cabin quality and feel, the Kia is a cut above its competitors, which we’ll get to in a bit.

Both the EX+ and GT Line models feature artificial leather seats, while the entry-level EX makes do with cloth seats. A chunky flat-bottom steering wheel serves as the connection between the driver and the car, while some familiar components, like the instrument cluster that has been lifted wholesale from its bigger Sportage sibling, is also present. Most importantly, though, that inherent build quality and overall roominess that I’ve come to love from Kia is still very much the mantra of execution for the brand.

If, though, there’s a single interior element I couldn’t really care for, it’s the central styling panel that surrounds the instrument cluster and 8” infotainment system. From what I could tell, it isn’t really performing a workable purpose other than mimicking the ‘trendy’ and sharp edges we’ve seen premium manufacturers execute of late.

In terms of features and functionality, it’s a bit of a mixed batch. On the plus side, you don’t have to tick any expensive boxes to get nice-to-haves. All derivatives come standard with that 8″ infotainment system, cruise control, steering wheel controls and Bluetooth functionality. Navigation, however, isn’t available at any price reach of the Seltos range. 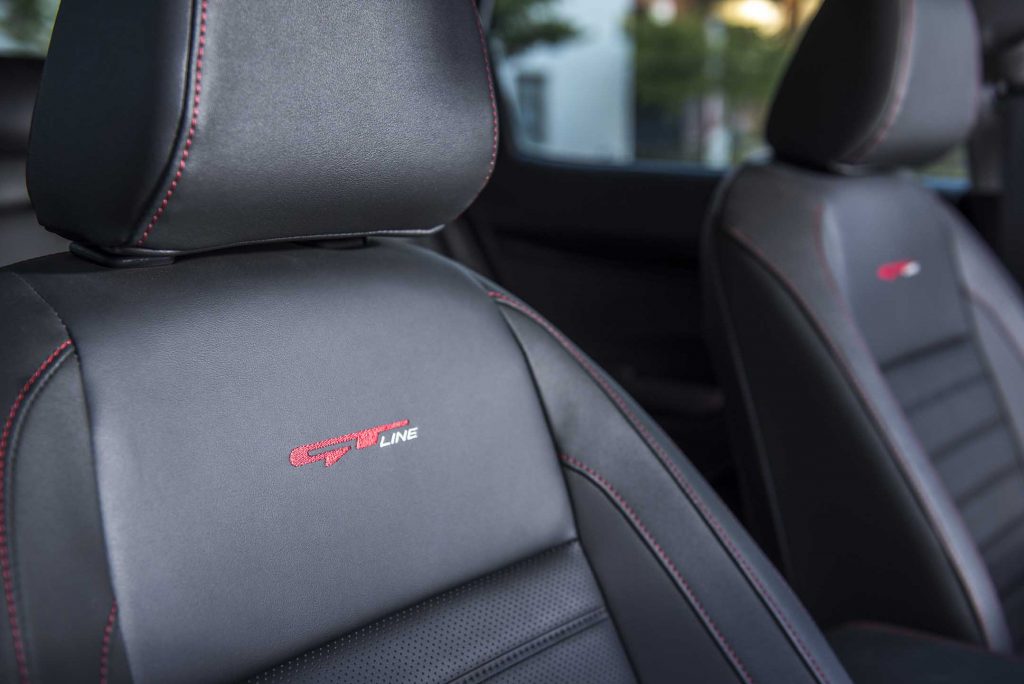 The Seltos is, for now, available with only two engine options. Both the EX and EX+ finds motivation from a 1.6 naturally aspirated engine that is good for 90 kW and 151 Nm. The GT Line, on the other hand, is powered by a 1.4-litre turbocharged engine that produces 103 kW and a meaty 242 Nm of twist.

And gearboxes? This is where it gets erm… interesting. The entry-level EX is available with both a 6-speed manual and automatic gearbox, while the mid-range EX+ can only be had with the auto. The sporty GT Line is equipped with a gem of a 7-speed dual-clutch shifter.

As for how all these mechanicals transfer to the road, it’s fair to say that not everything is quite peachy. While we didn’t get to drive the manual EX, I’m willing to bet that, if I had to fork out the money, I would gladly sacrifice the comfy leather seats and instead drive away with a manual Seltos. The reason is simple: the 1.6-litre engine just doesn’t have the torques to allow the automatic gearbox a smooth power-to-wheel conversion process.

As a result, the gearbox relentlessly clung to a chosen gear to maximise the available power to such an extent that, on several occasions, it blatantly refused to gear up. This resulted not only in intrusive noise and frustration, but also considerably high fuel consumption figures – hovering over the 8-litres per 100km mark.

In stark contrast to this, the GT Line with its turbocharged engine and dual-clutch combination felt considerably more responsive than what the figures would suggest with smooth up- and downshifts and, while naturally still present, turbo lag remained minimal. It’s a crowded segment where Kia has taken its aim with competition that ranges from different body styles and sizes, to vastly different engine options. The fact of the matter remains, though, that part of the value is pricing and when it comes to an alternative for the same calibre of money, Kia’s biggest sales competitor is the popular VW T-Cross that starts at R10,000 less than the EX manual Seltos.

In the same breath, the T-Cross is also slightly smaller and that translates into better overall interior space for the Kia, and the cabin I might add feels a cut above that of the VW. On the flip side, the German offering has a 1.0-litre turbocharged engine that works in tandem with a 7-speed dual-clutch gearbox, but it also doesn’t have a lot of the standard niceties that the Kia boasts. So, the buying decision really comes down to what you prioritise.

I didn’t nearly get to mention all the different elements there are to the Seltos, like the striking exterior that has so many layers of design to it that it can be quite mesmerising. Or the red brake callipers you’ll find on the GT Line.

And speaking of the GT Line, that would be my choice if my money did the talking. But, if petrol doesn’t strike a chord with you, Kia is looking to launch a diesel derivative later this year. And if there’s one thing I’ve learned, is that Kia’s diesel offerings are excellent. I reckon that would be the Seltos to have.