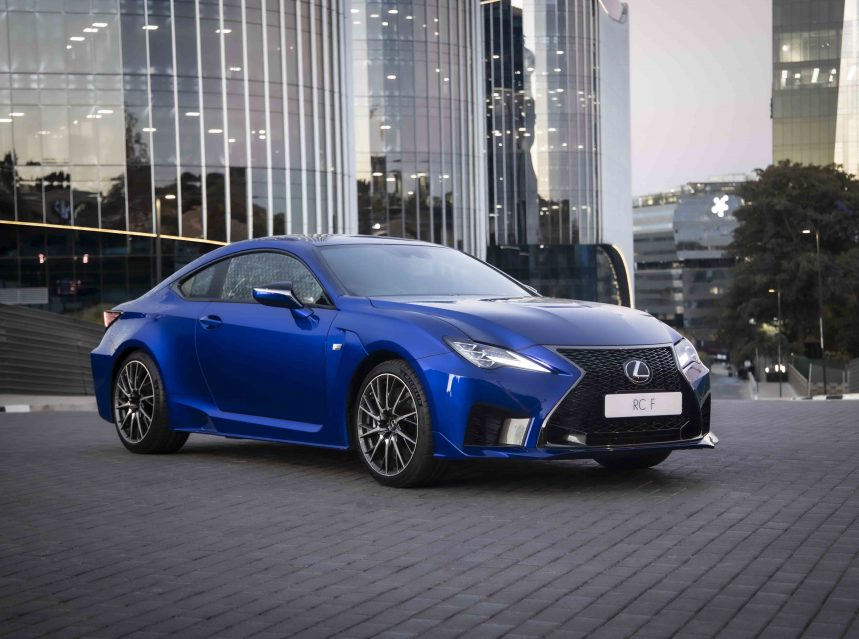 So far, 2019 has been quite the sporty year for Lexus in South Africa. The first official new vehicle launch Driven attended for the year, was the newly refreshed RC 350 F. Now, Lexus introduces its flagship sports coupé and its lightweight, more focussed, track-destined sibling dubbed the Track Edition.

It’s 11 am on what should have been a frosty, mid-winter, Monday morning on the Highveld. But instead of being at the Driven offices, I jetted off to the KwaZulu-Natal south coast to sample something special from the experts in Japanese luxury, Lexus.
Except that, at least this time around, we’re not at the coast to sample some sumptuous luxo-saloon or premium SUV, but rather to unleash the updated RC-F coupé on the Zulu Kingdom’s rural roads. Oh, and to attack the highly technical Dezzi raceway with its lightweight fettled sibling that, says Lexus, is purpose-made for track driving.
Yes, you read that correctly. A Lexus for the racetrack that is ubiquitously named the ‘Track Edition’.

STYLED FOR GETTING DOWN 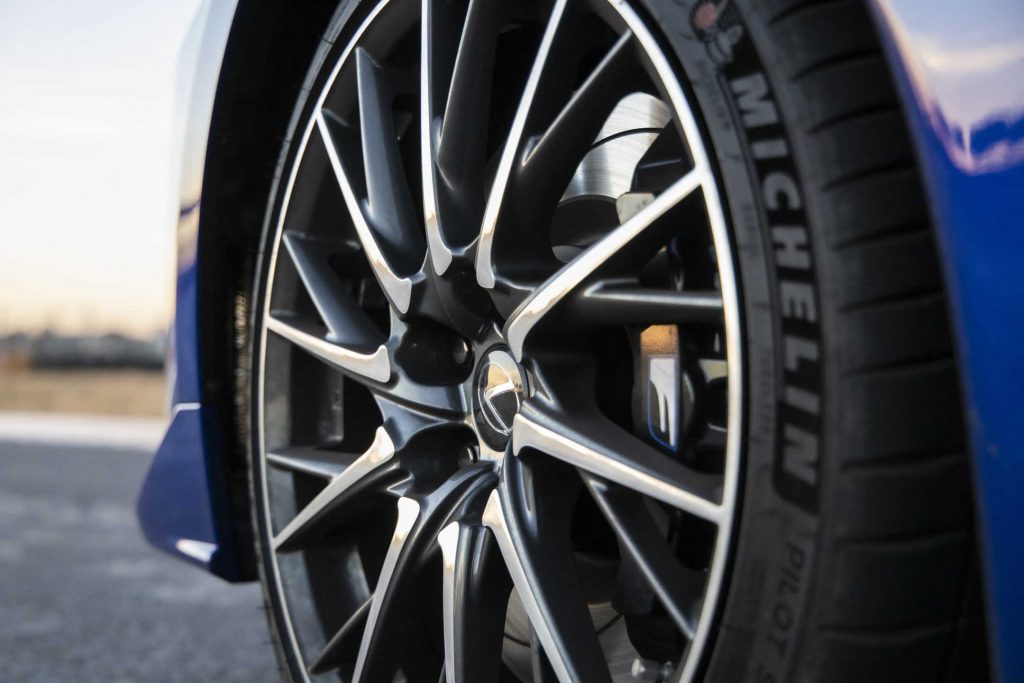 With the new RC F, Lexus has applied some of the aerodynamic tricks it learnt from its RC F GT500 and RC F GT3 race cars, with the singular purpose of reducing the RC F’s lift and managing airflow more efficiently around the vehicle. The point, naturally, is to improve dynamic stability and reduce drag, with the added benefit of also refining the coupes’ appearance.
Some aero-enhancing changes to the standard RC F include a revised canard shape on the front bumper spoiler corners that increase the amount of vortex generated by the canards, creating more front-end downforce and a more planted feel than its predecessor.
Becarboned as it is, the RC F Track Edition is an imposing beast in the flesh, and weighs in at an impressive 80 kg lighter than the RC F, which itself has shed a couple of pounds from the last time we met. This was achieved by employing a variety of weight-saving measures, including tweaked suspension components, hollow half-shafts, and a lightened intake manifold.
Standard carbon-ceramic brakes on the Track Edition also contribute to its claimed man-size weight cut, as do an additional carbon-fibre reinforced plastic (CFRP) front spoiler, and a bonnet, roof, and fixed rear spoiler all made from the same super-light but super-strong stuff. There is also a set of achingly beautiful dark matt finish 10-spoke forged alloy wheels to complete the main exterior overhaul over the road car. 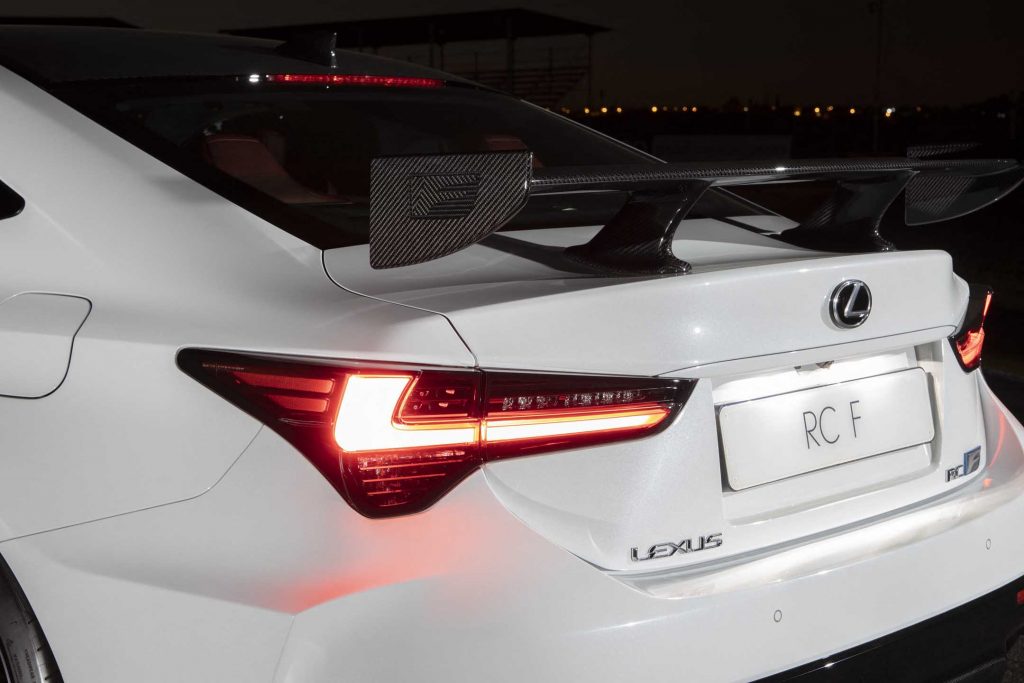 While the RC F and the RC F Track Edition absolutely look like they belong on a fashion runway (rather than on Dezzi’s unforgiving ribbons that were once an actual runway), both cars impressed with their ability to stay composed when pushed hard, without losing the composure that one expects from a Japanese luxury coupé. And rest assured, there is still plenty of Lexus in both models, despite their fire-breathing attitude.
Although powered by the same 5.0-litre V8 naturally aspirated engine with its 351 kW of power and 530 Nm of torque, the Track Edition should, given its weight advantage perform considerably better in a straight line than the standard car. Surprisingly, though, it manages a meagre 0.2-second improvement over the RC F, which itself dashes to the 100 km/h mark in 4.5 seconds. I don’t know about you, but in my mind, I have to ask myself whether the near R780,000 premium can be fully justified? 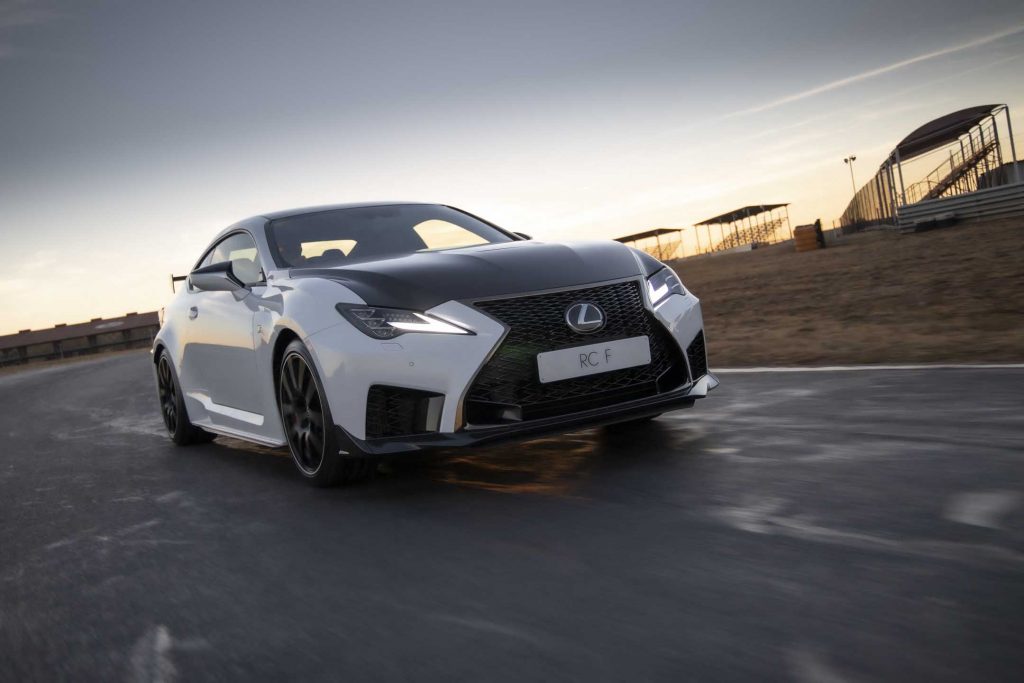 To answer that question you’d have to let the RC F and RC F Track edition trash it out on the blacktop, as we did at Dezzy raceway.
The RC F retains the best of the RC 350 F-Sport’s on-road attributes that we loved back in February – a smooth-as-silk V8, impeccable road manners, and Grand Tourer ride quality – and cannot be beaten in this category in our opinion. Cruising at the national maximum speed, the RC F will idle under 2,000 r/min and return respectable fuel consumption numbers in the low nines. As we did not have the opportunity to test the Track Edition on the open road, we will rely on Lexus’ fuel estimate of 11.2-litres/100 km, although you could probably expect to see better numbers if you manage to keep your right foot off the enticing loud pedal long enough. Top speed for both cars is pegged at 270 km/h.
The same Aisin eight-speed automatic gearbox as the previous RC F directs torque to the rear axle, where, in the Track Edition, it is sent to the tarmac via an aggressively tuned Torsen limited-slip differential. The RC F is fitted available with an optional torque-vectoring differential, but I preferred the directness of the gear-type differential in the Track Edition. We drove the standard RC F equipped with the torque-vectoring differential on the track, and its corner-exit personality was far more benign – which is expected from a car that needs to ferry passengers in utmost comfort.
It did strike me as odd, however, that both the RC F and Track Edition are shod with the same Michelin Pilot Sport 4S tyres – 255/35R-19s at the front and 275/35R-19s at the rear. It shouldn’t be that a track car uses the same tyres as its less performance-oriented sibling, but Toyota points out that the Track Edition must retain some of its Lexus comforts, and that slicker tyres would affect this. The Michelins performed admirably on the track though, on both cars.

Comparatively, the Lexus plays in a niche segment of the market where the German coupés reign supreme. The jury is still out on whether an M4 Competition enthusiast, for example, will consider swapping his Teutonic rocket for a luxurious Japanese one, my guess is they won’t. But the RC F certainly doesn’t want for anything against its rivals, and add to that the exclusivity factor and jaw-dropping good looks, I reckon they have a winner.