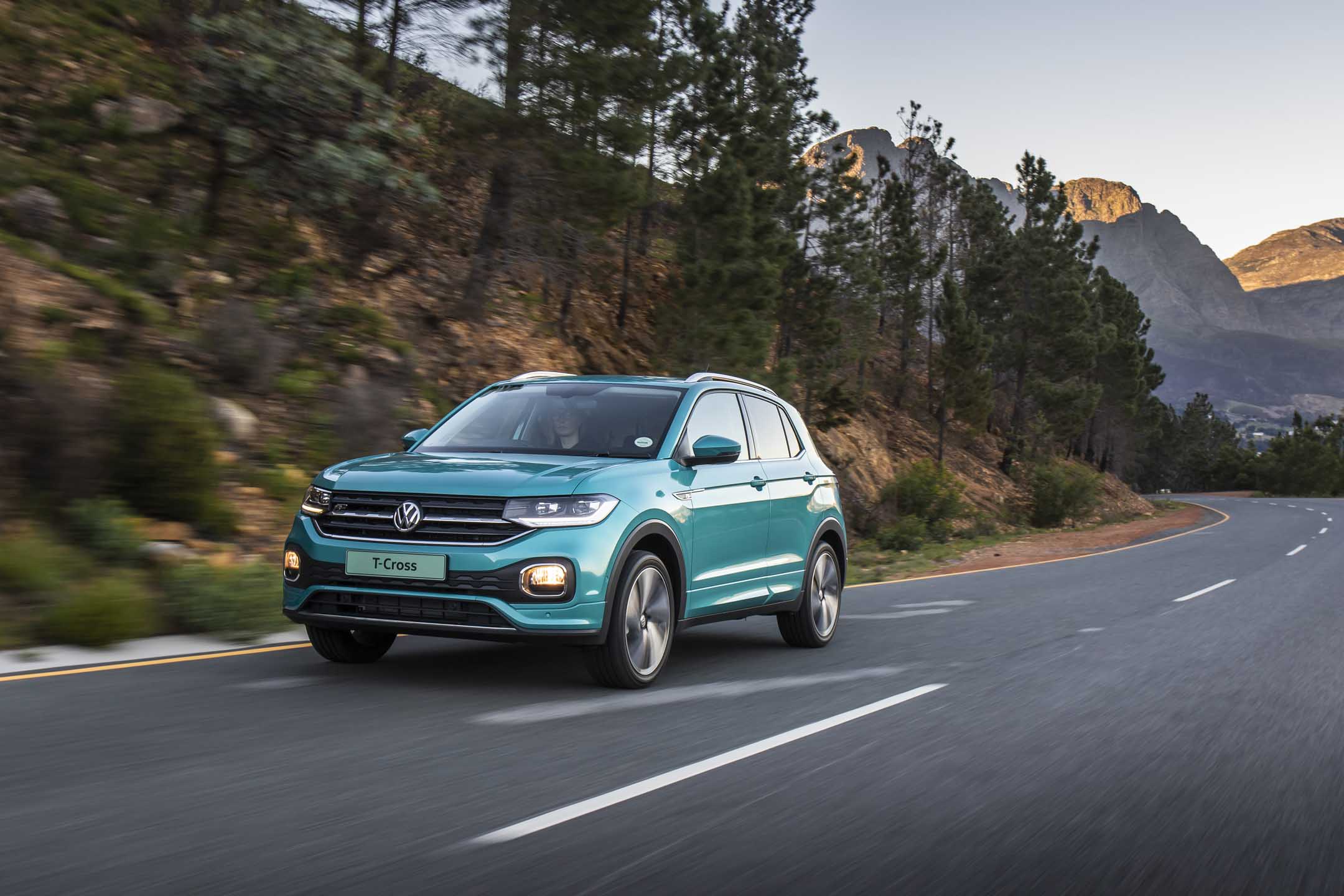 Volkswagen’s foray into the B-segment crossover market with the T-Cross has been a long time coming. With many a manufacturer already boasting their own advocate of sorts in this space, the arrival of the T-Cross is quite the pertinent one for the Wolfsburg manufacturer as it casts its net wider to net a new buying audience. Lerato Matebese recently travelled to the Eastern Cape to sample Veedub’s newest T SUV family. It follows on the footsteps of the Touareg and Tiguan and the imminent T-Roc, which itself slots below the Tiguan and above the T-Cross and is based on the Golf’s MQB platform.

It is perhaps not a major surprise to learn that the smallest member of the SUV family, the T-Cross, is underpinned by the Polo’s building blocks. This means that it also shares most ancillaries, including engine and drivetrain with the popular compact hatchback, the oily bits of which we will discuss a bit later. For now, however, let us touch on what the T-Cross represents for the company in general and the market.

Measuring 4.11 m in length, the T-Cross is a sizeable car that translates to a decidedly roomy cabin, particularly in the rear quarters where legroom is notably generous for a vehicle in this segment. Assembled in Spain, among other factory sites, it is forecast that those markets’ crossover offerings will have doubled in a decade, which is indicative of the insatiable appetite for these segment cars.

Design-wise, the T-Cross takes cues from many of its sibling offerings, although with a more youthful pizzazz and disposition that is underpinned by some rather vivid exterior hues, including Energetic Orange, which is but one of the nine colours on offer.

There are also five alloy wheel options available to specify, however, the orange-tinged wheel I reckon is a tad garish and a simple gloss black finish would have better sufficed. That said, there is a great deal going for the T-Cross, not the least of which is the boot space that can be increased, in standard format, to a generous 455 litres with the rear seat bench moved forward on its rails or 377 litres with them moved all the way back that incidentally also increases rear legroom space.

Of course, you can further increase the luggage space to an even more commodious 1,281 litre by folding down the rearmost seats. So, then, from a practicality perspective, the T-Cross seems to have most basis well and truly covered.

WHAT HEART BEATS UNDER THE BONNET?

Much like its Polo sibling, the T-Cross comes powered by a 1.0-litre, three-pot turbo engine that pushes out 85 kW and 200 Nm and paired with the seven-speed dual-clutch gearbox. For those with a penchant for more power, there will be a 1.5-litre, four-cylinder turbo engine making 110 kW and 250 Nm offered in the first quarter of 2020 and will be priced at R403,500. There will also be a base Trendline model putting out 70 kW and allied to a five-speed manual coming in under the R300,000 mark and will be offered in 2020.

There are currently two specification grades offered from launch; the Comfortline and Highline, the latter kitted out with the distinct R-Line package that includes 18″ alloy wheels and sportier front seats among others. It also comes with the upgraded infotainment system, replete with smartphone screen mirroring and an inductive wireless charging pad.

Being front-wheel-drive only, power delivery feels similar to that of its Polo sibling and, while the engine does feel slightly lacklustre from pull away, it does manage to pull with much conviction once on the move and it’s on the open road where it truly begins to shine.

The engine runs surprisingly smooth at the national speed limit with very little of that three-potter-thrum filtering into the cabin. There is also little in the way of wind noise – pointing to a relatively well-insulated passenger quarter, while build quality feels sturdy for the most part, although there are some hard-wearing plastics used on some touchpoint surfaces.

The rest of the vehicle is pretty much what one would expect from a Volkswagen product – fuss-free, user-friendly and functional.

Scything through some of the Eastern Cape roads, including the winding Nature’s Valley Conservation blacktop that is good for testing a vehicle’s tarmac-embracing talents or lack thereof, the T-Cross managed to remain neutral, tracking true to the chosen line, but even more impressive is how it manages to dampen road bumps from shell-shocking passengers with aplomb.

Volkswagen might come late to the compact crossover party, but in its defence, it has a great product in the T-Cross. It will no doubt net it a fair share of customers looking for a no-frills, modern crossover with a suite of convenience and safety equipment, not to mention the practicality quotient that seems to allude most vehicles playing in this space.