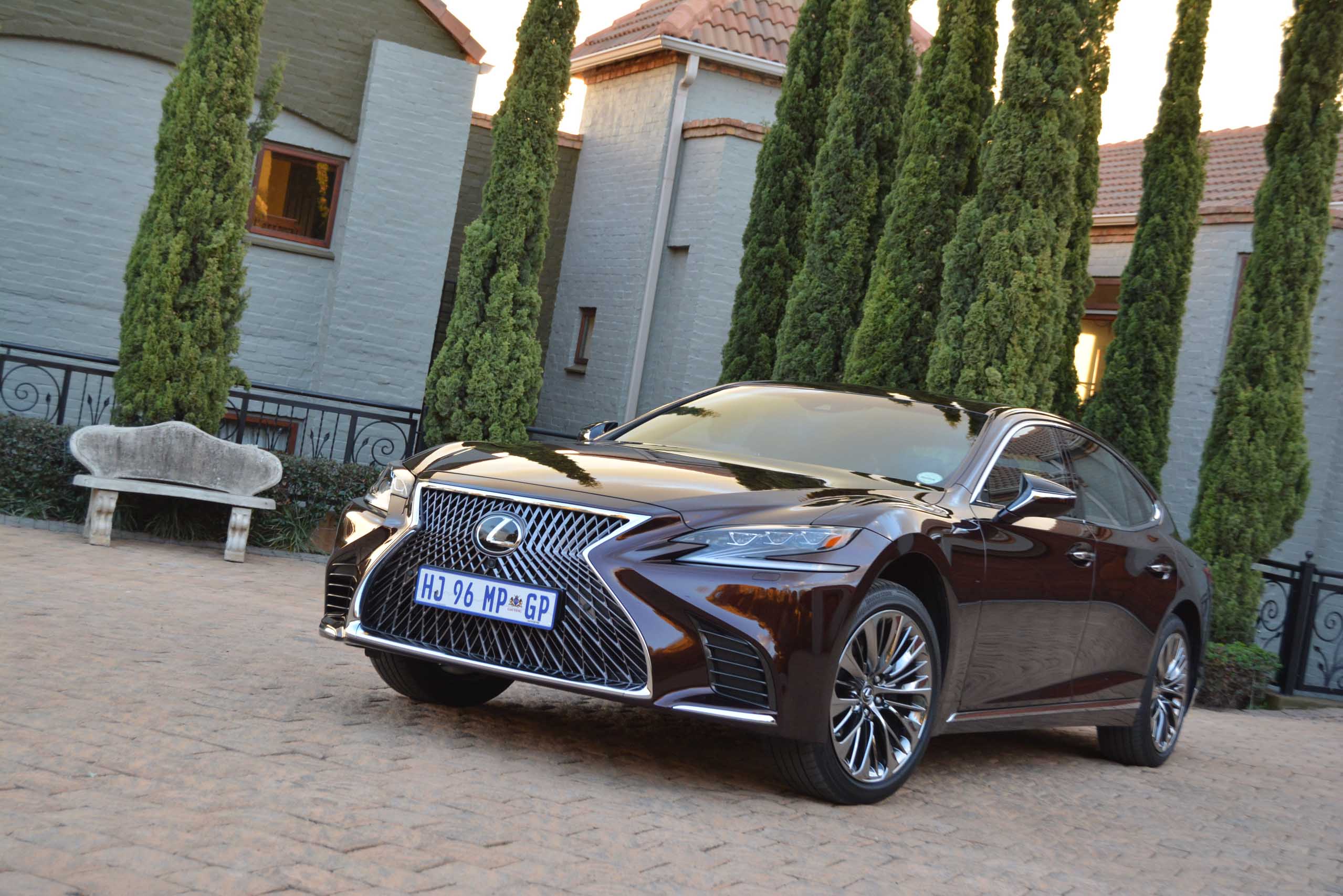 ”Eish,”, the carwash attendant exclaimed, clutching his head as we drove up to the wash and dry area with the Lexus LS 500. “You must be from the States,” he said matter-of-factly to DEON VAN DER WALT. “No,” he replied, informing the awestruck attendant that he is actually from Centurion. This caused the man at the carwash to look slightly confused, asking again; “In the States?”

Driving an M1 Abrams Military tank on South African roads can’t possibly draw more attention than this Lexus. Motorists would actively stop driving to gawk at this brownish-plum coloured luxury sedan. They would slow down and speed up and slow down yet again, in an effort to view it from different angles, and this, we thought, has something to do with the dramatic styling of the LS 500. 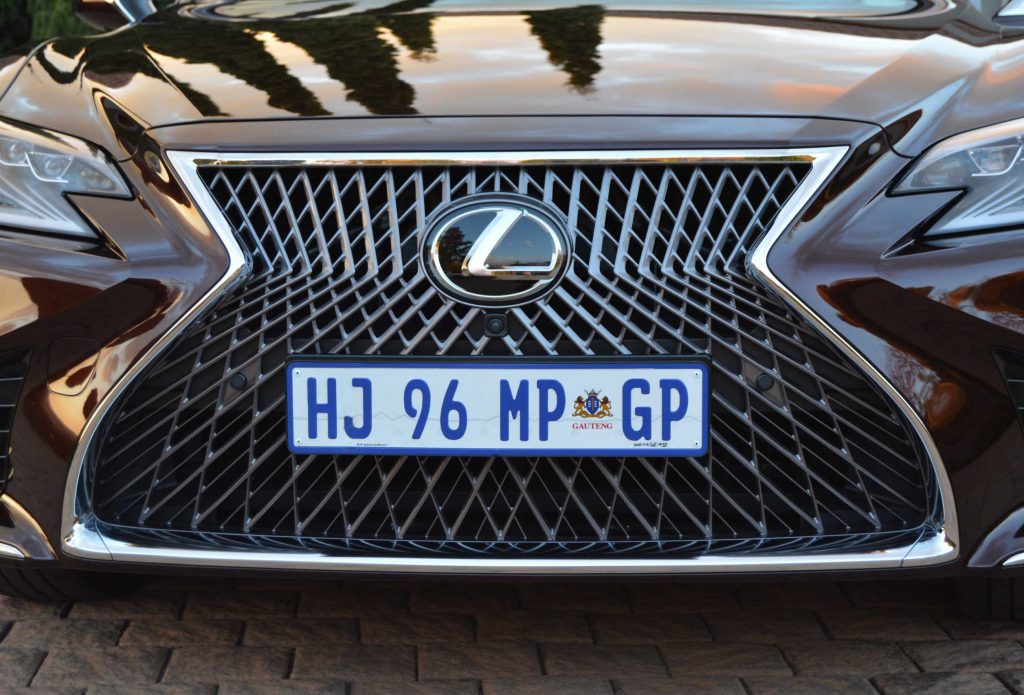 Comparing the LS to its Bavarian luxury sedan rivals that come in the form of the Mercedes-Benz S-Class and BMW 7 Series, you get the idea of what the designers intended sitting behind their easels. With both the Germans, we are pretty sure the design brief read; ‘functional luxury’.

Don’t get me wrong, both the Germans are mighty attractive, but in a conventional and functional sort of way. Looking at them you know that something as trivial as the belt-line has that specific angle to reduce the drag-coefficient by 0.016%, while it also serves to ultimately increase the comfort levels of the rear armrest.
And the Lexus? Well, it’s like origami. The basic rules are present to make it work as a luxury sedan, but the rest is open to design impulse.

Take the headlights for instance; it looks like they were placed, and then folded some, creased around the edges and then set again. Right up to a point, we’d argue, where even the stylists thought they might have overdesigned it. But, somehow, it just works. It’s a piece of art.

It’s much the same with the now Lexus-signature hourglass grille. It is huge. And prominent. Just stare at it for a while, and you’re guaranteed to be mesmerised by the finer details of the 3D-look grille. It is intensely captivating.

Then there are those blingy 20″ wheels. Sure, it might add a dose of glamour to an already impressive design package, but for us, it just about pushed the scales of OTT into the red with the entirety of the environment reflected on the surface. 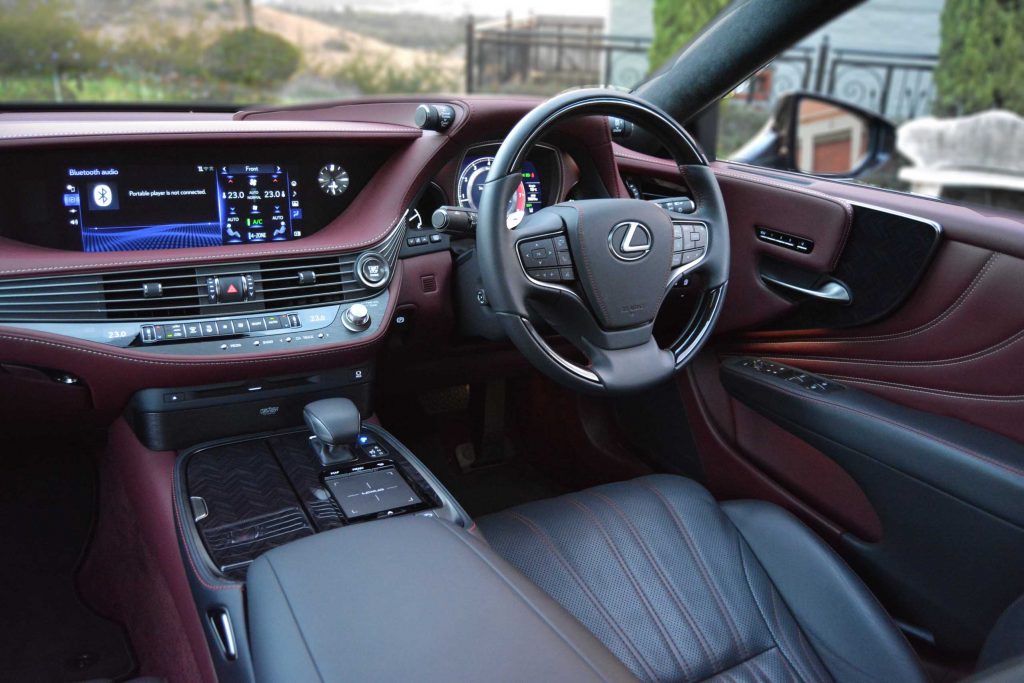 Inside, you also get the idea that the heads of the respective styling departments didn’t need much convincing to sign off on different ideas; it’s a bit of an ‘every-and anything goes’ design situation.

And mostly it works. See, the majority of the interior design elements work together seamlessly. So good, in fact, that at first glance it just provokes a simple ‘wow’. For instance; the sweeping lines. Look at it as a part of the overall design and it simply sits prettily on the interior while, in fact, it draws your attention toward specific focal points where you can find essential vehicle controls like the engine start button or the electric window console.

Or the ‘layered’ element of the cabin. It too speaks to the brilliant styling integration of different components that come together like a cake. There’s the bottom layer, the middle and the top with the details that serve as the definition icing in this metaphor. In the end, it’s not just different components, but a uniform section that we dare describe as automotive literature.

While it is all good and well, there were some areas where this design ethos slightly missed the mark. The steering wheel for one, whereas there’s nothing wrong with it as a mechanism for turning the front wheels, its design is inconsistent with the rest of the cabin. This results in an overall feeling of disconnect. It’s much the same with the digital instrument binnacle the LS shares with Lexus’ performance LC model that lights up like a Christmas tree, making it slightly-so-difficult to take it seriously as an uber-luxurious sedan.

And speaking of pure luxury, the backseats are 22-way adjustable and feature both reclining functionality and television screens. In the front, there are 28 different ways in which you can sit. And that’s excellent if you’re big on quantifying comfort, but it is the opinion of this writer that the real magic comes alive clutching the slightly disjointed-looking steering wheel and watching the digital numbers dance on the rainbow binnacle. 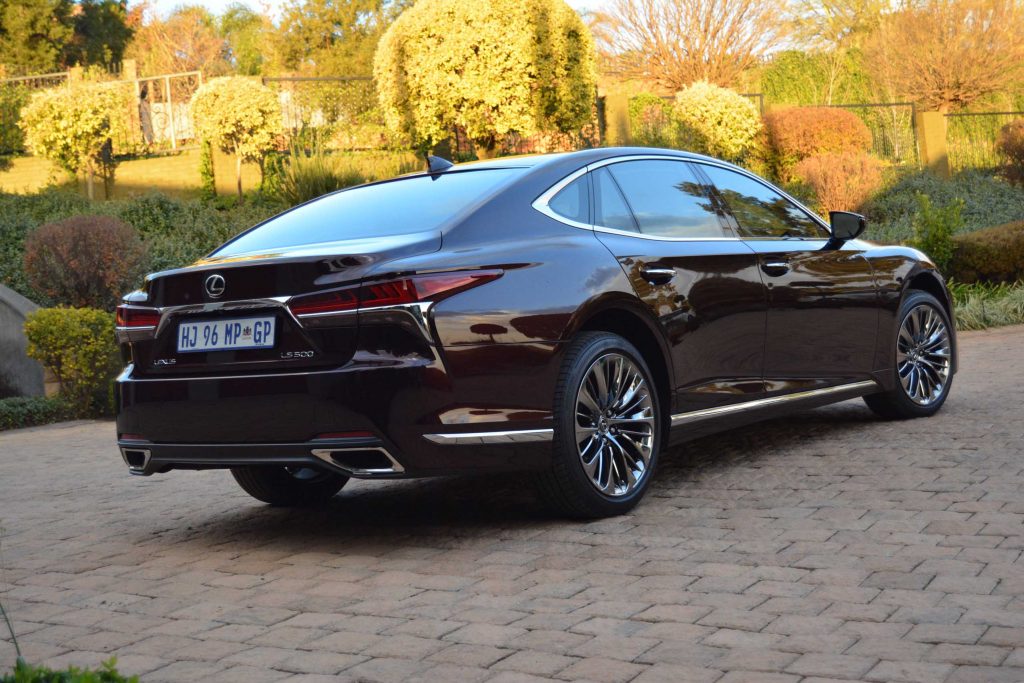 A 3.4-litre V6 twin-turbo engine that produces 310 kW and 600 Nm of torque powers the LS. Translation: it is enough to slingshot the more than five-metre-long sedan from zero to 100 km/h in just five seconds.

Testing this claim, though, creates somewhat of a strange sensation. Where normally such acceleration would be a dramatic affair with raucous exhaust notes and high-revving shrieks, the Lexus just obeys the right-footed command with a reasonably gentle nudge into the seatback and an inoffensive exhaust note that fills the cabin. There’s not even any torque jerks from the 10-speed automatic gearbox as it cogs into each gear.

Reaching the national speed limit, it’s time for the LS to settle down and commence with the cruising business at hand, and in this department, it positively shines thanks to its electronically-controlled air suspension that allows it to just glide over the road surface brushing off any irregularities on the blacktop.

Usually, at this point, the car in question is weighed up against its competitors. Things like performance, luxury, and price are taken into consideration, and we would draw a conclusion that frequently even surprises us. And, well, in the case of the LS, it’s not quite a bargain compared to its German rivals when you consider all of the above.

Luckily, it offers lots of charm and immeasurable amounts of individualism, but it’s how it manages to make you feel special — chosen even — that truly distinguishes it from the car park of German rivals. And, at R2,141,000, it better well should.