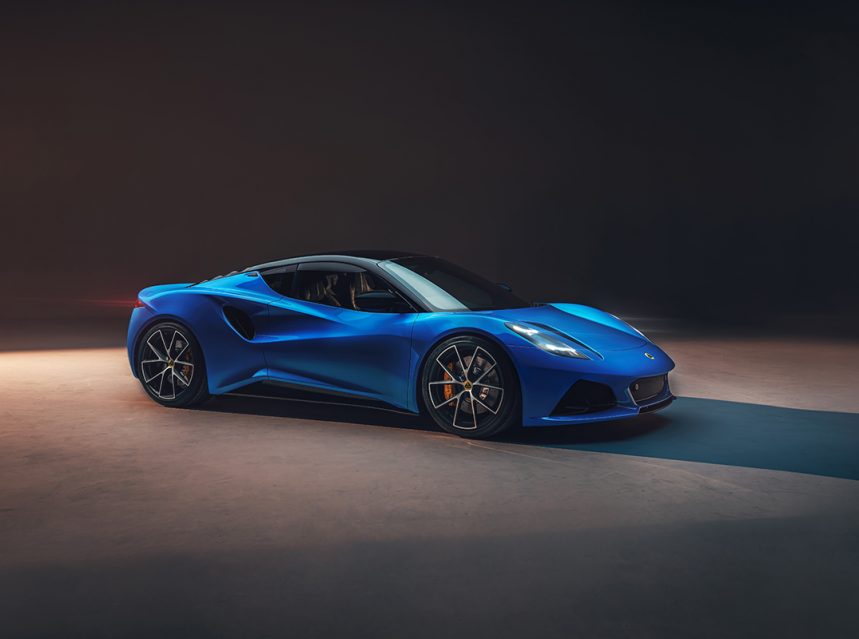 Think of Lotus and it conjures up memories and images of small, light, and superfast sports cars like the Elan, Elise, Exige and Evora, normally propelled by adapted Toyota power. Now, Hethel has introduced the Emira – the first all-new sports car under the Vision80 transformation plan and the last hurrah for internal combustion engines, supplied by AMG, in a Lotus car.

The all-new mid-engined Emira premium sports car embodies the ongoing transformation of the Lotus business and represents a quantum leap forward for the brand. Developed on a new lightweight bonded aluminium chassis, technology pioneered by Lotus, the ‘junior supercar’ is wrapped with a bold and sculpted design using cues from the recently unveiled Evija.

According to Lotus, the Emira features all the hallmarks one would expect from a Lotus – striking design, thrilling dynamic performance, best-in-class ride and handling, and outstanding aerodynamics – combined with a paradigm shift in levels of practicality, comfort, functionality and technology.

Its design, created by a team led by Lotus design director Russell Carr, integrates fluid surfaces and crisp feature lines. It features a prominent leading edge for the bonnet (housing the new Lotus roundel), a ‘shrink-wrapped’ cabin tapering to the rear, with sculpted doors and vents that cut into the muscular rear haunches.

Vertical all-LED headlamps are standard, and unique-in-class exit vents, integrated into the bonnet to guide airflow over the car, as well as the wing-inspired twin blade design are derived from the Evija. At the rear, the Lotus wordmark dominates the integrated bumper, and the flat C-shaped LED light clusters are linked by a slimline high-level brake light.

With simplicity at the core of the Emira there are no active aerodynamics. According to Lotus it is the only model in its class to create passive downforce that is precisely balanced between the axles at all speeds, perfectly tuned to the weight distribution and suspension geometry of the car to ensure constant, precise and predictable handling characteristics.

Built on the new Lotus Sports Car Architecture, the Emira has a wide track and two defined chassis and suspension settings: Tour for everyday road use, and Sports, available with the optional Lotus Drivers Pack. As standard, the Emira will be fitted with 20-inch Goodyear Eagle F1 Supersport tyres, with Michelin Pilot Sport Cup 2 optionally available with the Lotus Drivers Pack.

Also, for the first time, two engines are available, including a turbocharged 2.0-litre four-cylinder inline-4 from new technical partner AMG. Some fundamental changes were made to the powerful AMG unit (used in the Mercedes-AMG A45 series and rated for up to 265 kW and 450 Nm) for its Lotus debut, as the transverse-mounted engine delivers rear-wheel drive, necessitating changes to the air intake and exhaust system.

The second engine is the more familiar 3.5-litre Toyota V6 with Edelbrock supercharger delivering up to 321 kW and 441 Nm of torque as used in the Exige and Evora, available with a manual, automatic and Dual Clutch Transmission (DCT). At launch around mid-year 2022, the limited production ‘First Edition’ models will be available with the Toyota powerplant.

Lotus states power output across the Emira range of between 270 and 300 kW at launch, with 0-100 km/h acceleration in less than 4.5 seconds and top speeds of up to 290km/h for the car with a target weight of 1,405kg in its lightest form. Maximum torque will be 430Nm and CO2 emissions will start below 180 g/km.

Lotus has always been known for its spartan, utilitarian interiors, but the Emira represents a huge step-change across all aspects of the cabin. The wraparound dashboard creates a cosseted feeling for the driver and there are a high number of soft-trimmed surfaces, blending with modern technical finishes.

Details added in tribute to the heritage of Lotus include the positioning of the gear stick on manual cars, which echoes that of the Esprit, and the semi-exposed gear linkage visible on V6 manual cars, as on the Elise and Exige. Adding to this is a red cover over the start/stop button.

The seats have four-way electric adjustment as standard (with the option for 12-way electric adjustment), and unique to the Emira is a flat-bottomed sports steering wheel with metallic spoke detail and integrated controls. Numerous luxury features and a host of Advanced Driver Assistance Systems (ADAS) are available.

The infotainment system includes a 10.25-inch centrally mounted touchscreen, a 12.3-inch TFT driver display behind the steering wheel, and a 10-channel premium sound system from British brand KEF. Storage space includes cup holders, door bins, a glovebox, trinket tray, armrest with USB and 12 V ports, and luggage can be stored behind the seats (208 litres) or in the boot (151 litres).

Lotus sees the Emira as a truly global model, engineered to sell in all major markets around the world and retailers are now taking deposits. As an everyday sports car that sets new standards for practicality, comfort and functionality, the

Emira, with prices set to start at less than R1,3 million (before taxes and duties), also represents fair value. So, get your order in.